Deconstructing DOOL: Despite fan rage, we had a decent week in Salem 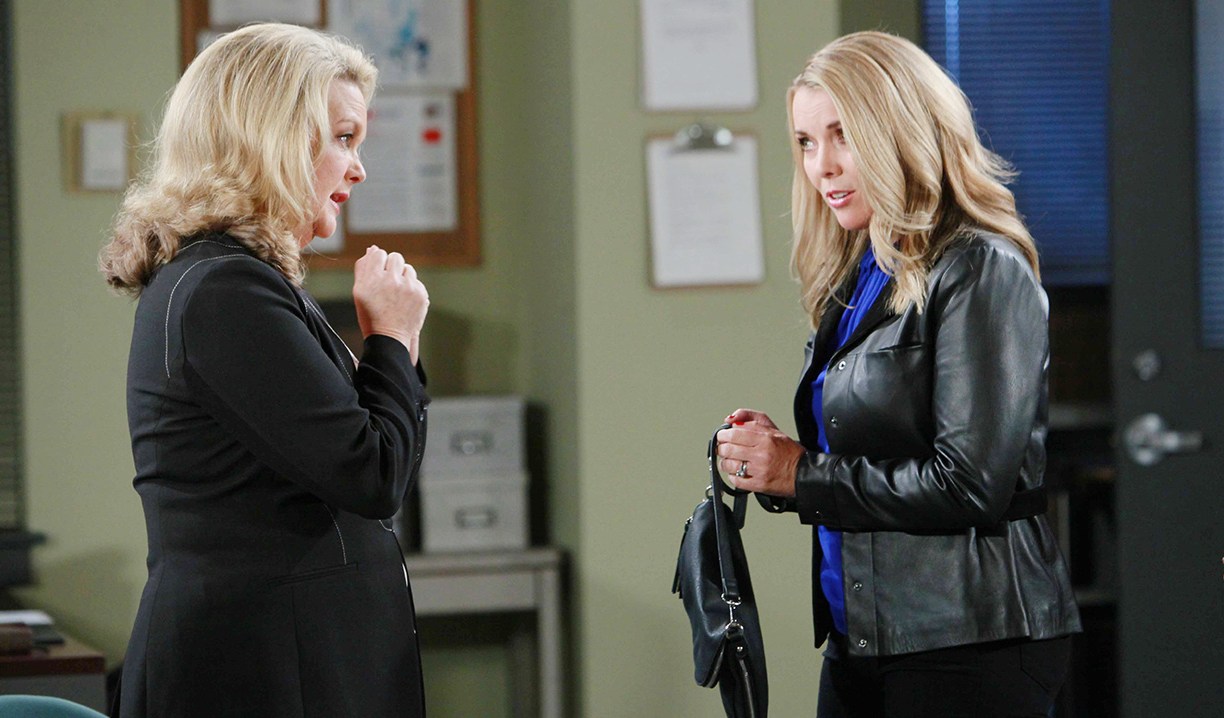 We spent time in Prague and Salem this week and found some excitement along the way. Still, some weren’t that drawn in. Austin and Carrie’s appearance was well received though it had its own issues, the villain torch was successfully passed from Victor and Stefano to Deimos and Andre, and best of all, the Kiriakis mansion has new, lovely furniture…

Carrie, Austin and Anna.
Carrie and Austin’s return was written as if they were seen the day before. There was a lot of grumbling from viewers about Austin’s turtleneck but the superficial aside, it was a disappointment that after the thirty years that Anna and Carrie were in a scene together, they had Carrie condescending to her mother. Ack. Though it seemed warranted, it was a disappointment. Last week in Deconstructing DOOL, we discussed how Nicole should check into a psych ward. Maybe she’ll take our Anna with her. Sure, Anna had a few humorous lines and it’s been great seeing her in scenes with Marlena, but dragging Tony’s ashes around and creating such a fuss about them by the end of the week made her look undignified and bat-shit crazy. Maybe there is something else in that urn she’s hiding.

Hope’s escape.
It looks like we’ve seen the last of the prison. The fan focus in this storyline is on Hattie’s hilarious ways and on raging at Rafe for blaming Shawn D for Hope’s (forced) escape. The Rafe hatred is getting worse and Corday should do something about that. To be fair, Rafe was reacting with fear. If Roman was in his place, everyone would have understood that and let it go.

@SheKnowsDOOL Hattie is really the only entertaining thing about this prison storyline. I love her!

Related: Watch a video tour of the new Days of our Lives sets and furnishings with Deidre Hall and Lauren Koslow

Alfie is Andre twist.
The biggest shocker of the year so far is the reveal that Andre was Hattie’s beau. Not only does it feel good to be surprised by “Days,” but most didn’t think there was more to Hattie’s story. Why would Andre bother and what the heck is he hiding when he mumbled to himself about Chad, “You think you know everything, don’t you? Just you wait little brother.” Is Abigail even really Abigail? Is this about the reason he helped Abigail? Hopefully we learn more soon and this doesn’t drag out. Dario grew a pair and a personality but pulling a gun on a sick and twisted, notorious murderer like Andre was a stupid move which had viewers in peals of laughter.

Andre will chew you up and spit you out Dario, back off now sweetie and have a park bench ? #Days

Deimos’ proposal.
After being in prison for 30 years, Deimos hasn’t any idea about what women want. Luring Janet from her slumber to bring a selection of diamond sparklies and putting Nicole on the spot, asking her to pick one so that the proposal could be “complete” was horridly gauche. Pitiful. I’d love to see more focus on how much this poor schlub has missed on, which could become endearing. Considering he came into (Victor’s) money two months ago and bought one diamond ring from Janet, how is it that suddenly he’s one of her best customers?

Were we expected to believe that when Brady had pains in Daniel’s heart that it was Daniel’s way, from the grave, of warning Brady not to be so free with his support of Deimos and Nicole? Lame.

Overall, fans expressed disgust over Nicole and Deimos’ engagement stating that there’s a wide gap in their ages and they’ve no chemistry. There are, of course, those who love the pairing and can’t get enough of them. To each his own.

Abigail’s return underwhelmed some.
Abby returned from the dead and when cousin Ciara saw her for the first time, she used her best monotone voice to tell Abs she already heard the news from Jenn. So instead of calling her to talk, she runs into her on the street. Who does that? And nobody else has stumbled upon her at the square or the park or TBD?

Can Gabi at least show more emotion about the man she supposedly loves and destroy the statue Chad created for Abs? It’d show some feeling. Besides, Abby was not a public figure, so why was it put in the park in the first place? The DiMeras have their own garden.

That’s all I’ve got. I’ll be back next week – please leave comments about your thoughts of what happened in Salem.

After Carrie asks Anna to stop trying to shoot people: “But what will I do with my empty life?”

Anna, “Unfortunately all the wrong people have come back. And Tony’s not one of them.”

Lt Raines, “I’m running this operation instead of Roman because I do things by the book.”

Deconstructing DOOL: Not a lot...