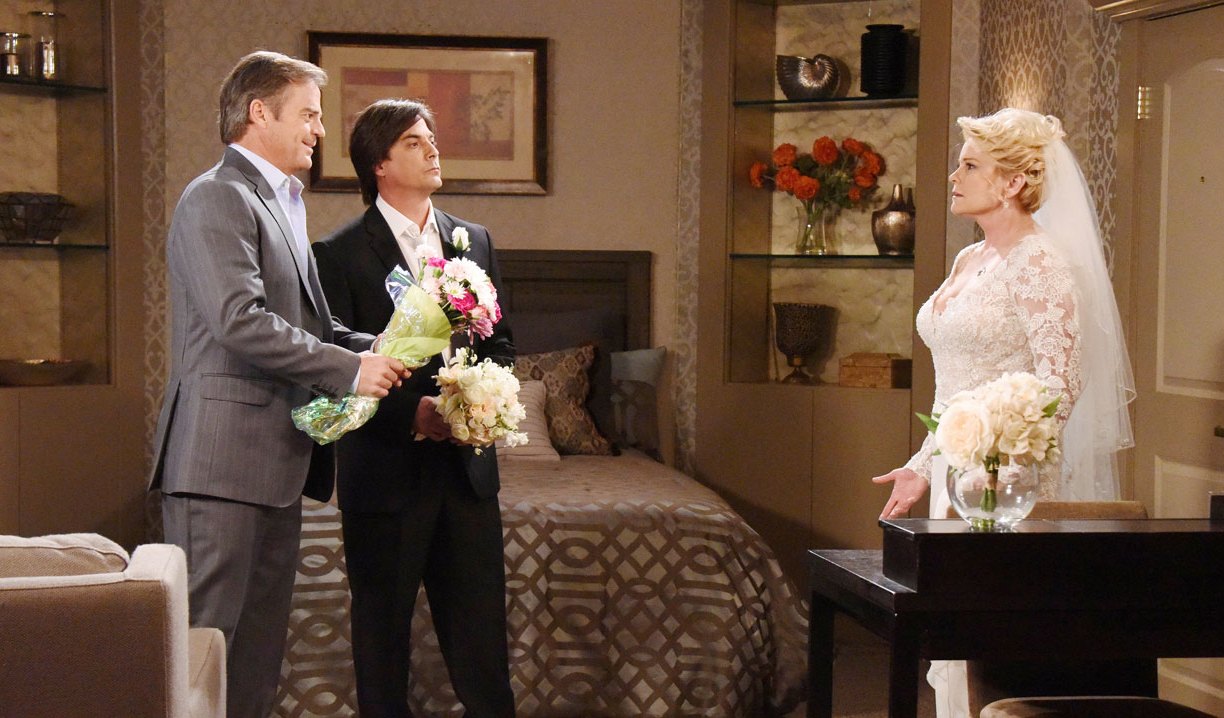 It was a short week in Salem due to the Thanksgiving holiday. Unfortunately Salem also pre-empted Thanksgiving, which it won’t celebrate until next week. While the drama at Lucas and Adrienne’s wedding was great, the teen scene remains a drag.

Three’s a crowd, not company.
Justin crashed Adrienne and Lucas’ wedding, professed his love for her, and left Adrienne not knowing what to do. Hilariously Sonny held Lucas, Adrienne and Justin hostage in a hotel room until they figured their stuff out. As a longtime fan, it was hard to watch the writers bring Justin and Adrienne back only to wreck them as a couple. Now Justin and Adrienne always had their fair share of drama and cheating back in the day, but you always rooted for them to work it out. It seemed they had, until the writers decided to wreck them, along with other fan favorites like Kayla and Steve. Some of these veteran couples just need to be left alone! With that said, I must admit I would love to see Adrienne and Justin work it out, as I never found myself a fan of Lucas and Adrienne. However, Lucas’ speech about Justin being like Adrienne’s “Sami,” something you’re addicted to but always hurts you, was on point. I put the question as to who others wanted to see Adrienne choose, and while Justin was the winner, some suggested alternate choices.

Who do you think Adrienne should choose?

@SheKnowsDOOL They way they've written this storyline? Herself.

@SheKnowsDOOL Lucas needs a new love interest! I started watching in 1991 when he just arrived as a young man out of military school?

Related: Days characters have something to be thankful for this Thanksgiving

Time to be a man, except you are still a whiney brat.
Kudos to Joey for telling his parents the truth about Jade and not dragging it out, but that’s about all the compliments I can give him. Knocking up Jade instead of dumping her is an amazing screw up, though I’m not convinced she is pregnant or it is his child. Hey, this is a soap after all. Listening to Joey whine to his parents as to how he planned to drop out of school and get a job to support Jade just made me cringe. Not only is he making more bad choices, but I find myself just not caring. He should have added relocating out of Salem, and taking Jade and her “baby” with him.

Is Abby in mourning for herself?
In last week’s Deconstructing DOOL Christine mentioned how she was already loving Marci Miller as Abigail. I concur, she’s been amazing so far. However, what is with her outfit? I get she’s supposed to be inconspicuous and in hiding, but it looks like she just came from a funeral. Maybe she’s in mourning for her own supposed death. Andre deciding to use her return to play the hero in Chad’s eyes and bring her back to him seems a stretch to me, as if Jenn or Laura talk, Chad will know Andre didn’t find Abby at all. At this point it’s just time for Abby to come out.

News: Find out which soaps are on Thanksgiving Day

JJ screws up again.
JJ’s affair with some unknown woman while he was away searching for Abby came out, and just helped tip, make that shove, Gabi further into Chad’s arms. It was good to see him learn his lesson with Eve and not try and hide his affair. I liked that he also manned up to Rafe, and that Rafe reacted like an adult and not like an overprotective brother as he has in the past. When should we expect JJ’s other woman to show up and ruin his attempt to reunite with Gabi? Come on, we all know it’s going to happen! Many fans on Twitter have already deduced the woman he slept with is likely Abe’s daughter, Lani. Good call!

The Scooby gang is on the case, but does anyone care?
Theo is convinced that Valerie is hiding something, and he along with Claire are planning to dig up some dirt on her to prove to Abe that she’s no good. Ciara has been unwillingly dragged into this drama, as have viewers. Unfortunately this storyline is a snooze just like most of theirs have been.

Knock knock! Who’s there? Knock-offs!
Steve and Paul working undercover to find out what the Hernandez family was up to reminded me of the exciting storylines of the eighties that Steve, Bo and John were often a part of. When they discovered they were shipping knock-off hand bags I was screaming, “rip that bag apart and see if anything was hidden in the lining!” Let’s do some real detective work fellas!

These are just my thoughts on this holiday week. Please share your thoughts on what went down in Salem in the comment section below. Christine will be back for next week’s blog.

Kate to Adrienne at the wedding, “This isn’t a two for one sale Adrienne. Make up your damn mind!”