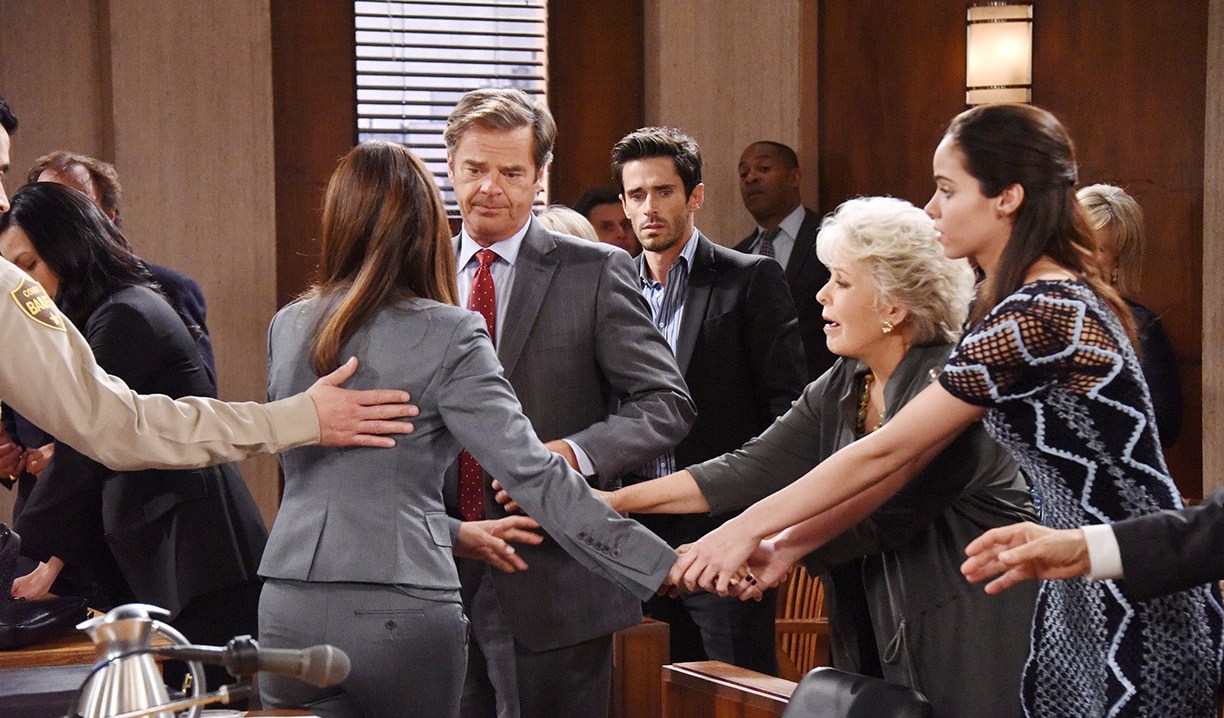 Our time in Salem this week had a good balance, we laughed, we cried, we were in shock, and sometimes even annoyed…

Hope’s plight.
I thoroughly enjoyed the explosive court room scenes this week, leading to Hope’s incarceration. I didn’t care about the storyline until then, because it’s been done far too often and always with the same end result. This time Justin went up against Trask and lost because his defense strategy was to justify the murder by using words such as ‘mentally incapacitated’ and ‘self-preservation’. I couldn’t stop cringing. Meanwhile, it was all Adrienne could do not to jump his bones, coming to his side a few times to tell him how “brilliant” he was, when his argument was the worst I’ve seen of all time. I like them together, but I loathe that those scenes were done to tell – not show – fans that she still has a thing for him. Just in time for her wedding. Lame.

I digress. Just because Marlena said that Hope ‘could have possibly had PTSD’ whilst she shot up Stefano three times, doesn’t make it so. Hope deliberately took her gun to the DiMera mansion that day, intent on getting a confession from Stefano about Bo’s torture. He besmirched Bo’s good name and taunted Hope to such an extent that she snapped and killed him. If she didn’t have her gun, he would still be alive. That said, it was fitting that he went out by being murdered by a Brady. And I respect that Hope always wanted to come clean and accept her punishment. If she didn’t let Rafe convince her of covering up her crime, things might have ended up differently.

@SheKnowsDOOL a perfect opportunity was missed today for flashbacks of Princess Gina and all of Stefano’s cruelty to Hope, Bo and the Bradys

I agreed with the punishment based on the facts of the case and felt it a shame that Hope’s family and friends are such do-gooders. They might have considered ‘pulling a Stefano’ and paying Fitzgerald off! It was irritating that Chad didn’t remember that Stefano had more grandchildren than Theo and Thomas. What about Steven (Benjy’s son), Johnny, Sydney, and Allie? And did Chad really think that Stefano being loved by his grandchildren would make him a better man? He obviously didn’t know his father. At. All. It was really good to see Shawn return for Hope’s sentencing, but I felt ripped off that we didn’t get to see his reaction to her admission of murder. I can’t wait until Hope’s life gets back some normalcy and her only issues are her terrible cooking.

Jenn, the hypocrite.
Last week Jennifer was angry over how The Spectator reported “distastefully,” she said, on Hope’s arrest. Then she bought the paper and instead of reporting on the news without bias, the way that I had assumed at the time that she would have preferred, she wrote an opinion piece of all things, whining about how Hope didn’t get justice for murdering Stefano. *mic drop*

Nu-Abby already.
“Days” recast Abigail with Marci Miller who is already killing it with her portrayal, making her very believable as Abigail. Even her reasons for leaving Salem made me care for her.

Alice’s sofa has seen some shit.
Was it not enough that Chase raped Ciara on Alice’s sofa? Now JJ had to confess to cheating on Gabi on and then tell it to her face, right on that sofa? I wouldn’t mind seeing less of the living room and perhaps more of the kitchen for a time… That sofa has PTSD…

No need to screen test. We’ll wing it!
In an interview with James Reynolds about Abe’s new love interest, Valerie, he admitted that when Vanessa Williams was hired, they had no screen testing. How disturbing. How many times do you figure this has happened? Can we get a list going?

The wedding didn’t have a chance.
That was some non-wedding. With all of the mishaps, and then Sonny, the best man, stabbing Lucas in the back telling his father to go after his mother on her wedding day, then Joey blurting out his baby news and Justin crashing the wedding. Not a dull moment! I’m having a hard time staying angry with Sonny, knowing that his loyalties lie with his parents and that he understands that love and life is fleeting, but poor Lucas.

Next week should be interesting!

Goodbye…for now?
Last week in Deconstructing DOOL we talked about Theresa and Brady’s anguished storyline. Many fans wanted to end it already, finding it “the worst exit storyline” they’d ever seen. I loved it myself. This week she finally left, with poor Brady reeling and Tate, motherless. One of the silver linings was seeing Shane and Kim together, and Victor’s tender goodbye.

Does this mean Jen Lilley is gone permanently? What about the photo of her with Meredith (Anne) holding their scripts?

That’s all this week. Please share your thoughts on this week in Salem in the comment section below. Next week I’m on holiday so Dustin Cushman will be filling in.

Andre, “This town will have a brand new villain. This time it will not be a DiMera.”

Kate to Lucas, “I hope it’s not a sign.” Lucas says, “A sign of what? Too much inbreeding?”