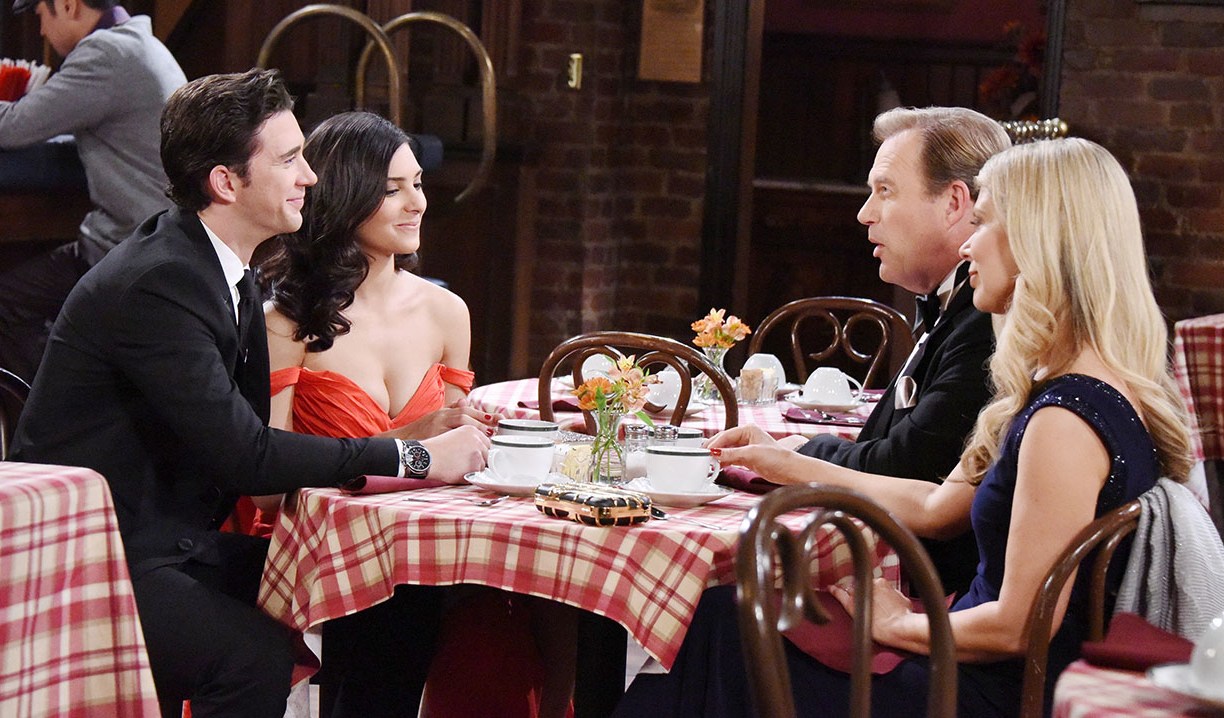 The week was satisfyingly full of romance, passion, betrayal, and intrigue, but the continuous propping of characters was ever present. Last week in Deconstructing DOOL I bitched and whined and was borderline rude. I cringe when I think of it but sometimes things just have to be said…Onward!

Could we be seeing Sami and Lucas’ daughter soon?
With Annalisa Cochrane booking a role on Days as “Alyssa,” it could be possible that she’s actually Allie. If it’s true, please make her a bad girl. We’re sorely in need. Oddly, we’re also missing one demographic in 30 somethings on the soap. It was painfully obvious watching Joey and Claire discuss him wimping out on dumping Jade and sending Claire to do his dirty work.

I wonder how Jade’s pregnancy fits in…

Hey mum…have I got a story for you…
JJ and Jennifer are no strangers to discussing his extremely personal affairs (Eve cough cough) but it doesn’t mean it’s any less awkward to see it happening again. It would have made more of an impact and more sense if JJ awoke from his coma calling out to Gabi with an apology which prompted Rory – not Jennifer, to question him. As for the cheating, while I know that asinine saying, “once a cheater always a cheater” is BS, it oddly came as no surprise that he cheated again. Even to Jenn. I’m not sure I care to be blunt, only because this couple hasn’t had much time on canvas together for me to invest in them. They’ve great chemistry, I like them both but I also like Gabi and Chad. Of course, this comes just in time for Abigail’s return.

Should Gabi forgive JJ if he tells her the truth that he cheated? #DAYS

Hopefully there is more to this drunken one-nighter that JJ’s not telling us. Maybe we know the woman. Or maybe was this done to prop Chad and Gabi? Either way, I almost didn’t want him to tell Gabi. It’s just so hurtful.

@SheKnowsDOOL It’s ok. He said the last thing he remember is drinking and then he woke up naked. Obviously something unsavory happened 🙁 — Elie (@MeElectra) November 8, 2016

Did Gabi take things too far with Chad?
When Gabi was helping Chad with his business deal by making out with him, all I saw was their chemistry and a fun storyline, but in hindsight, what she did wasn’t necessary and was something JJ would approve of. Two wrongs don’t make a right. Brad and Vicky were entertaining. I hope we get to see them again – especially since we need a freak like Vicky on the show now that Nicole’s sober, boring and Samanther’s gone. But perhaps this whole storyline was only written to prop Chad and Gabi. We’ll see.

Theresa began her descent into Mateo’s world.
Jen Lilley’s performance showing anguish at Theresa pushing Brady away has been resplendent. Eric Martsolf did a fantastic job as well and Brady’s pain and willingness to stand by her was exceedingly romantic.

Weirdest line: Brady to Theresa, “You are my wife. You are the mother of my son.” No, Brady, she’s not your wife. Stop saying so. At least JJ has a little intel that he could discuss with Brady when the time comes.

Arrogance never works for anyone except a DiMera.
After murdering Stefano, somehow it has never occurred to Hope or Rafe, detectives, that Hope could get the death penalty. Seriously?

I shocked myself by siding with Andre, not Marlena, when she called him despicable for exposing Hope publicly. Since Hope murdered his father it felt as though all bets were off. She’s lucky he didn’t attempt to kidnap, torture or kill her. What did Doc expect from Andre DiMera for goodness sake? Why she even gave him the time of day is beyond me. All I could remember was Melaswen during that scene!

Kate’s continued talk of forgiveness is freaking me out. She’s not sick again, is she? This is the second time she spoke of forgiveness. Surely she can’t think that the people of Salem will forgive and forget all of Andre’s countless wrongdoings?

Shell creeper.
Gabi, Sonny, Paul and Chad visiting JJ with party hats and an Xbox was one of the best scenes of the week just for the sheer fun. Jenn Jenn was true to form, showing her rigidity, calling out the “kids” for being immature because they were playing video games. Then to top it off, she got everyone beer…I love it.

@SheKnowsDOOL Is drinking beer right after a gunshot wound and pain meds in the bloodstream a good idea, Jenn? — Denice (@DlishDenice) November 11, 2016

This is an opinion piece. Please share your own in the comments!

Victor to Brady about Theresa’s odd behaviour, “I’m sorry. So so sorry.”

What’s Behind the Big Shuffle Among TV News Executives?

The Circle Season 2 Premiere Recap: Plenty of Catfish in the Sea (Grade It!)