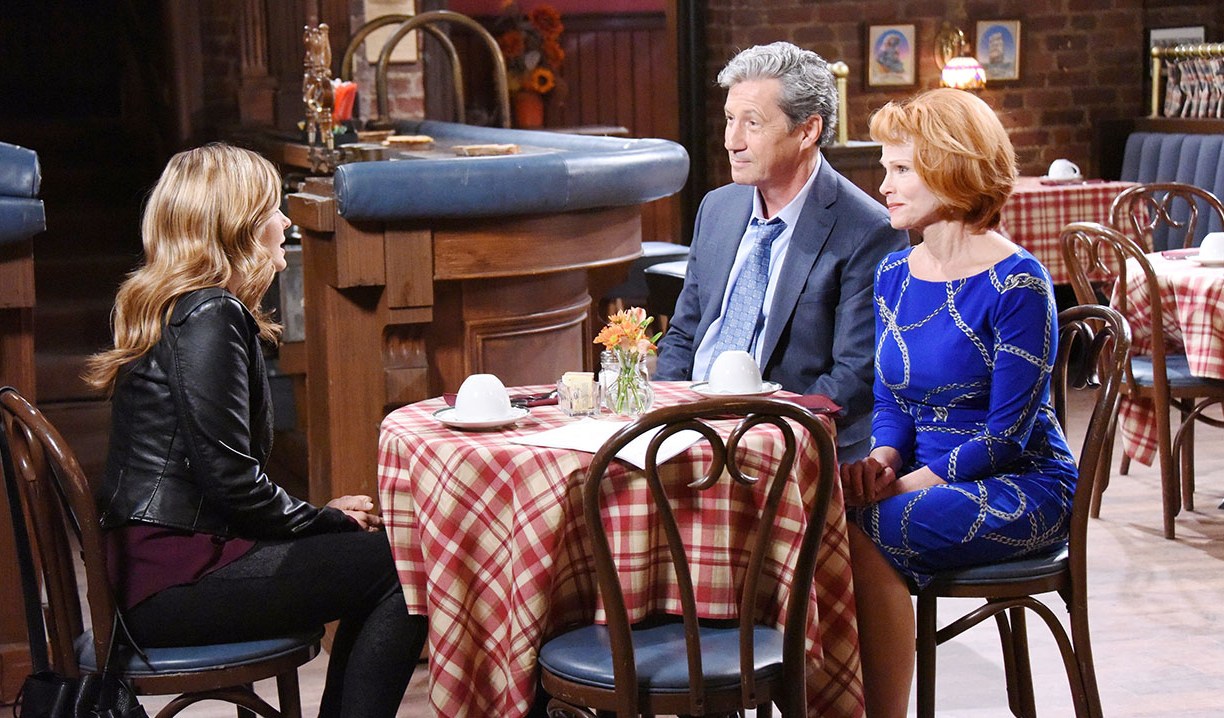 I had the most difficult time writing my blog this week. I couldn’t figure out the reason behind the block until this morning when I read your opinions. Once I was honest with myself, I realized that though I’m enjoying “Days” lately, way more than I have in several months, I have to credit 85% of that to nostalgia. Nostalgia can only go so far and this week, though I did find the show interesting and enjoyable, because I adore “Days,” I am also sick to death of the recycled storylines. I’m tired of finding plot holes and angry that the new co-head writers seem stuck on pairing the wrong characters together to further whatever personal agenda they have, I’m wary of the constant returns of past fan favourites that won’t fix this show. I’m tired of justifying it by saying, “Well it is a soap, so…” I know it isn’t easy to write for soaps, but at the risk of being rude to the powers that be – and this goes for all four remaining soaps, it appears to the viewers that you’re lazy and relying on the so called ‘tried and true’ methods of writing. Honestly, they need to change with the times and start writing for 2016. This is not 1980. This is 2016 when I’d rather watch “WestWorld” than any of our beloved soaps. It fills me with dread and guilt to say so.

This should not be your mother’s soap.

Orpheus’ finale.
Like a bad guy in an episode of “Scooby-Doo” Orpheus revealed step-by-step how he cheated death while he prepared to burn Kayla and Marlena alive in coffins. Coffins, might I add, that were made from the slowest burning wood I’ve ever seen… At any rate, his return was both funny, pathetic and far-fetched, but so is “Days,” so it was fitting.

We haven’t seen John since he burst through the door with Steve to save Marlena and Kayla, which could mean that it was the scene that caused his injury. But since nobody at the studio is talking, and none of the actors involved, I guess we’ll never find out anything more than we know now. That’s the soap industry. Ask no questions and they’ll tell you no lies.

The White Knight came off too strong.
I can appreciate that Rafe’s need to protect the woman he loves by any means necessary, but this week at SPD it came off as controlling. Hope is not a child, nor is she some ingenue. It would have been the perfect time for Hope to assert herself. As a cop, a mother and a capable woman over the age of 50, she’s no damsel in distress so I wish they’d stop trying to fit her into that dreadful mold.

#DAYS is trying to portray Rafe as Hope’s protector but he comes across as her master. Please stop letting Hope bend to this man.

Arresting developments.
Chad’s reaction to Hope’s confession was understated yet worked. When Chad approached Rafe, feeling betrayed by someone he thought of as a friend, Rafe should have just taken it and apologized instead of giving an analogy of how the situation was similar to that of Ben and Abigail’s, pointing out how people react when pushed to the brink. Sure it’s an excellent point but the timing was off. Sometimes it’s best to shut up.

Nancy’s too brief yet satisfying return.
Patrika Darbo, in less than two minutes, reminded us of how feisty Nancy is, how much the show needs her. What’s funny is Deimos isn’t even the father, so he sort of looks like a fool now, barking up the wrong tree.

Shane’s brief return left fans wanting more.
I love that Shane is the one who returned to Salem in disguise in order to warn Theresa of impending doom. I didn’t even mind that the show created a new backstory for her, because it was never revealed exactly what naughtiness she got up to before she moved to Salem. I love that she turned to Victor of all people for help and that though he could do nothing, he wasn’t happy about what was about to go down. What I think could happen is that she’ll alienate Brady, take off and then Mateo will be killed and she’ll return. But that’s just speculation.

My only beef with this storyline – the look of Mateo doesn’t work for me. I like the actor but I would have preferred Mateo younger and hotter. I just can’t see Theresa falling for this guy.

The Spectator.
This is a fantastic way to bring back The Spectator, having Jennifer and Adrienne buy it. This warms the hearts of those who loved Jack, and could provide Nicole with a new job. It also looks like a way to bring Adrienne in Justin’s orbit more – will he stop Lucas and Adrienne’s wedding?

Even from beyond the grave Dr. Dan gets his own storyline.
Fans are divided on the surrogate storyline and I’m on the fence. While the reveal was something we all speculated on, the story itself was an interesting twist. On the less than positive side, it’s outlandish considering Daniel’s been dead for almost a year, and a little annoying that precious Dr. Dan is still getting huge storylines after his death while Bo’s name has barely escaped the Brady family’s lips.

We didn’t get the Ejole baby storyline that some of us wanted but at least Nicole gets what she always wanted, a baby. That endears me to the story, but do we believe Chloe will reveal the truth or will she try to protect the child from Deimos?

Mother Theresa herself wouldn’t have forgiven Deimos this fast!
Last week in Deconstructing DOOL, I was angry that they had Victor claiming he doesn’t hold his brother Deimos responsible for Bo’s death because he allegedly didn’t know who Bo was. Nope, not even while Deimos was staring at all of the photos he had of each member of the Brady/Kiriakis family did he know who any of them were. Did somebody forget this backstory already? Seriously it’s as lame as it gets. This week we get to see Maggie walking, finally, and seconds later, she gave Deimos, the man who poisoned and paralyzed her, and stole have her husband’s money, advice on how to get into Nicole’s good graces. WTF “Days.” That is not remotely believable. Deimos needs some other motherly figure to dispense advice, not the woman he tried to kill. It’s way too soon to forget what he did. If I was a regular viewer I might have stopped watching for good after that scene. That’s how much it pissed me off. Deimos could be a wonderful complex character but this writing simply ruins him for me. That too pisses me off.

This is an opinion piece. Please share yours in the comments.

“How dare you desecrate Daniel’s memory with that man,” Chloe tells Nicole.