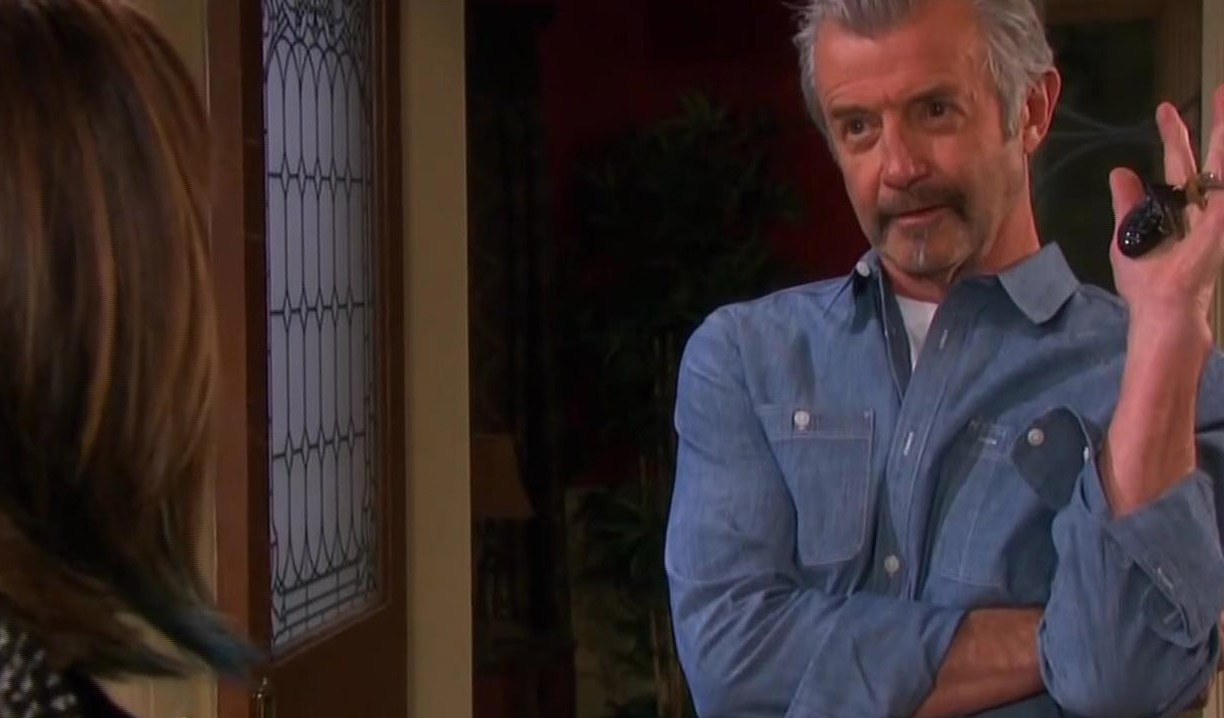 It was an exciting week in Salem, filled with things that go bump in the night… like sinister escapees wielding guns!

Orpheus saved Brady & Theresa’s wedding.
Brady and Theresa have been planning their wedding for months. Months. She busted her rump to create a gorgeous gown for this momentous occasion, yet a few days before they mentioned getting married in a civil service at the court house. Eh? So she’s been stressing over a quickie ceremony at the court house. Seriously? And she didn’t stress at all when they suddenly arranged to have the wedding at the Kiriakis mansion? She’s really backwards. And that was just the beginning. No woman in her right mind would ever drink anything that wasn’t water in her gown, yet she downed some Coke, which was hilarious considering how utterly unbelievable it looked. At least we saw Eve back, and bonding with her backwards sister. She looked great. Everyone looked lovely except my Nicole who was put into a horrendous orange mumu with the worst hairstyle. She’s young and gorgeous and it’d be nice to showcase that!

Considering Jen Lilley’s leaving the show as Theresa, has anyone else thought we might see Nicole and Brady back together? Isn’t that what their shared moment over Eric’s prison letter and Daniel’s death was outside TBD?

Orpheus taking the hostages was the best part of the entire fiasco, right down to his lines. And keep in mind that I didn’t watch the show during his heyday.

One highlight of the week: Eve’s reaction to learning that Nicole was once married to Victor. Give me more of these two girls hanging out, getting to know each other!

Sayonara Gabi and JJ, we’re not sure we want you as a couple, now!
This couple had great promise, great chemistry and could have been the next supercouple but nope. It’s looking as though “Days” wants to trash them before we barely got to know them, by throwing Gabi in Chad’s arms and making JJ act like Victor’s clone, throwing out old-fashioned thoughts about her new job as a DiMera being ‘too dangerous’. Meanwhile he’s a cop! Dare I mention the sudden self-righteousness? That’s Jenn Jenn’s fault, but blaming EJ for what happened between the sheets with him and Abby – it’s a shame JJ isn’t above this. Oh well. At least Chad and Gabi have chemistry, and having her with Chad when Abigail returns could provide more drama. But then what about his amazing chemistry with Belle? She’s only leaving for a short while and it doesn’t look as though Belle and Shawn are anywhere near to being to each other what they once were, even though their goodbye had more emotion in it than this couple has had for each other this entire return.

Related: EJ’s penchant for bouncing back from shootings…until the end

Claire is one stubborn kid.
Abe should have ordered Claire to get her ass home, instead of allowing her to hang out alone at TBD, knowing she has a link to John Black and that Orpheus was out there on the hunt. That scene made me crazy, and I’m not even a mother!

You want to catch an escapee and you don’t station a cop with his two main targets? Classic Salem PD. #Days — Melissa V. (@mrsmelissa99) September 15, 2016

Aiden’s getting more delusional, which could be fun until it’s not.
Aiden once again surprised me and entertained me because of his delusions where Hope’s concerned. Even Chase, the rapist, thinks his father is cuckoo. Just look at that photo. This father and son scene left me wondering where this will eventually leave Aiden.

This is an opinion piece. Please feel free to share your own!

Orpheus, “I survived by sheer force of will.”
Marlena, “And yet, you still wound up in prison.”

Orpheus after watching Maggie stand up from her wheelchair: “She’s healed.”
Maggie plops back down. “Maybe not.”

Rafe to Kate: “You can call if you need anything.”
Kate, “Oh yeah, I’ll call if I’m still alive.”

Victor to Philip: “Why am I not surprised that you knocked up that slut?”

1883 Trailer: The Duttons Stake a Claim in the Old West in Yellowstone Prequel