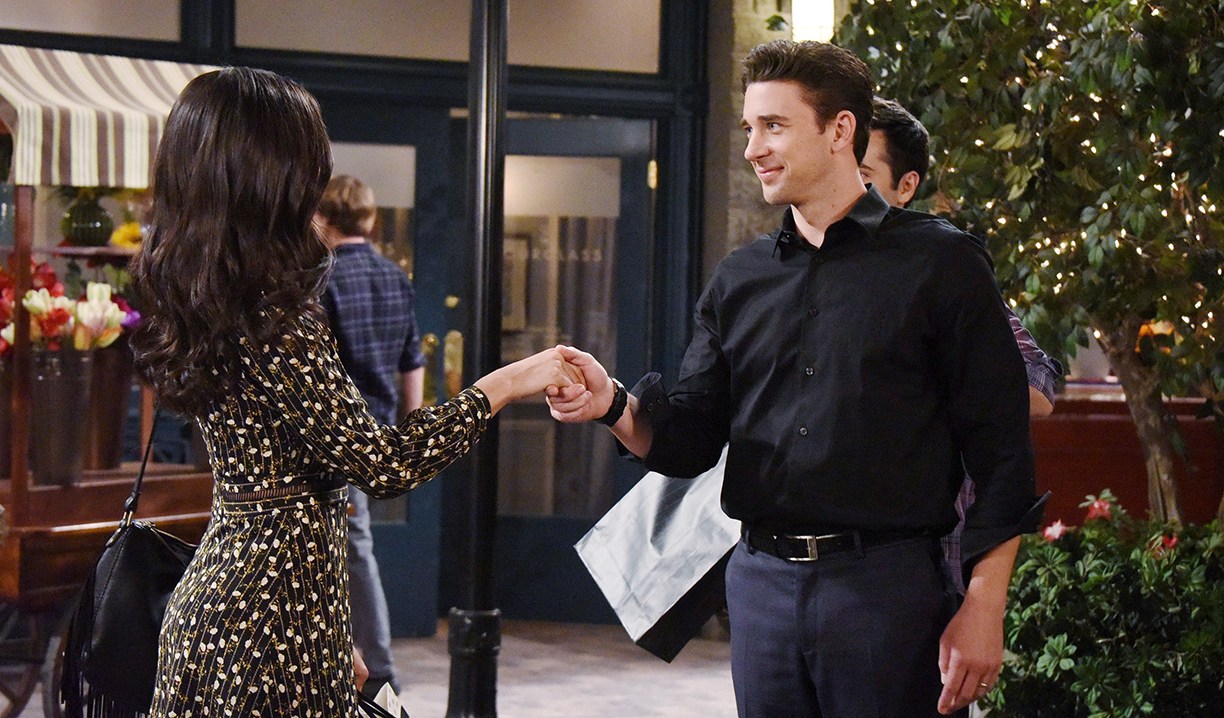 I loved our time in Salem this week and have some rants, some raves and a prediction. Let’s get right to it!

Orpheus sounds like another word I know starting with the letter O.
I didn’t know Orpheus (Milo Heart) because I started watching “Days” in ’94 as most of you know. I read his bio, and watched him in a few YouTube videos in the past so I know he’s dangerous. That being said, his name is hilarious. Orpheus? Did the writers mean for us to think of the word ‘orifice’ and one in particular when we thought of him? Anyway, sure it’s kind of silly how they all happened upon each other and though they’re almost talking in riddles half the time, it’s obvious Clyde’s goading them into taking revenge so he can have his. Gotta appreciate that close-talking Clyde’s the instigator, showing that he’s still deserving of more respect than some of us (I) gave him when he came to Salem from Poplar Bluff!

Shocker, nobody saw coming. Kate’s the Tatenapper.
At one point I thought Theresa was the culprit but it was too obvious and nothing added up. Though I didn’t see this one coming, Kate being the kidnapper sure covers all bases. It’s not like Kate hasn’t done some nasty things in her life! It’s a bit of a juicy twist, though it happened so fast. I had a huge headache Thursday while watching/recapping so I found the discussion about how Deimos and Victor learned the truth to be convoluted. I get that Titus Drew videotaped the exchange but the talk about ‘Betsy’ and hookers didn’t compute. I may have to watch that again! My theory of what will happen: They’ll use Theresa as the fall guy, Theresa will go to prison, and Nicole will comfort Brady and they’ll get back together. That’s based on Thursday’s episode. Once Theresa’s out of prison, there’ll be a triangle. Some say they’ll use Chloe or Anne. Good possibilities.

Thoughts on Kate being the Tatenapper? (POLL) #DAYS

@SheKnowsDOOL That was my theory as well

JJ’s return.
Not that we ever get to see much of JJ or JJ with Gabi, because their story hasn’t been told yet it’s good he’s back now, even though we learned he left as an afterthought a few days prior. Because we didn’t see Gabi pining for JJ, I found their argument to be manufactured and Gabi annoyed me, when I should have been more understanding of her. That’s what happens when they rush storylines. ‘Judge’ Julie annoyed me in this episode too, telling JJ to dump Gabi for being upset that he didn’t call. What kind of advice is that, especially coming from the matriarch of the show? I love Julie but she ‘ain’t no’ Alice!

What’s with protecting Maggie?
Not a fan of the old boys club meaning Deimos and Victor, leaving the little woman, Maggie, at home so they could discuss who the real kidnapper was. I found that disrespectful and it made Maggie look weak when she’s anything but. With all due respect, can we please move on from that 50s style of writing? It only pisses modern women off.

Favourite BFF scenes.
I loved Chad and Sonny’s scenes though would have liked to see Sonny smile more. It’s good to be reminded that they’re BFFs. I also enjoyed Eve’s return. It’s heartwarming to see Eve’s so happy that her sister finally got her shit together, the way she always wanted. My favorite scene might have been the bachelorette party at TBD with the threesome. I only wish it lasted longer and that Anne didn’t have to be in Brooklyn with her ill mama. I guess that’s how they’ll explain her absence if we don’t see her for a while. Another favourite scene was Adrienne and Steve! I love that he could humanize himself and admit to his sis that he’s been a ‘freakfest’ lately and that she actually conked him on the head and called him a ‘big dummy’. Give us more of that! Did anyone else notice that Chad has chemistry with Gabi, Belle and even Sonny? Just like Nicole! I’m not sure who I want him with, but it sure is fun to watch! Abby who?

Steve and Adrienne finally have a scene together after more than a year. Praise Jesus. #Days

My feelings about Laura Horton changed on a dime.
I loved Laura Horton in the past. Jaime Lyn Bauer really gives the role her all and Laura was intriguing. Last week I was glad Laura Horton returned to Salem, glad that she diagnosed Abigail as being PTSD, which makes sense, but after a few days I was glad the door hit her backside on her way out. I couldn’t believe how rude she was to Chad and found myself cheering on Kate to take Dr. Self-righteous down a few pegs. It was Marlena’s suggestion that Chad commit Abigail to Shady Hills, not Chad’s. Funny how all Laura had to slam Kate with was the tired old ‘Oh yeah? Well you were a prostitute three hundred years ago’ routine. Yawn. Nobody cares about that. Like those shoulder pads, that comeback should go back where it belongs. In the 80s. This is Kate. There’s so many better things to slam her with! Truly, I’d love Laura back fulltime just to see the back and forth.

PTSD, I like it. Thanks to Laura from wrapping up that terrible Abigail’s crazy now storyline up in a nutshell! #DAYS @SheKnowsDOOL

@SheKnowsDOOL I was thinking Laura is still crazy!! WTH! Kate’s no saint but damn.

My thoughts for the week – please leave me a few comments on my thoughts or on the week or both, and for those who were offended by my use of the ‘s’ word, I really do apologize. It really just fit so well.

Chad to Sonny, “Not that you would know anything about going straight.”

Laura, “Ever since you married the old spider [Stefano], yourself?”

Victor to Kate, “You were upset that the Kiriakis gravy train was coming to an end and wanted us to neutralize each other.”

Clyde, “Look up smug in the dictionary and you’ll find a picture of Marlena Evans. Even when she’s smiling she looks like she smelled something bad.”

Orpheus, “I want to wipe that smile off her face with Agent Black watching.”