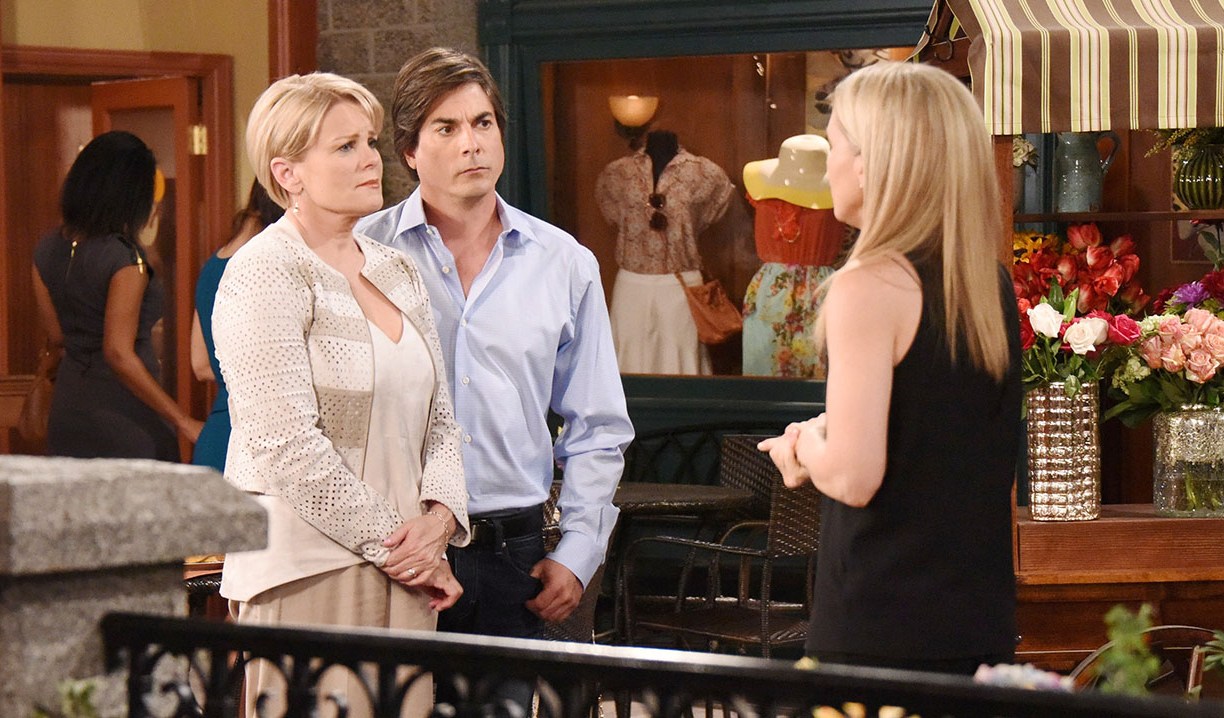 This was a good week of “Days” viewing. Chloe had a secret, so of course, now half of Salem knows, Kate gave us some classic old school soapiness, Sonny remained his bitter new self, while Jenn and Chad finally came to a really off-the-wall arrangement with regards to Thomas’ care. There are a few rants, a few raves and as usual, I’m anxious to hear your own thoughts on the week.

Classic soapy goodness.
We were reminded of how obtuse Chloe can be when it took her a while to figure out who could have possibly told Deimos that she was pregnant. Hehe. How much fun was it to see Kate faking a call to Deimos, pretending to be Chloe’s obstetrician? I don’t care if she’s in her 60s. It was very old school soapy and fun. It reminded me of the time she faked being a chamber maid in order to drug Sami and put her in Brandon’s bed the night before her marriage to Lucas. So bad!

I really loved that Chloe and Nicole agreed to keep each other’s secrets, and agreeing to disagree, reminding us that they’re still good friends. I did find it a little strange that Deimos hired Dario to spy on Chloe when Dario’s loyalty lies with Nicole. If Dario learns Chloe’s pregnant with Deimos’ kid, he’d probably consider telling Nicole first, in the hopes that she’d dump Deimos.

This isn’t the Sonny we want to see.
The last few weeks I complained about Sonny’s return to Days, and how he’s supposed to be a changed (bitter) man now, but as the weeks go on, the more it doesn’t suit the character or the actor. This week I found Sonny’s lack of a reaction to Abigail’s death a huge letdown. I know he has never used a lot of facial expression to begin with but Abigail was his friend and Will’s bestie. It seems to me no matter how bitter he was feeling that he’d be devastated over her presumed death. To me, this was a slap in the face.

The big bad DiMera!
Other than lying to Abigail a few years ago about having a brain tumour, Chad’s been a pretty decent man and father so it’s difficult to make sense of why Jennifer feels the need to protect Thomas from him. Is it really just because he’s Stefano’s son and that he lives in a mansion that needs an exorcism? It was equally perplexing when Lucas told Jenn that Chad deserved another chance. What did Chad do that would require another chance? Am I missing something? Does this have to do with how Chad treated Abigail while she was with Ben? Jennifer and Chad’s argument at the mansion really held my interest. It was so intense, so well done, that it actually pissed me off. Jenn Jenn couldn’t think of any insults to slam him with other than to stammer out, “You’re a DiMera,” which was hysterical, not only because Jennifer’s kind and even toned, and doesn’t really know how to “Sami” things up, but because she’s telling him that as a DiMera, he’s supposed to be a criminal, yet he’s not even using any of the dirt he has on her in their custody fight. Boy was I glad to see this fight come to an end, but how odd that they would give Thomas to Adrienne and Lucas. Why on earth does Jennifer insist that widowers can’t take care of their kids? Who writes this stuff? That’s rhetorical. Of course I know, but oh my gawd it’s ridiculous.  At least Laura’s back.

Dario’s long, drawn out storyline.
I love that Gabi’s attacker found her and told her he didn’t want anything to do with her family. The scene was a nice surprise and for me, humorous. Eduardo’s exit was heart-warming though I admit I don’t care if he’s gone or not, but how is it that he got a goodbye storyline (as the actor moves to recurring) and other more popular characters get zip?

Hopefully they’ll stop telling this story in monthly increments and get to the point.

This Dario thing is SO 90’s Sami, if she had zero charm. #days

Blanca is still around?
What was the point to that random scene at TBD where Blanca, who hasn’t been seen in weeks, just swanned into TBD for a five second scene saying hello to Dario? It looks like another example of the show hiring a good actress, starting into a good storyline and then dropping it and her, and focusing on using those who need an acting coach. Same with Mama Hernandez. Days just let go of Alma Delfina, one of the best actresses they have on the show. But Ciara’s still there. WTF?

Rory sighting.
Uh it’s really nice to see Rory again but I can’t figure out what the scene between him and Ciara was about. And because he was last seen selling that horrible drug to Deimos, is he really still our sweet, innocent, weed-smokin’, Scooby-snack-eatin Rory? Or is he someone darker?

The Tatenapper, spoiled… not here.
I won’t spill here the name of Tate’s kidnapper, but I will say I was shocked to the core, but think it makes sense. I am letdown that the show leaked this before anyone could watch, considering people would have been glued to their TVs on the day of the big reveal. Maybe they think the opposite, that this will lure them into watching.

Chloe to Nicole about men like Deimos: “Men like him don’t change. They morph into different forms and continue to use and take.”

Back from the break & loving DA...