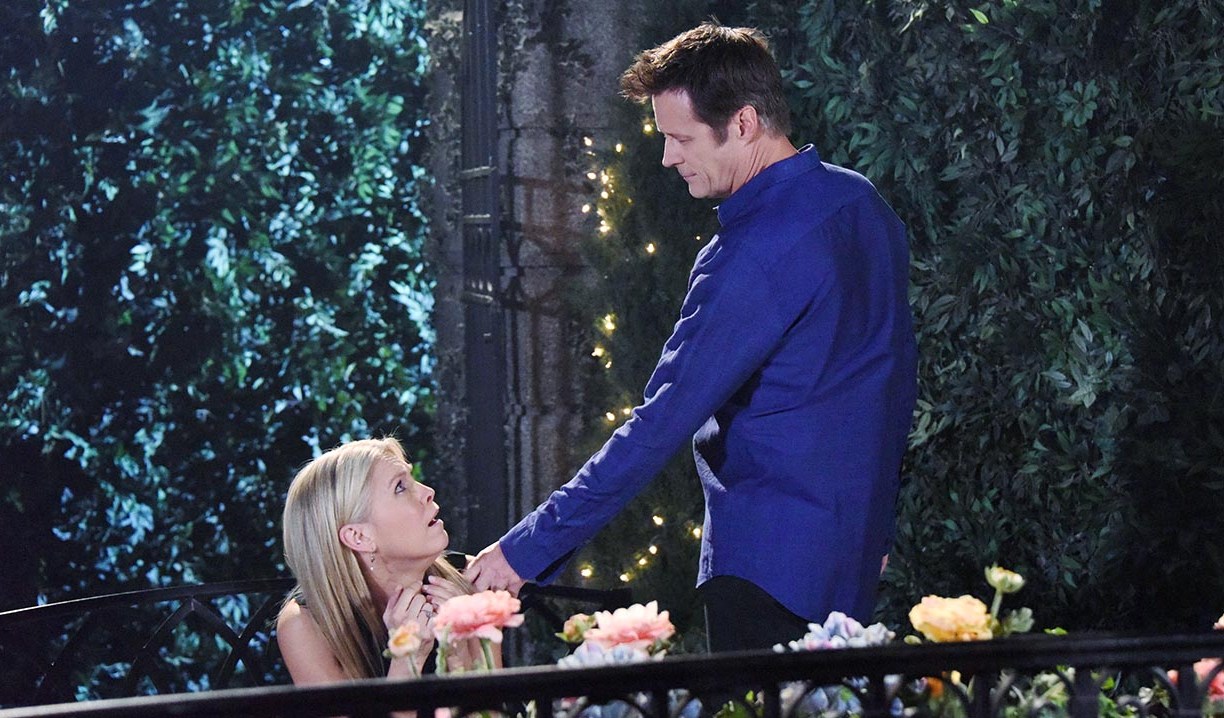 We were given four big reveals and one fake one before the show went on hiatus today. It’ll be gone for 2 whole weeks – oh the horrors! One of my wishes is for the younger couples to be used more often.

Deimos’s proposal.
I know I’m in the minority here but Deimos’ piano playing does nothing for me. He’s a decent pianist and the first time he played it was fantastic all around but it’s become a cliché. Besides, music was Stefano’s shtick. I find Deimos intriguing, charismatic, handsome and seemingly intelligent but he and Nicole aged 30 years for me in those scenes. It’s understandable that Nicole is attracted to him but it’s not understandable that she would consider his marriage proposal when she five minutes before, told him he doesn’t know her (truth) and then agreed with Chloe a few minutes later that he could be playing her. I’m so over this tired “I’m so drawn to you and can’t stay away” crap, too. It’s called sexual chemistry. One does not marry every person they have chemistry with.

Chloe’s pregnancy.
Not only am I once again annoyed that for the third time, Nicole and Chloe are sharing a man, but now Eeyore’s pregnant with Deimos’ child and the way she’s handling it is pathetic. I guess her life is over. I mean like she said, she’s “no Kelly Clarkson.” And only Kelly Clarkson can work while having babies. Chloe elected not to tell Deimos about the pregnancy because it turned out so well for her the last time. What do you think will happen? Will she pass it off as PhillyK’s or since Nicole’s no stranger to faking a pregnancy, she could try her hand at that again and Chloe could go away, have her kid and return to give it to Nicole. It’d be a much more compelling storyline if Chloe aborted the child and then grieved over her choice so we could grieve along with her and discover the ramifications of an abortion in soaps in 2016. But that won’t happen because we’re always denied.

And does Chloe really need an assistant?

Dario revealed. In one of the biggest twists we’ve seen that wasn’t spoiled in advance, Dario’s behind Eduardo’s threatening notes! How scathing! What a great reveal. I admit I was a little excited to see where this will go, especially because this is how they wrote Ben our Necktie Killer at first. Boring, then a little nasty and then boom, he was a psycho. They even work at the same club. Café. Club. Whatever.

@SheKnowsDOOL I was guessing Dario because Eduardo found them at TBD ? — Terri Lynn (@TerriB63) August 3, 2016

Custody of Thomas.
I loved the scene with Belle entering the DiMera mansion and upon seeing Chad sitting on the floor in week old clothes, looking rumbled, looks him up and down and says, “You’re going to have to help yourself first or she’s going to have a strong case.”
Chad, “I don’t know what that means.”
Case. In. Point.

And then moments later, Jenn Jenn finds an old stash of pain medication of all places in the baby nursery that she told us that Abigail prepared for Thomas. I’m shaking my head!

So Chad showered, shaved and dressed so that he could “show” the judge that he’s a good father. Cause that’s all it takes. Why hasn’t Belle suggested a mediator to discuss the possibility of sharing custody at least until Chad gets back up on his feet or until Abby returns or until he marries little Ciara? Or, Jenn Jenn could move in with Chad. That’s actually hilarious.

Paul and Sonny.
As I wrote last week, Sonny’s homecoming was heartwarming, and it was nice to see him together with Paul and to hear Sonny discussing his loss over Will’s death, but it would have had way more impact if that scene happened months ago. Has anyone else noticed Sonny seems ‘off’? Friday’s cliffhanger:
Since we already know Abby’s being recast and that Andre faked her death, watching everyone grieve over her demise was a complete bore. What I did enjoy was Belle and Chad’s chemistry and Jack’s return, which was amusing and loving. I’m not sure how to feel about Aiden taking over as DA, but at least we know why he’s still there at all. The rest? Boring. At least we got a Lucas and Adrienne sighting.

Have a great weekend and find me on Twitter to discuss the show after the Olympics!

“You should take your hocus pocus suspicions and keep them to yourself.”

Roman to Adriana, “You know, Rafe didn’t tell me you were so… you were so.”
Adriana, “Bitchy?”
Roman, “Feisty. I was gonna say feisty.”

Adriana, “That’s like thanking the person who pulls you out of the shark tank after she throws you in, in the first place!”

Back from the break & loving DA...