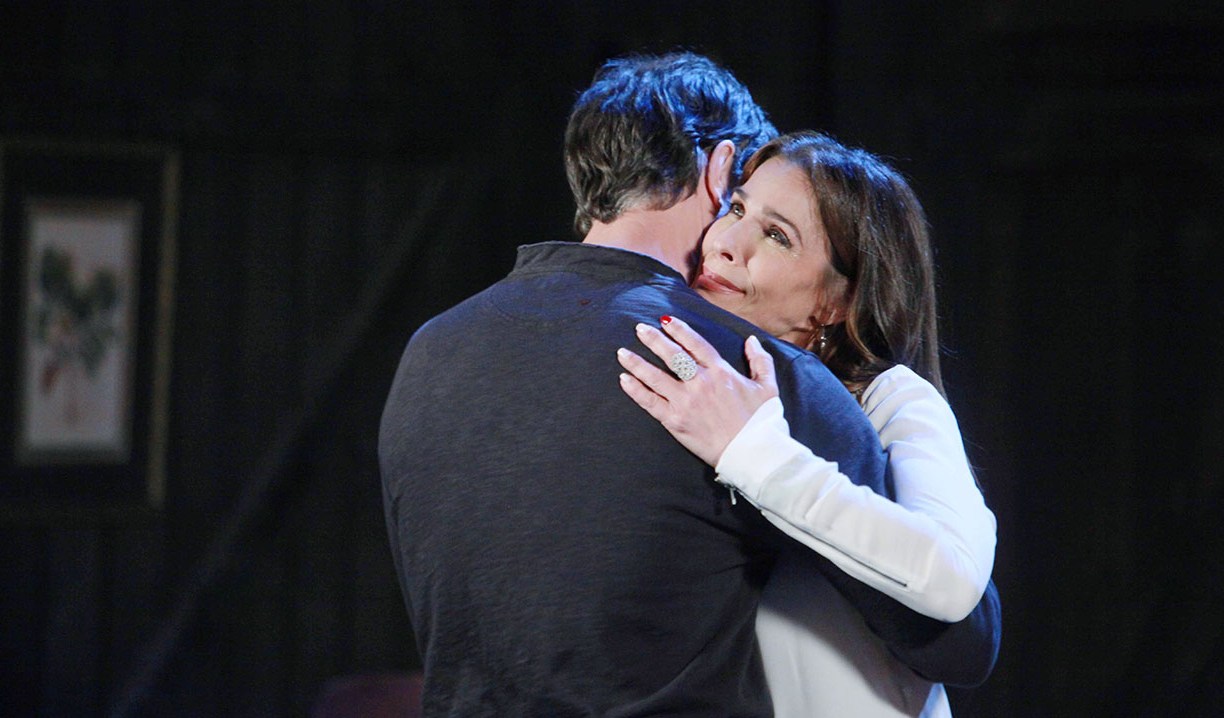 The week saw some powerful dialogue, a big dose of romance, and…flashbacks that brought on minor headaches.

Hope’s standalone episode.
I think those who don’t watch daily or those who never liked Bo and Hope together might have vomited through the entire episode and that would be understandable but… I liked it. I admit I was a sucker for the sappiness, Bope dancing to their song, Tonight I Celebrate My Love, not a “Days” ‘original’ song. Though it was nice to see Bo, it was bitter sweet. I almost felt letdown after. Teased. Now that Blanca is in the picture, I assumed Hope would choose Aiden – and she did, days later. Stefano’s appearance helped a little toward getting rid of those conflicting feelings some of us had for Hope not paying for her crime of murder. I think I’m ready to redeem her now that Hope and Stefano made that corny truce! I didn’t watch during Larry Welch’s heyday but I read enough to know he was a huge part of Hope’s past and appreciated his return. I wish I had seen the show back in the 80s. I had mixed feelings about SORASd Zack’s appearance which was bizarre and sweet at the same time. With one eyebrow raised some of us asked, um… do we age after death?! Can we call Zack SORASed or not? Would it have been weirder if they had a kid show up? Haha!

The real question on my mind when she returned to Salem was did she remember to take the eggs and milk from the fridge at the cabin before she left?

JeanLou from the “Days” message board says, “The guy playing Zack out-acted most of the teenagers on the show today with the exception of Theo. Wish he was on Days in one of their roles, he was genuine and adorable. However, how come he aged up there? That makes zero sense but the guy playing Larry aged too so at least they’re consistent.”

@SheKnowsDOOL He isn’t really SORASed though is he? He’d be a teenager by now, wouldn’t he? ?

@SheKnowsDOOL The only part of the episode at I DIDN’T like. #zack #days — Susan Ockene (@bluejayseh) June 8, 2016

@SheKnowsDOOL Dead spirit-Zach was instantly more interesting than any of the living teens currently on the show.

@SheKnowsDOOL All told, so far, it seems to be a way of exonerating her (to the fans) for the murder of Stefano.

I’m already enamoured.
Rafe met Blanca, his mother’s friend, and unexpectedly, she was young and pretty. In the five seconds they met, I saw loads of chemistry. Of course the day after, he was unceremoniously dumped by Hope and is free to move on – yes even though he’s still in love with Hope, because that, my friends, is how “Days” writes “love stories.” I’m a little disgusted with the whole thing right now but am interested in your views.

Joey:
In Dustin’s soapbox last week he said, “Joey comes off more as a whiny boy band member following a girl around like a love sick puppy.” Preach! The whining is not a good look on him, but his whole ordeal with Jade and the commune might have been good for him. It makes me wonder if we’ve seen the last of Jade. Kayla validated those of us who loathe Simone by exploding and giving her the tongue-lashing of her life. That was a highlight of the week.

Dr. Fynn out, Dr. Cooper in.
Though Alexander Bruszt was only meant to be on screen 13 weeks, he stayed well beyond that, even though the writers never did much with him. Now on the heels of Alexander Bruszt being let go on Days, the show is casting for Dr. Caleb Cooper, a doc who will be seen next year. It’s a shame about Fynn, though I only really started to like him when he realized that Steve and Kayla were meant to be together and stepped aside. It was very appealing.

@SheKnowsDOOL He was cute, but to be fair, we knew he wasn’t staying from the get go. #DontLetTheDoorHitYouOnYourWayOut

Deluded Dario.
Dario professed to be in love with Nicole, though they’ve only ever been shown in a handful of episodes together. WTH? If I do the math, their time together enjoying coffee and clam chowder works out to be about 10 minutes together tops. I’d buy that he’s infatuated. She’s gorgeous. But he’s not in love. It was hilarious that five minutes after he admitted he ‘loves’ Nic, he shagged Summer! Oy. I think she’s more his speed. How lame was it when Dario gave Nicole an umbrella in the writers’ attempt at making the scene romantic?

@SheKnowsDOOL These writers have a terrible habit if telling instead of showing. — Husbands for life. (@hpcharmed) June 7, 2016

How is it possible Deimos could understand Nicole more than she understands herself when he met her five seconds ago and knows zero about her?
This is another case of the show ‘telling’ vs ‘showing’ us the story. It’s pathetic and pisses me off. The only interesting bit I found in this entire scene, in this entire storyline, is that Roman doesn’t believe a word coming out of Kate’s lying mouth and Deimos reminding us – including Nicole – of who she once was before Daniel came along.

“You would have been bored in six months of marrying him. Having dinner on the table for hubby when he came home for work. The two of you sitting together on the couch watching the latest dance competition on TV…” Nicole claimed that sounded wonderful but he has a point. It sounds incredibly boring. Then he told her, “That isn’t you, Nicole, and you know it. You settled. You become the woman everyone thought you should be. You were living a lie and you’re still living it and for what? For Maggie? For Victor? Would hurting me help her walk again? Help him become a better man?”

On one hand I wanted to tell Deimos off for purporting to know what Nicole wants in life, especially since he barely knows her. But he made so many excellent points that I wonder if this will prompt Nic to consider his words and go back to being the martini-sipping bad girl.

On Friday, Chloe returned and we learned that Deimos has an alias and knows Chloe, but how does “Robert” know Chloe if he’s been in prison for 30 years? Honestly I’m just not that interested though it’s nice to see Chloe.

What’s up with Kate?
I’ve been noticing these past few weeks that Kate’s been acting a little out of character, at least for the Kate of today, but orchestrating it to look like Nic murdered Deimos was…there are no words. It had to hurt for her to watch Deimos profess his love for Nicole, but she did see this coming, so I have issues feeling sorry for her. Plus, who knew she was falling for him? We’re not mind readers. Who isn’t discontented from playing guessing games with our characters? I loved how she was muttering to herself before Roman got on the scene, trying to get her story straight, and loved that Roman was skeptical, but I don’t love that Kate’s backsliding into old behaviour.

What are your thoughts about the column and “Days” this week? Leave me a few comments and visit me on Twitter! I follow anyone who asks and love to dish on the show.

Kate to Nicole, “Well that was a waste of a perfectly good martini.”

Deconstructing DOOL: It's been an...