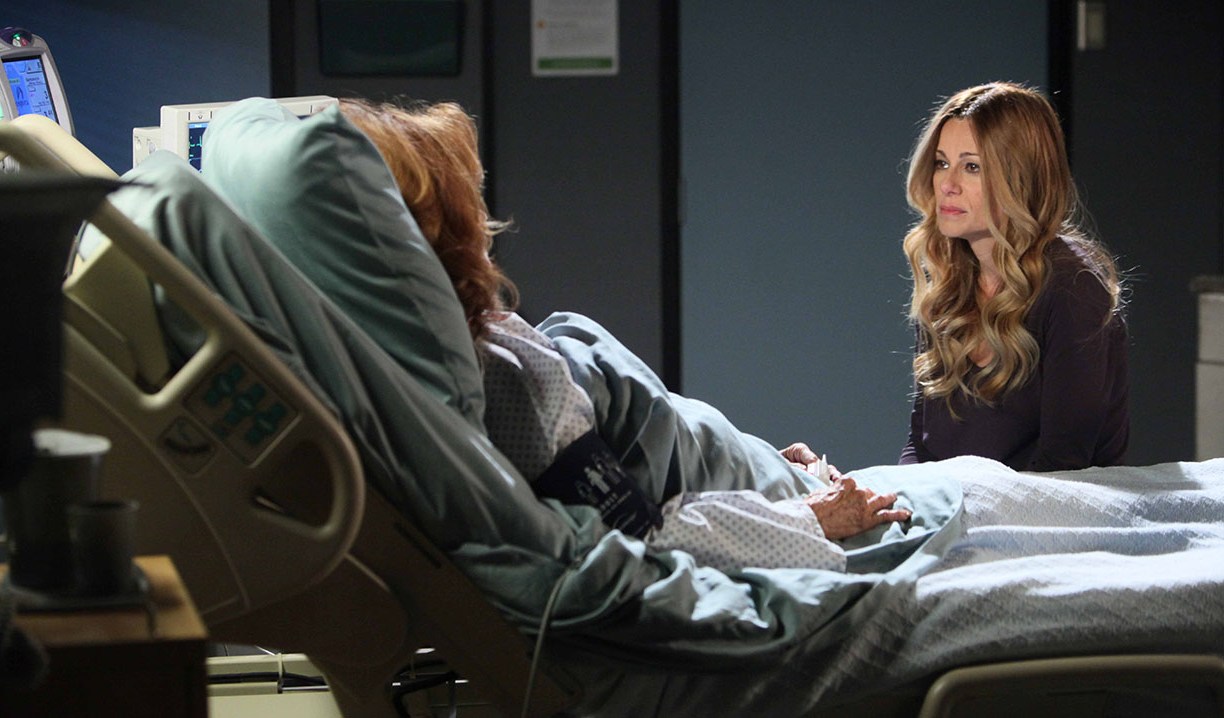 It’s interesting to see the plots interconnect lately but having to wait an entire week to see one plot’s progress brings us out of the story. We’ve had so much excitement, even though it’s been bleak, that many fans are actually going from being depressed to bored during some episodes. Could it be possible that we’re becoming excitement junkies despite our rants about the melancholy surrounding Salemites?!

Did we miss something?
One of my Twitter pals reminded me that Kayla was to go in front of the Ethics Board before Ava kidnapped her, but nothing was said about it since. Did the writers forget? Did you forget?!

@SheKnowsDOOL Did I miss something, or are we just supposed to forget Kayla’s in trouble and missed her hearing with the ethics board?!

Steve walks!
Boy that was a shocker… The boys in blue couldn’t get their pal Steve off so the writers came up with a convoluted story for the director of the ISA to make sure Steve doesn’t go to prison. Though I don’t want Steve in prison, I’m really just wary of consequences not mattering. It’s easy to lose any ounce of respect we may have had for SPD when they keep this up. Kayla dumping Steve was at first a slap across the face for many, including me, but I can’t disregard a mother wanting to protect her child. That being said, by now, doesn’t Kay know that it really doesn’t make a difference? If somebody wanted to harm Steve’s family, they would. If she really wants to protect him she’d take off for parts unknown. At least he stopped himself from getting involved in that poor woman Tina’s mess. What a bizarre scene.

Who wants to bet Kayla dumping Steve is short lived now that she’s of course got something wrong with her? Gee I wonder if it’s life-threatening? Everything is in Salem. I hope they aren’t killing Kayla off.

Jade: “Can I take a sandwich for the road?”
How about that Jade? What a bloody weirdo! And you know me, I love the weirdos. She’s colourful, funny, pushy, spunky, and I find it refreshing. Hopefully she’s not a nutcase who will blabber about Joey murdering Ava if there’s a falling out.

Kate’s interesting behavior.
Kate’s been looking for a “better man” these days. Dare I say that just about any man is better than the ones she’s been involved with? Aside from Roman… Oh wait. Is Roman a bad guy or good guy?! Eduardo might be better suited than Deimos the Devil though I’m not sure he’s rich enough or powerful enough for her. Deimos with Kate is fun but he might drink a little too much of the crazy juice even for her.

Primetime! Grey’s Anatomy Recap: Meredith finds herself in the middle of Owen’s feud with Riggs

As it turns out, Nicole is Helena’s look-alike. Here’s a photo I snapped during the show that El Diablo was holding. Now that she knows, what’s Nic going to do with this information? Will she stay away from him or are we looking at a moth to the flame scenario?

Deimos was looking at this photo. Looks like Nic Nic to me. Could it be Helena? #DAYS pic.twitter.com/ykFNqcKsVc

The transition.
Theresa’s not the only one with major changes to her life that some are finding hard to stomach. Now that Nicole has bonded with Maggie and saved Victor’s life, there seems to be some transformation coming to her life, too. Victor thanked her for saving his life and actually cautioned her against being anywhere near Deimos. I admit I’m a sap and loved that scene, though I hope he doesn’t stop snarking off about her. It’d be fun if she gave as good as she got and that deep down they finally had a mutual respect.

Maggie’s admission.
Did I hear correctly? Maggie knew her kid wasn’t dead and made up that whole story when she’s the one who gave Summer up for adoption? Is anyone else reeling from this? Maggie’s been sweet, kind, and nosy but she’s never been a big fat liar! What is going on in Salem? Is there a problem with their water supply? Are they in Melaswen? Is black white and white black?

The Necktie Killer returns. For real!
After days of Abigail feeling as though she’s going crazy and us never knowing if she’s seeing the real Ben or not, he finally showed up. I assumed he wanted to kill her and take Thomas but he wants her back.The mind of a psycho…I understand this is the last straw with Abby, but she’s no killer. Her mental stability is already in question and I worry that she’s going to follow through and burn Ben and really head into a downward spiral. What’s with “Days” making normal civilians murderers? Hope, Joey and now Abby’s heading there?

Chase is out?
Last Friday’s Deconstructing DOOL we wondered who bailed Chase out of jail. He explained that he gets an allowance from his trust fund and used it all to get himself out. That was a bit of a letdown since I thought this had something to do with Daniel Cosgrove’s return. Now that Chase is back in jail, will we see him again?

There you have my thoughts on this week. I’d love to hear your own thoughts. Leave a comment and find me on Twitter!

Brady, “Something tells me that this thing is going to go from bad to worse.” I hope that isn’t foreshadowing “Days” new episodes…

Victor to Nicole, “You saved my life. That can’t be right.”

Kay to Steve, “Trouble doesn’t just follow you, you court it.”

Deconstructing DOOL: Could this have...