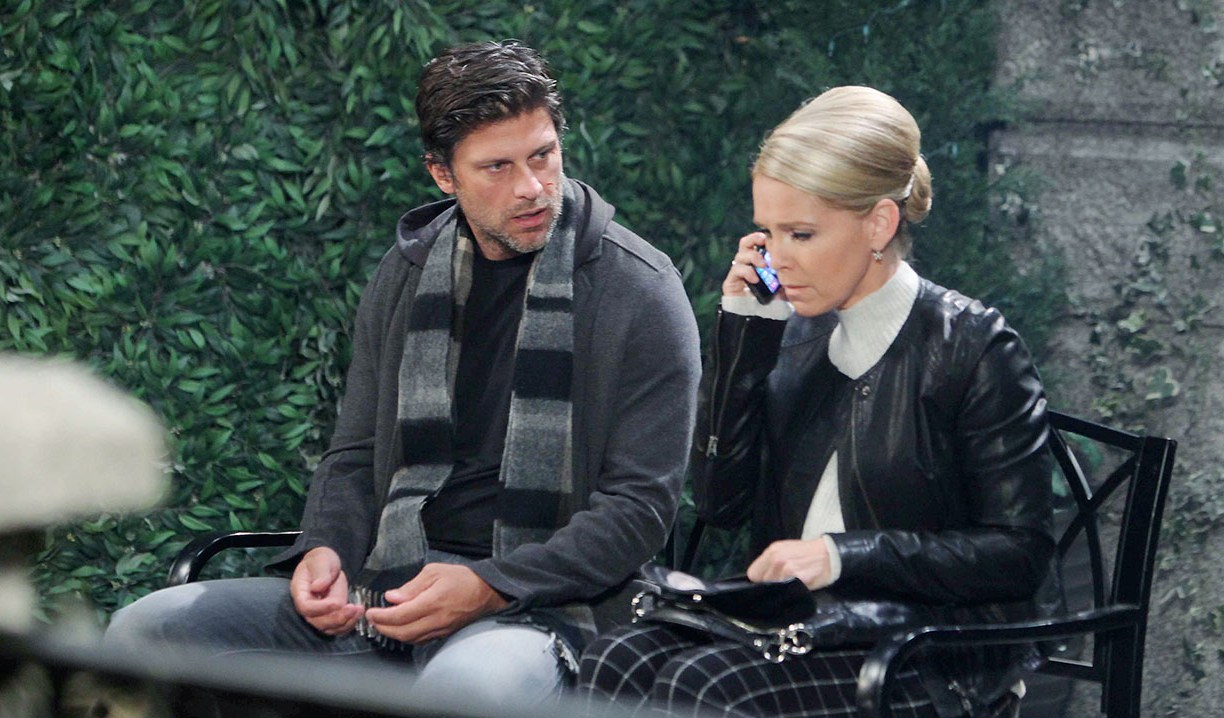 It wasn’t my favourite week visiting Salem. The focus was all over the place, the teen scene was overkill, and the parenting left a lot to be desired.

Expect the unexpected.
Why on earth would Stefano have a mortgage when clearly he’s worth 250 million dollars in cash alone? Even after the income tax back pay he’s still worth millions. I had to dig deep to find this believable. Mostly I’m happy the writers tried to spin things so that Chad could buy DiMera mansion and we can still keep it as a set even though Stefano’s (may he rest in peace) dead. Because the mansion means a lot to me, I’ll go with it. It’ll take some guts for Abigail to live at the House of Usher considering it has such a rich history of bedlam. Maybe Abigail isn’t privy to the murder, torture, kidnappings and brainwashing that happened mostly before she was born. That’s a good thing.

WTH is a kick back?
I kept wondering why the hell Ciara didn’t call her “kick back” a party until I showed up and fell asleep. It’s sad that even Joey crashing the party drunk didn’t make it exciting. Gone are the days of the Last Blast Dance, Ghoul Girl and Jan Spears. Are teenagers really this boring these days? And why the hell did Hope clean up for them afterward? Who does that?

Last week in Deconstructing “DOOL” we touched upon Claire interfering in her parents’ marriage. This week, Ciara did the honours and showed that strength we saw in her as a child when she told Claire basically to shut it and let her parents ruin their own lives. How refreshing. Still, I find it hard to believe that Ciara would play matchmaker for her mother especially after all that has happened with Hope and Aiden and Hope and Bo just a few short weeks ago. Maybe she should take her own advice and let nature take its course.

And Chase? It’d be easier all around if he let go of the attraction to his almost-sister. Because we’ve seen them together as kids, their parents were married, and they’ve lived together for a while, it’s just a little creepy.

Was he grounded at least?
I didn’t hear Steve ground Joey for drinking under-age and I didn’t see where he forced his son to clean up the broken glass in the park that he left from smashing his bottle. Great parenting. I’m going to blame psycho Ava for some of this considering it’s her fault the kid is so screwed up.

Poor Chloe.
In every scene that we’ve watched with Chloe and Parker in it, I can’t help but feel embarrassed for Chloe, who doesn’t appear to be much more than a babysitter to her son. Nicole seems to know how to parent better and Parker listens to Nicole over his own mother every time.

Ain’t that the truth!
A poster in the Soaps.com Days message board named Daysforever, posted this: “Kate Roberts has been made the official Welcome Wagon Lady for just about every new man who sets his Florsheims in Salem.” Hilarious. And true! I swear as soon as she heard Deimos’ last name she was in heat.

A final goodbye to Daniel.
Daniel’s memorial was quite touching. It was much longer than the other vets deaths such as Bo or Will which was offensive to many fans. Even those not fond of Bo. That says a lot. Be that as it may, the shrine was poignant. Nobody else got a shrine because they weren’t as well known as Daniel. The most heartbreaking thing about it for me since I’m over Daniel’s death was seeing Eric’s pain and guilt written all over his face while walking by the shrine. He’s a prisoner of his own thoughts. How does somebody get over that? I admit I’m a little peeved that Nicole lost not only Daniel but Eric, too. WTF? When will she catch a break? The highlight of the week was when she suggested to Theresa that they ditch Kate and open their own label.

A shrine?? Bo, a former cop who was tortured for a year and he gets nothing? I’m not even a huge Bo fan but this is hard to take. #DAYS

#DAYS Look them honour Daniel Jonas better than Bo Brady Brady the real hero our hero.??⏳ @nbcdays I am very disappointed and disgusted ??⏳

Heels and back pain don’t go hand in hand.
Earth to Jenn: Wearing spiked heels after a back injury is the worst thing you could do. That and downing an entire bottle of pain pills in less than a week. It’s sort of ironic that she was chasing Eric around Salem, urging him to go to AA when she herself seems to be facing some addiction issues. At least Jenn called Lucas and not Aunt Maggie. We needed a Lucas sighting and he had some great advice.

Horton cabin.
What refreshing scenes after a long winter filled with depression, murder and pandemonium. Rafe can’t bait his fishing hook, Chase gets skunked, and Ciara snooped into Chase’s phone and found…what we assume is incriminating evidence that he’s Theo’s bully. This isn’t a spoiler but we’re all thinking it!

If you haven’t already read, here’s this year’s Daytime Emmy pre-noms. There are a several outright shockers.

That’s the dish this week. I’ve been enjoying your comments – please feel free to leave a few this week and say hello on my Days Twitter account.

Steve to Ava, “Ava baby. I would rather dig out my good eye with a spoon than ever be with you again.”

Deconstructing DOOL: There were...