Deconstructing DOOL: There were plenty of WTH moments on Days this week 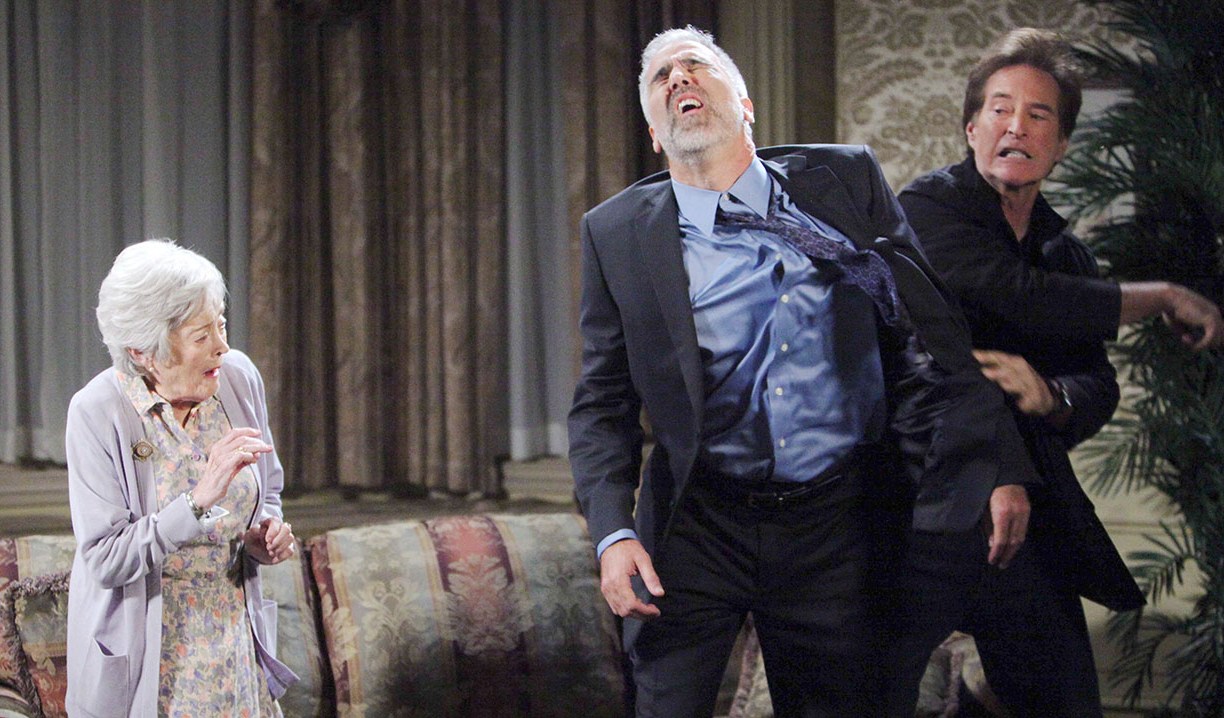 Lots to dish on this week. We’re talking about suspending disbelief, choices, rebound relationships and murder.

Salem’s light speed travel.
Tuesday John flew from Salem to New Orleans to see his mother, Shawn arrived in Salem from Maine, and Philip and Belle hopped on the Kiriakis jet and arrived in Vegas all in what appeared to be several minutes or at least a few short hours. What? We sure had to suspend disbelief during those scenes, but I can admit it wasn’t too challenging considering we watched Marlena being possessed by the devil, Stefano die a thousand deaths, Celeste with all her visions, and all the brainwashing. That’s the beauty of the show. It’s a little bizarre and always gives us a chuckle.

@SheKnowsDOOL I think today set a record with 3 insta-trips! John, Shawn, Phillip+Belle in the time it took Nicole to get to the hospital!

She’s a sweet little old lady. Delightfully charming. Just pass on her offer of tea! I’m not sure what to make of this storyline. John has waited decades to meet his mother. We’ve waited years to meet her and finally, when we do, she’s forced into drugging her son. Come on! I feel for John – even Maude, but was a little surprised by John’s reaction, telling Marlena that Maude, like everyone else, always has a choice. Did she? Did he always have a choice? Was she forced, the way John was forced into all the nasty things he has done in the past? Who knows. We weren’t privy to the whole story and it suddenly feels over. WTH!

Ball of confusion.
Hope confessed to a murder she didn’t commit in order to avoid confessing to a murder she did commit. Um okay? What’s terrible is that neither Justin nor Roman believed her so instead of working to find the truth, they swept it under the carpet. Oy. I bet Gabi wished SPD would have done that when she went to prison for killing Nick. Not that I believe Hope killed Malcolm, but she did murder Stefano! Shouldn’t she pay? Maybe not, considering he had it coming for decades – my poor dear Stefano!

A slice of life.
I loved the scenes of Hope and Ciara bonding at home, talking, reading, and discussing a party that Ciara wants to have. The highlight of this week with Hope was her bonding with Ciara. Not only was it relieving to see Ciara get some much needed attention but to know Hope’s over her obsession with revenge. Their five minutes of happiness is going to be all over because of Rafe’s stupidity – an ex-FBI agent driving by the scene of Stefan’s dumped body. Oy. You never go back to the scene of the crime! Now that Andre found his father’s body, he’ll be able to prove Hope murdered him. February sweeps is coming…Please tell me they’re not going to kill someone else off.

Yo Claire, your parents’ marriage is off limits.
I find it really irritating when kids interfere their parents’ marriages, especially when parents let them. Claire has had it rough with her parents breaking up but she needs to be encouraged to stay out of their business and focus on her future, because no matter what happens to their relationship, her stability and education comes first. It’s not every day you get an audition at Juilliard. At least Claire is talking more this week!

Oy…we’re back to playing musical relationships.
This is why I don’t have a favourite couple anymore. Because you can’t possibly root for one considering after their five minutes of happiness is up, there’s an interloper waiting in the wings. Somehow along the way, cheating and jumping from one relationship to another is all that’s written for most couples. We’re in the age of Tinder, so it’s not that surprising that in reality, this is the norm for many to jump from relationship to relationship, but I would rather see different types of relationships explored in soaps such as polyamorous couples rather than the standard cheating. But I digress. Nicole and Brady always had amazing chemistry but he has moved on and fans are getting used to Theresa with Brady and their son and her friendship with Nicole is blooming. It’s disappointing if it would explode especially so fast when they took time to bother building it up. Some thoughts from Twitter fans:

Photo shoot.
Gabi and Paul have zero chemistry, they were out of synch, and as good looking as Paul is, he didn’t seem to be modelling material. He looked too goofy hamming it up for the camera while Gabi was being fabulous and serious. I laughed throughout their entire shoot and had to jack up the volume on my TV in order to hear what the characters were saying because the music drowned them out. Hilarious. At least Paul is on a date, though what’s the story with him needing supervision from Gabi and JJ?

Deimos Kiriakis.
“Days” has rewritten Victor’s past to include another brother – Deimos, the demon! Vincent Irizarry is an incredibly talented actor and already his story is intriguing. What information does he have on nu-PhillyK anyway? And where did nu-PhillyK get that body? Most importantly, why doesn’t nu-PhillyK understand what the word “rebound” means?

Pill-popping mama.
Last week in Deconstructing “DOOL” I explored the possibility that Jennifer could become addicted to pain pills, because that’s the norm in soapland. And already it looks like they’re going down that road. Jenn doesn’t have an addictive personality though and we already have Maggie, Eric, Brady, John, Nicole and Theresa who relied too much on drugs or alcohol and Jenn Jenn’s almost perfect. Please don’t make HRH addicted to pills.

That’s all I’ve got. I’m looking forward to hearing from you in the comments below or on my Days Twitter account.

Deconstructing DOOL: Our show has...