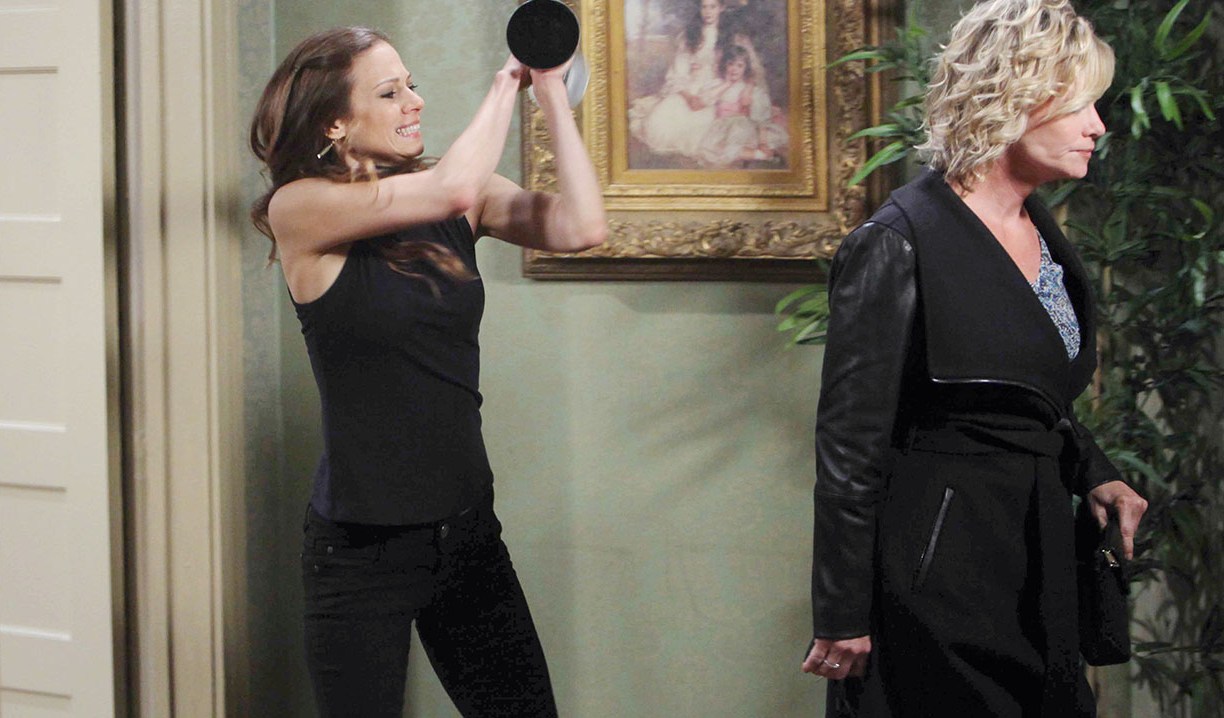 Not much happened in Salem this week with the exception of Ava playing “Clue” with Kayla. Salemites were still staggered from Daniel’s death and Eric’s accountability, Rafe and Hope were jumpy from her murdering the best villain daytime has ever seen and then playing ‘hide the body’ with him. It was up to Abigail and Chad to supply the much-needed romance.

RIP poor, dear, sweet Stefano. You will be missed.
Stefano’s gone. For good. Really. Stefano DiMera. Gone. It’s so bloody hard for most to believe. The Phoenix always rises! Hollie wrote this tribute to Stefano DiMera that I believe you’ll all enjoy, whether you loved him or loved to hate him.

Some are angry that Stefano met a final demise under a pile of trash in some warehouse set for demolition, which is stupid, instead of being sent to some island to while his days away in the tropics with some gorgeous young bird feeding him grapes. At least that scene was well done, with the exception of them leaving blood behind on that statue. I don’t know what to think other than I feel empty and so grateful to my friends who introduced me to “Days” back in the 90s or I might never have been amused, entertained and thankful to Joseph Mascolo for bringing us the biggest and best villain in soaps, Stefano DiMera.

@SheKnowsDOOL awesome camera angles with Hope and Rafe, I’ve never seen anything like this on dool!

Candace Young: “Can’t believe they killed him ‘one last time’. I don’t like it!”

Tammy Staples Ferguson is in agreement. “I’m sad he is gone. Just won’t be the same Salem without the Phoenix.”

Dustin Cushman: “I can’t imagine the show without him. No one else will be such a fun villain, and I hate the way they wrote him out. Hope and Rafe dumping his body in an old construction site? DUMB!”

Linda Thurmond DeCristofaro: “I hate to see one of the best villains ever leave. No one can replace him, especially not Andre. I hope that’s not the plan. He did deserve a better send off.”

Gordon Parkhurst suggested, “There’s probably a reason for the construction site? We’ll have to see.”

@SheKnowsDOOL Same. + I understand JM is older + not in the greatest health so I’m glad they could give him a definitive ending.

@SheKnowsDOOL @galengering Rafe and Hope threw Stefano in the trash. ?

Aftermath of the accident:
Jennifer is obviously in a lot more pain than she’s letting on. That could lead to an interesting storyline for her, though I hope it’s not about an addiction to pain pills because we’ve been there. As for Eric, I condemned him while watching him drinking and driving. It was the most selfish thing he could have done but hearing him take responsibility and seeing his pain made me remember who he is at his core and I admit that I feel sympathy and pity for him as well. A few others did…

For my column! Your thoughts on Eric drunk driving?

Salem High teens:
How come Claire barely speaks? Honestly I don’t understand the point of her if she barely says two words. Worse, when she does, all we hear is about how she’s worried about her mom and trying to get her parents back together. “Days” is depressing enough right now without ramping up the teen angst. Between her not speaking and Ciara talking way too much, Theo’s the most interesting teen.

Eve.
It was nice to see Eve back on canvas, ‘adulting’ and not drinking wine from wine glasses the size of her head and hating on Jennifer. But her writing is now boring. Who cares about her running that music program or whatever the bore it is, or her new protégé Claire, the mute kid. I’d rather see more of her interacting with everyone in Salem. Not weirdo Eddie, either. And now the writing is on the wall that she and Justin’s newfound relationship is doomed. Not that we ever thought they had a chance as a rebound relationship.

Saint Daniel’s death.
Last week I said goodbye to Salem’s finest doctor, Daniel Jonas. Is it bad that I’m already finding his death is getting old? I don’t want to diminish the fact that Salem has suffered yet another great loss but viewers have a short attention span. They don’t want to sob for an hour a day for weeks on end. It’s been months since we’ve had to sit through so much death. Let’s get on with the funeral and move on. And yes I’m going there…Daniel has been in Salem since 2008 and Bo since 1983 and already Daniel’s death has gotten way more airtime than Bo. What kind of a message does that send to the vets? And if Ari Zucker doesn’t get a freaking Daytime Emmy next year I’ll scream.

I don’t even want to talk about how Brady got Daniel’s heart and now seems to be having weird and possibly sexy dreams about her. Haha!

Ava and the kid.
I haven’t said much about Ava and the photo of the kid because it’s just sort of exhausting and after Friday’s episode when she hit Kayla over the head with the candlestick in the library, we’ve another kidnapping. Gah! At least Ava isn’t in love with Joey, but obviously, she’s still obsessed with Steve. Is there really a kid out there or did she get that photo off of the internet?

Chad and Abby:
There’s not much to say except that it’s nice somebody is having a little romance!

Chad asks Andre, “Brainwashing, hypnosis, auto-suggestion. Any of that ring a bell?”

Eric to Father Louis, “I feel transformed into a selfish, weak-willed excuse for a man with no conscience.”

Deconstructing DOOL: There were...