Deconstructing DOOL: Death and destruction and don’t forget the chaos 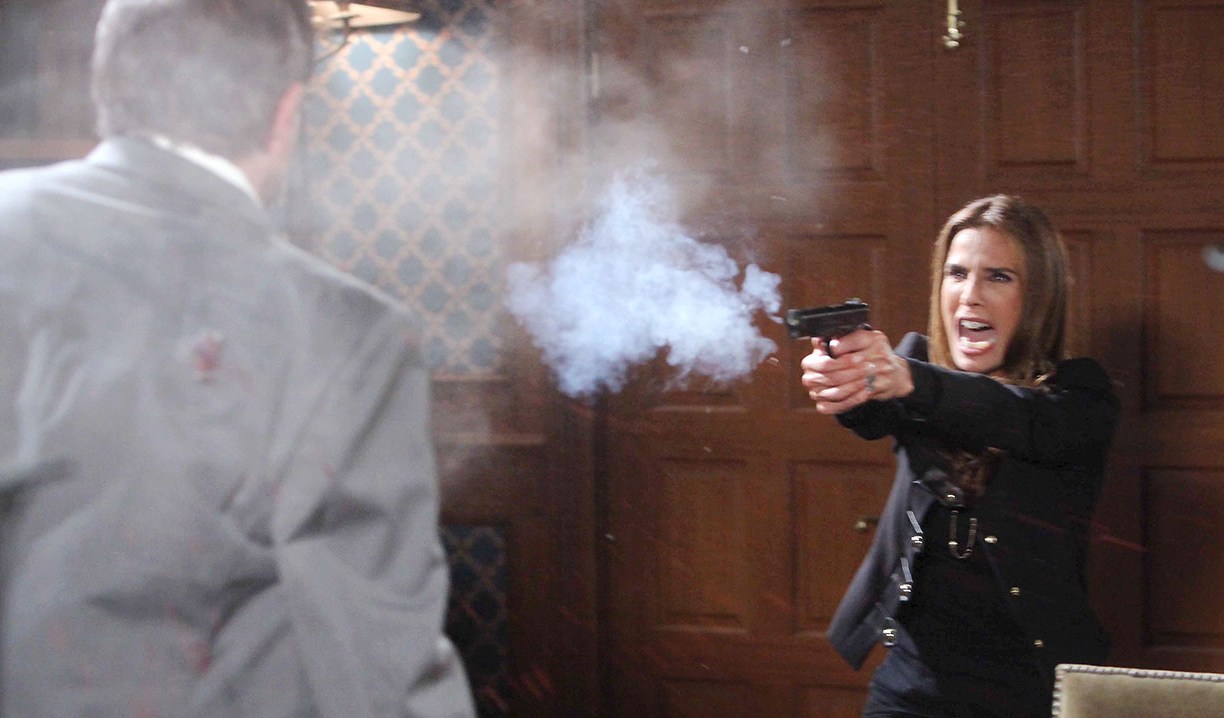 “Days” has certainly lost their fair share of actors in 2015. We’re a week into 2016 and seeing much of the same. It was two years ago that  we heard the good news that Days of our Lives is renewed for another two years but what happens after September 2016? The ratings have improved, greatly, but so many murders in Salem have had some fans wondering what’s going on and whether or not we’ll get another two years.

Fashion police.
The fashion show and party at the old Penthouse Grill wasn’t our usual “Days” storyline. Fashion shows are believable on “Bold and the Beautiful” because they’re in Los Angeles but since “DOOL” is set in Salem, it’s not as believable that Kate would be chatting up Donatella Versace. Theresa’s hyperventilating while preparing was understandable but I admit I found it annoying. Anne was a lot of fun as always but the models ripping each other’s garments off was almost horrifying and ridiculous. The music was way too loud. I had issues hearing the dialogue and I’ve perfect hearing. The lighting? Very 80s. I’m sorry for nitpicking but I can’t be the only one…

@SheKnowsDOOL They’ve been very fond of blue lighting in all the bar scenes lately and I find it does nothing to flatter the performers. — Evaine (@MetEvaine) January 4, 2016

@SheKnowsDOOL Yes! It was so loud you could barely hear the dialogue. And the music sucked!

The accident. Goodbye to Salem’s finest doctor, Daniel Jonas. What a great loss to see yet another core character die. I thought the impact of his death would fall a little flat for me since he has been so rarely seen lately and before that I was sick of the Days of Daniel’s Lives but I liked Daniel. I was heartbroken for Nicole and Maggie. Daniel was involved in numerous stories over the years that touched people’s hearts. He has saved many Salemites. Some fans are hoping that Nicole’s pregnant with his child. The scene of her ranting about having everything and everyone she loves taken from her was heart wrenching. At least a part of Daniel will go on in Parker and Brady – who was a good choice for the transplant. The set up with Kayla and Fynn, even Marlena discussing Eric’s heart infection and the clinical trials that likely will amount to nothing made it obvious Eric wouldn’t be getting Daniel’s heart. Some fans were relieved, thinking he shouldn’t have been a contender since he was drunk driving at the time of the accident. I’m not sure if Maggie even knew he was drunk. Once the crisis winds down I’m sure Nicole will demand answers! How painful was it for Brady to hear his best friend died and that he got his heart?  Highlight of the week: John wanting to donate his heart to save his son’s life, and in turn saving his step-son, Eric. My heart melted. It was so giving yet …stupid. He didn’t think it through but what parent wouldn’t want to sacrifice themselves to save their child? While we’re not 100% on who caused the accident, all signs do point to Eric so far. I don’t know how he’ll live with himself, but mostly I don’t think he’ll live at all.

I’ll just say what we’re all thinking. The biggest issue with this whole storyline is that there’ll be no more shirtless Brady. That’s just a travesty.

Stefano vs Hope. Shocking in more ways than one, even with the rumours. On one hand, I thought Hope needed to listen to Rafe and let the police do their job. On the other hand, this is SPD we’re talking about. Though I can’t deny her revenge is understandable, revenge on this show has been done to death and I never thought a loving and giving person like Hope could sell revenge. Friday came and Hope was on fire. Her dialogue, her demeanour…If Stefano wasn’t taunting her so much, she may not have pulled the trigger and shot him. What an amazing scene with Mascolo and Alfonso. I love this Friday cliffhanger but to me, Stefano is a massive part of the show. Was? Corday did say anyone killed after September 2015  was gone for good. I can’t imagine there being no more Stefano DiMera. He’s always been so untouchable and one of my all-time favourite characters. He’s The Phoenix. But he may not rise again. I need a week of silence… Just a thought…I have been wondering if Ciara could have killed Malcolm. If not her then Andre likely did it. Or maybe neither?

@SheKnowsDOOL It’s a wild guess but isn’t Vincent Irizarry coming in a few weeks. I think this is all drag out til he gets in the mix — Che (@CheReal85) January 8, 2016

@SheKnowsDOOL Yes! Let’s eliminate Bo, make Hope crazy, kidnap Ciara to get to the rest of the Kiriakis’! The Dimeras…

Chad and Abigail and Belle:
Chad asked Belle not to tell anyone her secret so ten minutes later, she told PhillyK. Oy! As for Chabigail, I’ve always liked them but they’ve been together two minutes and I’m already annoyed by them. Not only are we seeing them far too much but less is more when it comes to flashbacks and repetitive dialogue. I liked Ejami and Danicole at one point too, until the same thing happened with them. I’d love to see a balance. I’d rather see Tad and Rory, Maxine and Lucas. And please, please have Chad and Abigail get a clue. You better believe Andre will see through Chad’s ruse.

Liar!
I love Tamara Braun’s acting. She’s fabulous but I find it hard to believe Kayla and Steve would believe a word coming out of Ava’s lying mouth. Last week Dustin said Joey having feelings for Ava is just as bad as the whole JJ and Eve storyline. Yep. Why go through this again when most fans loathed Jeve?

I hope you all enjoyed Dustin’s blogs while I was away. I did! I wish you all the happiest of what 2016 has to offer. Feel free to vote in Hollie’s Soaps Year in Review for 2015’s best grab-the-tissue moment, grab-the-popcorn moment and more. Share your thoughts on the blog and the show in the comments below and find me on my Days Twitter page.

Victor to Maggie, “How a cantankerous old man like me got a lady like you, I’ll never know.”

Deconstructing DOOL: Did anyone...