Deconstructing DOOL: Did anyone realize it was New Year’s in Salem? 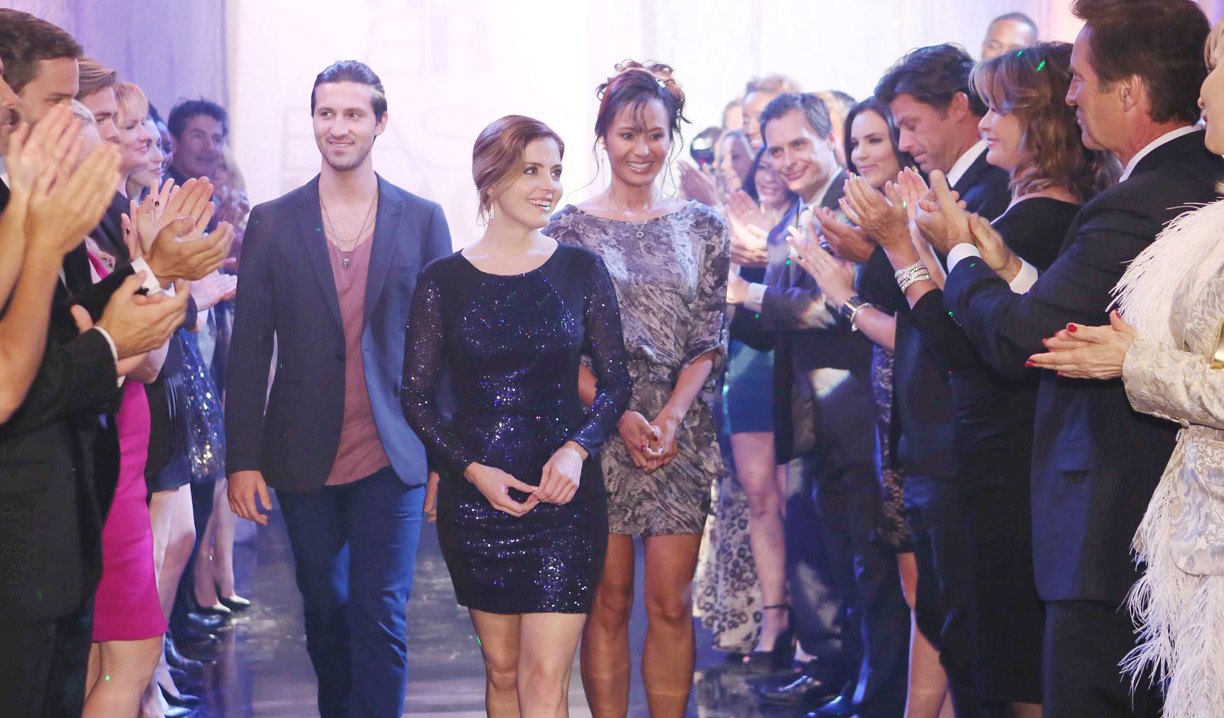 Theresa had a reason to celebrate this week, though the rest of Salem acted like they forgot it was New Year’s. The Basic Black party seemed to be the focus of this year’s holiday celebration.

Ye old Horton balls.
I thought the ornament hanging this year was really good. In past years it has often been quick and rushed, but this year they took their time with it. The one thing that could have made it fantastic would have been some flashbacks to past years’ hangings. I think viewers would have loved that given this is the fiftieth anniversary. More flashbacks to past Christmases in general would have been great too. The scene where Hope gave Chase his ornament was however the most touching part of the whole ceremony.

Marry me Sweetness.
Steve’s proposal, using a ring made from a bullet that almost killed him, was a tad morbid. It also wasn’t one of this couple’s most romantic moments period, but the flashbacks of them were great. I’ve always been a big Steve and Kayla fan, so I hope they can make it. As I noted in last week’s Deconstructing DOOL, this whole story with Ava is still falling flat. She’s gotten both Steve and Kayla to forgive her, so what next? She can’t keep up this charade of dying forever. Meanwhile Joey having feelings for Ava is just as bad as the whole JJ and Eve storyline we finally got over, so why are they determined to do something like that again?

Of course it’s the DiMeras!
Hope and Rafe have separately come to the conclusion that the DiMeras were behind Bo’s kidnapping and imprisonment, and Hope is out for vengeance. Frankly this entire storyline has just stunk and is pointless, as the DiMeras are the main villains on the show and they never pay. They didn’t pay for what they did to John, Roman and Marlena, and they sure won’t pay for what they did to Bo. As a long time Bo and Hope fan, I wish the writers would have written this some other way if they knew ahead of the game that they couldn’t keep Peter Reckell (Bo). There was no need to turn Aiden into a villain so that Bo could be Hope’s hero, only to kill him off. To add insult to injury is this current storyline, which we know will not give Hope any vengeance or closure.

Ben, you are not the father!
Given how long they dragged out Ben holding Abby hostage, I was delighted to see them not drag out Thomas’ parentage any longer. Perhaps knowing that Thomas is his child will help Chad break the spell that Andre has put on him. I’m glad to see that Abby and Marlena have realized something has been done to Chad as well and they aren’t going to drop it, though I’m still shocked that Stefano doesn’t seem to be more concerned with what Andre’s doing to Chad.

Not feeling NuPhilip.
I’m still not feeling NuPhilip. There is nothing wrong with the actor playing him, as it’s Phil’s personality. Philip was never such a workaholic, and he’d never miss a chance at a date with Belle. What is up with him? Also what was with Caroline’s spooky vision of him standing over Victor’s body? That’s more of the Philip I know, the scheming and conniving one who would do anything to get what he wants.

The big fashion show.
The highlight of the week has been the big Basic Black re-launch and fashion show. Watching Nicole stick it to Kate was great, and I even liked seeing Theresa get her big moment and learn that dedication and hard work pay off. We asked viewers if they had been warming up to Theresa and Brady, and it seems many have come around to the idea of them as a couple.

We wanna know, do the holidays have you warming up to Theresa and Brady?#Days

@SheKnowsDOOL he gets her. Even stepping up to Victor and Nicole thinks with the heart head

I am actually enjoying them, and hope Theresa really has turned over a new leaf. Her and Nicole make a great team, who would have thought? The cat fight between the models before the show was great, and it was good to see Paul back and doing something. He’s an amazing actor and they need to find him a story.

As always, these are my opinions on the latest episodes. Please leave your own in the comments, and be sure to have a happy New Year.