Deconstructing DOOL: Fifty years on the air and Days is boasting its biggest audience in 20 months 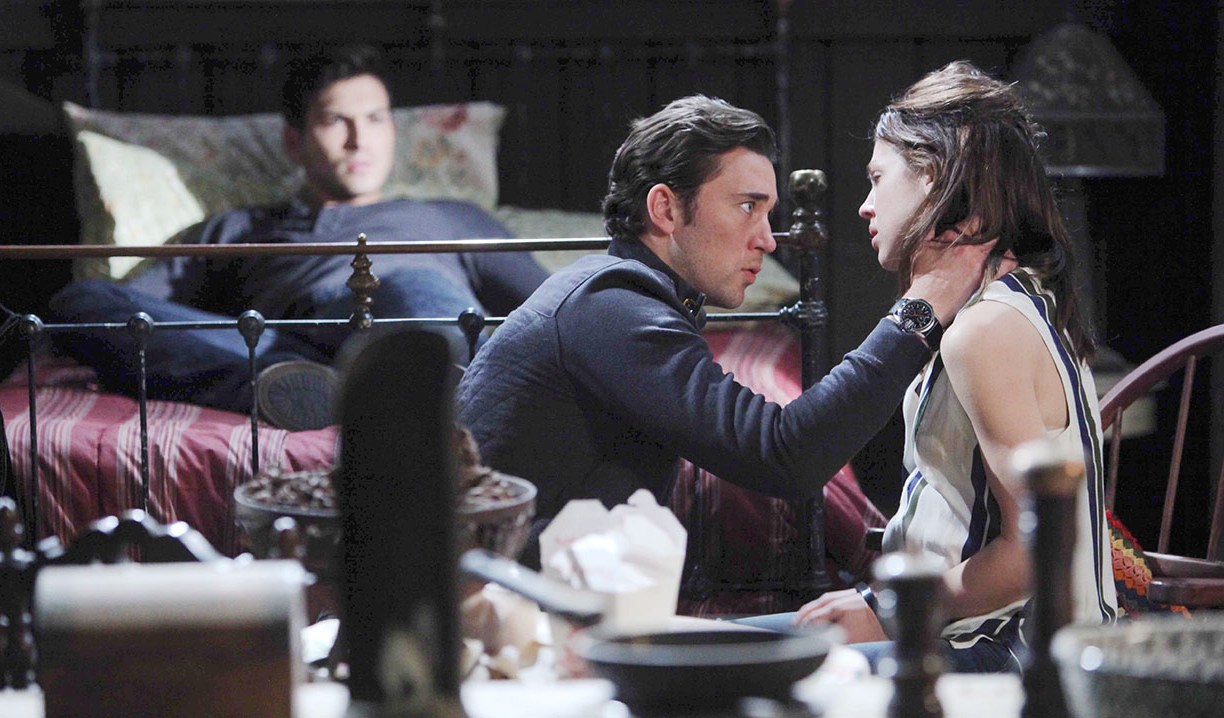 Another glorious week of viewing. The acting is superb, the storylines are fabulous yet I do have one or two small bones to pick.

Chad saves Abigail…in her dreams.
How creepy was it to watch Abigail have to make-out with the Necktie Killer while she wanted to bash his head in with the poker? He told her he’d uncuff her so they could make love. Many fans around the world made the collective sound of “Ewwww.” He’s not just a murderer but the boy is clearly delusional if he thinks she’d want to make love to him after he revealed who he is. One fan thinks he’s truly sadistic but for another reason!

@MrRobertScott @KateMansi Ben u r one sadistic son of a bitch. Leaving a pregnant woman in front of Chinese food with hands cable tied! Boo!

Future bros?
Chad, meanwhile, spent part his week searching for Abigail. She dreamed he found her but don’t expect that to happen in the next week or so…At least Rafe, once again, believed in Chad. It’s interesting and I hope this… I don’t know…civility or respect of sorts doesn’t end when Abigail is found. It’s pretty sweet when guys have chemistry on the show.

Is EJ alive?
I truly have no idea what to say about Sami thinking EJ’s still alive. Do the writers feel they’re correcting a wrong made by past writers or is Andre stringing Sami along? Was he really the one to write the letter to Sami and did he circle John 16:22 which incidentally reads, “Therefore you too have grief now; but I will see you again, and your heart will rejoice, and no one will take your joy away from you.” We’ll see how this progresses and maybe by then I’ll form an opinion. I’d of course love to hear yours.

Bo’s return.
Having been a Bo and Bope fan for years, I was happy about his return, though not thrilled that it’s only for a two-month stint. Teaser – he’ll be gone before the end of November. He was gone so long that he forgot he has three kids – Chelsea hasn’t been mentioned once since his return. My biggest issue with this storyline is that Bo returned a hero and “nice guy” Aiden’s character was trashed – and sacrificed, basically by being killed off. Now Bo’s dying and Hope will be once again left alone to pick up the pieces. Hasn’t she suffered enough? It upsets me so much I almost wish they didn’t bring him back. I mean – for this?! Sure the storyline is brilliant but don’t take Bo away!

Why so much death on “Days” lately? Should we be concerned?

SORASd kids.
Last week in Deconstructing DOOL I admitted I’ve been feeling the challenge feeling the nu-kids of Salem, possibly because we haven’t seen much of them. Obviously we all want to like them and so far I’m still open to them but was curious about how others felt so I took my curiosity to Twitter with a poll. Feel free to weigh in by leaving a comment if you missed the poll deadline.

We haven’t seen much of them yet but so far – thoughts on the SORASd kids of Salem? If on the fence let me know!

@SheKnowsDOOL @soapoperafan Ciara is taking some getting used to. I like Chase & Joey & I think autistic teenage!Theo will be interesting.

Thrady.
Brady and Theresa’s story is moving a little too fast for me this week. The love-making was random and I think I’d have been better off seeing them cuddle after, which would have gone a long way to show what Brady really feels for her. Though, his conversation with Nicole made it clear that he’s not even sure of his feelings yet, he definitely is into Theresa and not just for sex. I hope this is played out slowly because the last time I polled “Days” fans about this couple most were against them.

Since the focus this week was on Hope’s ordeal and Bo’s return, that’s all I’ve got to say. I look forward to your thoughts. Meet me on my new Days of our Lives Twitter page if you want to dish all things Salem!

Brady wonders, “Where have I been?” Victor snipes, “Probably sleeping with the in-house tramp!”