Thanks to Wendy, Gabi Takes Drastic Action With Stefan, Who Enacts His Own Nefarious Plans For EJ

Wednesday, January 25, 2023: Today on Days of Our Lives, Wendy sparks inspiration in Gabi, Stefan puts his plan for EJ into motion, Chanel makes an admission to Allie, and Sloan interrupts Nicole and Eric. 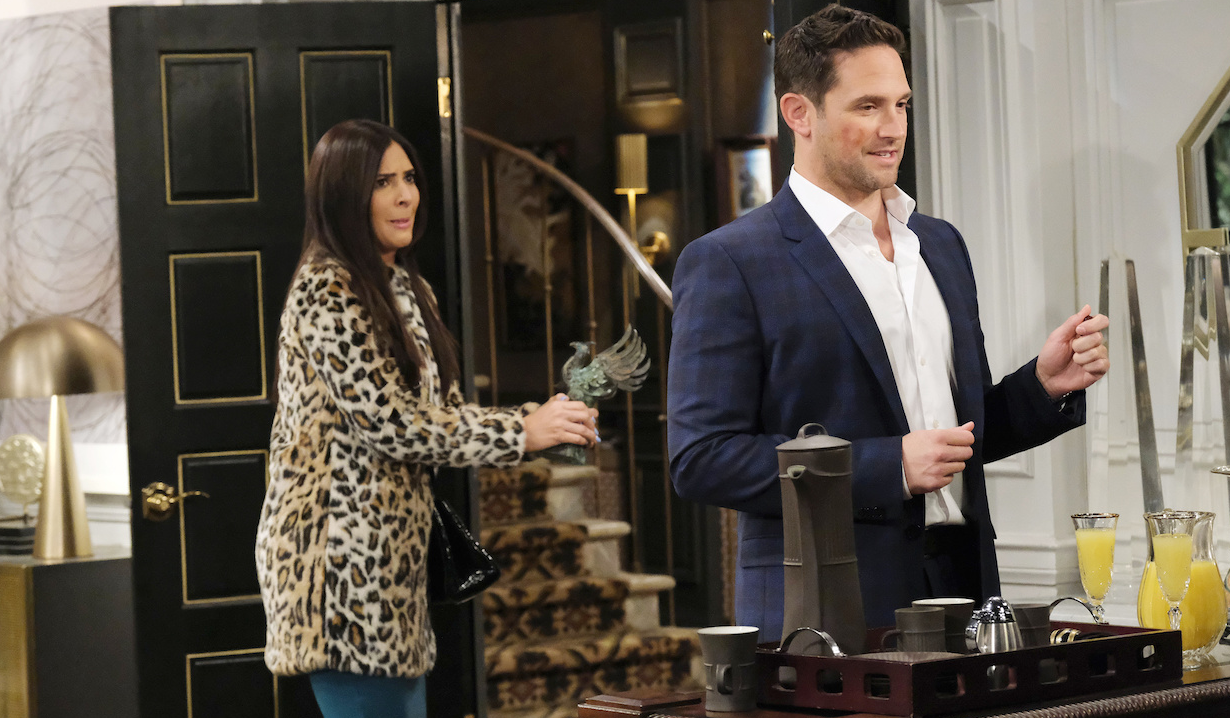 Wearing robes in the morning, Allie and Chanel sit in awkward silence over cereal. They eventually break the tension to fight about Johnny. Chanel reluctantly admits she was about to kiss him at the hospital. She explains that Johnny was a wreck and emotions were running high, but it doesn’t mean anything because Chanel’s in love with Allie. She asks her to forget about this. First, Allie needs to know if she’s still attracted to her brother. Chanel retorts, “What about you and Alex?” They argue until Allie stands to get ready to see her family. 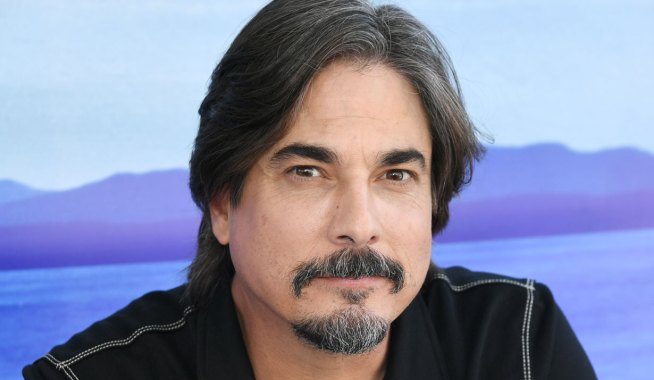 Days of Our Lives’ Bryan Dattilo Introduces the ‘Cutest Grandson in the World’ — and OMG! That Hair! In bed, Eric wakes up to Sloan reading Marlena’s obituary. She thinks The Spectator needs better fact-checkers, considering the things they’re saying about her life. Eric is sure it’s all true and closes her tablet. They passionately kiss.

Later, Eric gets dressed as Sloan lies naked in bed. He leaves to help the family with Marlena’s arrangements. She tells him not to be a stranger.

At home, Tripp learns over the phone that he can’t visit his mother anymore. Johnny comes to the door to apologize for the things he said to Tripp in Square. He was upset about Marlena and was way out of line. Tripp doesn’t blame him for being angry at Ava. Besides, he took the first swing. They shake hands and Johnny leaves. 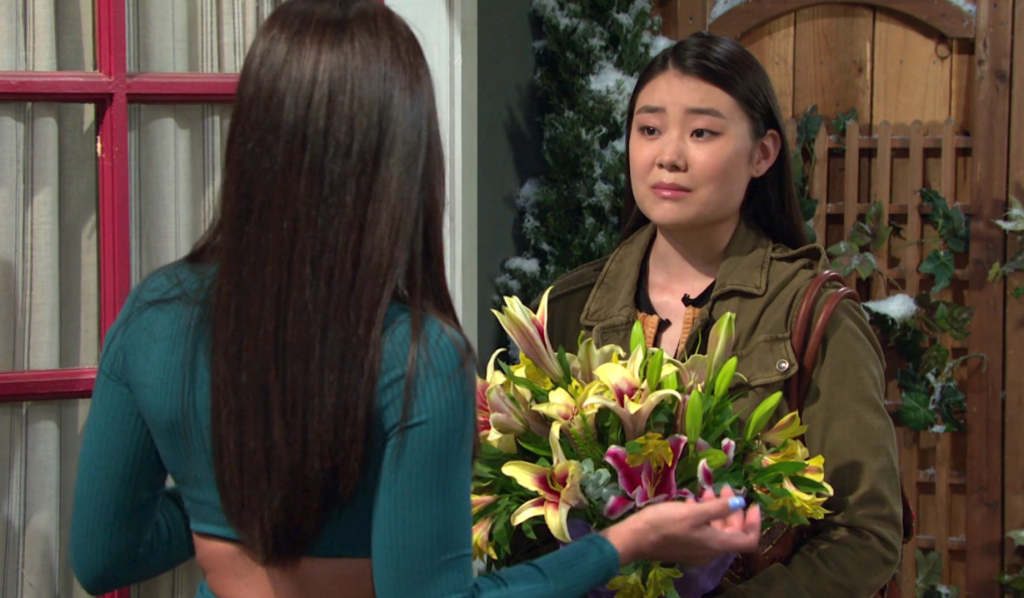 On the phone in her kitchen, Gabi offers her condolences to Will. Wendy comes to the door with a bouquet of pink lilies. After Gabi rants at her, Wendy explains that Li begged her to stay quiet about the brainwashing. She just wanted Li to be happy. He’s her brother and she loves him. She knows it’s no excuse, and she knows what she did was wrong. Gabi accepts her apology.

Wendy comes inside and asks if Stefan’s being deprogrammed. Gabi recounts how she tried to go to Marlena on her deathbed, which repulsed Stefan. He never wants to see her again. Wendy muses that it’s too bad she can’t make him get deprogrammed. She suggests Gabi get a court order or hold an intervention. Gabi points out that even if she could get Stefan to consent to it, there’s no one around to fix the damage. She’s out of moves. Wendy never expected Gabi Hernandez to give up.

After Wendy leaves, Gabi mulls over Wendy’s words. She determines Wendy’s right. She has to do something — and she will.

Wendy comes to see Tripp, who relays that Johnny apologized to him. He then shares that he’s not allowed to see Ava because he’s triggering for her. Also, he didn’t feel it was his place to go with the family to make Kayla’s arrangements. He feels lost. Wendy says there’s no roadmap to grief. For now, he should just stay calm and put one foot in front of the other. Eventually, he’ll end up right where he belongs. They share a tender look.

Johnny heads to Allie and Chanel’s apartment to see Wendy. Chanel answers the door and tells him she’s not there. 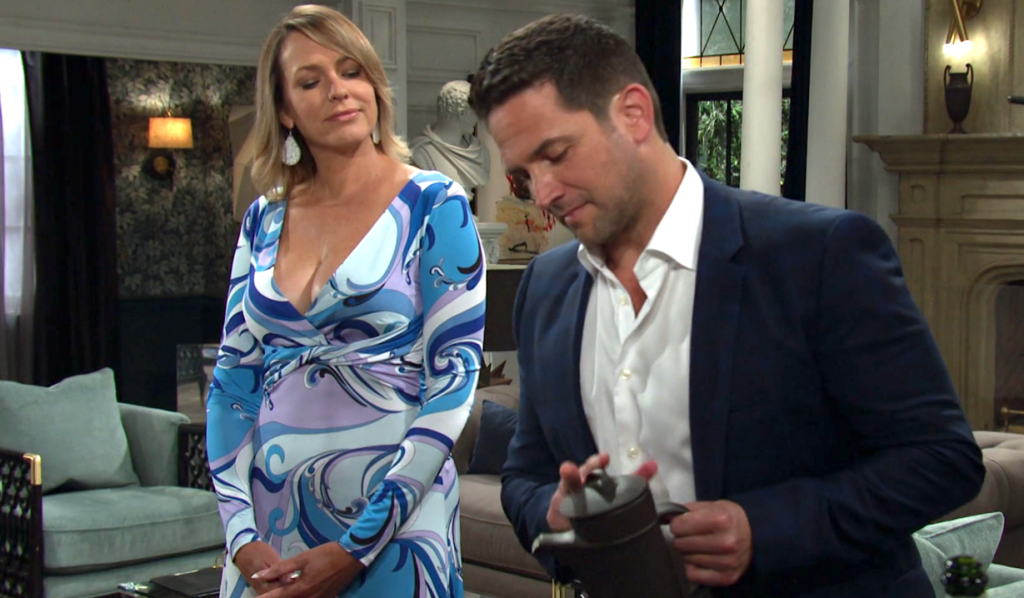 At the DiMera mansion, Stefan defends his plan to go after EJ to his father’s portrait. A wary Nicole enters. She heard him talking about making a DiMera pay. “Which one were you referring to,” she asks. He says, “Kristen, of course.” Nicole scoffs. She’s already been arrested and will pay for killing Kate and Kayla. Stefan adds, and Marlena, which is news to Nicole. He shows her an online obituary.

As Nicole reels over Marlena’s death, he asks if she’s thinking about Eric. Of course, she is. She’s thinking of all Marlena’s children. Stefan gets antsy, waiting for EJ to return from firing Li. When he tells her EJ confessed to knowing about the brainwashing, Nicole tries to act like she had no idea. Stefan knows better and suggests she work on her acting skills. She leaves for work. 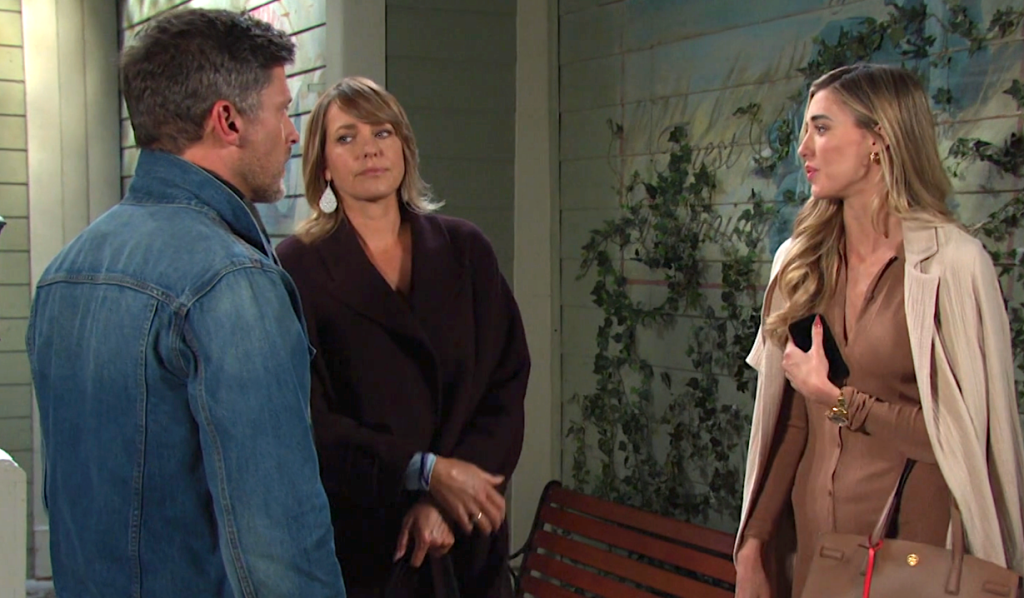 Nicole runs into Eric outside the pub and tells him how sorry she is about Marlena. He thanks her. She asks if she can give him a hug. He says of course, and she embraces him. Sloan walks up to give Eric the phone he left in her bed. Nicole side-eyes him.

In his hotel room, Li answers his burner phone to Rolf, who needs more Petri dishes. He agrees to get them as long as Rolf keeps quiet about the brainwashing. EJ drops by to fire him. Li threatens to expose him regarding Stefan, but a smirking EJ reveals his brother already knows. Since Li no longer has anything to hold over him, he’s out and Stefan’s in. Li declares Wei won’t stand for his dismissal. EJ doesn’t think Wei can do anything, considering Li had Stefan brainwashed and tried to murder him. Li angrily responds that unless his guilt can be proven to the board, Wei will make a solid case for him to stay. EJ knows Wei’s words won’t hold the same weight as an actual DiMera. Therefore, EJ wishes him luck in all his future endeavors. He snarls that you don’t cross a DiMera and get away with it.

EJ waltzes into the mansion and reports to Stefan that Li’s been fired. When EJ heads off to file paperwork, Stefan prepares them celebratory mimosas. He pulls out a vial and dumps liquid into one of the flutes. He says after a few doses, EJ’s judgment will be so impaired, the DiMera board will have no choice but to remove him. Gabi sneaks in through the French doors behind him. She picks up a Phoenix statue and swings it at his head. He drops to the floor. 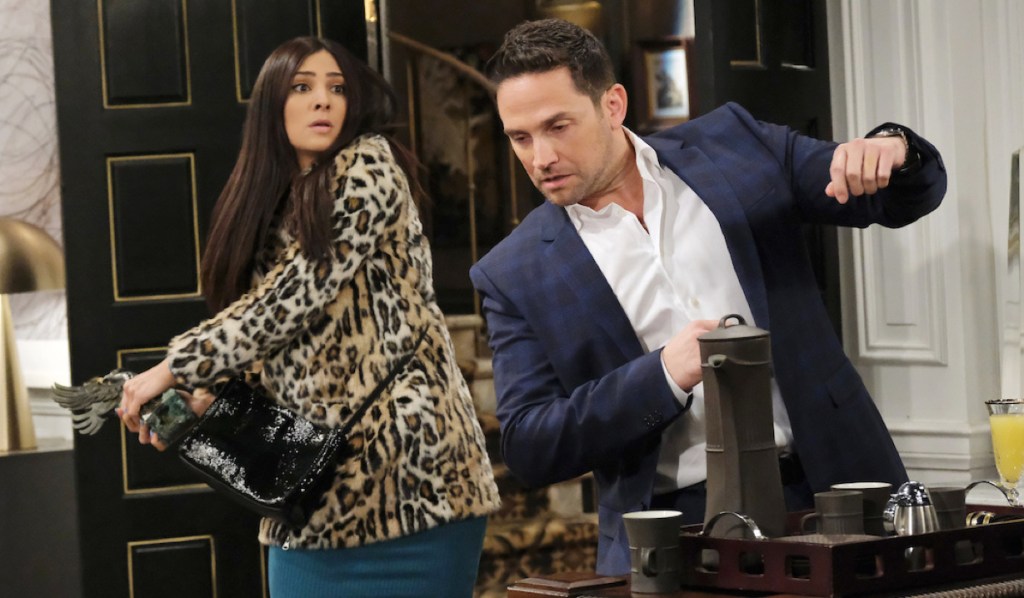 Next on Days of Our Lives: Chanel and Johnny get honest, and Gabi hides a body.

Check out the real-life partners of the cast from the Law & Order franchise in the photo gallery below. All Is Not What It Seems When Susan Greets Marlena In Heaven — Plus, Where Are Kate and Kayla?

Gabi Calls [Spoiler] Upon Kidnapping Stefan — Plus, an Uninhibited Nicole Acts Out 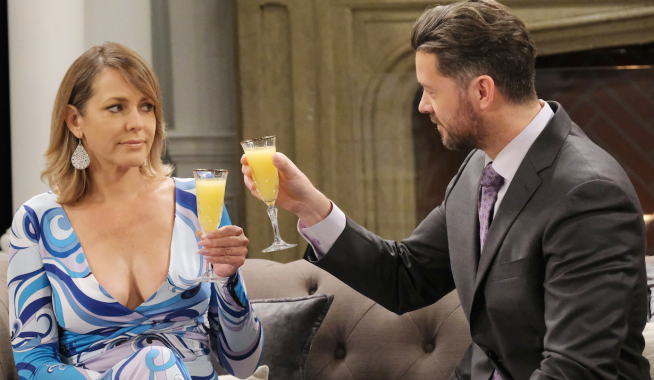