Wednesday, January 4, 2023: Today on Days of Our Lives, Sarah's decision squashes Xander's plan to stay out of prison, Rafe and Jada question Gwen, Stephanie rails at Alex, and Rafe gets divorce papers. 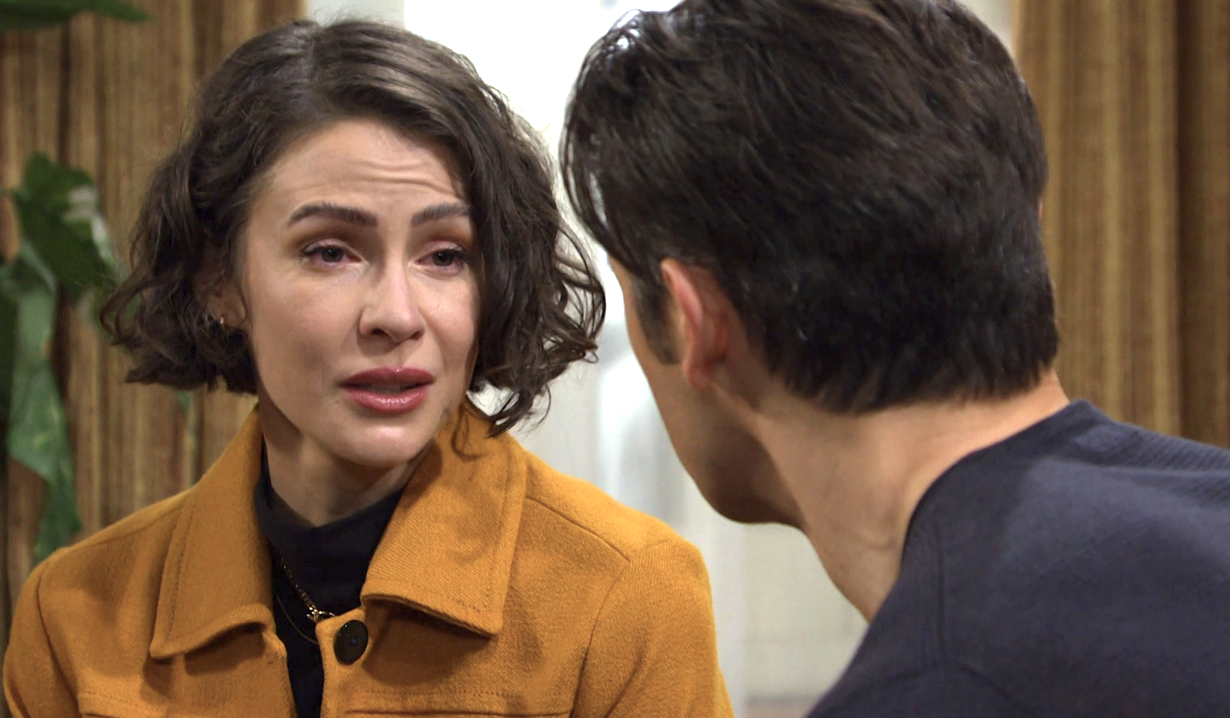 At the station, Jada hands Rafe an envelope that was delivered for him. Rafe opens it to Nicole’s signed divorce papers. As soon as he signs them, his marriage is over. He hesitates, feeling like he failed for the third time. Jada offers that it’s better to have loved and lost, which makes Rafe wince. Jada apologizes for being cringey and advises Rafe to sign the papers when he’s absolutely ready. He quickly signs before she can finish her thought. 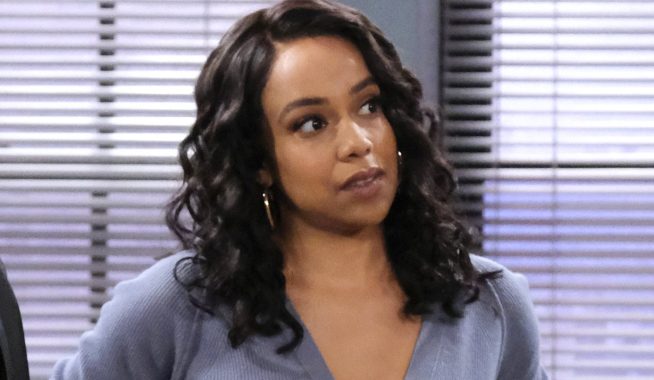 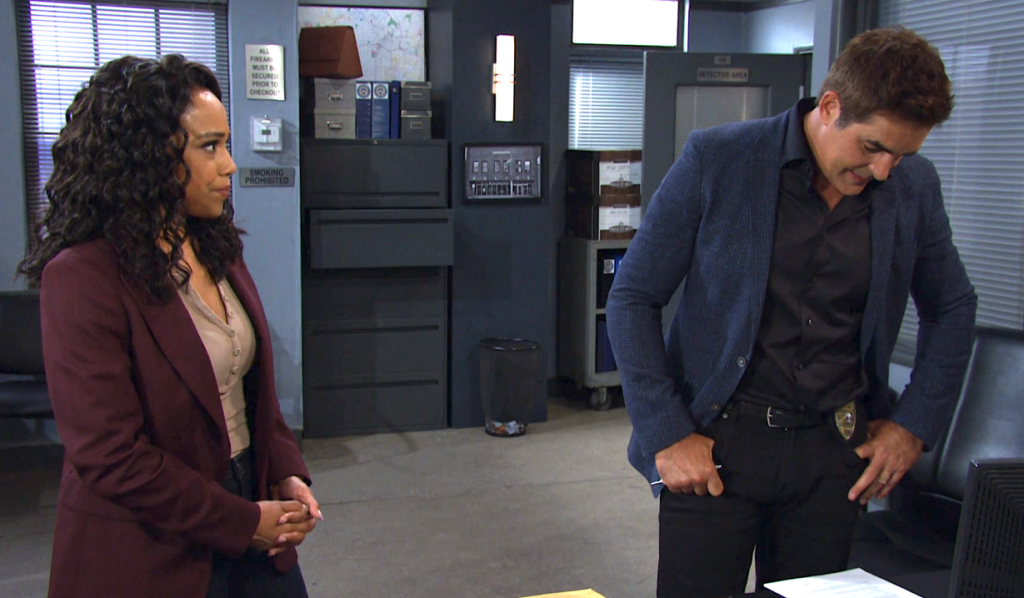 At the Kiriakis mansion, Maggie wonders if Sarah is overreacting about divorcing Xander. Sarah counters that she’s underreacting, considering Xander kidnapped two women, one of whom is dead. Maggie doesn’t think he meant to hurt either one of them. Plus, he let them go, eventually. An unimpressed Sarah admits that she will always love Xander, but wonders how she can stay with him if she doesn’t trust him. Maggie says she should divorce him then. But, she should give the decision time because she could change her mind. Whatever she decides, Maggie will support her. 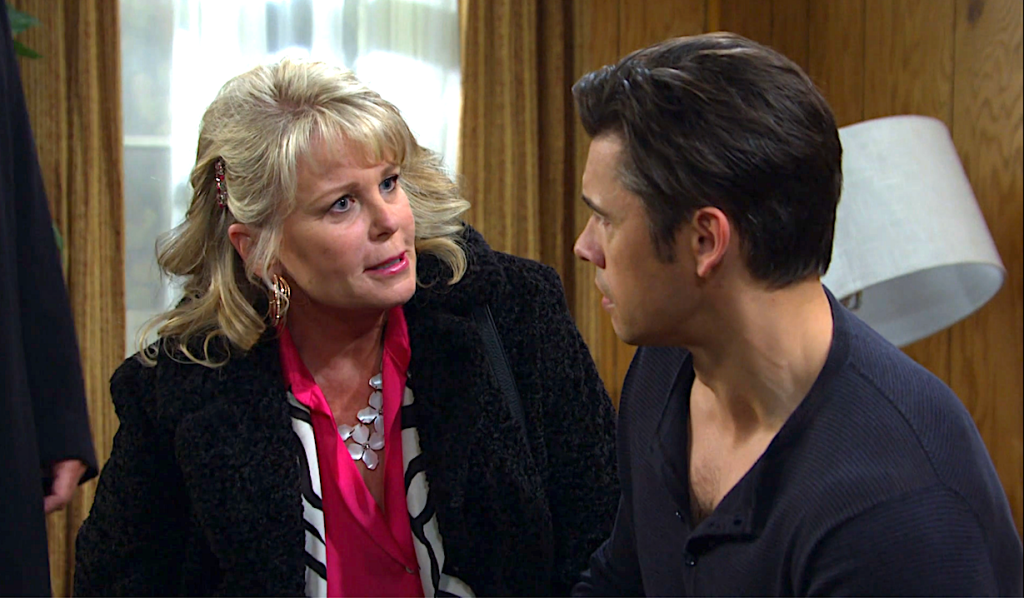 Justin pulls Bonnie away after she sucker-punches Xander in his motel room. They tell a confused Xander they know he kidnapped Bonnie, and he’ll pay for it. Xander vows he never wanted Bonnie to be a part of it and feels terrible guilt and shame. Bonnie demands to know if Gwen was his accomplice. Xander insists she wasn’t involved. Justin suggests he get himself a good attorney before they storm out.

More: Why Days is tearing apart its fan-favorite duos

Back at the station, Rafe declares he’s getting back to what he does best — putting away the bad guys. Bonnie marches in with Justin and says, “Good news. We got one of those for you.” After they tell Rafe and Jada everything, Bonnie wonders if they’re going to arrest Xander now. The cops tell a rattled Bonnie they need evidence or someone to confess.

Sarah returns to the motel, but makes it clear to Xander that she’s not staying. He understands why she gave him up to Bonnie and Justin, and wonders if she’ll corroborate their story with the police. Sarah won’t lie for him. Xander says she might not have to since a wife can’t be compelled to testify against her husband. Sarah responds, “That’s presuming I still am your wife.” She doesn’t trust him anymore, and she never will. She’s filing for divorce. 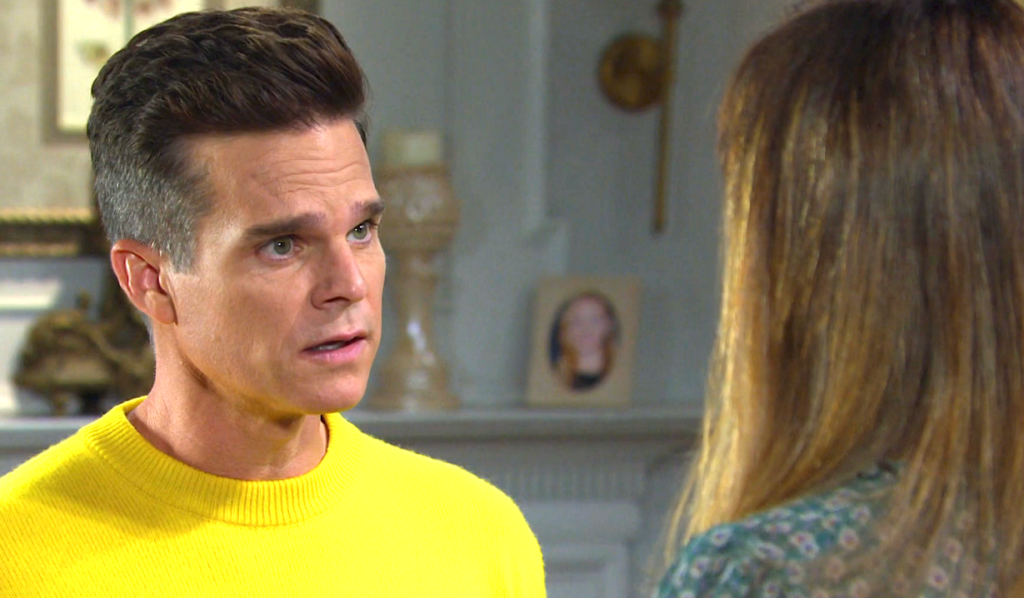 More: How ‘Xarah’ could rise again

Leo fills in a panicked Gwen at the Horton House about Sarah giving Xander up as the kidnapper. Gwen picks up the phone to warn him, but Leo yanks it away. Xander’s sinking, and she needs to abandon ship. Next, he tells her that Bonnie and Sarah think Gwen was the second clown.  He worries the cops will be led to him. Now that he has finally has his life together and Sonny trusts him, the last thing Leo needs is trouble with the law.

Rafe and Jada come to the house. They know Gwen helped Xander, so any details she can provide them would be greatly appreciated. Gwen lies that she knows nothing. After they’ve gone, Leo shocks himself by encouraging her to help the cops. She shouldn’t have to pay for something Xander did.

At home, Justin hopes Bonnie’s nightmares are over now that they know who kidnapped her. Bonnie thanks him. He makes her feel so safe. She feels bad for him, though, because Xander is his family. Justin knows the most important thing is to ensure Xander and those who helped him get what they deserve. Later, they talk with Maggie, who cares about Xander, but thinks he should face the music for what he did.

In the park, Stephanie rails at Alex for telling Chad to back off. She’s not his property. He doesn’t think she is. However, he doesn’t think Chad is being honest about his feelings for her. Alex apologizes for overstepping, but he worries about her having such a big heart. 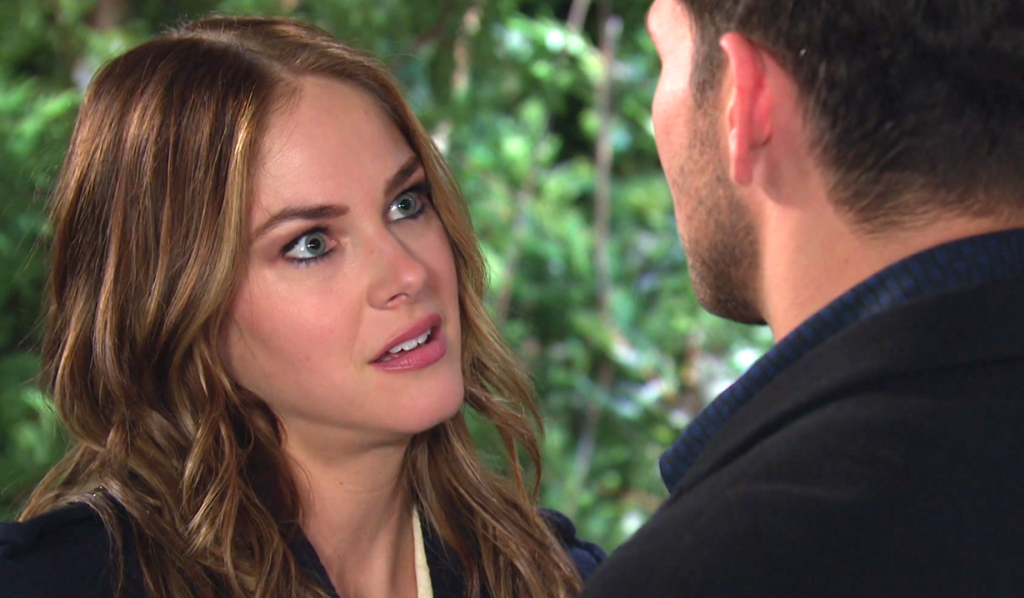 Stephanie points out that he’s the one who insisted Chad stay for Christmas. Alex says he didn’t want to look like a jerk by throwing a sad widower out in the cold. Stephanie retorts that he’s making up for that now. She continues that she owes it to her cousin, Abigail, to help Chad. Alex muses that she’s leading Chad on. Stephanie reiterates that there’s nothing going on between them. Chad respects her, which is more than she can say for Alex. She storms away.

More: Why now is the time for Philip to return 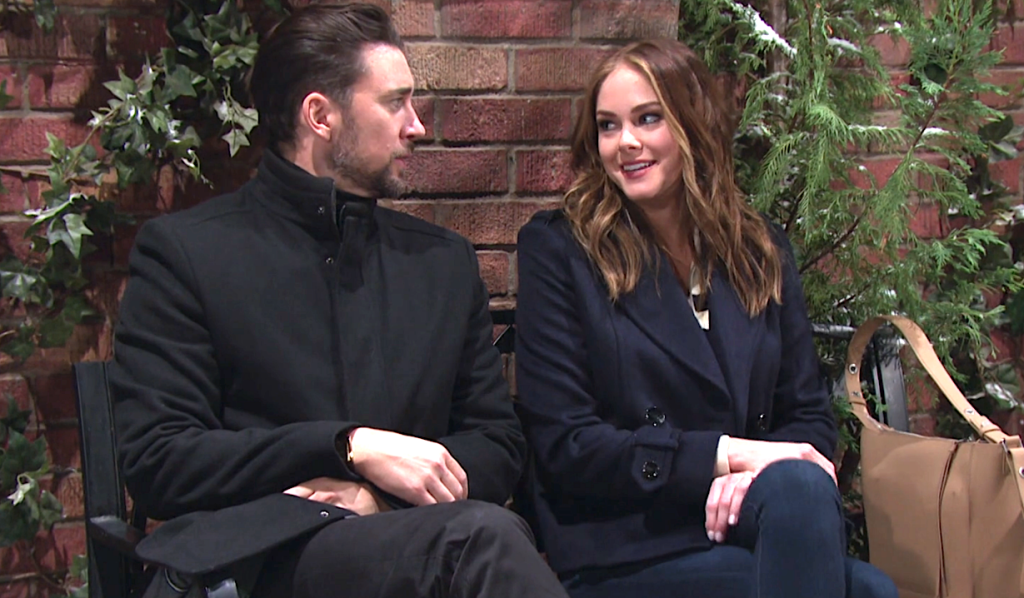 Later, Stephanie sits with Chad on the bench. She admits she overheard what Alex said to him and assures Chad she disagrees with him. Chad doesn’t want to be a problem with her and Alex. Stephanie insists it’s Alex’s issue. Chad understands where he’s coming from, though. He wouldn’t want to share her with another man either. Chad is grateful for her friendship and for helping his kids get through Christmas, but the holidays are over. If she needs a break, he understands. She doesn’t. She likes spending time with them. Chad knows that’s what Alex’s issue is. Stephanie says too bad. Besides, they’re just friends. Chad points out they’re more than that, they’re family and will always be connected. He encourages her to let him know if he’s ever taking advantage of her or if it’s too much. She agrees and instructs him not to worry about Alex. He’s for her to worry about.

Next on Days of Our Lives: Rex is on hand when Kate gets bad news, and Brady plays hardball with Kristen.

Revisit Sarah and Xander’s rocky love story in our photo gallery below. 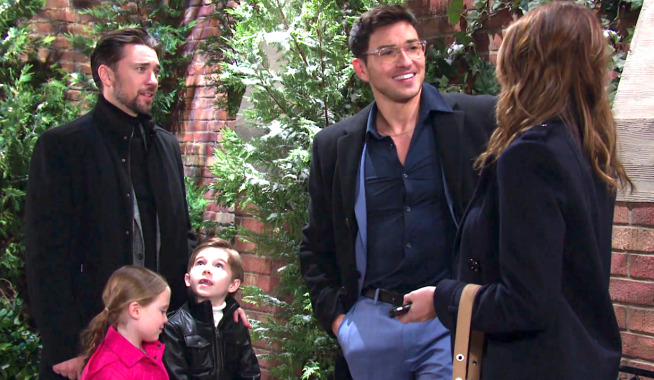 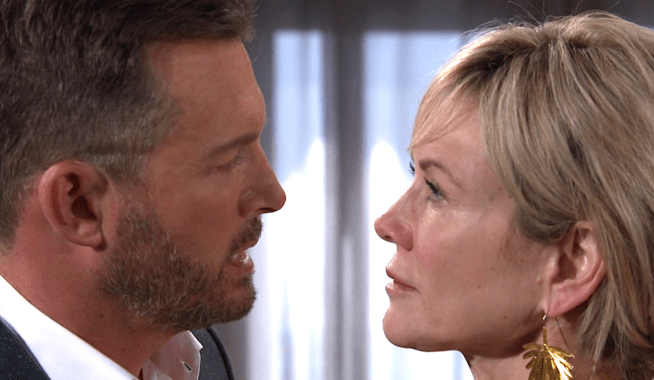