Wednesday, November 2, 2022: Today on Days of Our Lives, Nicole and Eric "smolder," Wendy's first day on the job proves eye-opening, and Kristen has more plans for Chloe. 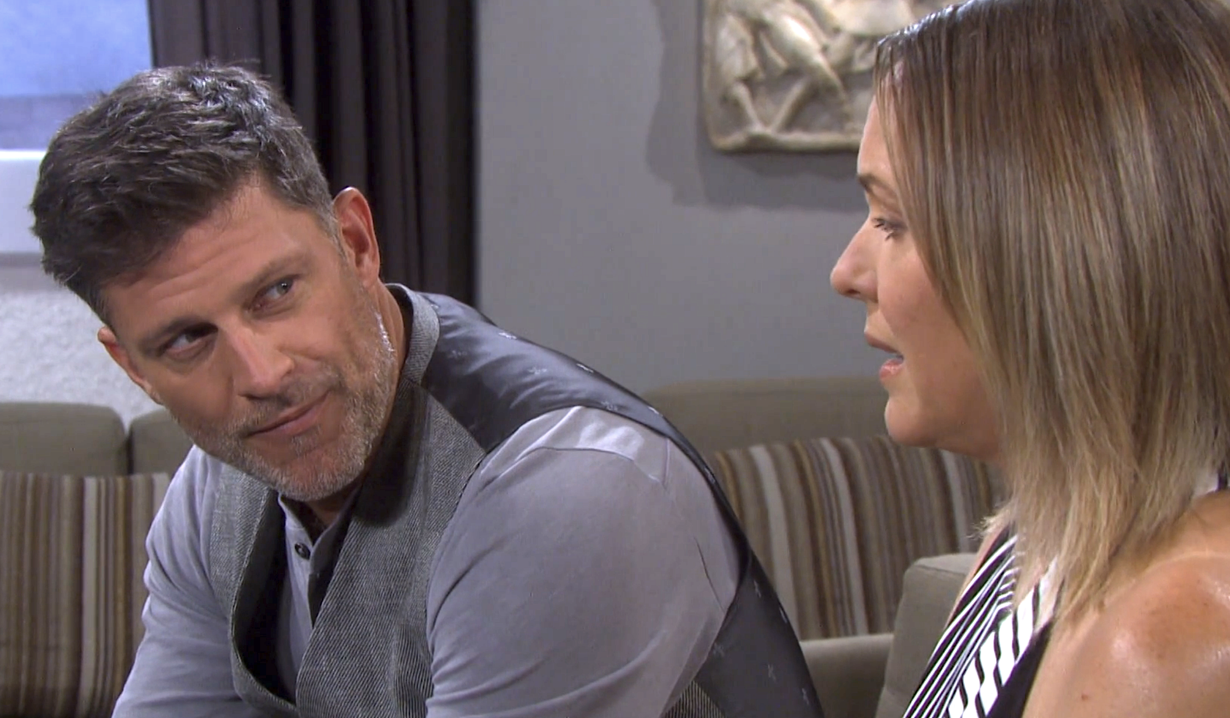 At the apartment, Johnny and Wendy break their charged stare to discuss their plan to expose EJ and Li. Johnny is eager to bring his father down, but Wendy worries because she loves her brother. 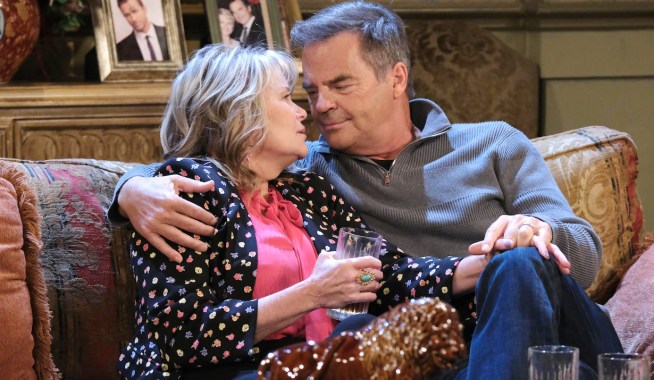 In the Square, Gabi tells Rafe about running into Stefan on Halloween. However, she has Li, and they are getting married, so it doesn’t matter. Rafe wishes Nicole were as determined to stay away from Eric as she is to move on from Stefan. As they discuss it, Gabi spots Wendy and Johnny across the way and grows curious.

More: The recent exit that made zero sense 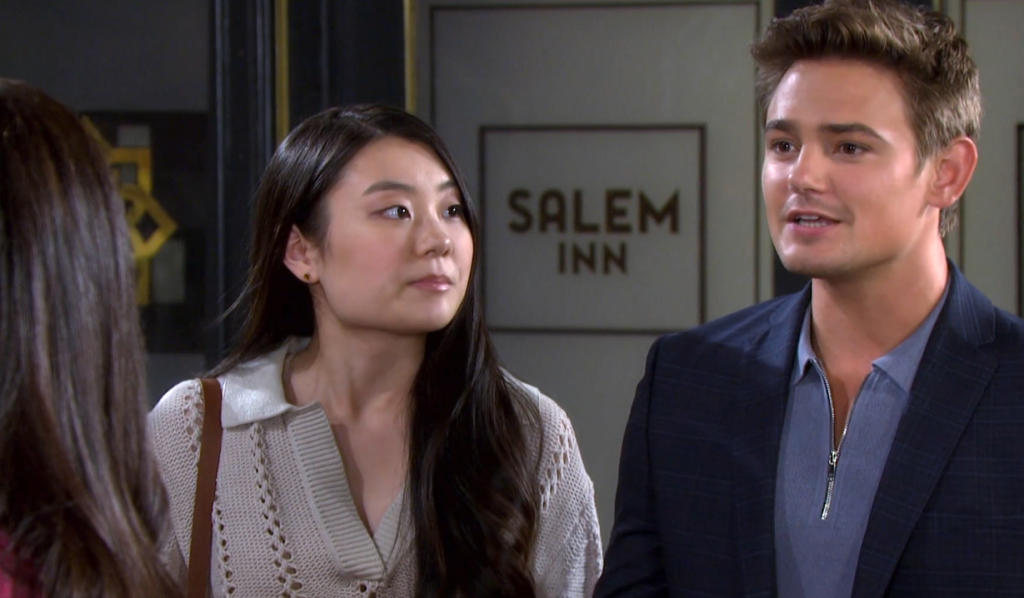 Johnny tells Wendy he doesn’t want her to do anything she doesn’t want to do, but Wendy wants to get to the bottom of things. Gabi approaches wondering what they’re up to. Rafe greets Johnny, who introduces his favorite ex-stepdad to Wendy, who is about to be Rafe’s new in-law. Johnny explains he offered to show Wendy around after hearing about her from Joey and Tripp. Gabi remains suspicious.

Rafe and Wendy head off to their respective jobs, but Gabi won’t let Johnny leave. She demands to know what he and Wendy are really doing. Johnny grins. He’s hitting on her in a subtle and charming way. Gabi relaxes and says she doesn’t want to see either of them get hurt. Johnny doesn’t want to see Gabi get hurt either. She wonders what that means. He brings up Stefan’s about-face when it comes to her. She tells him she was suspicious too, but she believes Rolf had nothing to do with it. She not so confidently adds that she and Li will be married and nothing will stand in the way of her happiness. 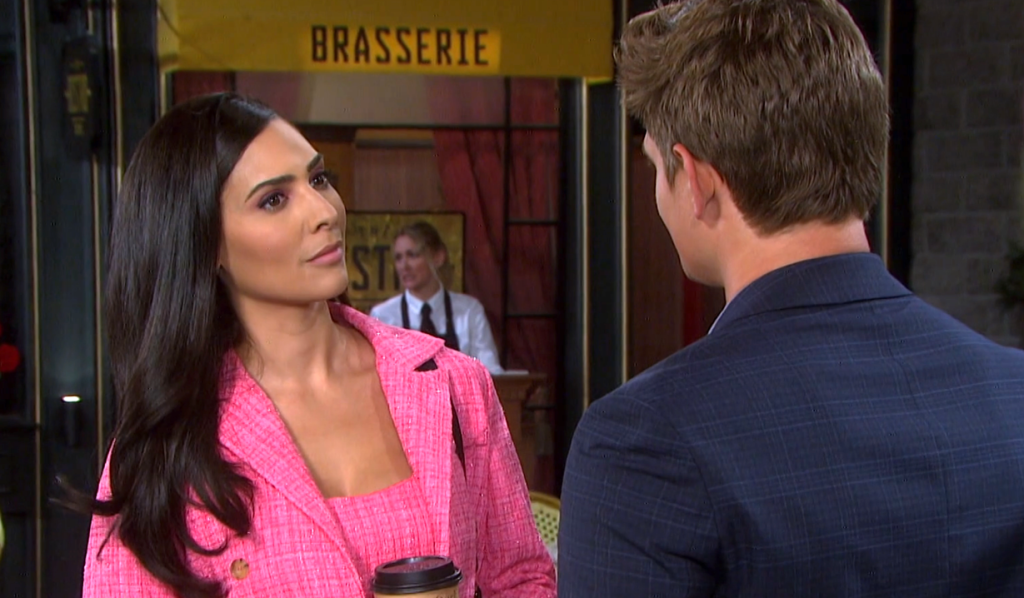 In the DiMera boardroom, Li talks with his father on the phone about Wendy’s promotion. He assures Wei that any mistakes she makes are on him. After hanging up, Kristen enters. She suggests that since he’s giving out promotions, he should give one to Chloe, so she’s as far away from Brady as possible. Li refuses, so she threatens to have Rolf undo Stefan’s programming. Wendy comes to the door and overhears Li claim that Rolf is long gone. He made sure of it, and EJ knows all about it.

Wendy drops her phone as she tries to record them and Li comes to the hall wondering what she’s doing. She lies that she was trying to take a selfie on her first day of work. After officially meeting Kristen, Wendy heads to her office. Kristen issues more threats to Li until he agrees to promote Chloe. After they leave the office, Wendy returns to the door. She calls Johnny, who is now at home, and tells him she thinks they were right.

More: Certain Salemites will be forever changed by Thanksgiving 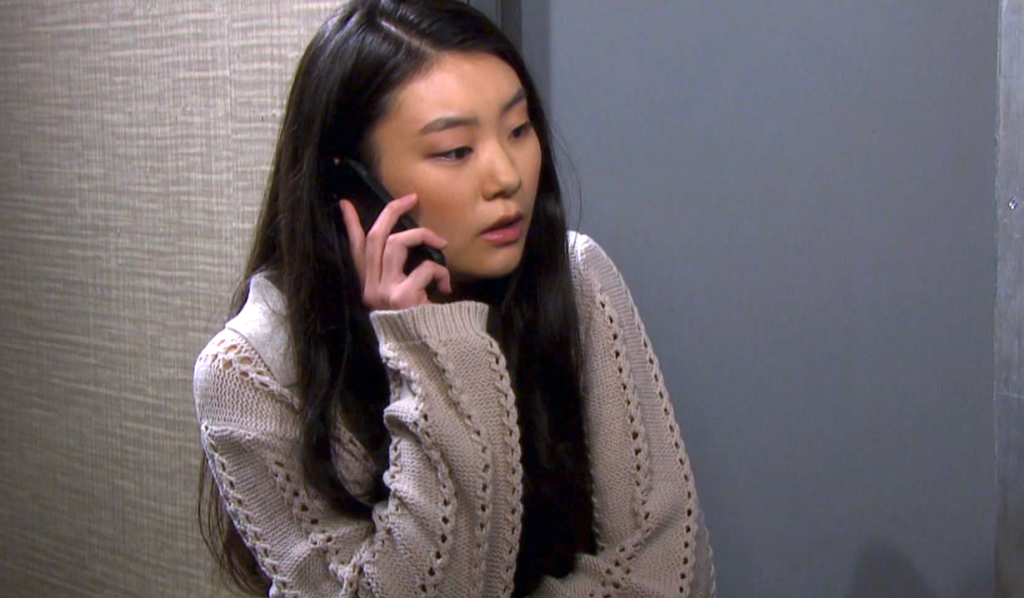 In his room at the Pub, Eric wears a towel around his waist as he serves Jada coffee in bed. He suggests they call in sick, but she has too much work. Nicole drops by to get Eric for a meeting at Titan about their Bella photo shoot. He leaves the room to get dressed, and Nicole apologizes to Jada for interrupting. Jada shoots back, “No you’re not.”

Eric and Nicole meet with Alex at Titan. He loves their photos so much that he wants to put Nicole on the cover. Eric obviously brings out something special in her because he can feel the tension in the photos, which are a game changer. 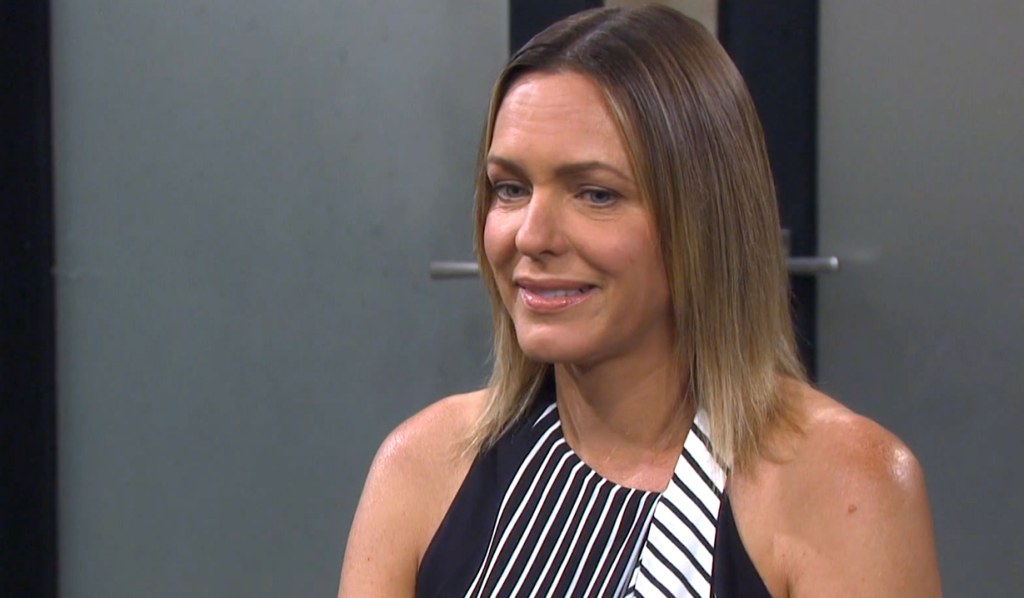 Jada meets with Rafe in the interrogation room as he preps to interrogate the biggest meth kingpin in the Midwest. She tells him about Nicole dropping by the apartment and the photos Eric took of her. It’s the first Rafe’s heard of this. He wonders if Nicole didn’t tell him because of how he’s been acting lately. They agree they have to trust their partners, but they both look uneasy. 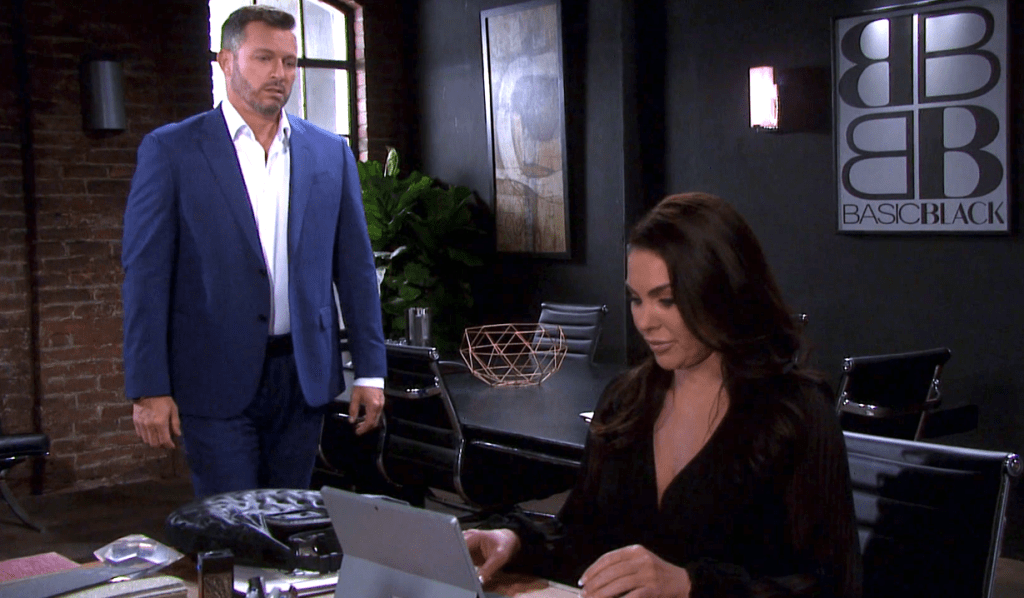 At Basic Black, Chloe rants on the phone to Nancy about Brady letting “that bitch” walk all over him. He enters with a hangdog expression. She hangs up and apologizes for making personal calls at the office. She gets to work because the new Bella issue is about to hit. Brady tries to apologize again, but it leads to a fight about Halloween. Brady worries about her being with Stefan after what he did to Abigail. She calls that’s rich considering Kristen just moved in with him. 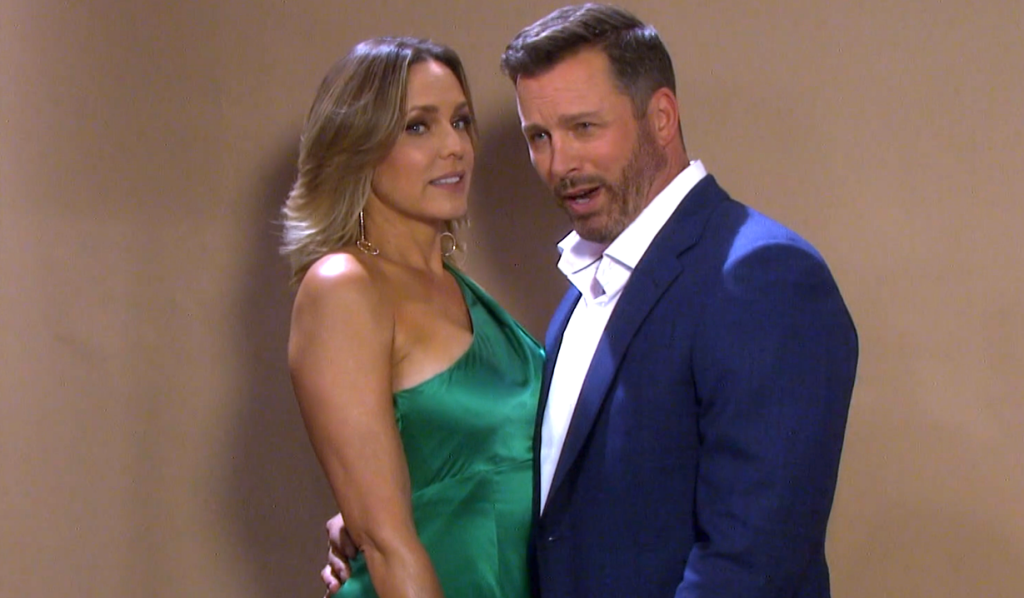 More: Could Paulina’s blackmailer be [Spoiler]??!!

As Chloe tries to get the truth out of Brady, Alex barges in with Nicole and Eric in tow. Chloe loves the idea of putting Nicole on the cover, but Brady wonders what Victor will think, considering he hates her. Alex assures his cousin he’ll handle Uncle Vic. Besides, they’re going to break the internet by resurrecting one of Bella’s top models from its heyday. Nicole deadpans that she wasn’t dead. Alex takes note of Brady’s suit jacket, which he got from Basic Black’s upcoming collection. Alex wants him to join Nicole in the shoot wearing it. Brady reluctantly agrees.

When Eric takes photos of an uncomfortable Brady with Nicole, Alex tells him to smolder. Over it, Brady walks out. Chloe follows him to ask what he wanted to tell her before Alex barged in.

Back inside the office, Alex picks up on the sexual tension between Eric and Nicole. He declares Eric is the one who needs to be in the suit because he knows how to smolder.

Next on Days of Our Lives: EJ catches Wendy.

Get more glimpses of Eric “smoldering” with Nicole in our photo gallery below. 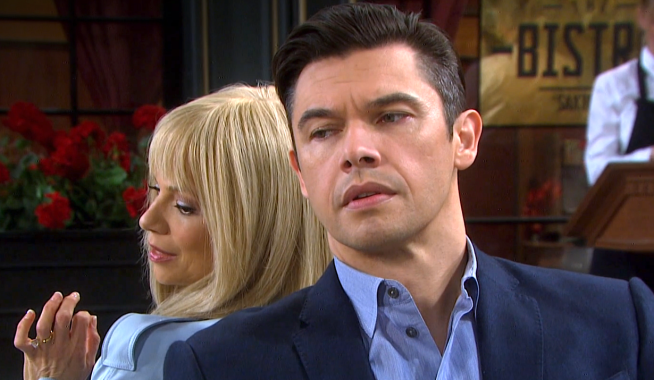 Chloe Runs From Brady In Tears After Accepting Li's Job Offer — Plus, Johnny Brings [Spoiler] In On His Plot Against EJ 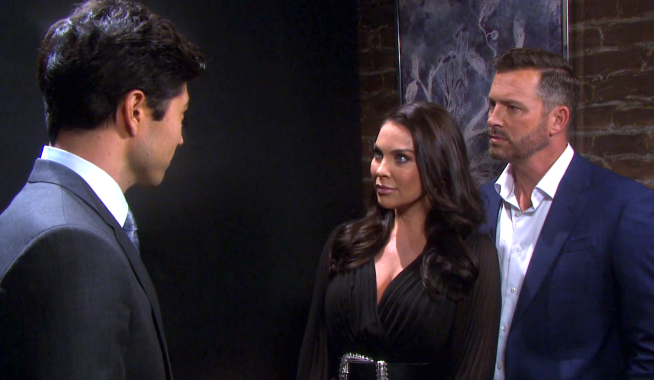