After EJ Thwarts Johnny, Wendy Receives an Unexpected Assist In Their Rolf Investigation — Plus, Gwen Refuses Ava Who Pivots to [Spoiler]

Thursday, October 20, 2022: Today on Days of Our Lives, Wendy's new job gives her an in, Stefan and Gabi sign papers, and Ava sees an opportunity. 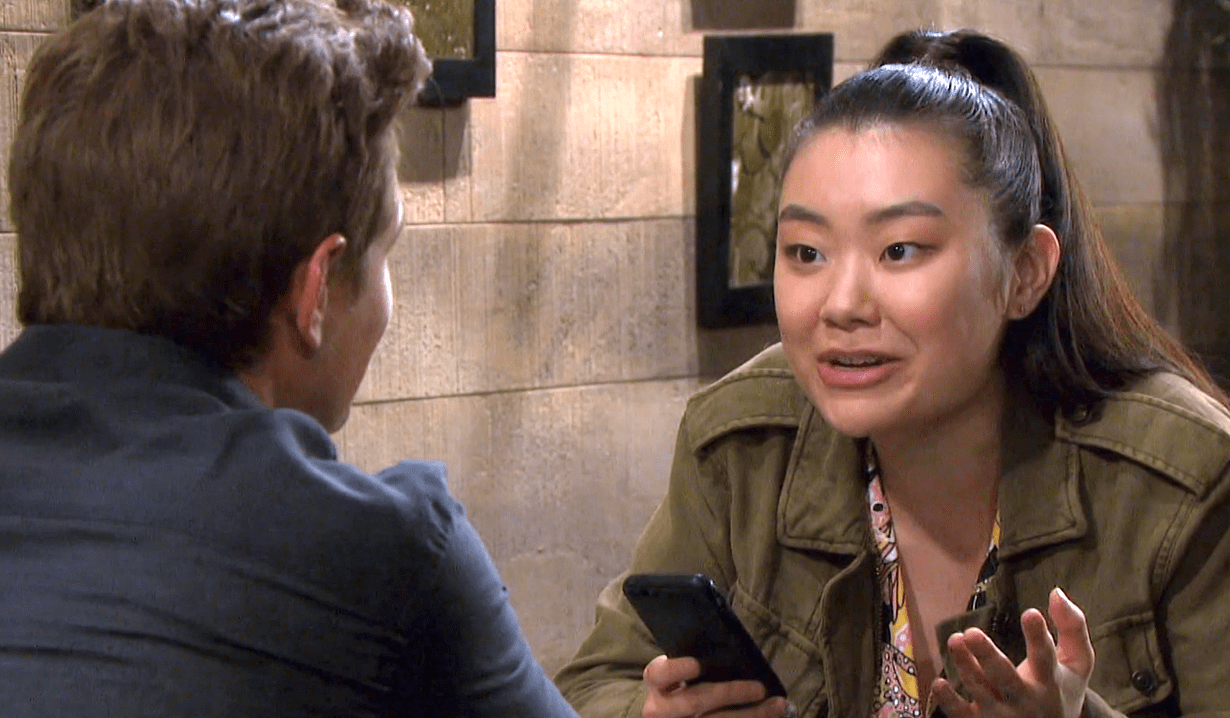 At the hospital, Jack declines Xander’s request for a job because he just hired Gwen. He points out tensions can run high in a newsroom, and there are often late nights. Inferring Jack’s meaning, Xander declares he would never cheat on Sarah because he loves her with all his heart. He still cares for Gwen, but that ship has sailed. Jack knows that, but he’s not so sure Gwen does. He quickly says it’s just a feeling he has, and he wants to support his daughter in making good choices. Xander understands. Jack offers to lend him some money, but Xander passes. He’ll figure it out. He always does.

More: Watch Emily O’Brien in the 1960s with a vampire 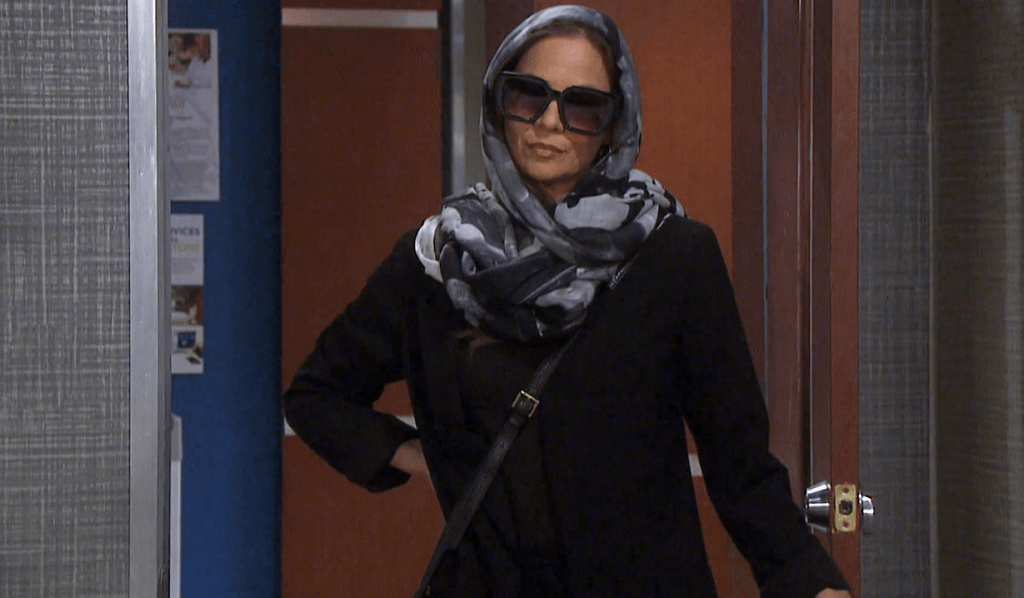 In Gwen’s hospital room, Ava recounts EJ exposing her fake marriage to Jake and banishing her from Salem. She needs Gwen’s help exacting revenge. Gwen refuses. She has to focus on being the daughter Jack deserves, and she won’t muck it up by helping Ava. She hopes Ava makes EJ pay, though.

After Ava’s left, Jack returns to Gwen’s room to take her home. She thanks him for giving her this chance after she’s disappointed him. She vows it won’t happen again. She’ll do everything she can to make him proud of her.

In the hospital corridor, Ava wonders who she’ll find to help her now and spots Xander. In her scarf and glasses, Ava shields her face and listens as he fails to haggle with the Salem Inn over his bill. When he heads to the elevator in frustration, Ava says to herself, “Problem solved.”

At Julie’s Place, Tripp tells Wendy about punching EJ. She makes an MMA reference, which makes Tripp like her even more. He lets her know Li defended him to EJ because he helped save her in Hong Kong. Wendy bemoans her brother still treating her like the little girl who used to follow him around. She thinks she might have an easier time if she conformed a little more. Tripp urges her never to change for anyone. She is amazing exactly the way she is.

Wendy brings up an article she read about him saving another woman’s life by throwing himself out a window. Tripp calls himself old school like that. She’s ashamed to admit she finds that kind of hot. She takes his bruised hand and remarks it must have been some punch. He notes it was more than one punch. She asks who else he hit, but Joey shows up before he can answer.

Joey hugs Wendy and sits with them. As they catch up, Wendy remarks that she doesn’t have a place to stay, so Joey invites her to stay with them. Tripp reminds Joey they live in Seattle, but Joey thinks they need to stick around Salem to help out with Kayla. The brothers bicker about who Wendy would bunk with should she move into the townhouse. Wendy stops them, kisses both on the cheek, and kicks them out so she can work.

At Brady’s Pub, Tripp hears from Ava and tells Joey they can get back to Seattle now that both their mothers are okay. They banter about Wendy again and agree she’s the perfect woman. Joey raises his beer bottle to her picking the best Johnson. Tripp raises his brow, and Joey says he knows what he means. Tripp does, and they drink to it.

More: Is a villainous clone about to rise from the ashes? 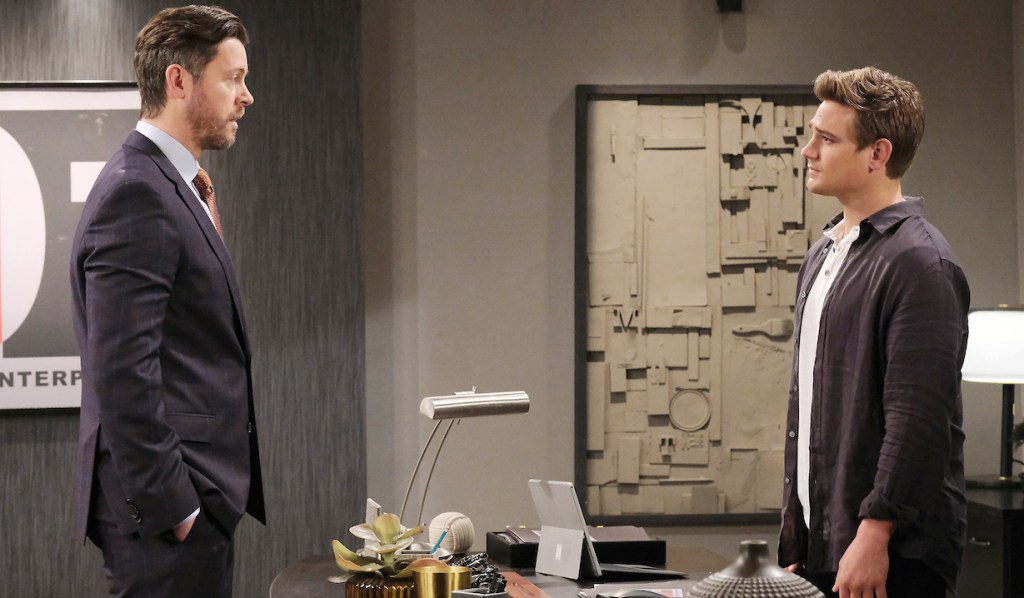 When EJ finds Johnny rummaging through his desk at DiMera, Johnny lies that he’s there to apologize for buying Ava’s act. EJ is skeptical. Johnny further states he wants to work at DiMera. He wonders what EJ’s working on these days and types at his keyboard. But, oh, it’s locked. “What’s your computer password?” he innocently asks. EJ closes the laptop and declares Johnny’s an artist who doesn’t belong behind a desk. After Johnny leaves, EJ calls to have security placed on all of DiMera’s electronic devices.

More: The storyline that could shake things up for Rafe 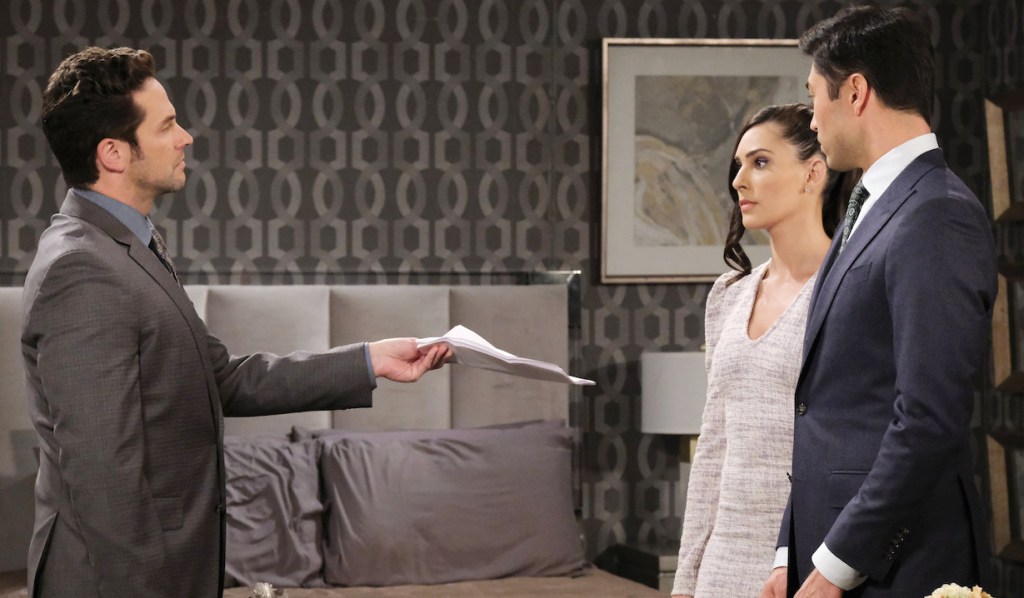 At the Salem Inn, Gabi explains to Li that Stefan is there with divorce papers. Li assumes they’re signed, but Gabi glares at Stefan and says, “Not yet.” Li looks over the papers and volunteers to be a witness. Stefan signs first so he can be rid of Gabi once and for all. When it’s her turn, Gabi hesitates, but then declares Stefan heartless and signs. After Li signs, Stefan leaves to file the papers himself, so there’s no doubt their marriage is permanently over.

Alone, Li asks if Gabi is okay. She plays it off and asks about his first day as second in command at DiMera. Li assures her he’s just biding time until he rids the company of all DiMeras. Then it will be the two of them — Shin-Hernandez Enterprises. Gabi counters, Hernandez-Shin because she likes to be on top. “Oh, believe me,” he grins. “I know.” They make out, which leads to sex. After, she asks why he came home from work. He mentions Wendy, and Gabi tells him he should hire her because she’s a rock star. Li notes maybe he does need to reconsider. 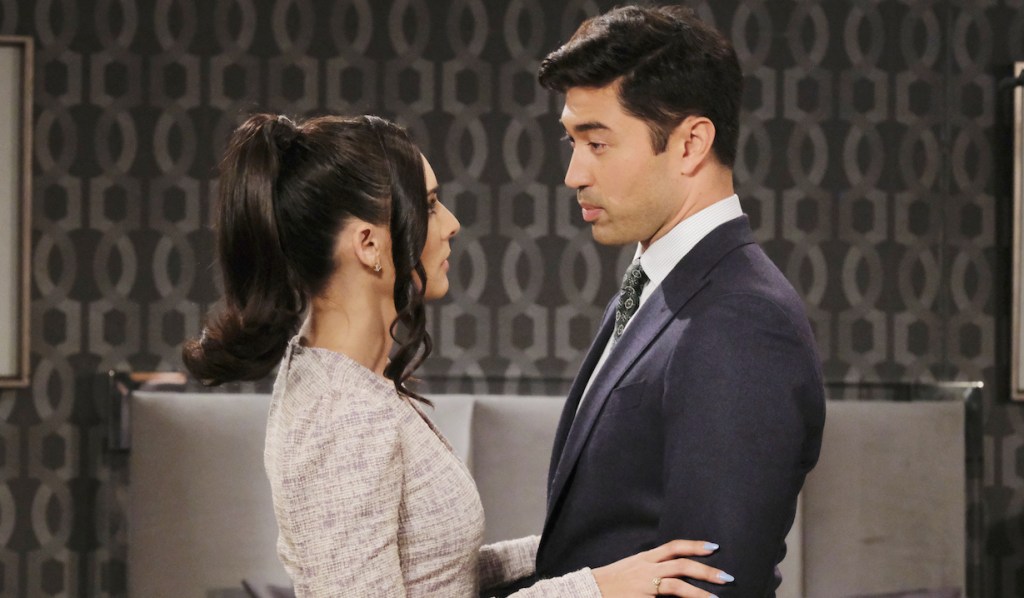 Johnny returns to Wendy at Julie’s Place. He failed to get EJ’s password, but he’s confident his father didn’t suspect anything. Wendy gets a message from Li, who offers her a job. She tells Johnny this will get them one step closer to learning the truth about Rolf.

Stefan returns to DiMera and tells EJ he just got divorced. EJ thinks Stefan should be over the moon to have Gabi Hernandez out of his life forever. Stefan forces a smile.

More: How will ‘Stabi’ finally reunite? 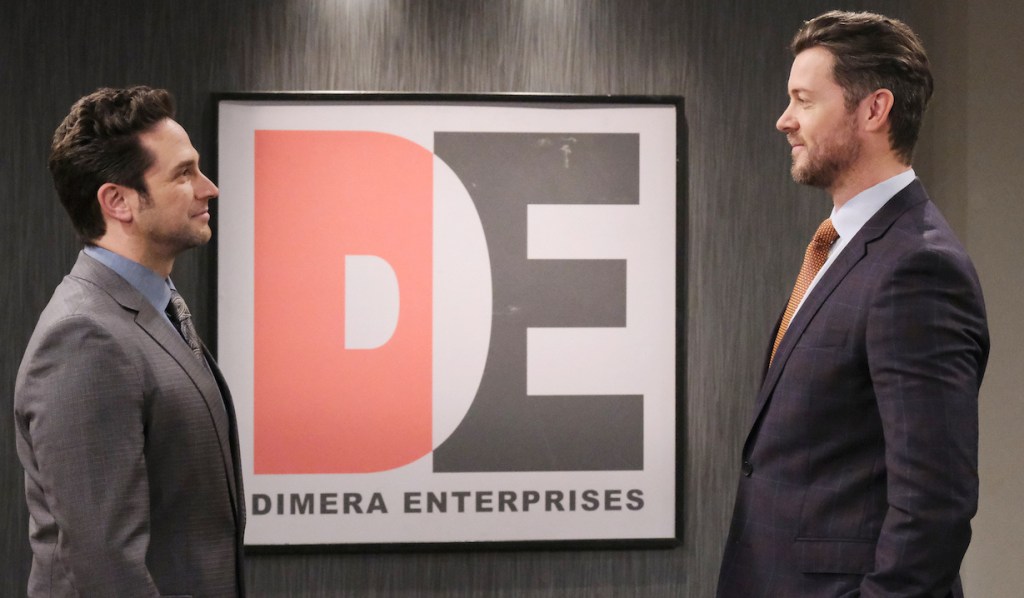 Next on Days of Our Lives: Eric receives stunning news, and Gabi gets a potentially game-changing tip from Rafe. 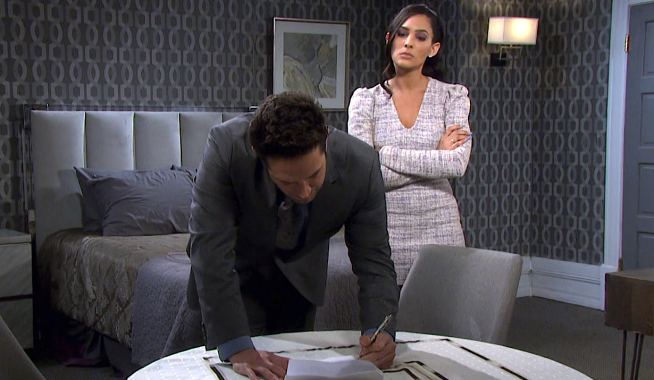 Gabi Receives Divorce Papers, But It's Stefan Who Can't Bring Himself to Sign Them — Plus, [Spoiler] Resurfaces 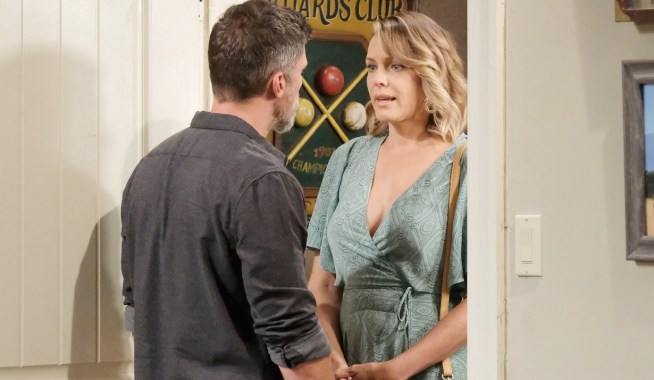