Justin comes home to an excited Bonnie who tells him Nancy and Clyde are getting married. And it’s all because she helped Nancy get on the dating app. A less enthused Justin points out Clyde is a criminal, who he believes had Sonny stabbed several years ago as a message to Victor. 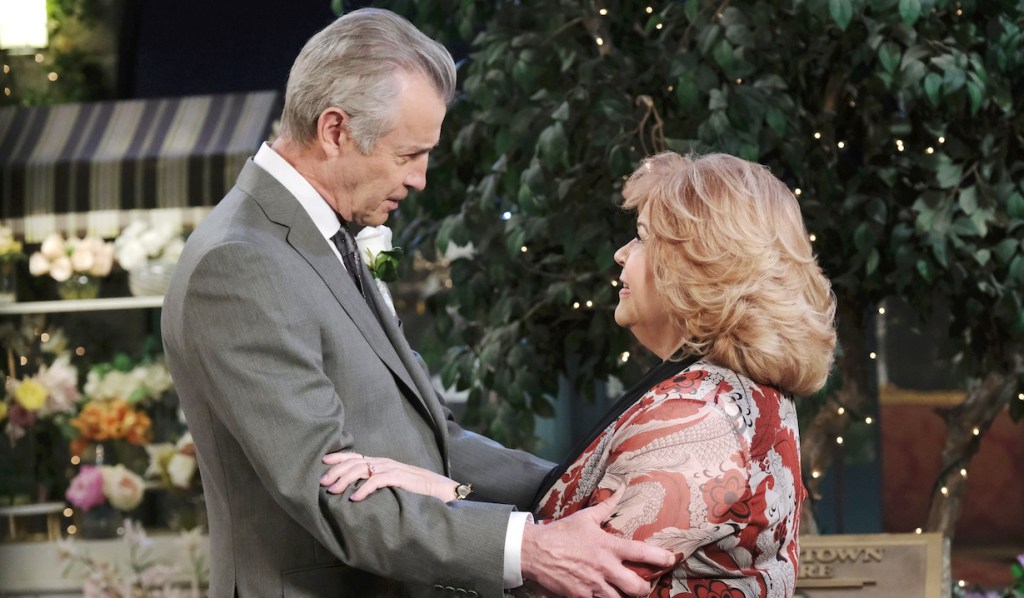 In the Square, Clyde and Nancy revel in their impending nuptials. Clyde announces he’s one lucky man to have her in his life. He’s forever grateful she took a chance on him on that dating app. As Nancy rushes off to make herself beautiful for the wedding, Belle walks up. Clyde cryptically asks how EJ is doing and tells her to send his best. Belle tenses and then gapes as he tells her he’s off to marry Nancy. 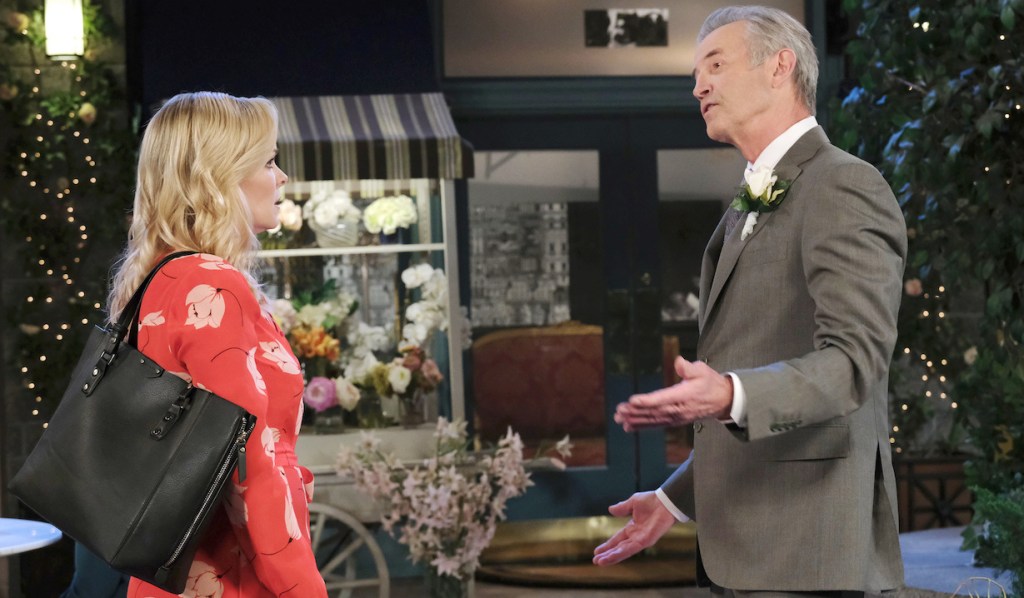 More: How Days can fix its Alex problem

Back at the Kiriakis mansion, Alex calls Justin about his and Sonny’s argument. Justin leaves the room to call Sonny and sort it out. Nancy rushes in desperate for Bonnie’s help in getting ready for the wedding. After Bonnie makes Nancy over, she gives the bride a bouquet wrapped in blue. The flowy, floral dress is borrowed and also happens to be new, but the pearls are vintage. Nancy tears up and thanks her. She’d love it if she and Justin would come to the wedding.

Justin returns with a somber expression. He gently tells Nancy that Sonny remembered that Clyde is the one who recently stabbed him. He also murdered Abigail. Nancy doesn’t believe it, but Justin urges her to rethink the wedding. Through tears, Nancy declares that Clyde is innocent and that he loves her. She’s getting married today, and nothing Justin can say will stop her. She thanks Bonnie for her help, but disinvites her to the wedding.

After Nancy leaves, Bonnie reminds Justin she was a rotten person once too, but she changed. Maybe Clyde has too. Justin loves that she has such a forgiving heart, but not everyone is able to turn their life around as she did. Bonnie thinks love could have saved Clyde as it did her. Justin agrees to talk to Sonny again.

At the Salem Inn, Craig tells Chloe he can’t be the one to interfere in Nancy’s marriage. Chloe begs him, but Brady suggests they all take a minute. Chloe panics. They have to do this now. She reminds Craig if they didn’t interfere with his marriage he’d be broke and married to a con artist. Craig says Nancy’s made her choice and Clyde paid his debt to society. From what he’s seen, he’s staying on the right side of the law. Chloe reminds them Clyde abused his children, but Craig dismisses it. He suggests they show Nancy their support. Chloe looks to Brady for backup, but he thinks they should stay out of it. It’s Nancy’s decision to make.

At the station, Jada calls for an arrest warrant for Clyde while Rafe leaves a message for Chad about the latest development. They rush out to find Clyde. More: The truth is out in Days promo

In the DiMera living room, Chad takes a gun out of the safe. EJ wonders what he’s doing. A stoic Chad says he just came to pick something up. EJ asks about Abigail’s murder case, and Chad tells him Leo is innocent. “It was Clyde Weston,” Chad growls. “Now, I’m going to make damn sure he pays.” He adds that EJ should have told him Clyde threatened their family to begin with. EJ wants to help, but Chad tells him to go to hell and leaves.

In front of the City Hall doors, Clyde takes a deep breath and straightens his tie and boutonniere. When he turns to the doors, Chad sticks the gun in his back and leads him away. Belle comes to the DiMera mansion as EJ leaves a message for Chad. She relays the unsettling interaction she just had with Clyde. EJ in turn tells her Clyde murdered Abigail. He’s worried about Chad and declares he’ll handle Clyde himself. He opens the safe and discovers the gun is gone. He realizes Chad took it with plans to kill Clyde. Belle wants to call the cops, but EJ counters they need to find Chad before it’s too late. However, EJ agrees Belle can call Shawn on the way. 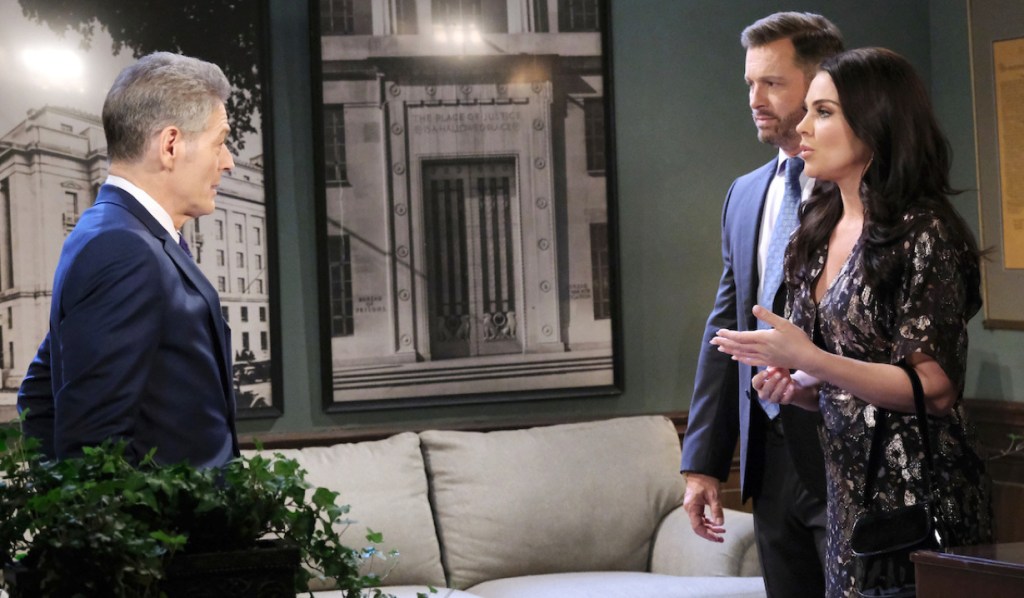 In a room at City Hall, Craig, Chloe, and Brady wonder where the bride and groom are. Chloe suggests they leave, but Craig won’t bail on Nancy. Rafe and Jada burst in, announcing they believe Clyde is Abigail’s killer. After filling the group in, Nancy arrives. She deduces the cops are there because of Sonny’s accusations. Chloe tells her the video footage of Clyde’s alibi was altered. Nancy cries. Rafe puts out an APB, and Nancy runs out of the room.

Nancy returns to Bonnie in tears. She confirms that Justin was right about everything. Bonnie holds her as she sobs. 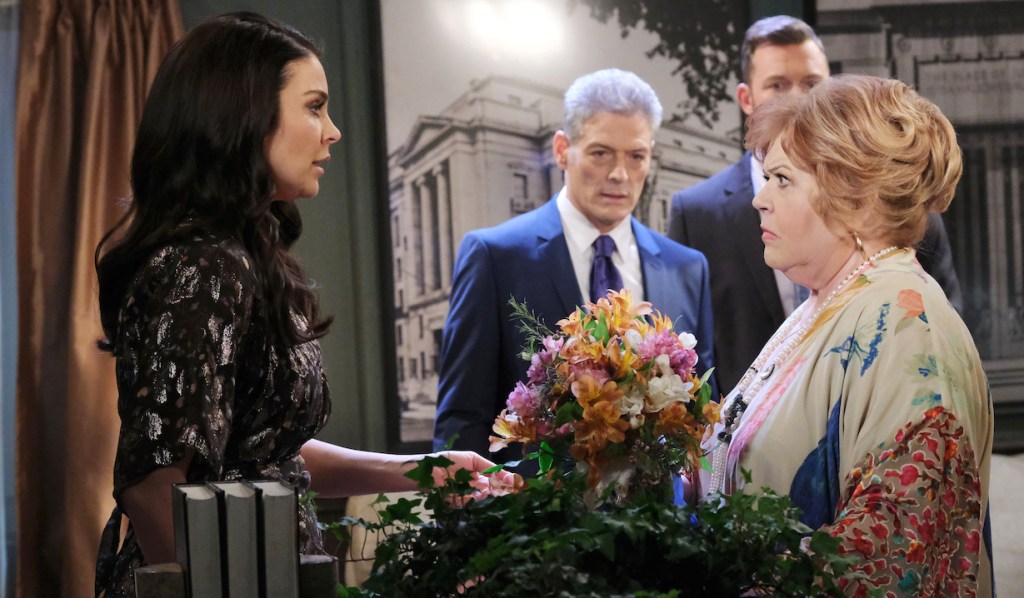 Chad brings Clyde to Abigail’s headstone and forces him to his knees. Chad demands to know why he killed her. Clyde says it wasn’t him. He has an alibi. With the gun pointed at Clyde’s head, Chad shouts, “Wrong answer!” He informs him the cops know the footage was tampered with. So, why did he slaughter his wife? Clyde says Abigail wasn’t the one he meant to kill — Belle was the one he was after.

Clyde recounts planting a bug at the mansion. As he listened to the recording, he heard EJ tell Belle that Clyde had him shot years ago. While Belle talked EJ out of killing him, she planned to go after him legally. So, he decided to send a message. But when he got to the mansion that night, EJ and Belle were nowhere to be found. So, what, Chad asks, he just killed Abigail? Clyde insists that’s not how it went down. Chad screams for him to stop telling him what didn’t happen and tell him what did happen. He wants to know everything about how he killed Abigail. Clyde doesn’t think he wants that, but Chad orders him to stop stalling. He warns he saw a freshly dug grave. “Why don’t we try that on for size?”

Next on Days of Our Lives: Belle and EJ search for Chad, and Jack learns the truth. 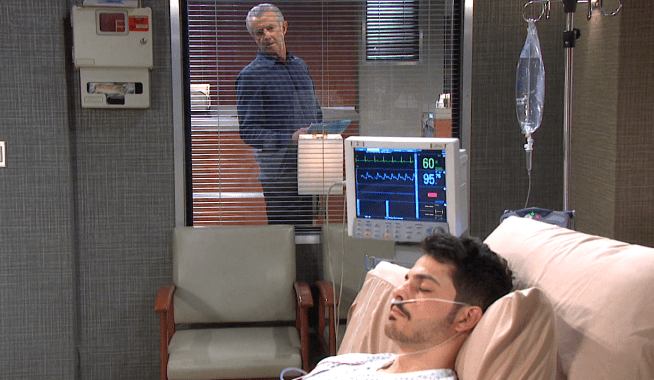 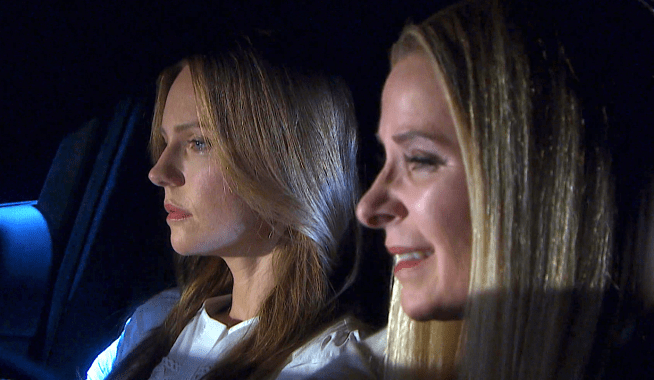