A Stunning Betrayal Could Change Everything In Abigail’s Murder Case — Plus, Eric and Nicole’s Sexy Dreams Lead to an Awkward Discovery

Thursday, August 25, 2022: Today on Days of Our Lives, Sloan pressures Leo after he forms an alliance with Gwen, Eric and Nicole dream of each other, and Stephanie knocks Alex off his feet
. 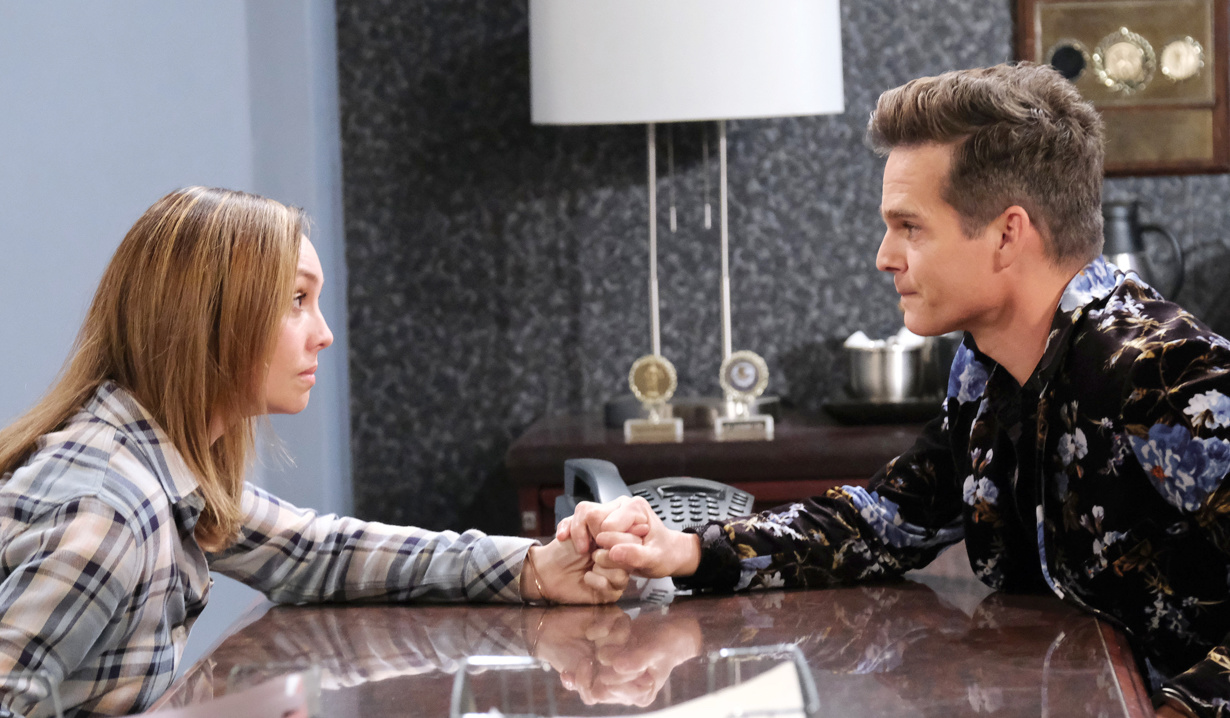 In his room, Eric lies asleep in bed. There’s a knock at the door. He answers it to Nicole in a red dress. She pulls him into a kiss and pushes him back to the bed. Eric bolts awake.

In Nicole’s bed, she wakes up to a knock at the door. She opens it to Eric. He kisses her and lays her back on the bed. Nicole smiles in her sleep and then jolts upright.

More: How to watch Days this fall 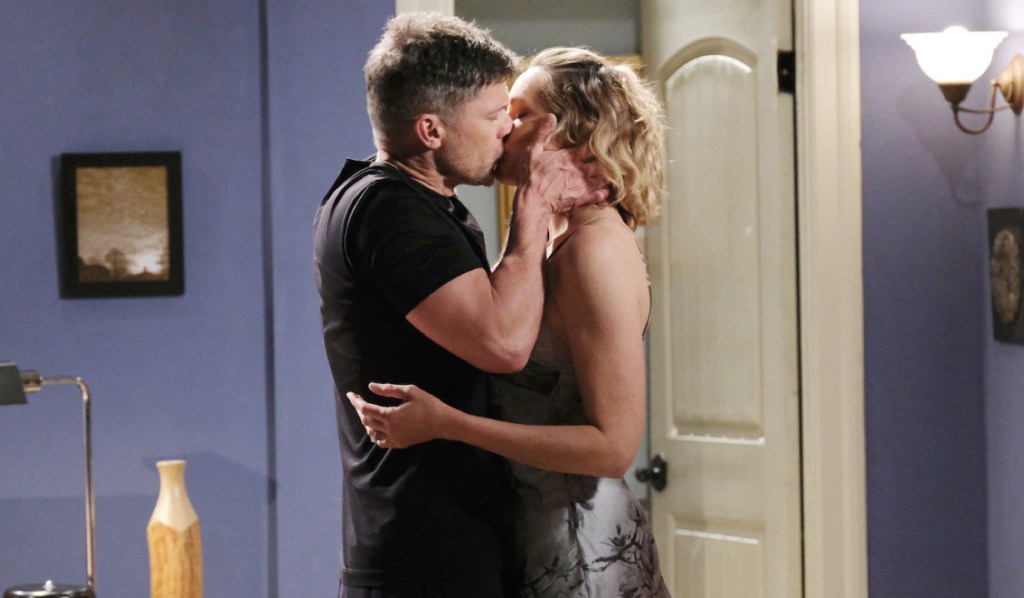 Jada comes to Eric’s room in just a t-shirt. She thinks her air conditioning is broken. It’s like a sauna in her room, she says. Eric clears his throat and responds that it’s hot in his room, too. Eric offers to take a look at it, but she suggests he do it later and kisses him. She pulls back, apologizing. She’s not usually so forward. He moves in for another kiss and lowers her to the bed.

After sex, Jada tells Eric she’s kind of embarrassed. She doesn’t usually do this kind of thing. It’s her first time since her divorce. Eric admits it’s been a while for him too. Jada grins and says she couldn’t tell. She asks if it’s the first time since he was a priest. He says, since Nicole. They chuckle over things going from zero to sixty with them. Eric says these things can just happen and take over. She grins and kisses him. They make plans for breakfast, but Jada asks to take a shower first. He leaves her in his room to check on her air conditioning.

More: Grey’s star weighs in on question of ‘Japril’ return 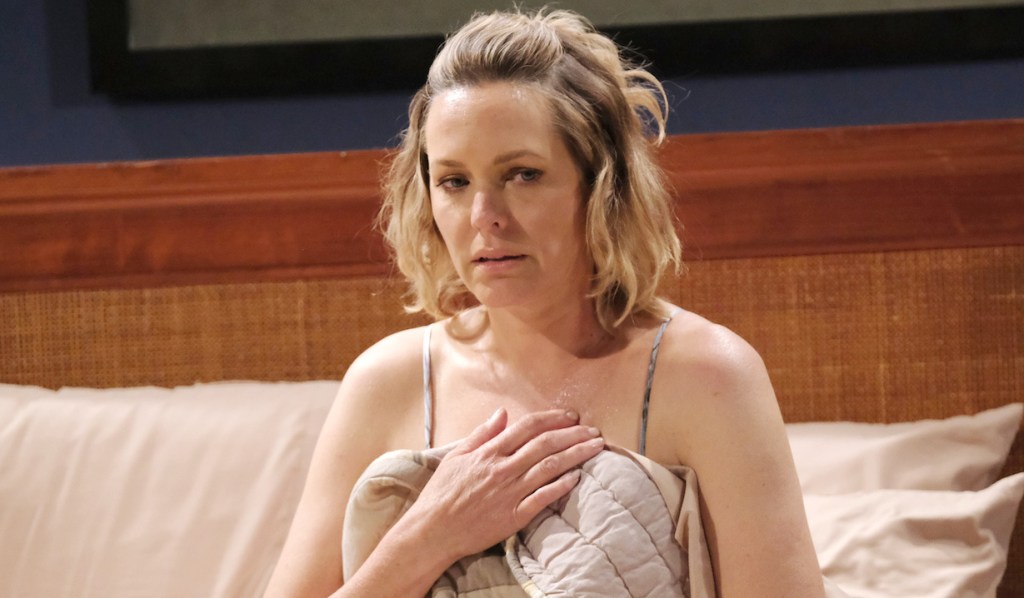 Rafe brings Nicole breakfast in bed. He notices she’s flushed and that she feels warm. She’s not sick, she says, but there is something she needs to tell him. She gives him a guilty look, but just says he’s the sweetest, sexiest, most amazing husband a woman could have. She kisses him.

After Rafe leaves for work, Nicole picks at her breakfast and calls Chloe. She confesses that while she doesn’t regret marrying Rafe, she can’t stop thinking about Eric. Chloe thinks she’s still just feeling protective of Eric where Jada is concerned, but just because they’re living under the same roof doesn’t mean they’re sleeping together. Nicole thinks she should talk to Eric to get it out in the open. Chloe counters she should keep a lid on that one, but Nicole muses that if she tells Eric about the dream, he’ll call her ridiculous, and they’ll laugh. Then, that will be that. Chloe thinks it’s a bad idea. “When has that ever stopped me,” Nicole deadpans.

Nicole knocks on Eric’s door. Jada answers, wrapped in a towel. Nicole looks past her to the rumpled bed. 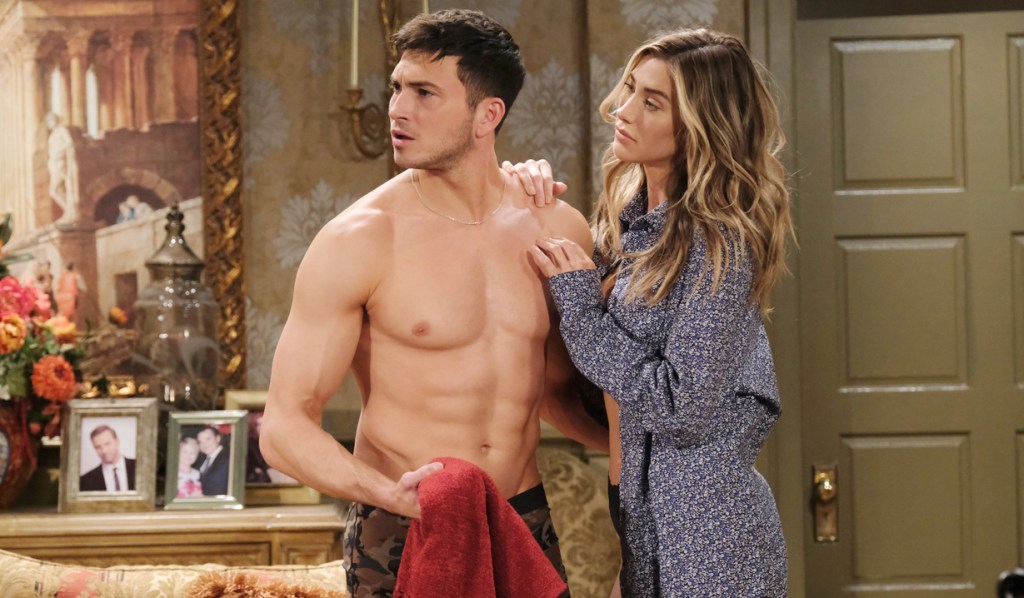 Dressed in a suit, Sonny walks into the Kiriakis living room to find a half-naked Sloan straddling a half-naked Alex. Sonny tells her to get the hell out of his house. Alex wonders why he’s being so rude. Sonny retorts Sloan is Leo’s lawyer. Alex is surprised to learn she’s a lawyer, but Sloan says she told him several times. Sonny rails at her for her sleaze of a client. Alex says his brother is right, Leo is garbage. He can’t keep sleeping with her unless she dumps him as a client. Since her career comes first, she leaves — in nothing but her lingerie. Alex bites his hand. Sonny glares at his brother. “Really?” 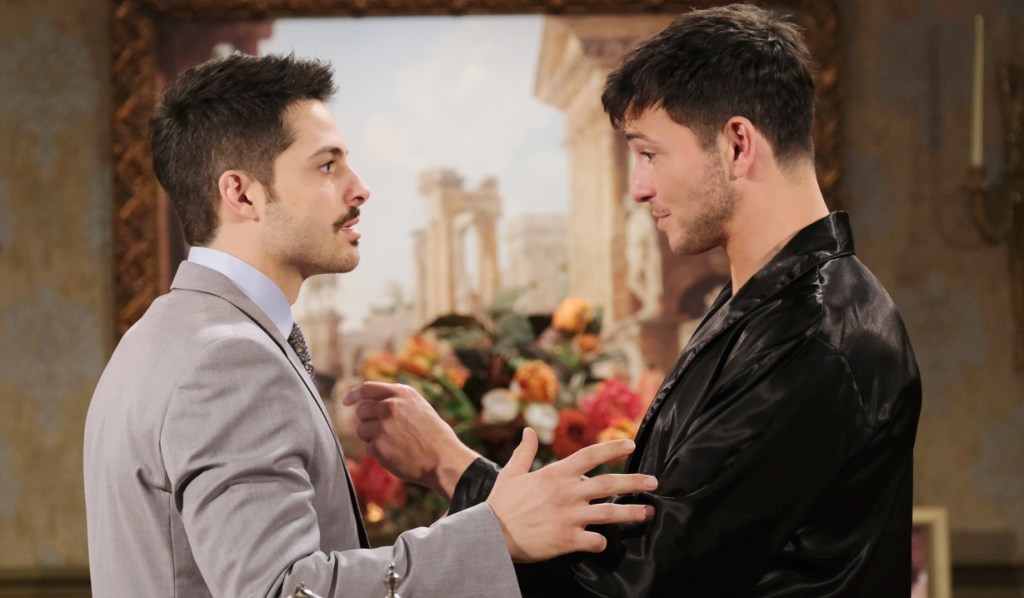 More: Former 90210 star, who passed through Salem, has died

At a table in the Square, Chad admits to Stephanie he avoided dealing with his grief until now. They discuss the arrests in Abigail’s murder. Chad is hopeful there will be a conviction, but it still won’t bring back his wife. She was the love of his life and always will be. Stephanie can’t imagine what that would feel like. She was engaged to Philip a million years ago and briefly dated someone last summer, but he was a womanizer. She gets a message about her new job and says she’ll be sticking around Salem for a while. She offers her ear if he ever needs one.

Later, Stephanie walks through the Square and literally bumps into Alex, who stumbles to the ground. He looks up at her wide-eyed and panting. He hears Sonny’s words about meeting the right person. 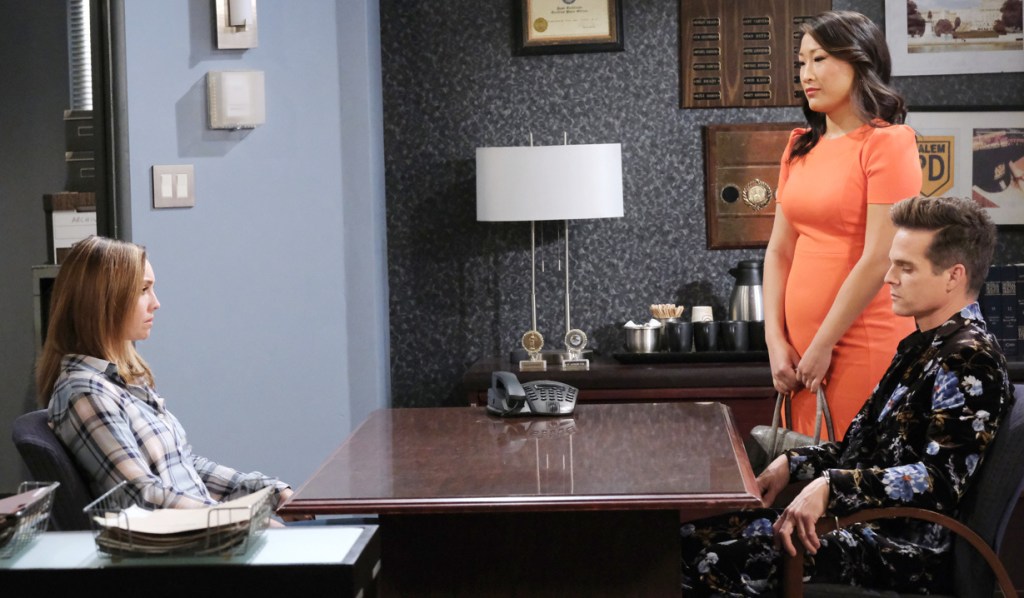 Trask brings Gwen to visit Leo in the interrogation room. Leo has nothing to say to her, but Trask thinks they have loads to talk about since they’re both being charged with murder.

After Trask leaves, the besties argue and throw accusations. Gwen tells Leo she wore the mask to set up Sarah, not to kill Abigail. He asks if Rafe believes her story. She tears up and tells him he’s the only friend she has in this whole miserable world. All she cares about is if he believes her. Leo does and apologizes for doubting her. Chained to their chairs, they struggle to hug across the table and agree to present a united front. Leo suggests he get Sloan to represent her too. Then, they’ll write a book, which will be turned into a movie, and they’ll go to the Oscars. 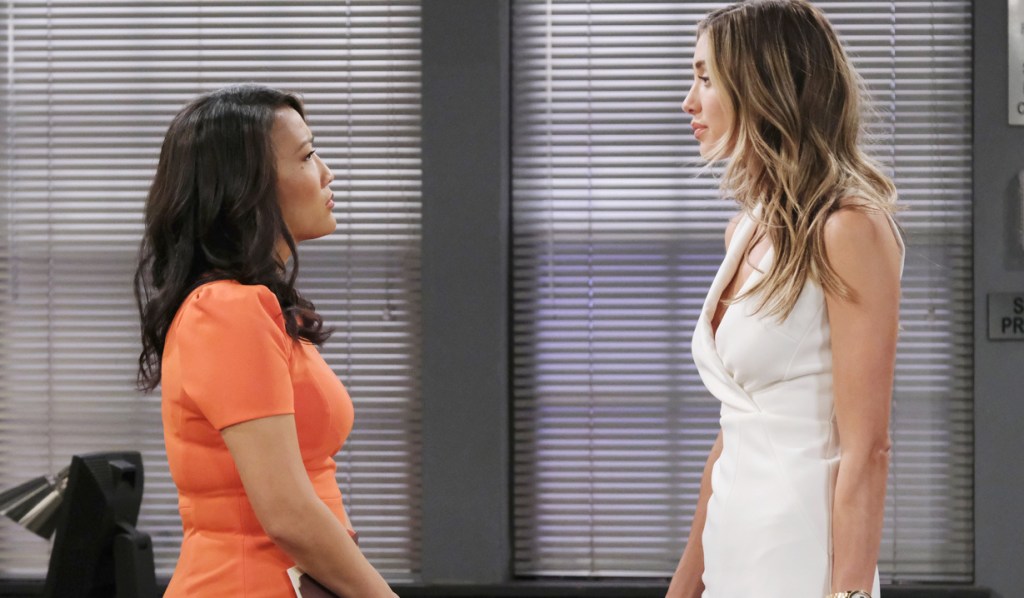 Sloan arrives at the station to demand Trask cut Leo loose. Trask will only do that if Leo can give her the final nail in Gwen’s coffin. Sloan talks with Leo alone and says it’s only a matter of time before everyone finds out he was in the room with the murder weapon. So, he needs to give Trask something that will tighten the rope around Gwen’s neck. Leo doesn’t have anything. Sloan suggests he come up with something before Trask finds out about him and the knife.

Later, Gwen waits with Rafe in the squad room. Leo comes out with Sloan, and Trask meets them. Leo apologizes to Gwen. He tried, he really did, but he can’t lie for her anymore. He had to tell the truth. “I told them what you told me,” he says. “That you killed Abigail.” 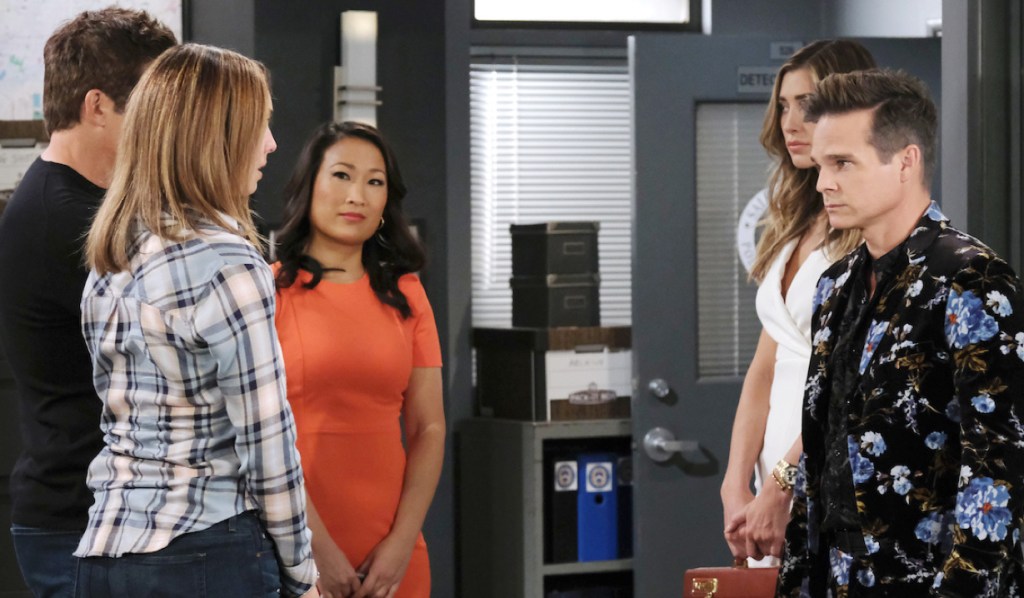 Next on Days of Our Lives: Nicole gets a surprise in Eric’s bedroom, and Alex’s head is turned.

Relive Eric and Nicole’s love story in our photo gallery below. 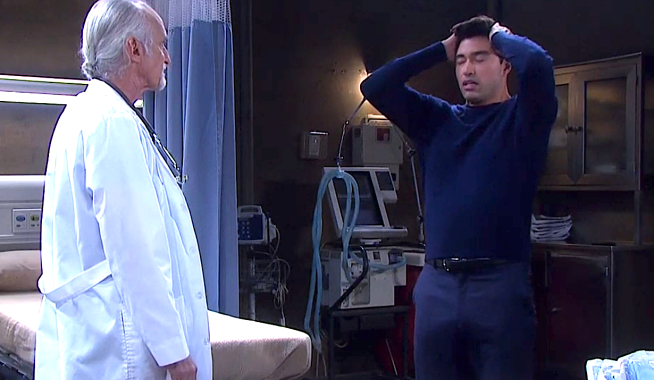 Ava Comes Face to Face With Stefan, While Kayla and Marlena Overpower Orpheus — and Run Into Another Obstacle

Stephanie Is Less Than Impressed Upon Meeting Her Admirer/Cousin — Who Won't Take No For an Answer — Plus, Someone Lurks Around the Pub 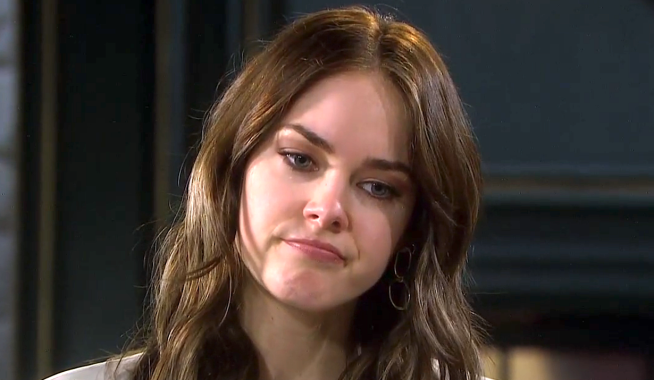