Thursday, August 18, 2022: Today on Days of Our Lives, Leo looks out for number one, EJ gains leverage, Stephanie prepares for a mystery meeting, and Kayla gives Chad much needed advice. 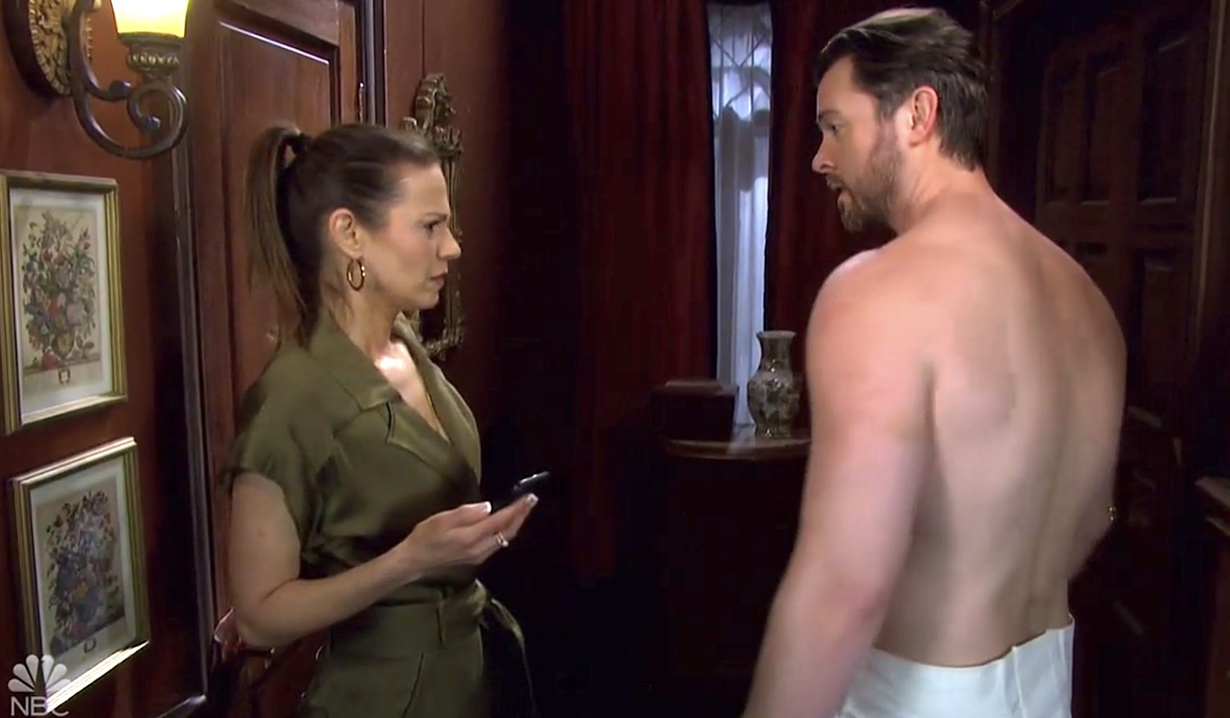 At home, Steve lowers his gun when he discovers the intruder is Stephanie. He explains they’re using the alarm because Orpheus is targeting their family again. He assures his daughter he found a way to eliminate him, but her mother won’t let him do it. Stephanie agrees that he can’t kill a guy for no reason. Steve retorts he has decades’ worth of reasons and she needs to go back to Seattle for her safety.

Stephanie reveals can’t leave because she has a mystery meeting with someone who wants to hire her PR firm. She’ll find out who they are tonight. Steve is confident it’s Orpheus. She calls him paranoid, but he wishes she and her stubborn mother would realize what a threat Orpheus is to them. Stephanie suggests they visit Kayla before her meeting. He agrees, but insists on accompanying her to her meeting.

At the hospital, Kayla tends to Chad’s bleeding hand as he rants about Leo and Gwen, and Jack defending his bad seed daughter. Kayla defends Jack for not wanting to believe one daughter is responsible for the other’s death. Kayla expresses concern for Chad’s wellbeing, but Chad assures her he’s not suicidal. He’s homicidal. He’d love five minutes alone with Leo to get justice for his Abigail. Kayla doesn’t think it will end his pain, but Chad doesn’t want his pain to stop. It’s all he has. If it goes away, he has nothing. He can’t let her go. He won’t let her go. 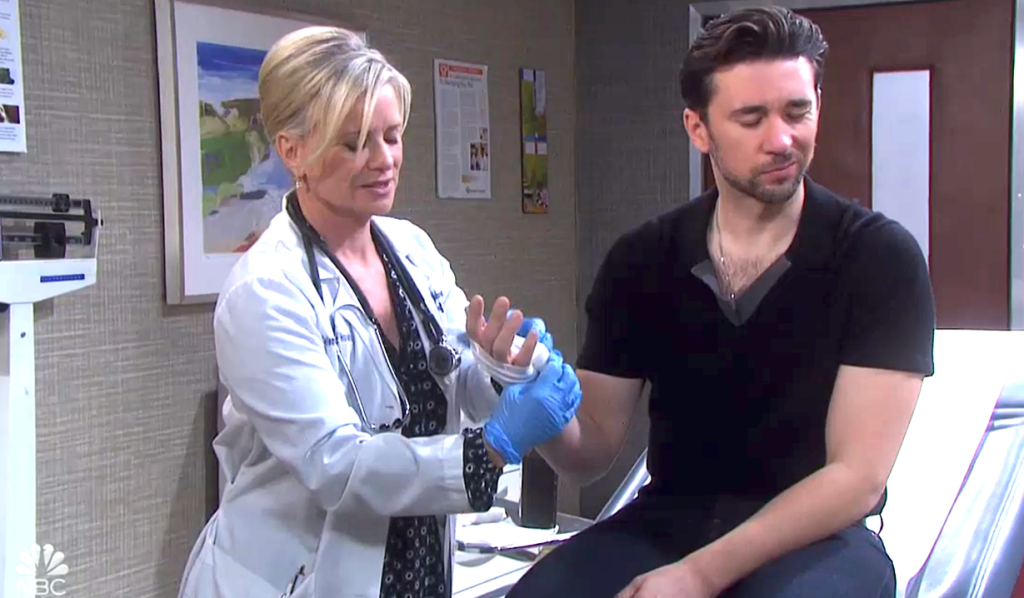 Kayla recalls wanting Lawrence Alamain to pay for what they believed was Steve’s murder. But she had to let go of her need for revenge for her children’s sake. Chad doesn’t think it’s the same thing since Steve came home to her. She urges him to find a way to deal with his anger and let it go. She suggests he find a grief support group so he can be kinder to himself and more present for his children.

In the lobby, Kayla suggests Chad stop by Marlena’s office on the way to get his prescriptions. He grins and says, “You win.” He thanks her and steps to the coffee station as Steve and Stephanie walk off the elevator. After Stephanie hugs her surprised mother, she offers Chad her condolences. 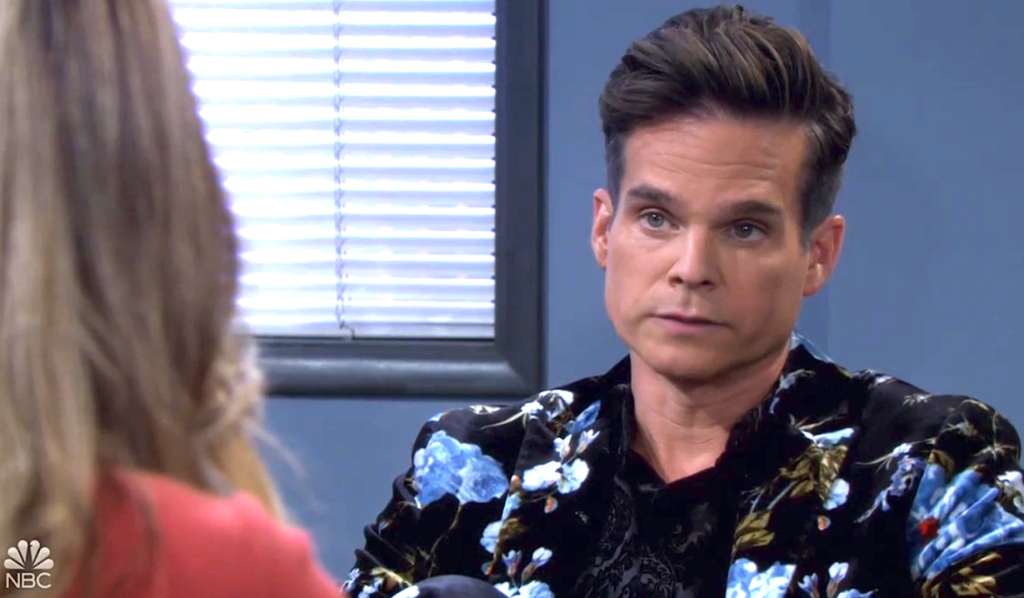 At the station, Leo’s lawyer, Sloan reminds her client she’s only taking his case for publicity and potential profits from future book sales. She then demands he not make promises he can’t deliver on. Leo assures her he can prove who killed Abigail. He hates hurting a friend, but, offscreen, he gives Sloan details on where to find the evidence.

Rafe enters the interrogation room and exchanges barbs with the “ambulance chasing” Sloan. She tells Rafe that Leo has evidence against Abigail’s killer. He’ll tell Rafe everything after he gets immunity. Rafe passes. He has witnesses and fingerprints. Rafe asks for the proof outright, threatening him with Trask’s wrath. Leo reluctantly agrees.

More: The soap couples we’re dying to see hook up

Upstairs at the DiMera mansion, Ava runs into EJ in a towel. They banter, and he invites her to join him next time in the sauna. For health benefits, of course. He gets in a dig about her short, but sweet marriage to Jake and strolls away.

Ava heads downstairs and answers the incessantly ringing doorbell to Gwen. The women snipe at each other until Gwen tells her Leo’s been arrested for Abigail’s murder. A now dressed EJ eavesdrops as Ava expresses her doubts over Leo’s guilt. He overhears Ava admitting to breaking Gwen out of prison the night Abigail was murdered. As Gwen waxes poetic about not hating Abigail and caring for her children, EJ makes his presence known. When Gwen relays her friend Leo was arrested for Abigail’s murder, he pointedly declares his hope that the cops nail Leo Stark to the wall, along with anyone else who was responsible.

Gwen leaves, and EJ insinuates she killed Abigail with Ava’s help. Ava denies any wrongdoing, but he reveals he knows she helped Gwen escape. While he kept mum about Ava helping bust Kristen out of custody, he’s not sure he can cloak her sins a second time. She quips he who snitches gets stitches. He dismisses her threats, demanding one good reason why he shouldn’t go to Rafe with what he knows. 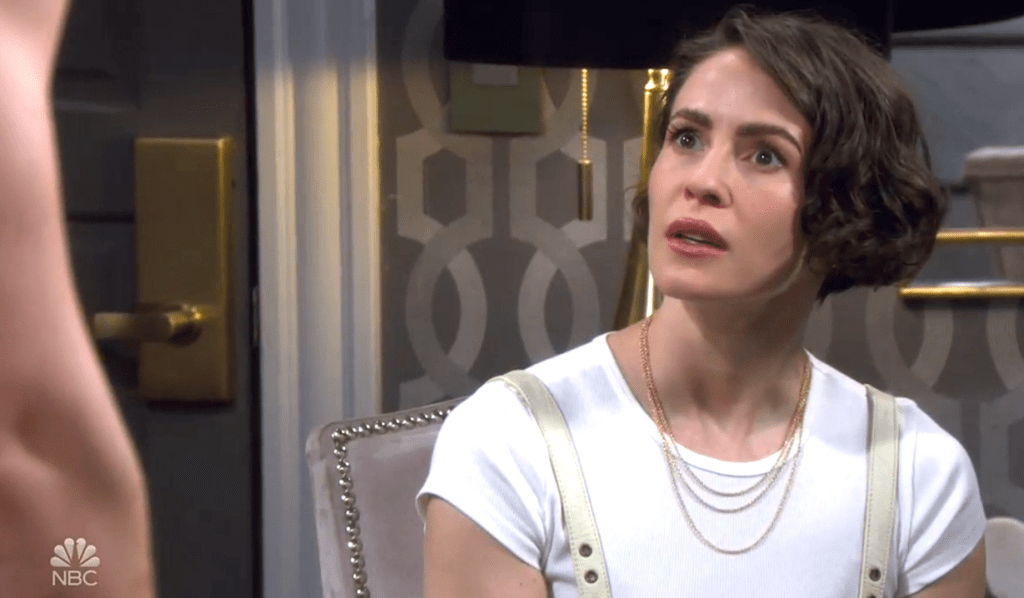 Xander bursts out of the bathroom in a towel to share with Sarah the brilliant plan he has to expose Gwen. As he rattles on, she interrupts to show him an article about Leo’s arrest. Xander is appalled to learn Leo betrayed a child’s belief in the fantastical Tooth Fairy, all the while lying in wait to kill said child’s mother. However, he doesn’t think that eliminates Gwen and Ava as suspects. He wants to break into Gwen’s room and plant a bug to prove they were in cahoots with Leo. He turns to grab his fake mustache first, but Sarah counters they go to the cops with what they know. He reluctantly says that could work too.

More: How to watch Days when it moves to Peacock Sloan returns to Leo in the interrogation room, confirming the evidence was where he said it was. Now, it’s just a matter of time.

Sarah and Xander run into Gwen outside the Salem Inn. Sarah accuses her of wearing a mask of her face the night of Abigail’s murder. Rafe arrives and shakes a paper bag. “You mean this mask?” He orders Gwen to come with him to answer some questions.

Next on Days of Our Lives: Gabi gets two surprise visits, and Rolf confronts Li.

Catch up on where Stephanie left off in Beyond Salem with our photo gallery below. 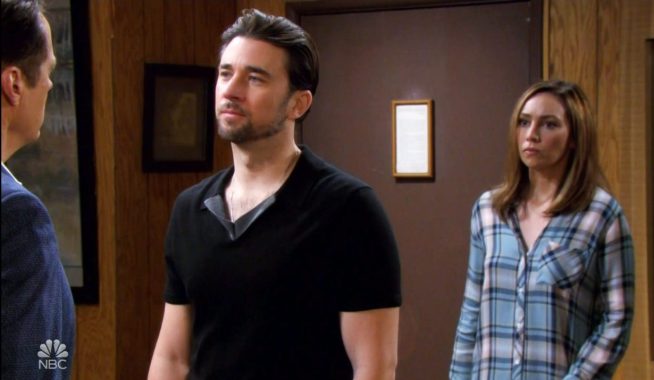 As the Walls Close In On Leo, He Offers Up the *Real* Murderer — Plus, [Spoiler] Returns to Town!

Kristen Threatens to Stab Chloe Through the Heart, Before Reuniting With Rachel — and Gabi Is Shocked to Find Li With Rolf 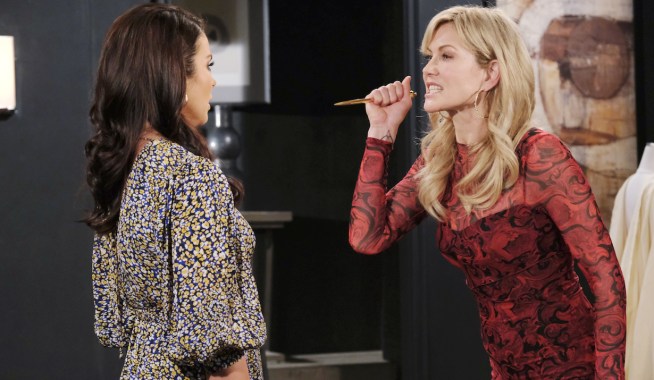