Anna Grows Suspicious of Kristen, Who Gets a Surprise In Rolf’s Lab — and Li Makes an Emotional Request of Gabi

Monday, August 15, 2022: Today on Days of Our Lives, Anna expresses her doubts to Tony, Gabi considers the future, EJ hosts an awkward family dinner, and someone catches Alex's eye. 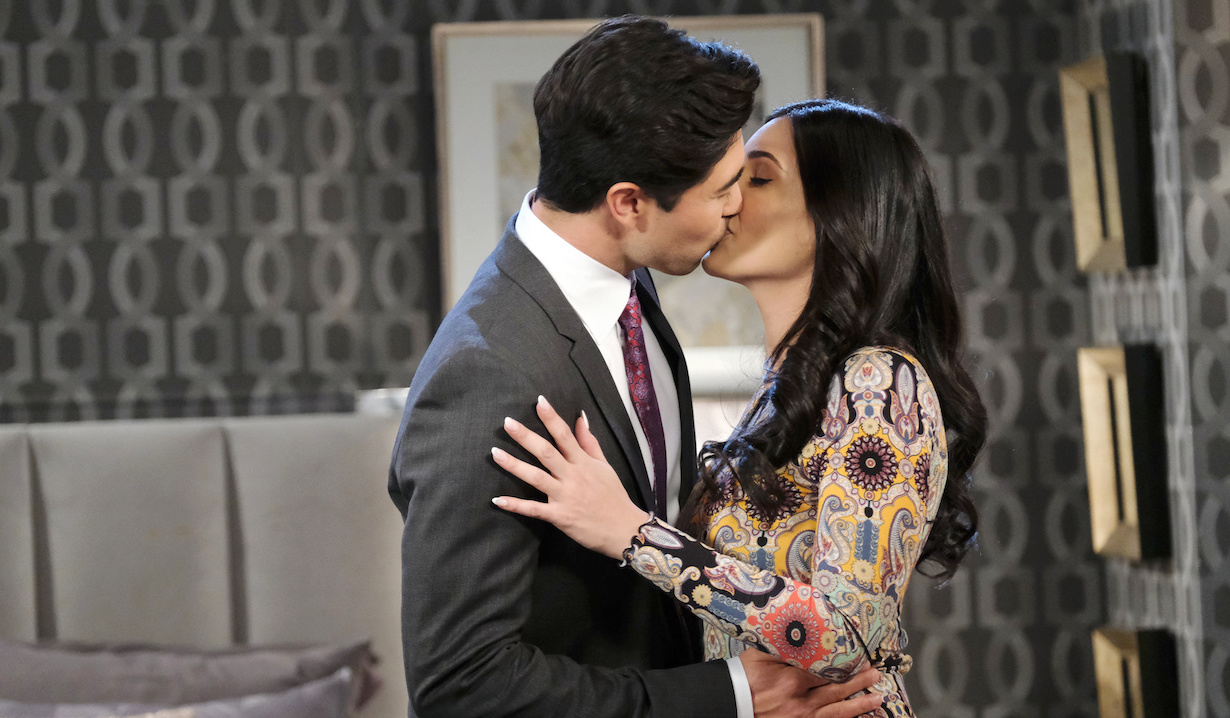 At the Kiriakis mansion, a shirtless Alex asks Maggie’s advice on which shirt he should wear for his dinner date. She asks who the lucky girl is. He responds it’s actually two lucky girls. While he wouldn’t mind it, he assures a flustered Maggie she won’t be finding the girls in his bed because they only have eyes for each other. When he again asks which shirt he should wear for his date with the bisexual girls, Maggie suggests he worry less about his wardrobe and more about respecting them enough not to label them. He says she’s right and Maggie picks his shirt.

More: How to watch Days when it moves to Peacock 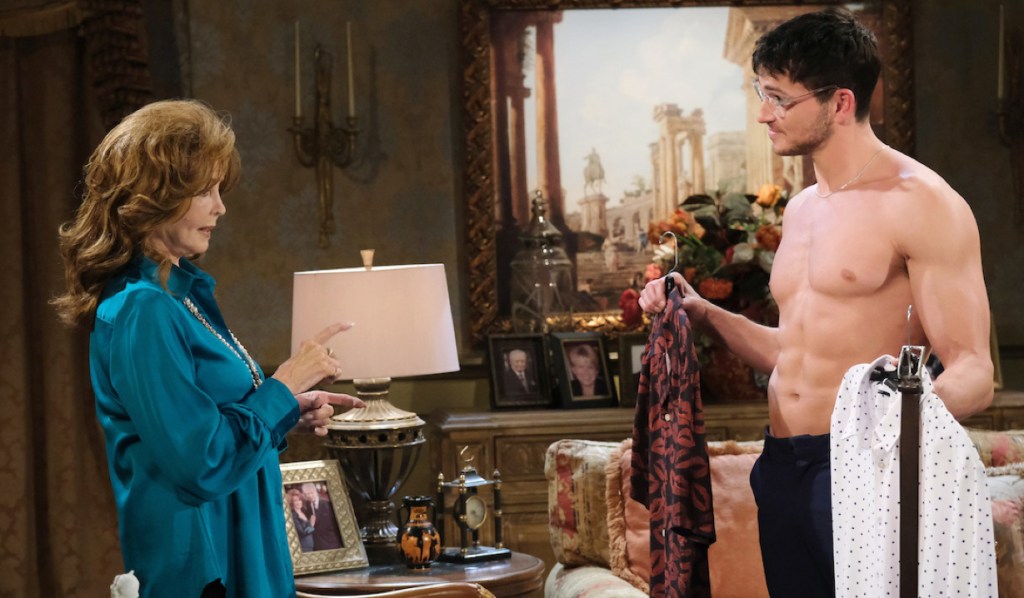 Chanel comes to Allie’s apartment in a form-fitting orange dress for their date with Alex. She tells her to hurry and change, but Allie, in a white t-shirt, says she’s ready. It’s what she always wears. Chanel knows, but reminds Allie they’re going out with Alexander Kiriakis. She suggests she put on something fun and sexy. Allie wonders if she’s lusting after Alex and that’s why she wants to impress him. Chanel assures her she’s not dragging her on a date with a guy she’s attracted to. She’s dressed up for her and really wants to make this a date night. They can peel off from Alex whenever they feel like it. Allie says she’ll meet her at the bar and goes to change. 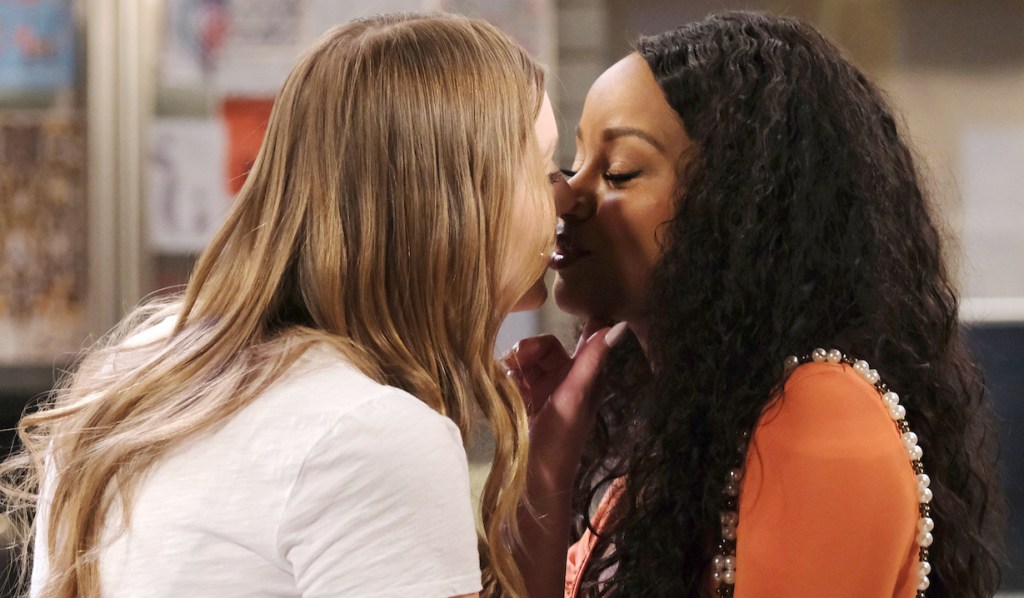 Chanel meets Alex at the Bistro. He’s impressed by how well she cleans up and wonders if he gets her all to himself. Allie shows up in a tight lavender dress declaring Chanel is already spoken for. Over drinks, Allie and Chanel recount their history for Alex. When they bring up their first kiss, he suggests they show him what it was like. Offended, they threaten to leave, but Alex apologizes and asks to hear more of their story. After they finish, they make out, which turns Alex on.

In his Salem Inn room, Li checks in with Rolf on the phone when Gabi enters. Li hangs up and Gabi laments having to give Ava a job. She proposes she could just string her along until she gets her DiMera shares. Li has no doubt she will outsmart Ava, who is no match for her. They kiss.

More: What to watch on Peacock

Later in bed, Gabi tells Li that being with him gets better and better. He feels the same, but asks if she’s truly open to them being about more than just sex. “I am. Sure,” she replies. He suggests she take off Stefan’s ring around her neck then. Gabi tenses. She wouldn’t even take it off for Jake, who probably felt he was just a stand-in for his brother. Li asks if he was. Gabi told Jake he wasn’t, but he never had her heart the way Stefan did.

However, Stefan’s gone now and not a threat to them. She doesn’t know if she’ll be able to love someone the same way again, but she hopes so. When she’s ready to, she’ll take the ring off. She asks if it’s okay that she still wears the ring. Li says of course. He reiterates that Stefan’s no threat to them… since he’s dead. Gabi wants to go out for food, but Li says he has to call his father with a DiMera update. After she gets out of bed to go alone, Li’s features darken. 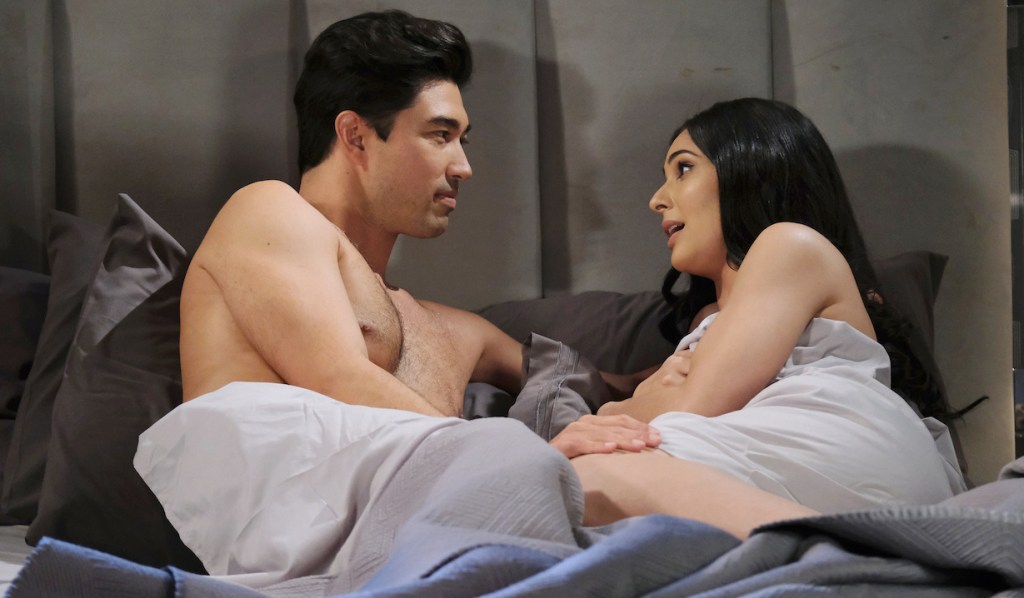 More: Catch up on all soaps’ news, mini recaps

At the Bistro, Chanel and Allie come up for air, but Alex encourages them to keep going. They think he should find a woman of his own to kiss and ask what his type is. He says he likes beautiful women, like everyone else. “Like her,” he says, gawking at an arriving Gabi.

At the DiMera mansion, EJ sets up a dinner for Ava and Gwen, but Ava says Gwen won’t be joining them. Johnny arrives and takes her spot. EJ tells his son that Ava is moving in. Johnny mutters a snide remark about EJ wanting her shares, before telling his father he and Ava have already seen quite a lot of each other. Ava smirks, and EJ wonders what all the looks are about. Johnny and Ava recount seeing each other naked.

EJ brings up Chanel and goes on and on about Johnny winning her back from Allie. Ava tells him to give it a rest. After more discussion, EJ makes a toast to Jake. He wishes he better knew the man Ava fell in love with so quickly. As EJ makes more passive-aggressive digs, Johnny orders his dad to stop. The men snipe at each other until Ava tells Johnny she knows his father didn’t mean any harm.

When EJ leaves to check on their next course, Johnny apologizes for his father going on about Jake. She thanks him for having his back. He, in turn, thanks her for having his with Allie before. She says they’re under the same roof now, so they take care of each other. Johnny adds, especially since they’re all DiMeras. Johnny steps out of the room to take a call and EJ returns. He apologizes to Ava and hopes she believes he didn’t mean to cause any more pain. “Of course I do,” she says, narrowing her eyes.

Tony and Anna stop by the garage apartment to visit Kristen, who looks at Stefan’s obituary on her tablet. There’s immediate tension with Anna, who rattles off the list of Kristen’s recent misdeeds. Kristen asks why they’re there. As they sit at the table, Anna detects motor oil and brings a tissue to her nose. Tony says he’s there to convince  Kristen to come back home. Kristen would prefer that, but EJ won’t allow it until she gives him her shares.
More: Scandalous triangle could tear apart the DiMeras forever

Tony understands, but assumes she can’t be happy living there. Kristen assures him she’s quite comfortable. In fact, it makes her feel closer to her brother. Anna picks up Kristen’s tablet assuming she was reading Jake’s obituary, but realizes it is Stefan’s. Kristen explains Jake’s death brought up memories of Stefan. Tony recalls Gabi begging Rolf to bring Stefan back, but there are circumstances even he can’t circumvent. Before they leave, Tony assures Kristen he’ll do his best to convince EJ to let her back into the mansion.

Outside the mansion, Anna expresses her doubts to Tony about Kristen. She knows she’s up to something. Meanwhile, Kristen enters Rolf’s lab to find a menacing-looking Li.

Next on Days of Our Lives: Li bargains with Kristen, and Paulina advises Roman.

Relive some of the most scandalous reveal in soap opera history in the photo gallery below. 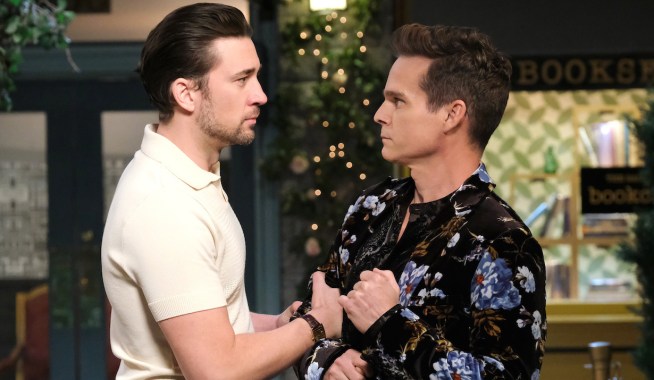 After Kristen Finds Him With Stefan, Li Presents a Mutually Beneficial Plan — Plus, Lucas's Actions Prompt Kate To Do the 'Right Thing' 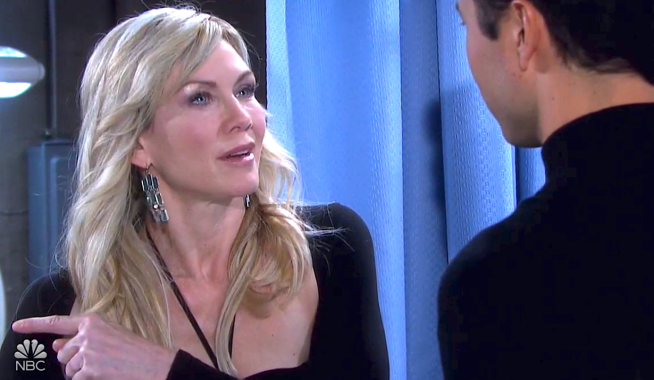