Abe and Paulina Get Engaged (Again) and Select the Perfect Wedding Date — Plus, Sarah Attacks Nicole

Monday, June 20, 2022: Today on Days of Our Lives, Sarah hallucinates, Lani is haunted, Abe and Paulina plan for the future, and Ava accuses Gwen. 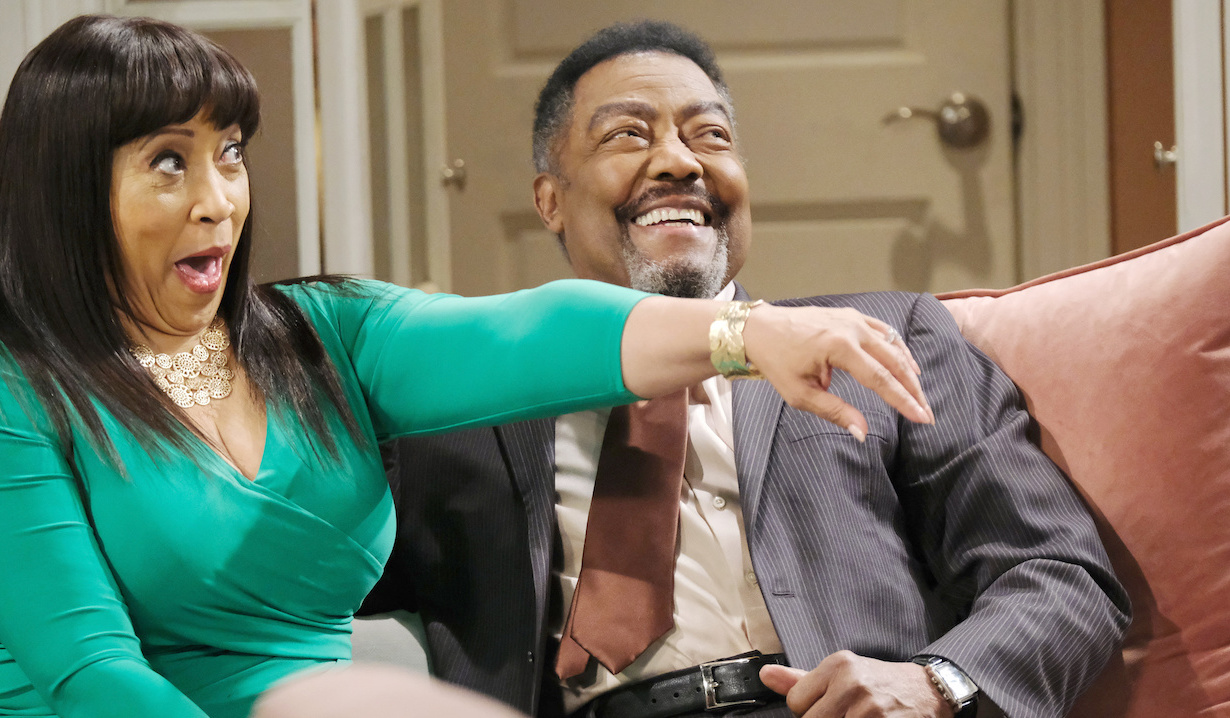 At the station, Lani talks to Julie on the phone about Abigail. She vows to bring her murderer to justice. After hanging up, she sees a bloody Ray in front of her. He asks, “What about Justice for the person who murdered your father?” Lani reels and yells for him to leave her alone. Eli runs over. Lani frantically tells him about seeing Ray, and panics over Abe finding out Paulina took the fall for killing him.

At home, Chanel leaves a voicemail demanding Justin get her mother out of jail. As she rants, the door opens to a grinning Paulina. Chanel runs to her mother who is out on bail. Paulina asks her daughter about her love triangle “with a couple of crazy twins.” Chanel expresses her confusion, but wants to focus on her mother. In fact, she’s going to cook all her favorite foods for a welcome home celebration. 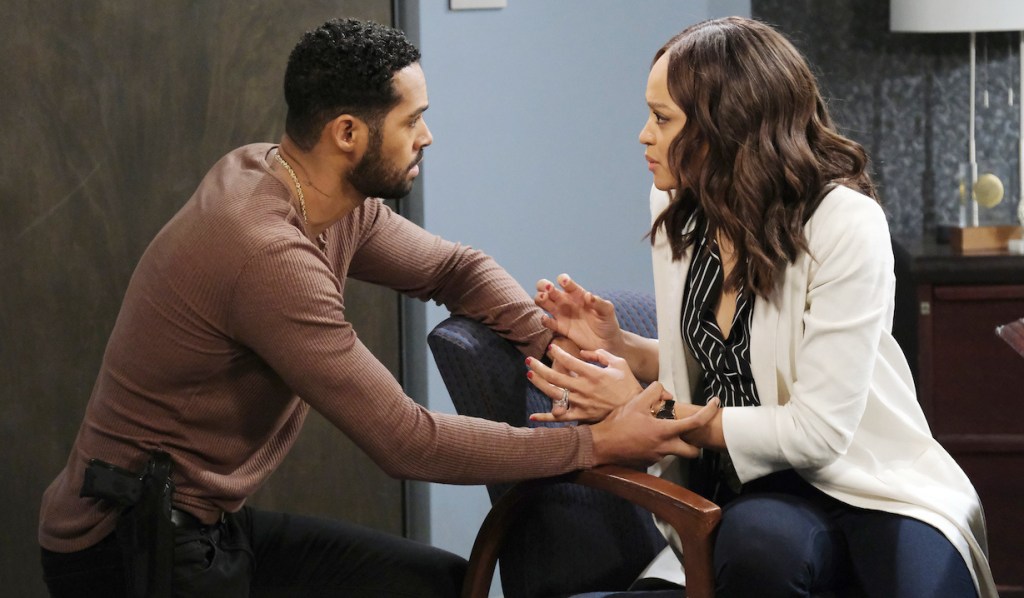 At the Horton House, Abe gives Julie his condolences over Abigail. He then tells her Paulina made bail. She thinks it’s wonderful he was there for her and hopes it means what she thinks it means. He relays he took her advice and told Paulina how he feels about her. Abe gets a call from Chanel who invites him to Paulina’s dinner.

Eli brings Lani into the interrogation room to reassure his wife she’s doing the right thing for their family. Plus, he doesn’t think Paulina will do any jail time. Lani thinks the only way to guarantee that is for her to confess. He reminds her of all the reasons why that’s a bad idea. He gets a call from Chanel, who invites them to Paulina’s dinner. Eli says Lani’s not feeling well and needs a quiet night at home with the kids. Lani fumes, declaring they’re going. Eli doesn’t think she’s up for it, but Lani spits he’s just worried she’ll have a breakdown and tell everyone the truth. Of course, he’s worried. He again reminds her that keeping quiet is best for the kids. Lani agrees and asks for a minute alone before they go home.

After he leaves, a teary Lani collects herself and then has another vision of Ray. He says the truth needs to come out. The only question is, when? 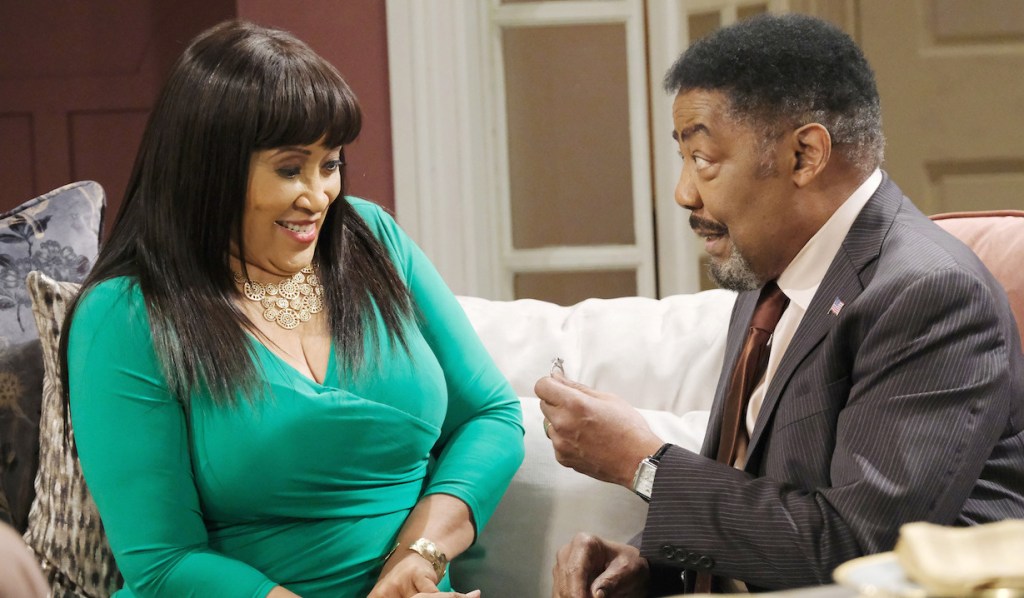 When Abe arrives at Paulina’s, Chanel leaves the two alone. Abe pulls out a ring box and asks her to marry him — for sure this time. “Hell to the yes,” she responds. When Chanel returns, Paulina shows her the ring and they decide Juneteenth is the perfect day to get married, which is tomorrow. Chanel joins them on the couch in a group hug. 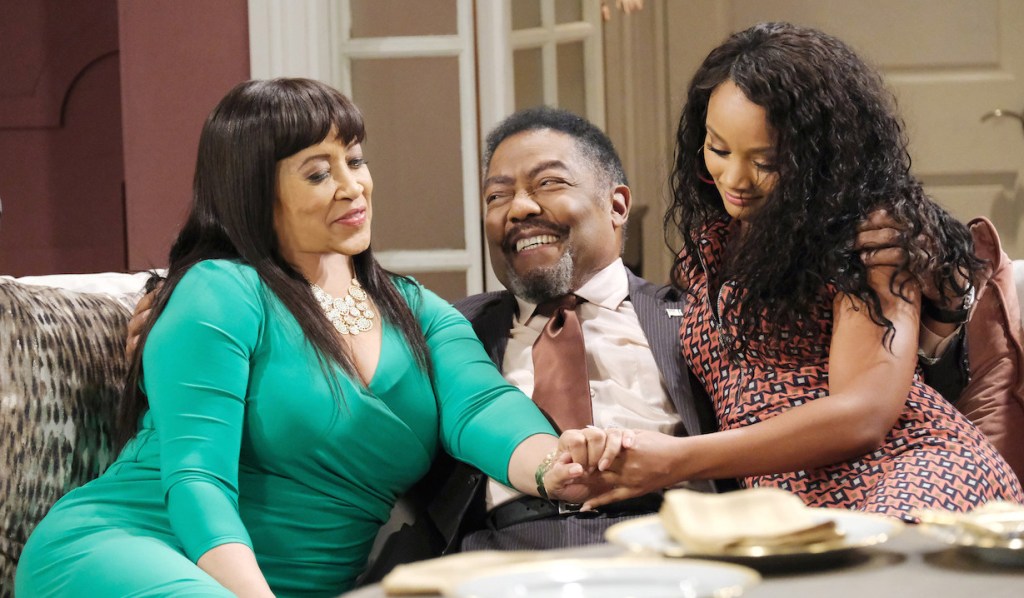 Xander returns to his Salem Inn room with Sarah’s prescription. He’s worried about her hallucinations and urges her not to keep things like that from him anymore. She promises and then tells him she went to see Gwen in prison. It was very satisfying to see her behind bars where she can’t hurt anyone ever again. She also enjoyed telling her they are back together. Xander is grateful for that and notes they have a lot of lost time to make up for. Sarah retorts he’s missed no time since he had a fiancée and a wife. His mouth drops. “You can’t really be jealous of Chanel Dupree,” he exclaims, while explaining the circumstances. They get flirty and then Sarah suggests they grab food so she can take her medicine to stave off the hallucinations.

More: Catch up with our mini recaps of last week in Daytime 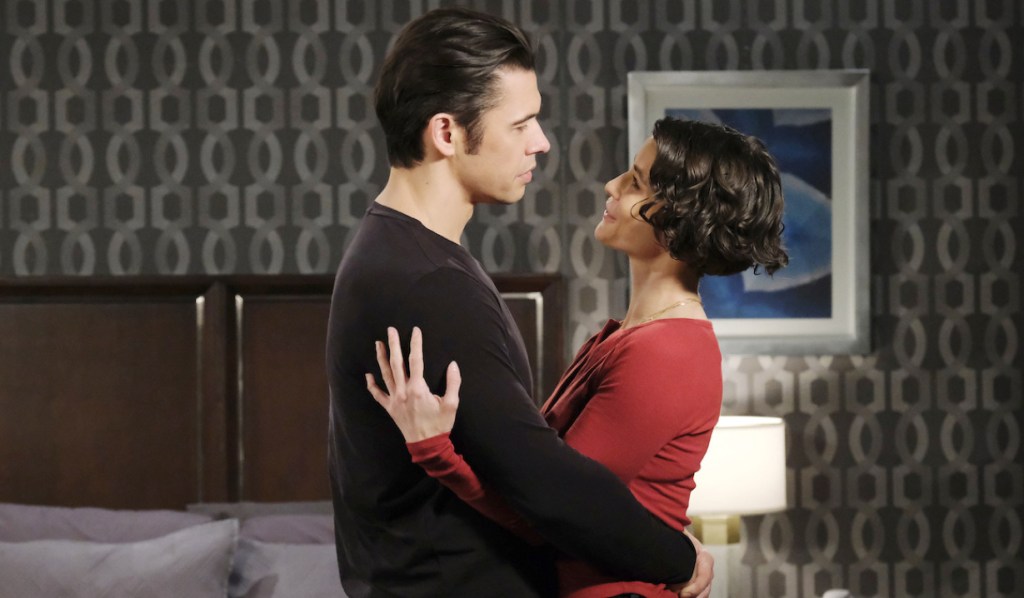 In the Square, Eric overhears Nicole talking to Rafe about calling off the wedding. After she hangs up, she explains they’re just postponing because of Abigail’s death. She grows emotional over Thomas and Charlotte growing up without a mother. Eric embraces her. 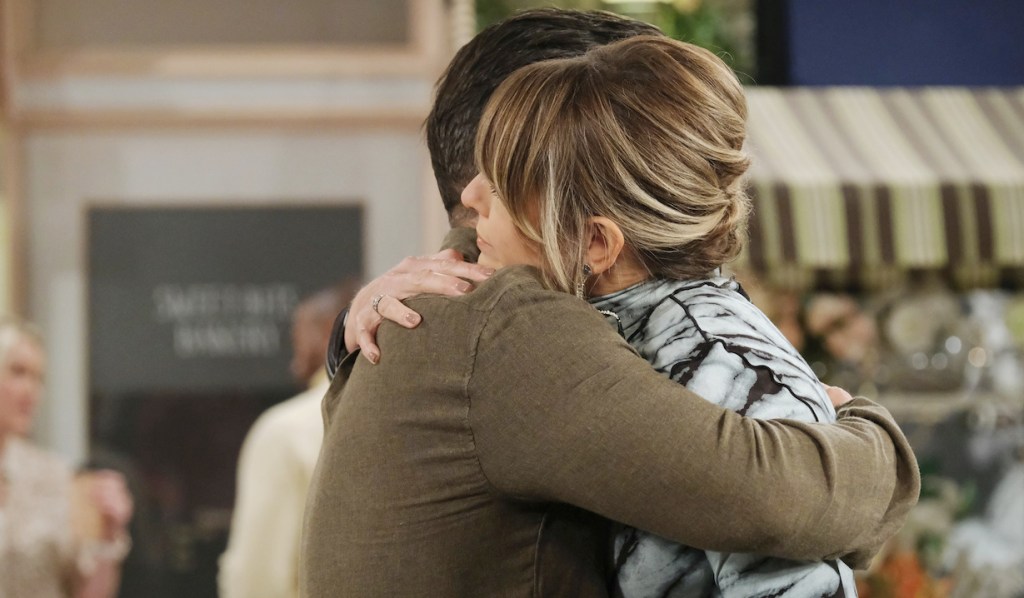 Sarah stomps up and pulls Nicole’s arm. “Get off of him you conniving bitch,” she shouts. Xander pulls her off Nicole, as Sarah yells that she won’t let her ruin Eric’s life again. He calms Sarah down assuring her it’s Nicole, not Kristen. Sarah apologizes after Xander explains her hallucinations to a gaping Nicole and Eric. Xander assures Sarah it’s not her fault. She knows. It’s Gwen’s. Xander suggests that it’s Abigail’s fault as well. Eric and Nicole realize they don’t know about her murder and update them. Sarah grabs her head and cries. They express their anguish over it and leave to get Sarah something to eat.

More: How Tad became more than a cad on AMC 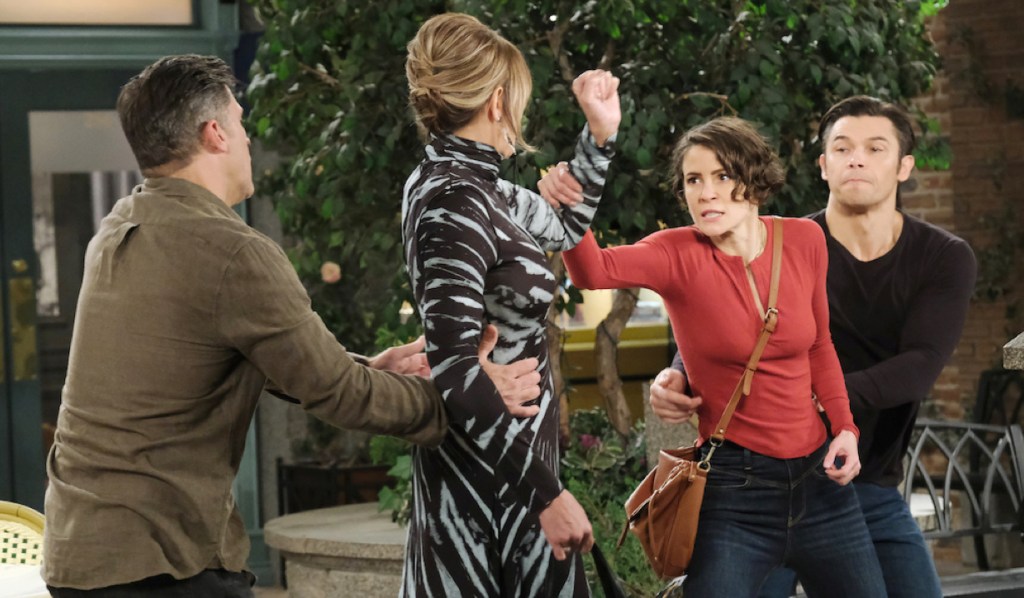 Before Eric leaves to check on the Deverauxes he tells Nicole he hopes to get an invite when she and Rafe decide on a wedding date. There’s nothing more he wants then to see her happy. She wistfully watches him walk away.

In the prison visitors’ room, Ava asks Gwen if she killed Abigail. Gwen reminds her she was locked up when it happened, but Ava recounts how Gwen called her to bust her out of prison for just a few hours. And, “like a fool,” Ava agreed. She thought Gwen just wanted a respite, but now it’s obvious she was planning to commit murder — and now she’s an accessory. Gwen tells Ava she is getting worked up over nothing. Ava warns Gwen not to call her for any more favors and leaves.

Next on Days of Our Lives: Abe and Paulina’s wedding day begins, and Johnny offers to help Chanel.

Relive all the drama Eli and Lani have endured on Days of Our Lives.

<p>Upon learning her biological father shot Eli, Lani shot TR dead. However, Paulina took the rap, which Eli fully supported. The lie may have kept Lani out of jail, but it left her drowning in guilt.</p> 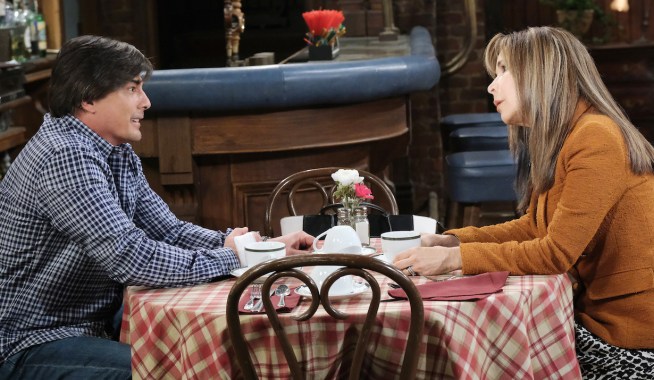 Kate Asks Lucas If He Killed Abigail, While Chad Gets Backup In His Quest For Vengeance

Abe and Paulina Invite Some Surprise Guests to Their Juneteenth Wedding, Only for [Spoiler] to Bring the Day to a Screeching Halt 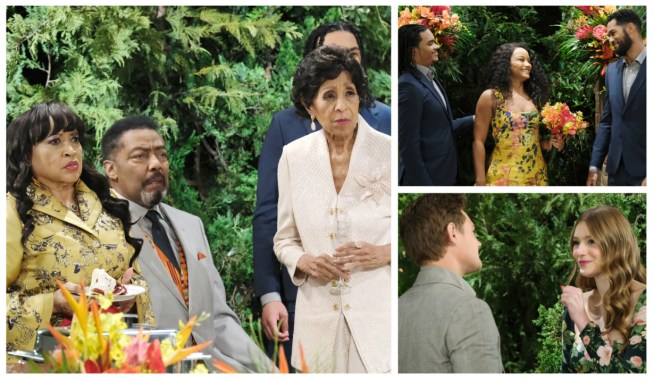