Duke Resurfaces to Help Rafe With a Surprise for Nicole, While Leo Blindsides Sonny With His Own ‘Gift’

Tuesday, May 24, 2022: Today on Days of Our Lives, Leo makes an unwelcome gesture, EJ confides in Belle, Xander appeals to Sarah, and Rafe shocks Nicole. 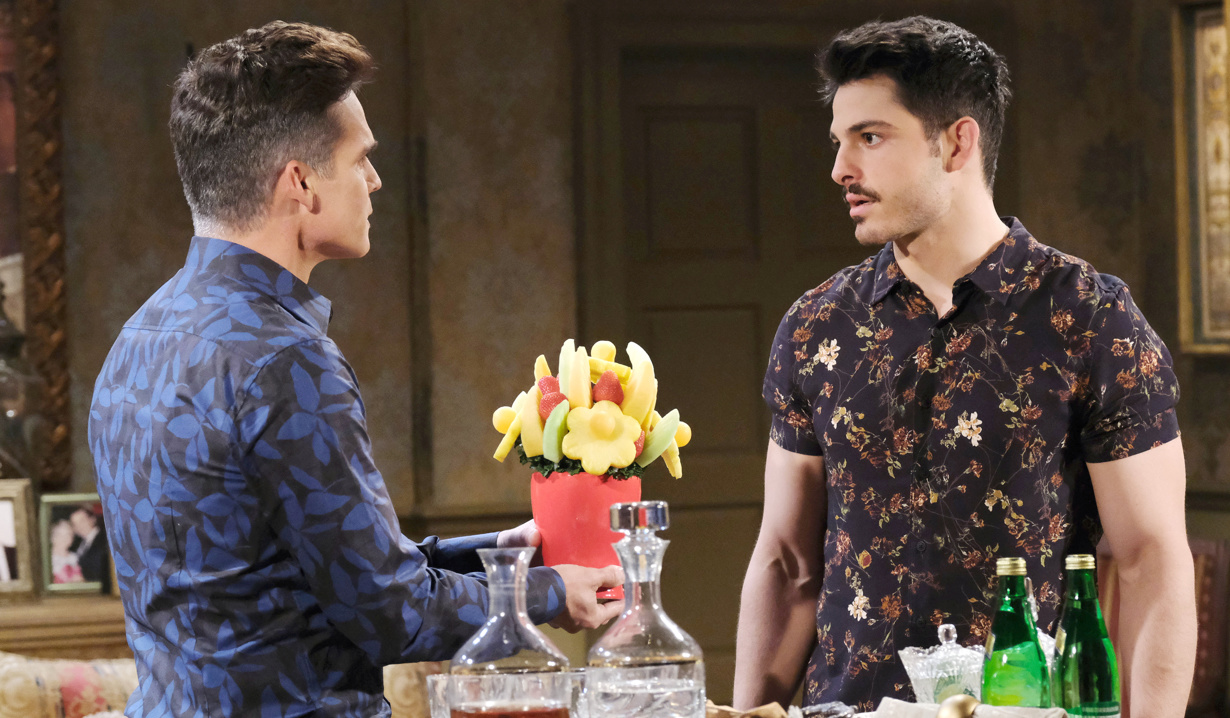 At the DiMera mansion, Belle agrees to a refill of her drink. In fact, she asks EJ for a double. EJ looks for a specific scotch, but discovers the bottle’s empty. He assumes it was Clyde who drained it. Belle wonders why Clyde was even in his house. EJ fills her in on Clyde’s business proposition and lets slip he has dirt on him. Belle absolutely wants to hear about it, but EJ worries it could be dangerous for her. Belle isn’t worried and urges him to confide in her as his attorney. 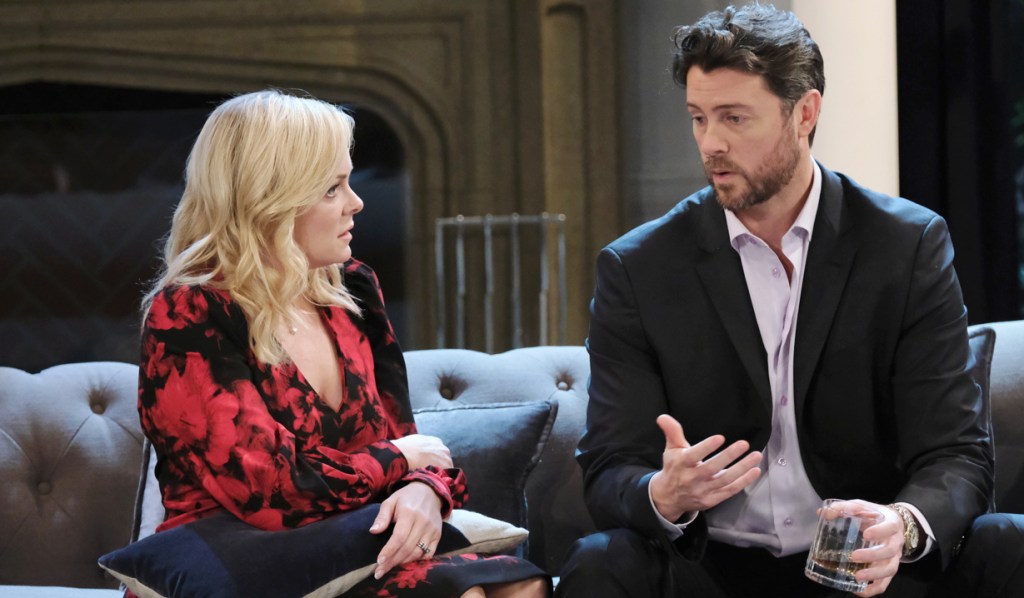 EJ confesses that Clyde is responsible for his “death.” Belle wants him to go to the police, but EJ further confesses he was running drugs when the shooting happened. Belle thinks she can strike a deal for him, but EJ is more worried about Clyde striking out at his family. He has a plan that will guarantee Clyde never hurts him or anyone he loves ever again. Belle cares about him and urges him not to take the law into his own hands. He picks up on her saying she cares about him. She clarifies that she cares about him as her brother-in-law. She suggests they get something to eat while they brainstorm legal avenues for Clyde. She wobbles as she stands. EJ steadies her and suggests they use his driver.

At Ben and Ciara’s, Clyde isn’t thrilled to learn the baby is named after his other grandfather, but takes solace in the fact that he’s the only living grandfather the baby has. Ben hands the baby over to Clyde, who thinks Baby Bo looks like him. As Clyde talks about his date with Nancy, Ben tells his father how proud he is that he turned his life around. 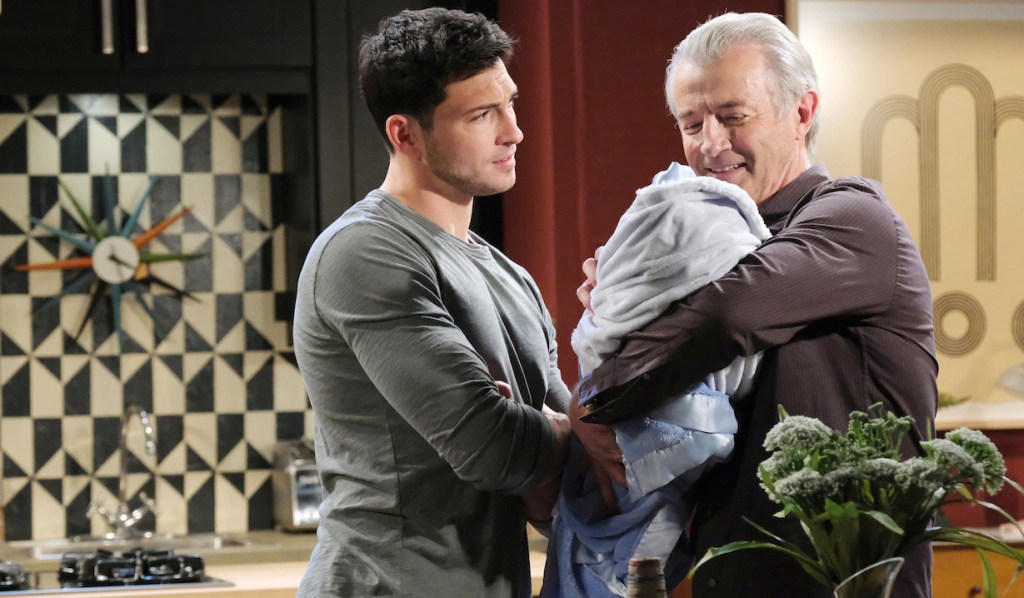 Eric checks on Sarah in his room over the Pub. She’s in tears over her baby, despite it happening years ago. Eric knows it’s new to her and suggests they go downstairs to eat. He leaves to wait for her, as she gets a call. She looks at her phone and dismisses the call from Xander.

Sonny finds a distraught Xander in the Kiriakis living room. He pours himself a drink as Xander fills him in on his situation with Sarah. Sonny suggests Xander give her time. Maybe she’ll find a way to forgive him again. Xander wants to run over to her, but Sonny thinks that’s a terrible idea. Xander won’t take relationship advice from someone whose husband lives in a different state. He suggests Sonny not let too much distance grow between him and  Will and leaves. 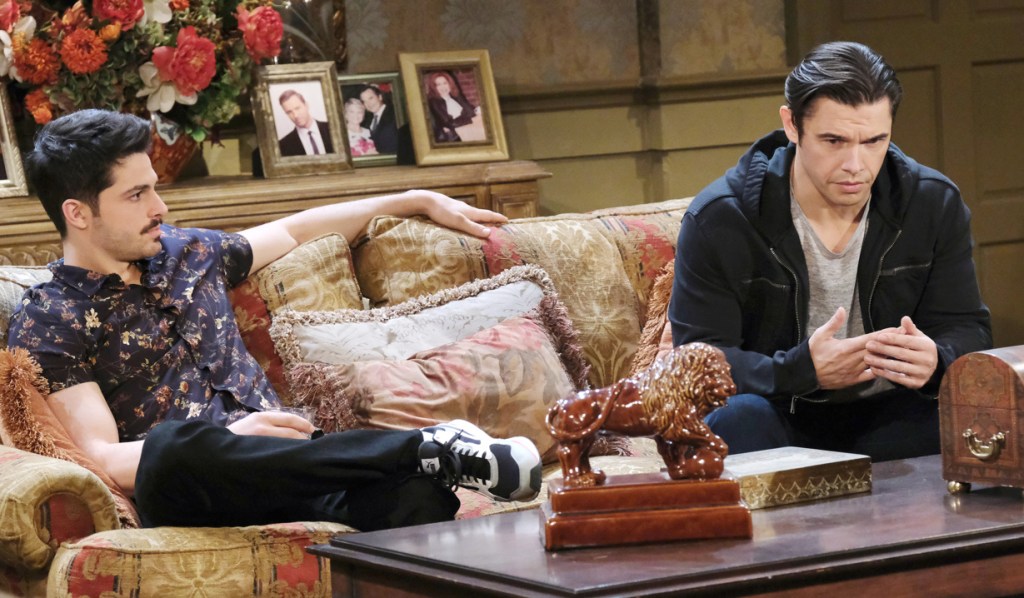 Nicole and Rafe bring Holly to the Pub. Eric sees them and hugs Holly, who misses him. She asks if he’s going to get back together with Mommy. Nicole tells her daughter Eric is a priest and she’s with Rafe. After Eric also explains he’s sticking around to help Sarah, Rafe takes Holly to the kitchen so he and Nicole can talk. Sarah joins them and apologizes to Nicole for her behavior regarding Mickey. Nicole completely understands and leaves with Rafe and Holly when they return. Eric wistfully watches them go.

In the Square, Nancy runs into Leo. As they trade barbs, Nancy declares Leo will spend the rest of his life alone and it’s exactly what he deserves. He lunges at her and pulls off her wig. Nancy chases him around until Rafe shows up and orders Leo to return Nancy’s property. Leo obliges and leaves. After Rafe moves on with Nicole and Holly, Leo returns to warn Nancy that Chloe is on his list.

More: Judi Evans recalls all too real Another World scene

After Nancy picks up Clyde, they head to the Square, where she fills him in on her run-in with Leo. Clyde assures Nancy he’ll protect his woman the next time they see him. He buys her flowers and then they bump into Belle and EJ. The foursome makes pleasantries before Clyde and Nancy head off. Belle and EJ wonder what that was about.

Xander returns to the mansion for his phone and brings in a package of cookies he found from Will and Arianna. Sonny gloats as Xander growls and leaves again. After Sonny leaves a message thanking his husband and daughter for the delicious cookies he just ate, Leo arrives with an edible arrangement. Sonny orders him out, but Leo claims he’s turning over a new leaf. He eats the fruit to prove it’s not poisoned. Sonny gets a message from Will that says, “What cookies? We didn’t send you anything.” A wobbly Sonny stands and says to a smirking Leo, “It was you.” He promptly passes out. 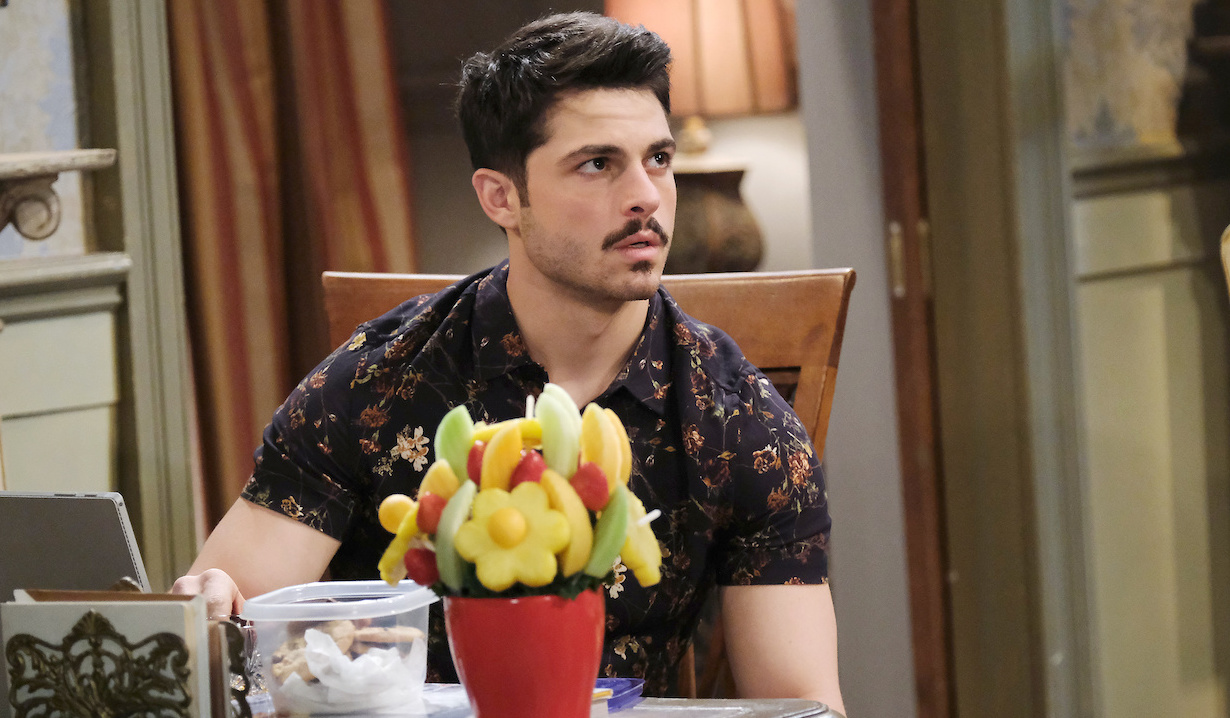 As Eric consoles Sarah in his room, Xander knocks on the door. Sarah wants to get this over with and allows Eric to let Xander in. Xander vows to change and learn as long as she forgives him. She did it before. Sarah declares she’s not the same woman anymore. He reminds her they were going to get married, but she doesn’t know what she was thinking. There’s no way she’d marry him now. He vows not to give up on her before agreeing to leave.

After Nicole puts Holly to bed, Rafe pulls out a present for Nicole, which is another Duke. He instructs her to check the bear’s pocket. She digs in and pulls out a diamond ring.

More: What will Nicole’s news mean for Eric? 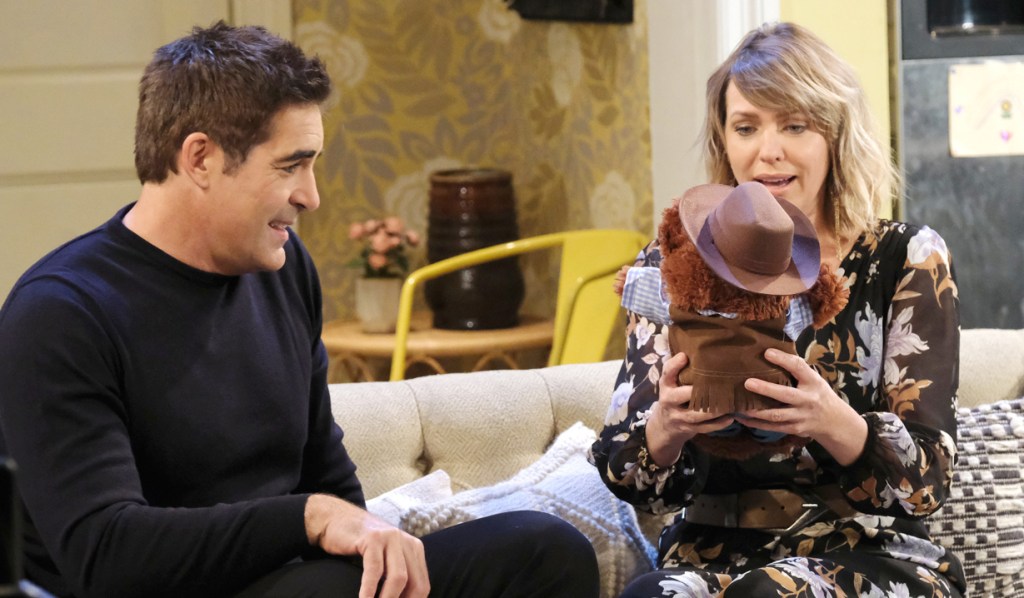 Next on Days of Our Lives: Gabi sees Li in a new light, and Eric shares big news.

Celebrate Brothers’ Day with our photo gallery of soap stars with their male siblings. 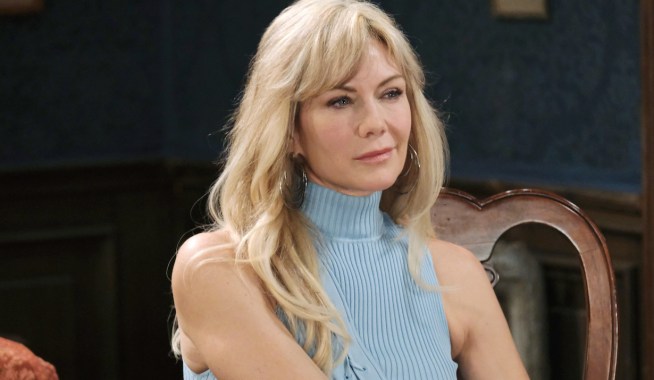 Kristen Reaches Out to [Spoiler] After Her Vote Changes Everything at DiMera — Plus, Belle and EJ 'Wallow In Mutual Misery'

Eric Receives Life Changing News, Just as Nicole Says Yes to Rafe — Plus, Jake and Gabi Distract Themselves With Other People 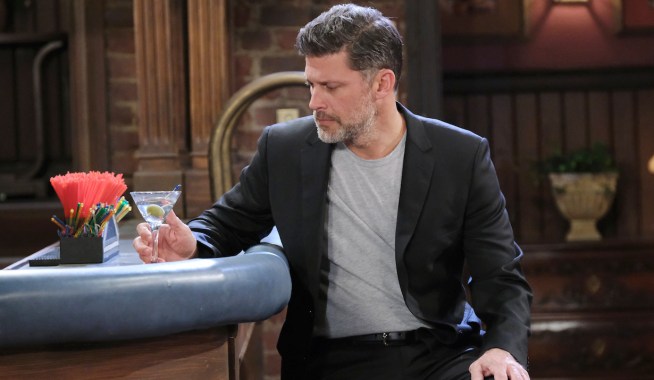