Kristen Reaches Out to [Spoiler] After Her Vote Changes Everything at DiMera — Plus, Belle and EJ ‘Wallow In Mutual Misery’

Monday, May 23, 2022: Today on Days of Our Lives, Kristen makes major moves against  — and with — her brothers, Tripp gets honest with Allie, Jan manipulates Shawn, and Gabi mixes business with pleasure. 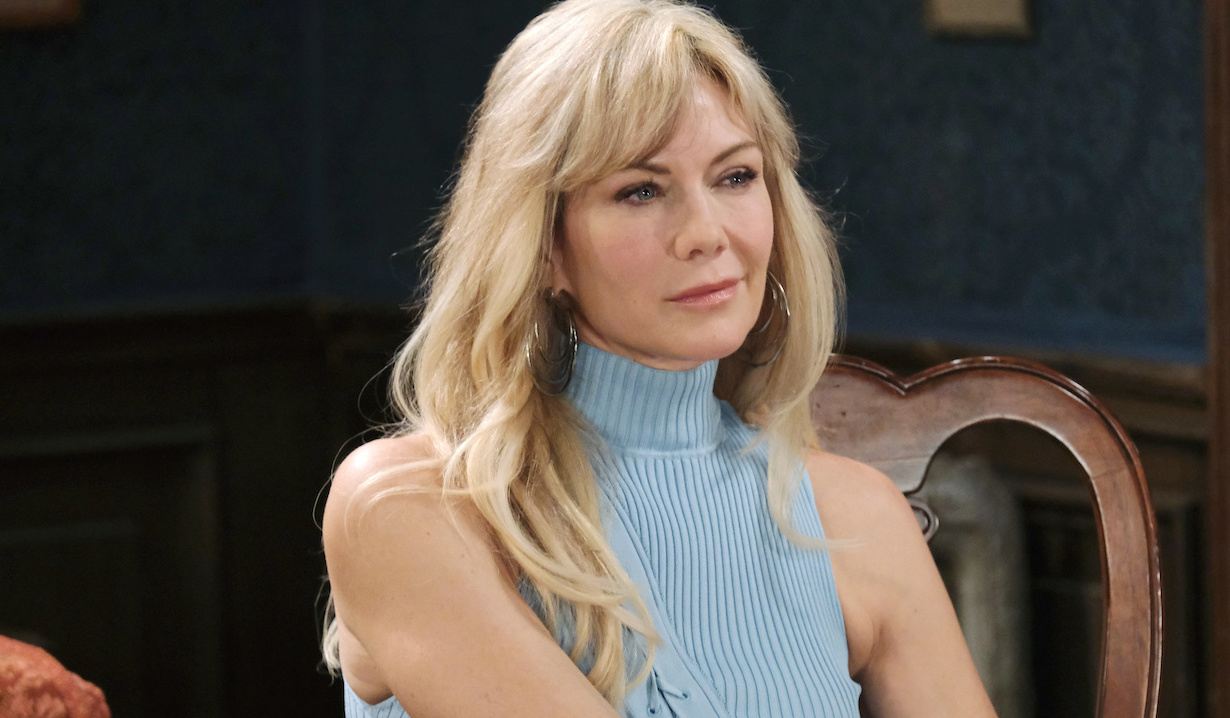 At DiMera, Kristen videos in to tell everyone they can’t have a vote without her. Assuming she’d vote with EJ and Chad, they inform her that Gabi already lost, so her vote won’t change anything. Kristen counters, “Not unless I vote against the motion,” which she does. “Gabi, Jake,” she says, “congratulations to the both of you.” EJ and Chad reel.

Li grins and explains that Stefano made sure criminality didn’t void a vote, so it’s valid. EJ asks why Kristen is doing this. Kristen cackles over it being fun, but also reminds EJ that he wouldn’t represent her or even visit her in jail. As for Chad, she’s protecting him from being a hypocrite for accepting her help. Also, she knows he would have had her arrested had she not taken off from that island.

More: Big changes ahead for Rafe and Nicole 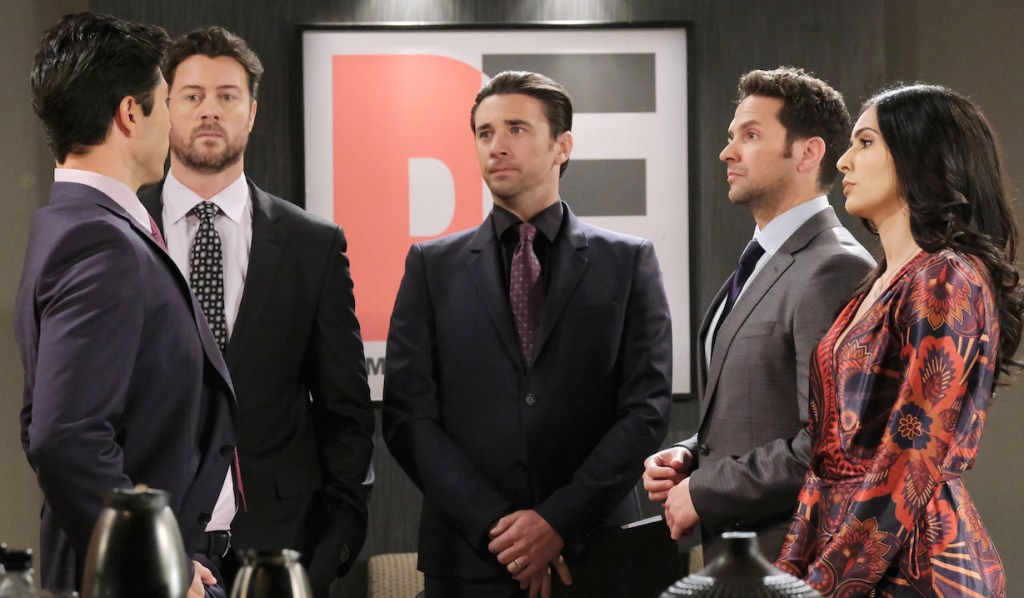 After the meeting breaks up, Gabi and Jake celebrate with a hug. They lock eyes as they pull away and then Gabi hugs Li. Gabi tells him they should celebrate with drinks, but dismisses Jake when he assumes he’s joining in. She tells him he should get to work and that they need to keep things professional. Li offers his arm to lead Gabi out. Jake glowers.

At the Bistro, Gabi and Li enjoy cosmos. He asks if he’s there to make Jake jealous. She assures him she and Jake are over. He says, “You’re saying your available, then?” She responds that she could be. He raises his glass and toasts, “To us.”

More: Judi Evans was ‘knocked out cold’ during scene 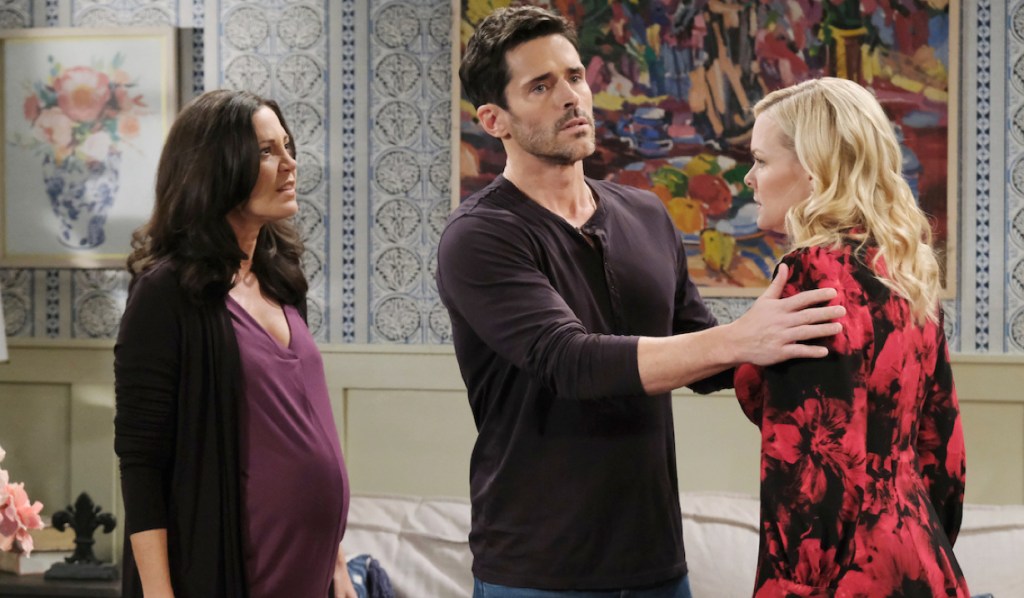 Shawn returns home to find Belle shouting at Jan. Belle tells her husband that Jan wants her to clear out her office for the baby. Shawn sides with Belle. Jan smirks and says the baby will have to take Claire’s room then and she’ll bunk with Shawn. As the women bicker, Jan expresses her belief that she’ll remain free once the baby is born. Belle shouts that she will make sure Jan lands right back in prison. When Belle gets in her face, Jan yelps in pain. “It’s the baby,” she says. “Something’s wrong.” Shawn helps her up as she asks to go to the hospital. 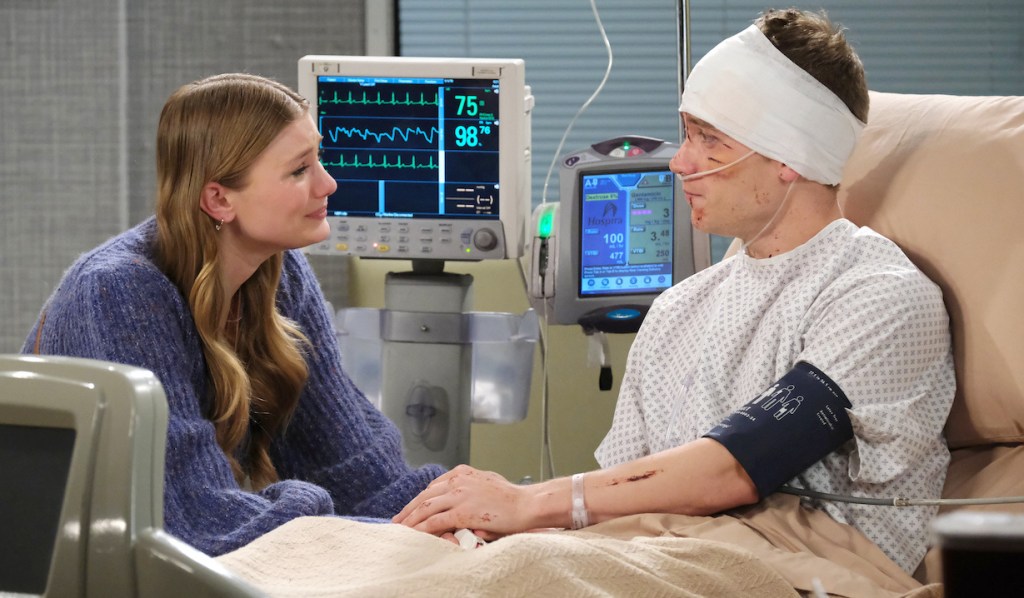 In Tripp’s hospital room, he tells Allie he knows she and Chanel still love each other. Allie tears up and admits it. Allie declares all she wanted was a dependable man for her son. She thought they could be a family. Tripp says, “A normal family?” She questions his use of the word normal. He brings up her confusion over coming out as bi and adds that being with Chanel is more complicated than being with him. Allie counters that she doesn’t have an issue with being bi. As for Chanel, she isn’t stable or dependable. He states that she’s unpredictable and exciting, “Like you.”

Tripp wants to be with someone who wants him with their whole heart. He says letting him go would be the nicest thing Allie could do for him. She cries as she asks if this is goodbye. Tripp assures her he will always be part of her and Henry’s life. Through tears, she thanks him for everything he’s done for her.

More: What worked, what didn’t last week on Days

In the lobby, Johnny tells Chanel he still loves her. They kiss and express how much they missed each other. He asks if she has any plans tonight. When she says no, he says, “Let’s get married.” Her eyes widen and she turns away. He gets that it’s sudden, but reminds her how in love they were before the devil intervened. He wants to be that way again, “Don’t you?” She admits she still loves him, but she also loves his sister. She’s not ready to make any major decisions right now. She’s not saying no to him. She just wants to wait and see.

Later, Johnny gets a message about the DiMera vote going up in flames. Johnny bemoans all the implosions in his life, but says if there’s any chance for them, Chanel is worth the wait. Chanel assures him there’s definitely a chance. Allie walks up crying and relays what just happened with Tripp. They’re really done. Chanel hugs her and leaves for the bakery. The siblings exchange an awkward look.

More: Watch an episode’s worth of unaired Chad/Abby scenes 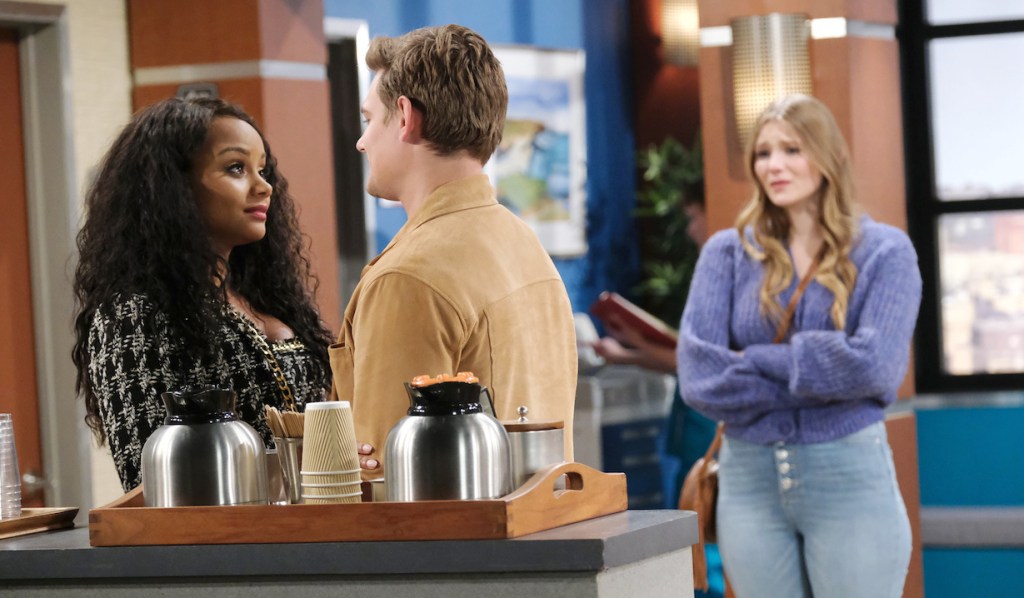 In a hospital room, Shawn reminds a teary Jan the doctor said cramping is normal at this point in the pregnancy. She still worries about losing the baby. Belle watches as Shawn comforts her. When they see her, Jan blames Belle for what happened and orders Shawn to get rid of her. Shawn asks to get coffee with Belle, but Belle says he needs to be with his baby and she needs to be anywhere else. Jan smirks as Belle leaves.

Shawn brings Jan home. She says as long as he keeps Belle away from her and their precious baby they’ll be fine. When Shawn leaves, Jan kicks back with a smirk.

More: Freddie Smith reveals what happened to his Days fortune 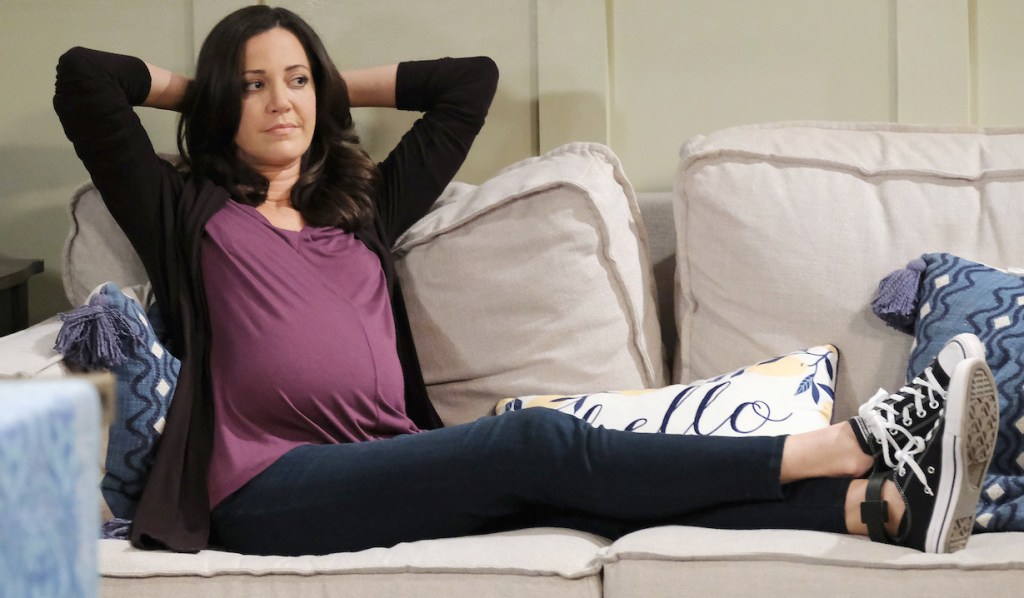 Belle comes to see EJ at the mansion and learns about the vote. She commiserates over her life blowing up as well. EJ pours her a strong drink. They sit to wallow in mutual misery.

Back at the office, Kristen video calls Jake. She points out that Gabi isn’t a DiMera, but the two of them are. “Oh, Jake, I have a feeling we’re going to do great things together,” she says. 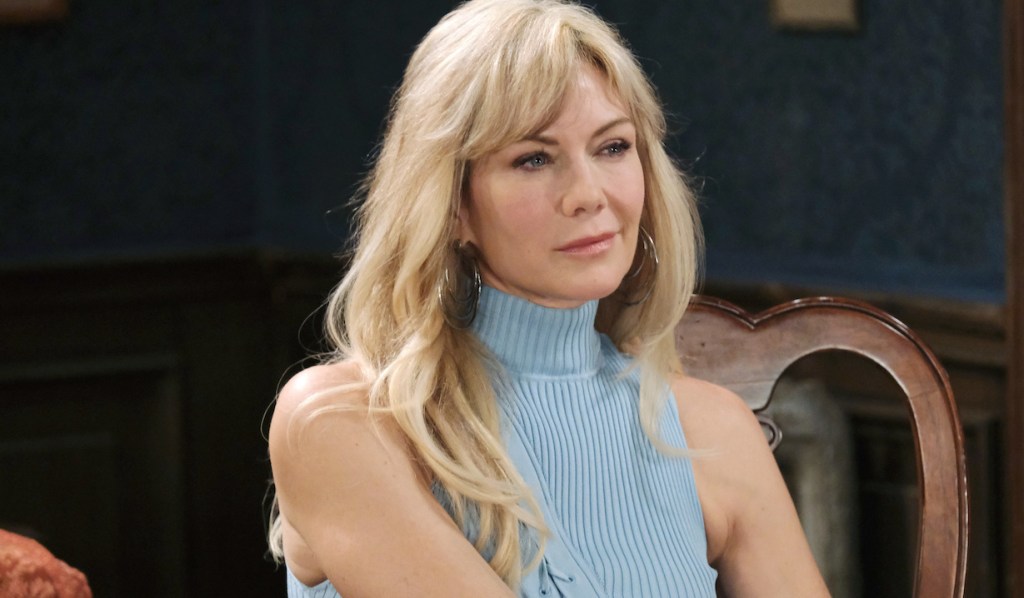 Next on Days of Our Lives: EJ shares a secret, and Nancy and Leo face off.

Need a refresher on some of those names mentioned at the shareholders’ meeting? Get reacquainted with the DiMera family tree in our photo gallery below. 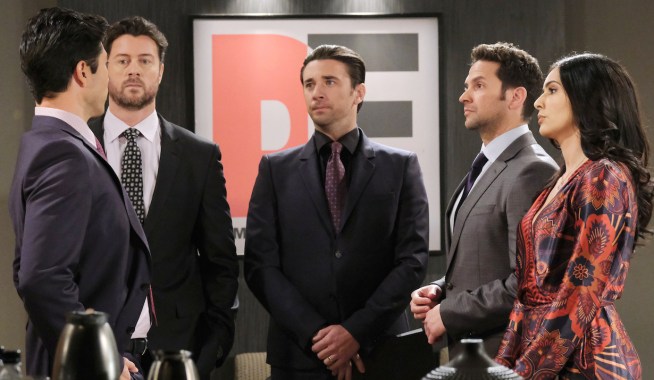 Gabi's DiMera Fate Is Sealed, Until [Spoiler] Makes a Surprise Appearance — Plus, Allie Confesses Her Feelings to Tripp, But There's a Catch

Duke Resurfaces to Help Rafe With a Surprise for Nicole, While Leo Blindsides Sonny With His Own 'Gift' 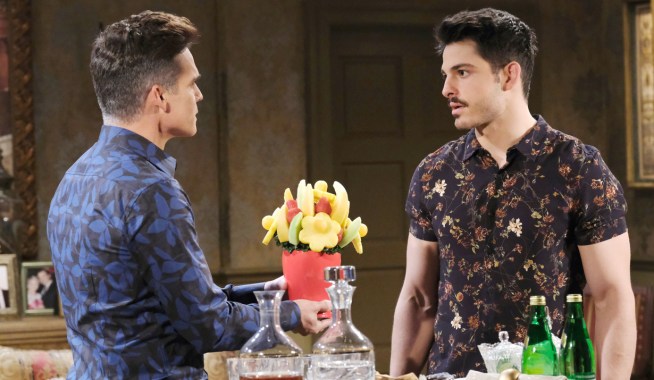