Thursday, May 5, 2022: Today on Days of Our Lives, Susan helps Ben reach Ciara, TR threatens Beth, and Lani's emotional appeal has an effect on Eli. 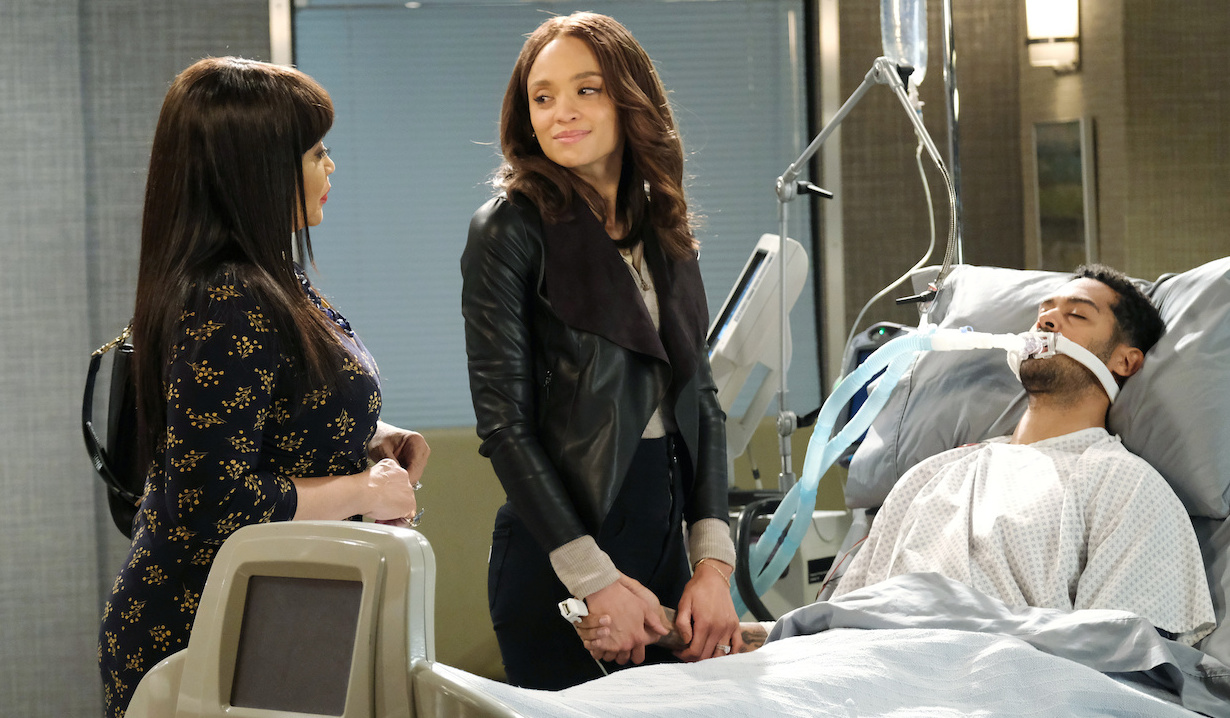 Tripp enters a hospital room to Beth, who reveals a black eye. She explains she tripped. He assures her anything she tells him will remain confidential and asks if someone did this to her. She just needs a pain killer. He writes her a prescription. She grabs it and rushes out. 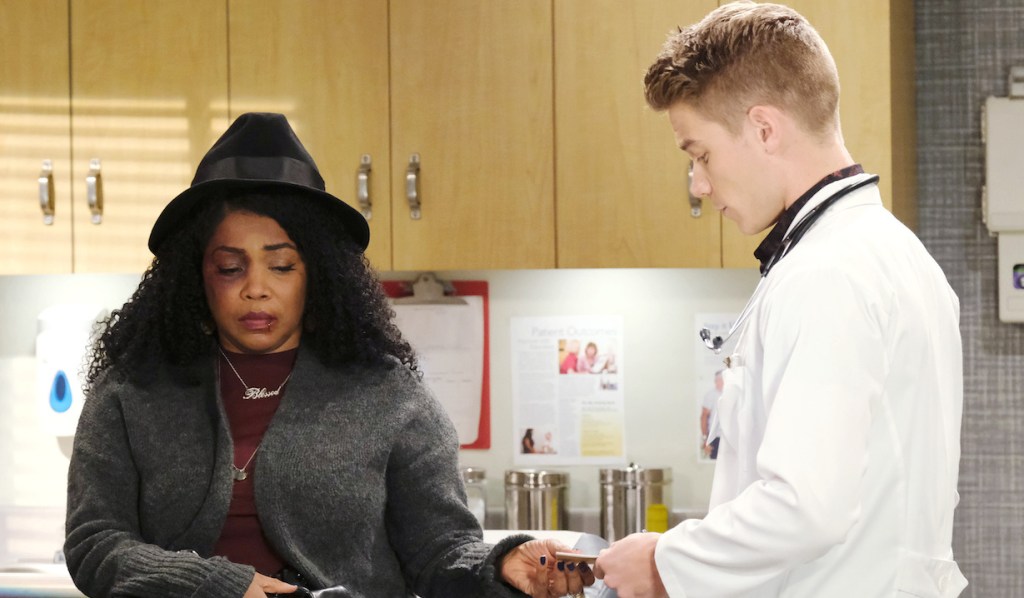 TR joins Lani and Paulina in Eli’s hospital room. He asks if there’s any change. Lani says no, but Paulina knows he’s working hard to get back to her and their beautiful children. TR scowls in the corner. Abe enters and side-eyes TR while noting there are too many people in the room. Paulina leaves to use the little girls’ room. 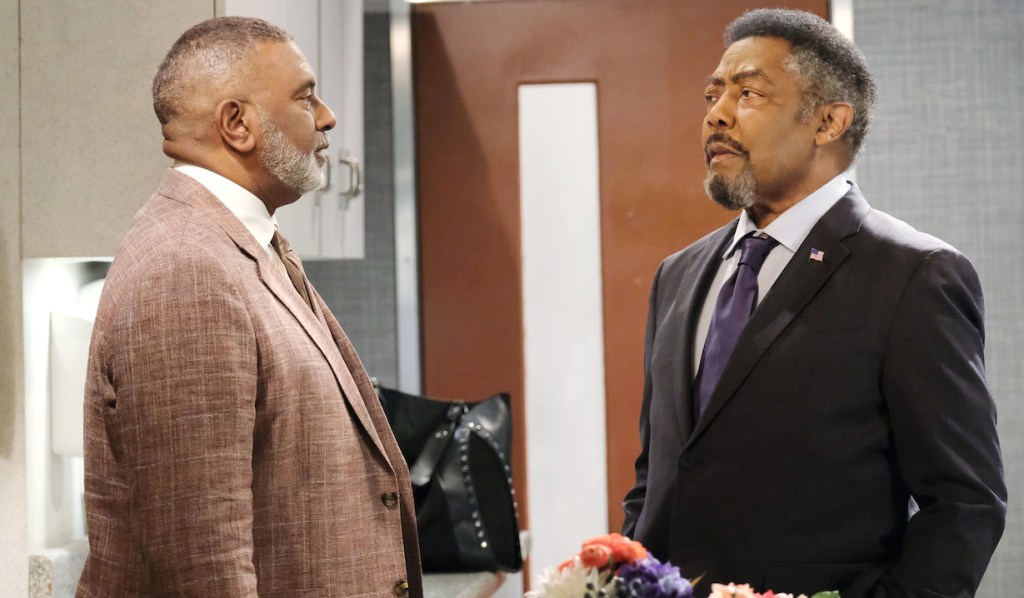 Abe and TR bicker until Lani yells at them to stop. They apologize and TR runs out when a west coast backer calls. Abe badmouths TR, but Lani points out he has been very supportive since Eli’s shooting. She promises to keep her guard up, but she doesn’t think he’s a threat anymore. Abe knows abusers rarely change. Lani thinks TR could be the exception. Abe wonders, what if he’s not? She recalls Beth needing to tell her something, but she never found out what it was. Abe suggests she get on that.

On another floor, Johnny tells Chanel he needs to find Allie. Chanel gently tells him it won’t be that easy because Allie took Ciara. She tears up over how scared she is. He hugs her as Paulina steps off the elevator. “What the hell is going on here?” she demands to know. Johnny rushes off leaving Chanel to tell her shocked mother the devil possessed both Johnny and Allie. 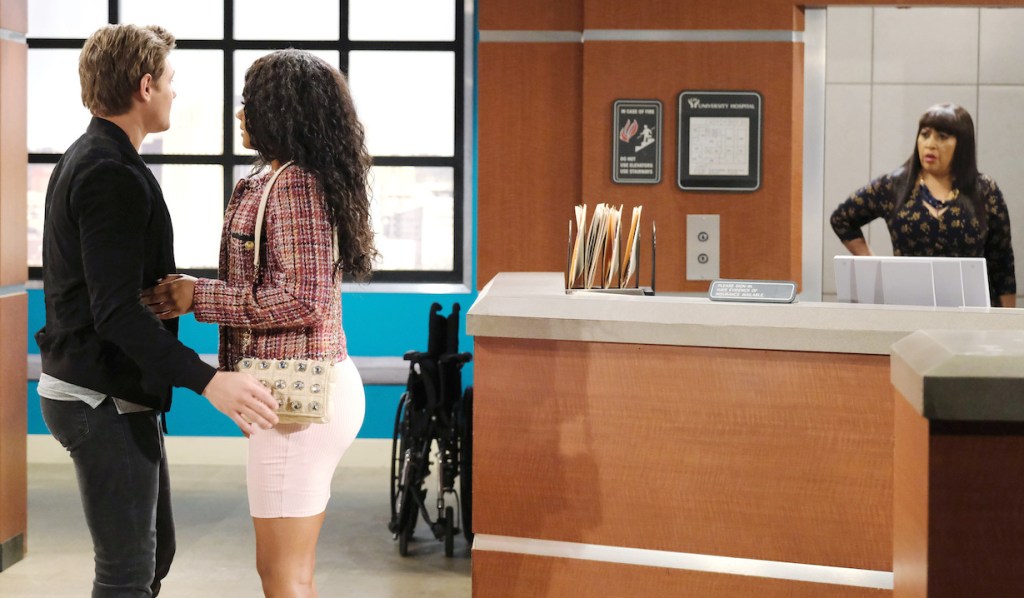 As TR tries to placate someone on the phone about money, he sees Beth near the elevators. She assures him she’s only there to get some painkillers and will head back to the hotel. He wants her out of Salem, noting there’s no way she can do a movie looking like that. She reminds him he did that to her. He warns if she tells anyone what he’s done, he’ll kill her. She rushes to the elevator.

Paulina walks up wondering if that was TR’s ex. He says she decided to drop out of the movie and move back to California. But he has a higher priority right now and says he has a question for her. 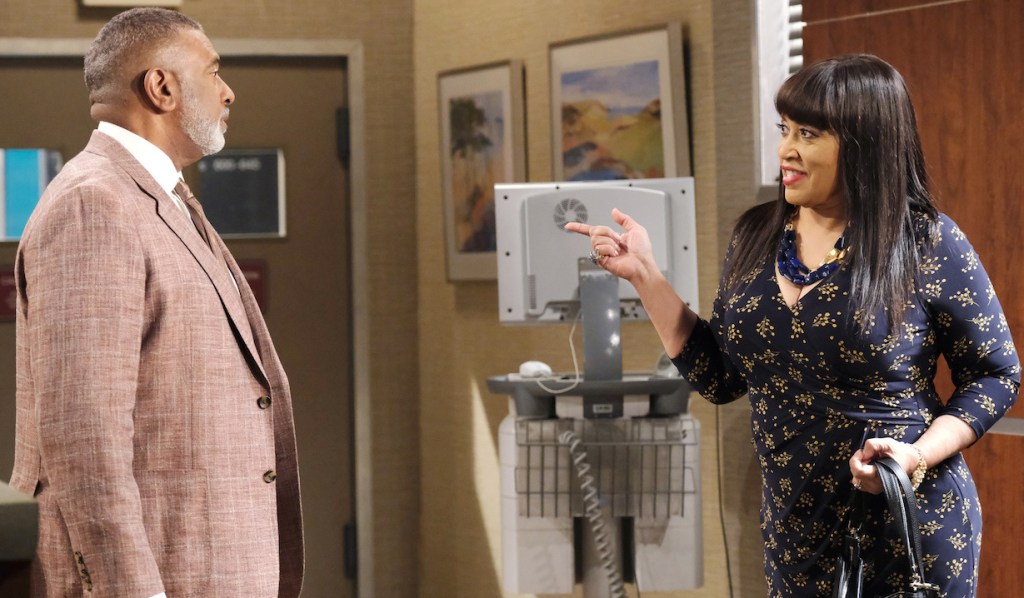 In the Square, Beth books a plane ticket over the phone. After hanging up, she gets a call from Lani, who wonders what she wanted to tell her before. Beth says it wasn’t important and hangs up.

In Eli’s room, Lani tells Abe she feels like Beth was hiding something. After Abe leaves, Lani sits with Eli and tells him how much everyone loves him. She takes his hand, vowing to never give up on him. She tells him how much she and the kids miss him. They’ll all be there waiting when he decides to come back to them. Eli’s eyes flutter open. 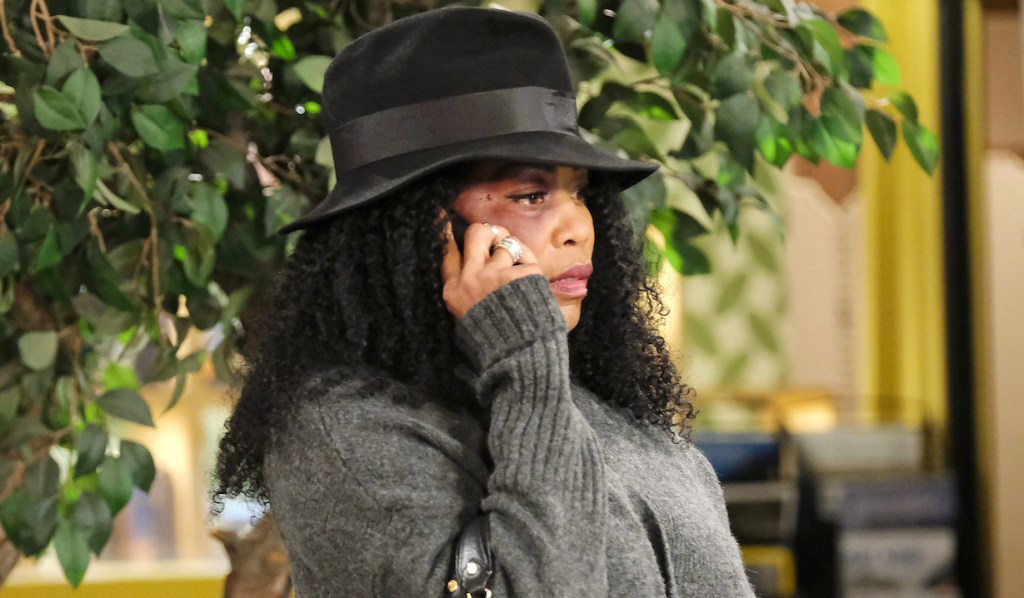 Susan races into Ben’s apartment after he calls. He hopes her powers can connect him and Ciara like they did before. She instructs him to bring her something of Ciara’s. He hands her a bike helmet, but she doesn’t get anything off it. She urges Ben to talk to Ciara instead.

Asleep on a couch in the cabin, Ciara hears Ben’s voice. He needs her to tell him where she is. She wakes up and says Ben is alive. She felt him reaching out to her, but “Allie” says it’s impossible. She wants to go to him, but “Allie” reminds her Evan will kill her if he finds her. Ciara wonders why the cops aren’t there to stand guard like Rafe promised. “Allie” says they were there while she was asleep and made it clear she’s in danger, so she needs to stay there. 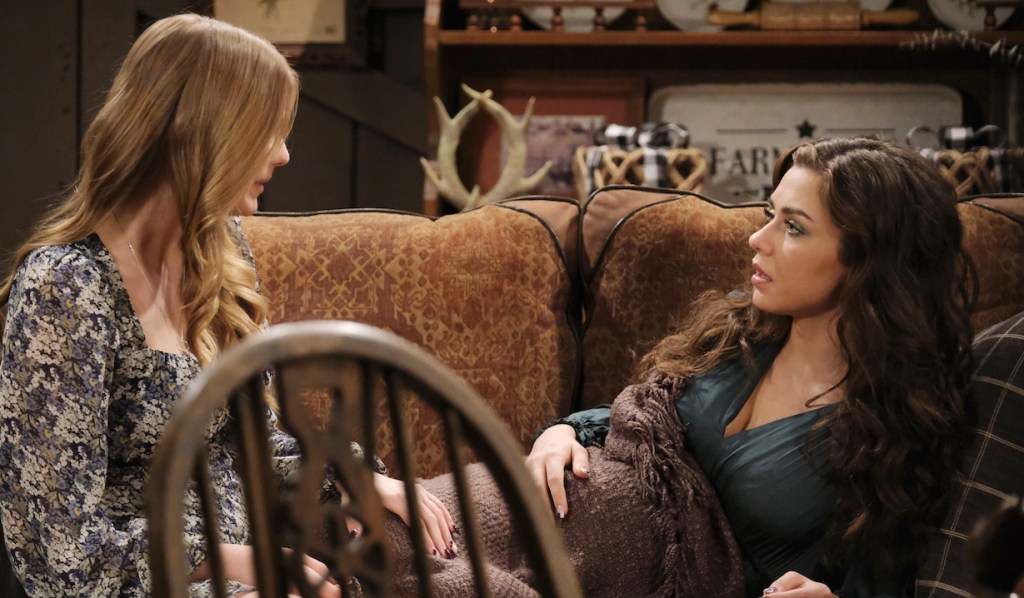 Back at the apartment, Ben tells Susan he felt something happening with Ciara. Susan thinks the devil is messing up the signal. She promises they’ll find Ciara though because love will find a way. Ben tells Susan about their Romeo and Juliet dream. She orders him to get the book.

When Ciara hears Ben reciting Romeo’s lines, she recites Juliet’s lines back to him. They even see each other, until AllieDevil breaks their connection. Ciara tells “Allie” that Ben is alive and she’s going to find him. “Allie” won’t let her go anywhere. When Ciara heads to the door, a steely look washes over AllieDevil. Ciara stops and says her water just broke.

Johnny shows up at Ben’s apartment. Susan embraces him as he thanks her for saving him. As Ben fills Johnny in on Ciara and Allie, Susan realizes Ben and Ciara aren’t the only ones psychically connected — Johnny and Allie are too. 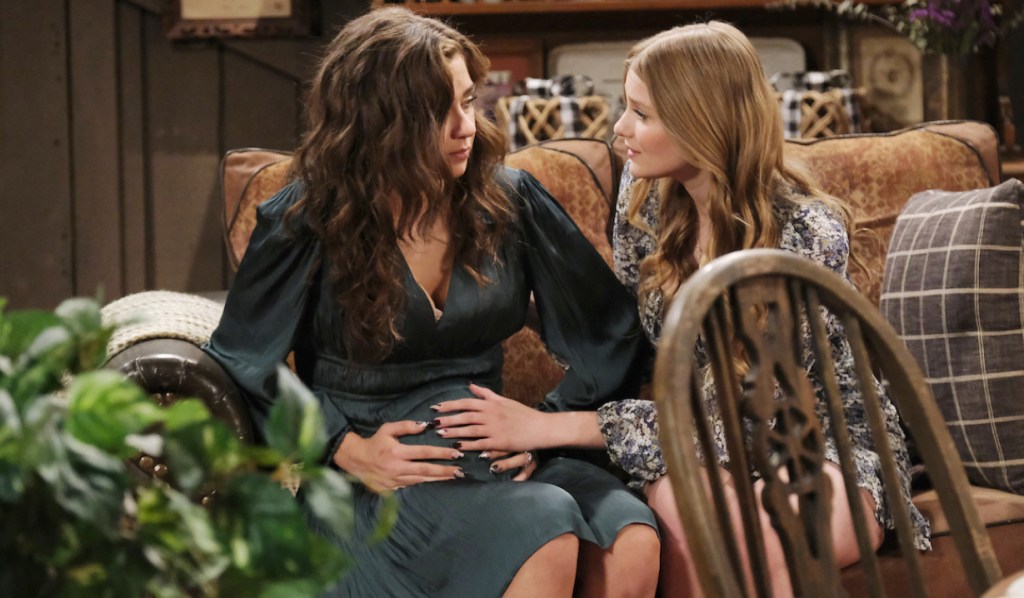 Next on Days of Our Lives: Ciara goes into labor, and Paulina gets a proposal.

Relive Lani and Eli’s love story in the photo gallery below. 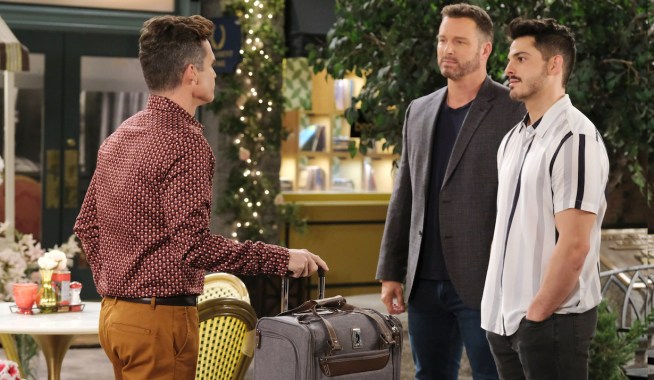 Leo's Out For Blood After Craig Rejects Him, While Gwen Enjoys Her Own Form of Payback

Eli Wakes Up From His Coma and Remembers TR Shot Him — Plus, Ciara's Water Breaks 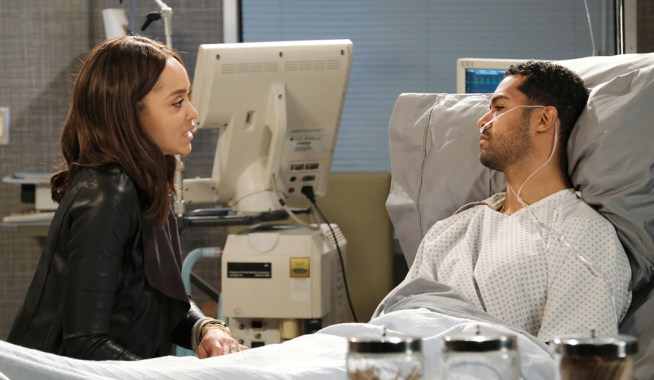