Monday, May 2, 2022: Today on Days of Our Lives, Johnny shocks Chanel, AllieDevil brings Ciara to the cabin, Jake puts the pieces together, and EJ confides in Rafe. 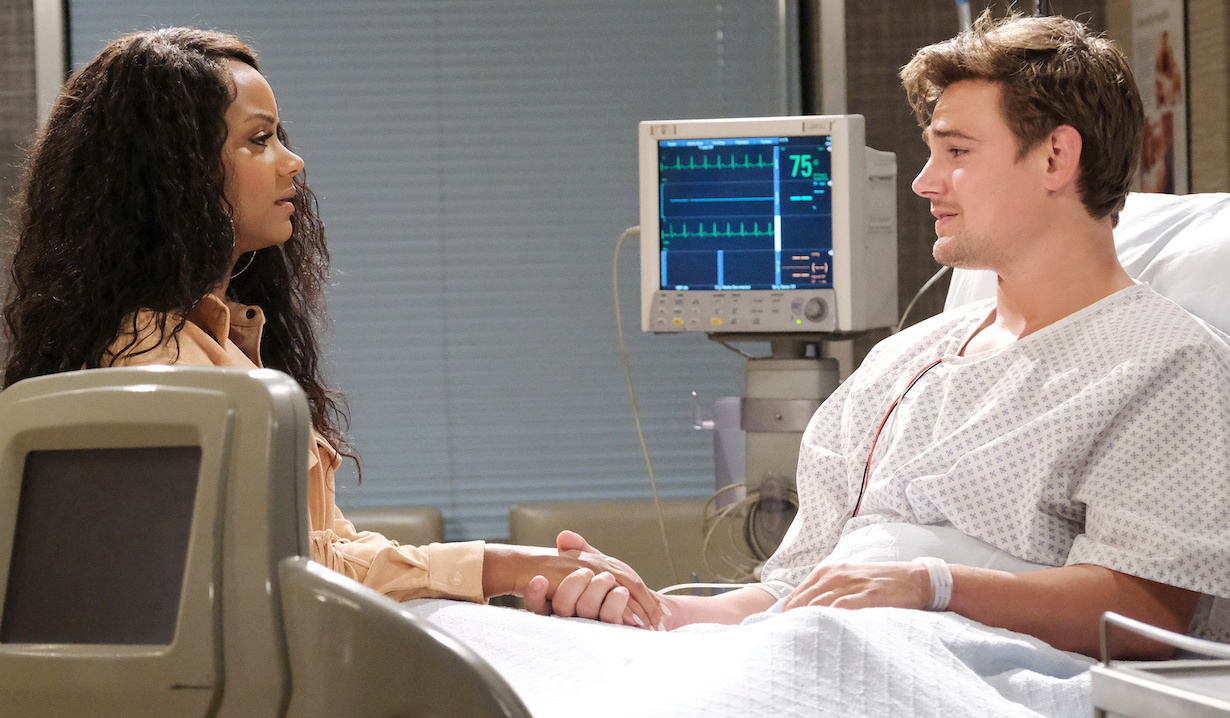 At Brady’s Pub, Kayla’s distracted while talking with Steve. He knows she’s missing her job. She adds that she’s angry over getting fired. Steve suggests they throw darts to take her mind off it.

At the hospital, Johnny approaches Chanel and Tripp. Chanel starts to walk away, but Johnny urges her to listen to him. EJ pipes up and says Johnny was possessed by the devil. Chanel scoffs and Johnny passes out. 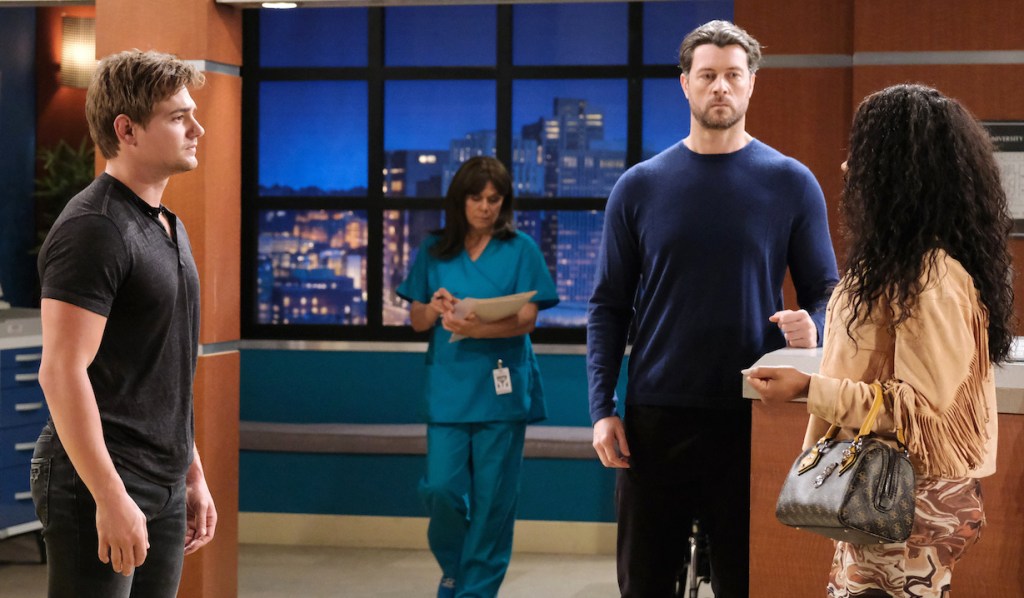 After Tripp settles Johnny into a hospital bed, Chanel walks in. She asks if he was really possessed by the devil. He confirms he’s been possessed since the holidays. Chanel recounts how awful he made her feel when he dumped her in front of everyone. Johnny declares it wasn’t him. He doesn’t even remember it. All he remembers is how amazing she made him feel. She is everything he ever wanted and there’s no way in hell he would have asked her for a divorce.

As Chanel recalls how much pain she was in, Johnny reveals he knows she slept with Allie. He also knows about Tripp. She explains her mother stopped them before they could make a drunken mistake. Johnny jokes, “I knew I liked Paulina.” Johnny explains that the devil chained him and tortured him with scenes of her making out with Tripp. Chanel wonders why the devil left his body. And where did he go? Johnny gently tells her the devil went into Allie. 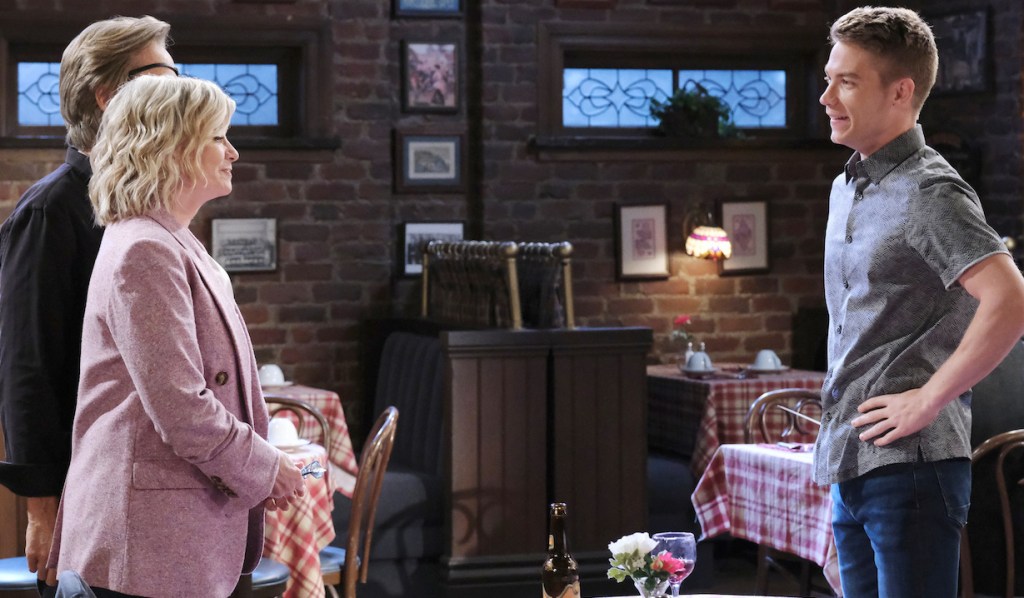 Outside Johnny’s room, EJ tells Tripp Allie is possessed. Tripp panics, as EJ leaves to talk to Marlena about her granddaughter.

Later, Tripp walks into the Pub where Kayla’s beating Steve at darts. He tells them about Allie’s possession and Johnny’s before her. After they process everything together, Tripp leaves to go back to work.

In her office, Marlena gets a call from Belle. Her eyes widen as she says, “Johnny was what?” After Marlena hangs up, EJ barges into her office. He says they need to find Allie and tell Samantha… right now. Marlena calls and leaves her daughter a message.

At his apartment, Ben tells Rafe and Jake his theory that Allie is possessed and kidnapped Ciara. Jake can’t remember what happened when he was knocked out. Ben thinks they can get Marlena to tap into his subconscious.

Ben and Jake rush to Marlena’s office and tell her Allie kidnapped Ciara. Marlena agrees to hypnotize Jake, as EJ leaves. While under, Jake recalls hearing Allie’s voice. He can’t understand what she’s saying though. He can hear other voices, but they’re muffled. Marlena asks if he can hear Ciara’s voice. Jake hears her crying for Ben to wake up. Marlena implores him to use all his senses. Jake feels a hand on his wrist and then hears Allie say Ben is gone. When Marlena brings him out of hypnosis, Jake apologizes to Ben for not knowing where Allie and Ciara went. At least they know the women are together, Ben says. But why did Allie say he was gone? As they rehash what Jake told them, Jake realizes the devil Allie made him look like Ben and was pretending to take his pulse. Ben says, “Oh my God. Ciara thinks I’m dead.” 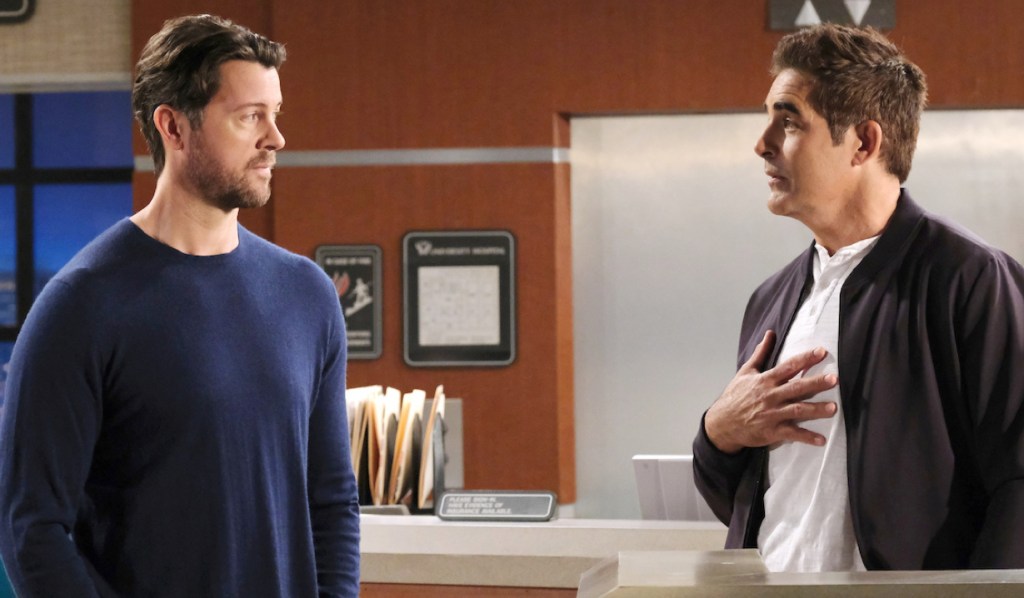 EJ runs into Rafe near the nurses’ hub. EJ shares how awful it was to walk in and see Andre strangling Johnny. He wonders what kind of person he is considering he had no idea how much trouble his son was in. Rafe points out no one knew what was going on. EJ counters that he is Johnny’s father. He should have questioned the changes in him instead of being proud of his outrageous behavior. He thought Johnny was finally embracing his DiMera birthright. What does it say about him, that he was finally proud of his son when he wasn’t himself at all? EJ chuckles at the irony of him leaning on Rafe for comfort. Rafe says they both care about Johnny and all that matters is he’s going to be okay. Besides, EJ still has time to get things right with Johnny. 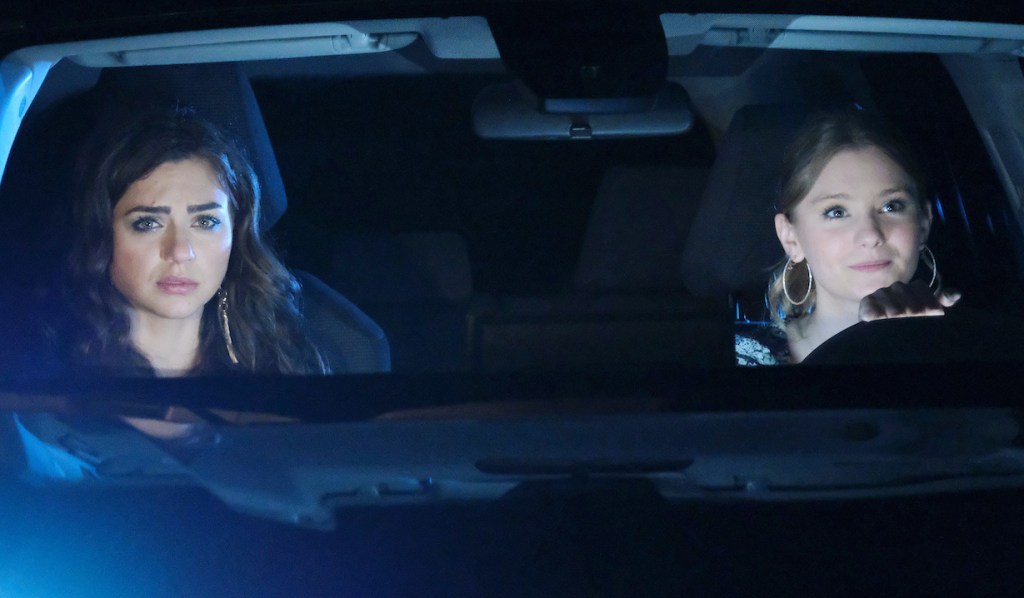 In the car on the side of the road, AllieDevil pretends to call Rafe again for Ciara, who just wants to go home. A voice that sounds like Rafe’s urgently tells her to get to the cabin to hide from Evan. Ciara reluctantly agrees.

At the cabin, Ciara cries over Ben. “Allie” tells her to focus on her baby. Ben would want her to do whatever needs to bring him into the world safe and sound. Ciara asks for a phone so she can call her mom. “Allie” looks to her phone and says there’s no service. “I’m afraid it’s just you and me,” AllieDevil says.

Next on Days of Our Lives: Xander appeals to Gwen, and Leo’s out for revenge.

Take a look below at our photo gallery of soap actors who’ve shockingly never been nominated for a Daytime Emmy. 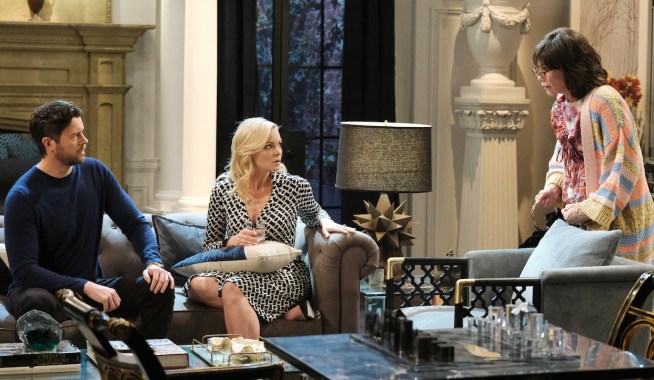 Susan Puts All the Pieces Together Just as Andre's About to End Ben and Johnny — Plus, AllieDevil Takes Off With a Grieving Ciara

Xander Bargains With Gwen For the Antidote, While Chad's 'Secret Life' Is Exposed 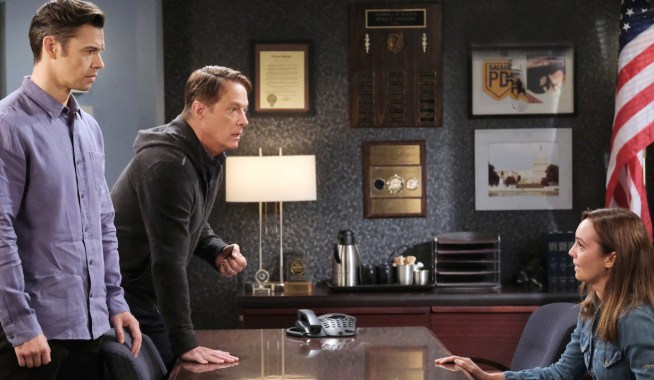