Sarah Finally Knows Who She Is, But There’s One Big Catch — Plus, Belle Reels Upon Meeting With Jan

Tuesday, April 5, 2022: Today on Days of Our Lives, Gwen and Gabi commiserate, Ava makes herself at home, the contents of the syringe take effect, and Belle confronts Shawn. 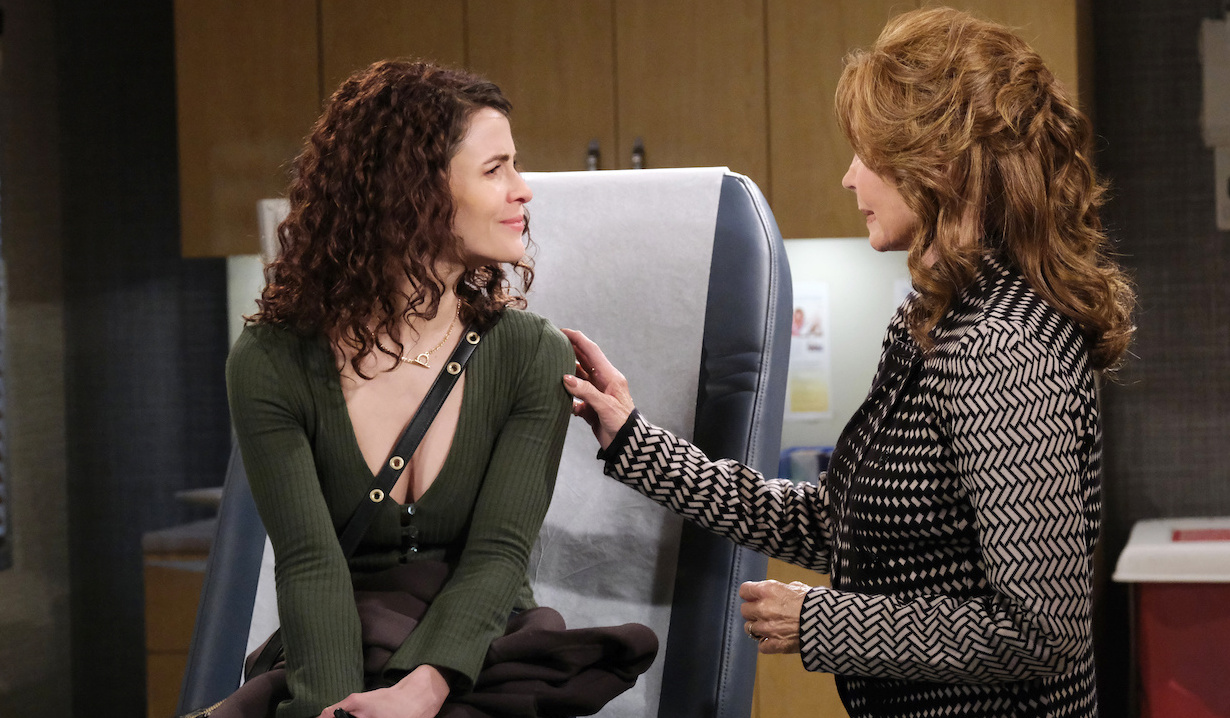 Gwen impatiently waits at The Bistro to hear from Xander. Gabi enters and sits down with her, over Gwen’s objections. Gabi reminds her she saved her from the drug Abigail tried to inject her with. Gwen retorts that she sealed Sarah’s fate with that move. After Gabi gets up to speed, she notes with a smirk that Sarah and Xander will undoubtedly get back together. Gwen asks her to gloat somewhere else. Gabi isn’t gloating, she’s sympathizing. She confides that she already lost the man that she loves. Gwen knows she made Jake happy and is genuinely sorry for her. They commiserate. 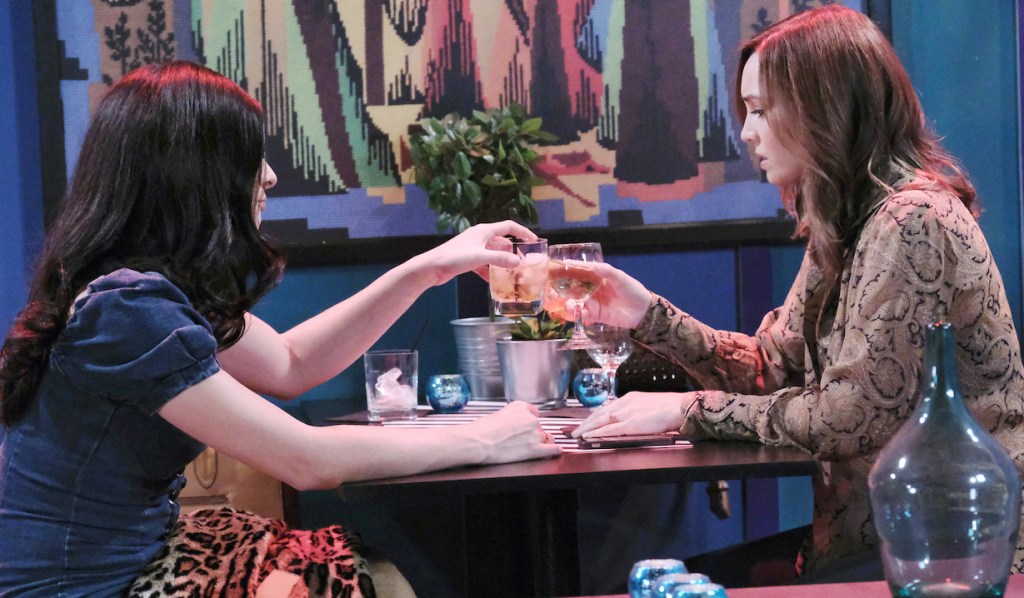 After Anna sticks Sarah with the syringe at the hospital, Sarah stalks off to have her arrested. Xander follows, and Maggie asks if Anna’s lost her mind. Anna points out that the hospital deemed the drug safe enough, but Maggie wanted to wait until it was fully vetted. She calls Anna selfish and storms away to confer with the lab. Tony looks at Anna with disappointment and asks, “How could you?” They argue, leading Tony to warn that she could be in very deep trouble. 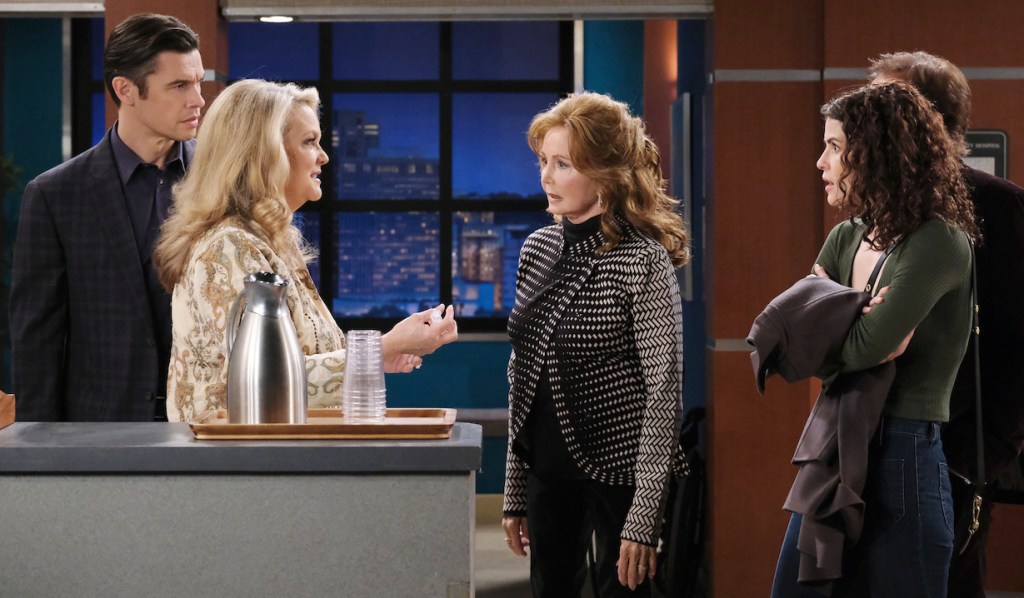 Rafe finds Shawn working at the station. He tells him to go home to his wife, but Shawn relays she’s at Statesville, probably visiting EJ. He brings up how the devil not only set up EJ, but almost ruined his and Belle’s anniversary night. Rafe says at least Belle walked in before anything happened with Jan. Right? Before a guilty-looking Shawn can answer, Sarah shows up to report a crime. As she rants, as Renee, Xander enters and helps to fill in the blanks for a confused Rafe.

Sarah and Xander return to the hospital with Rafe and Shawn, who puts handcuffs on Anna. After Anna’s led away, Sarah wants to get back to the blood tests for her wedding. Tony says he’ll meet her in the exam room. She kisses his cheek and saunters off. Xander tells Tony they just need to wait now and pray the drug works. Maggie returns, as Tony heads off. 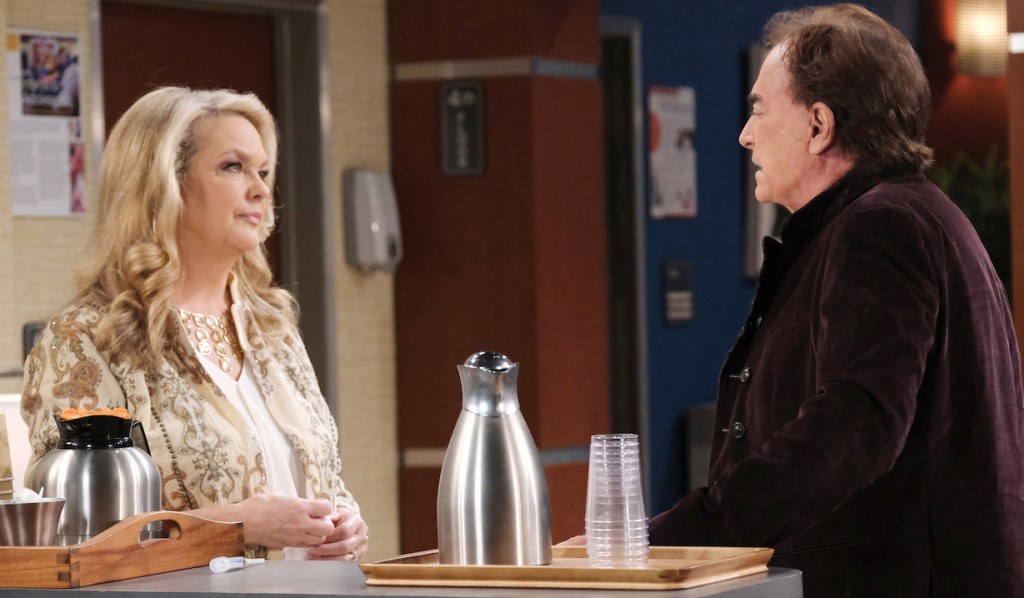 Maggie tells Xander the drug is probably safe, but the lab wants to flush it out of Sarah’s system just in case. Xander counters the drug could work and they could finally have their Sarah back. She’s too worried about the drug’s effects though. Xander knows she’s right and asks to stick around while Maggie checks on Sarah. Maggie thinks having him around will make Sarah more upset. She’ll keep him updated though. After Maggie departs, Xander messages Gwen to talk.

More: Catch up with our weekly mini soap recaps. 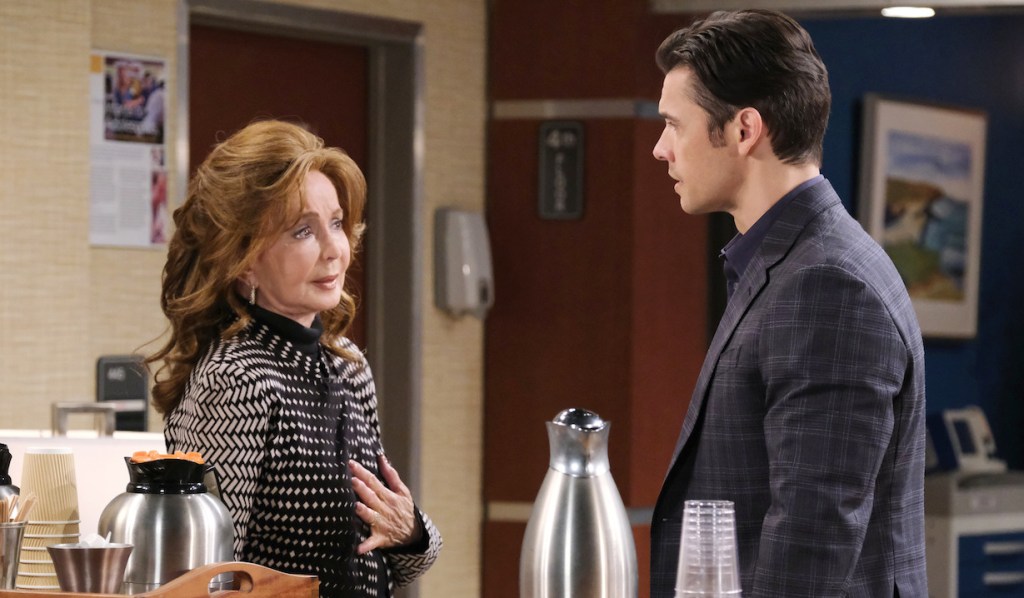 Jake brings Ava to his place. He grabs them beers as she bemoans losing Rafe. She actually thought if she changed her old ways, she’d be worthy of his love. But that was all for nothing. Jake empathizes. He tried to be all corporate for Gabi, but, at the end of the day, he’s just a simple mechanic. He thinks Ava is more badass than a domestic goddess herself. After giving her the grand tour of his studio apartment, with no couch, she asks what the sleeping arrangements are. He’ll take the floor while she gets the bed. She thanks him for what he’s doing for her.

After Jake takes a shower, he hears a knock on the door. He opens it to Gabi, who sees Ava in his bed. She asks, “What the hell is she doing here?” 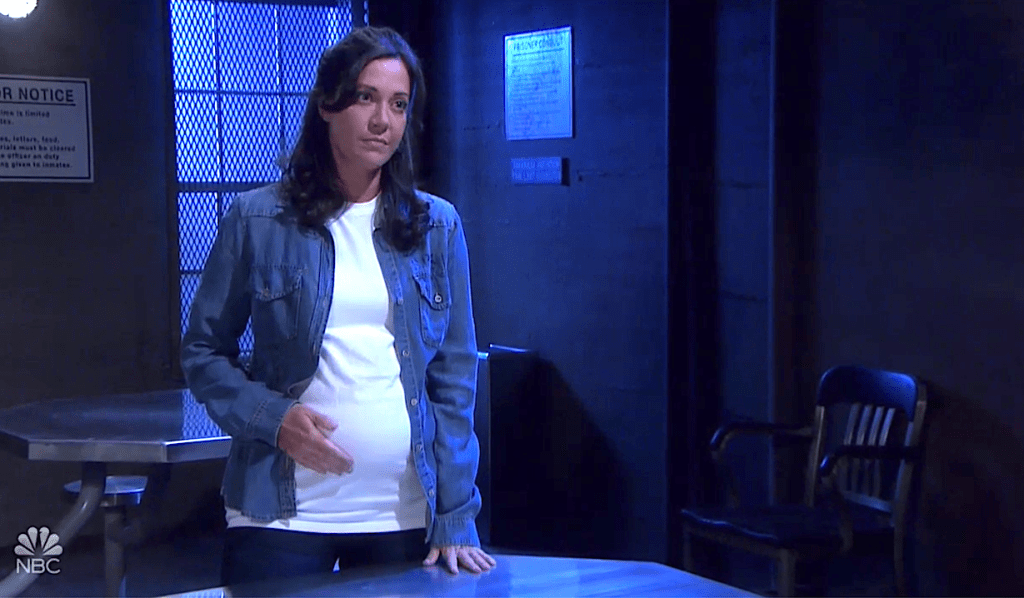 At Statesville, Jan reveals her baby bump to Belle, who scoffs. In a mocking tone, she asks who the father is. Jan says, “Who else? Shawn Douglas.” Belle doesn’t believe it, but Jan declares she had sex with Shawn while disguised as her. Belle says Shawn would have told her, but Jan thinks he wanted it to be their little secret. Belle questions if she’s really even pregnant. Jan puts her hand on her belly to convince her. An emotional Belle insists Shawn will be horrified to learn of this… if he really is the father. Jan says they should try to get along because she and the baby will be part of Shawn’s life from now on.

After Shawn brings Anna to the station, he returns home to Belle. She tells him she met with Jan who is pregnant and claims he’s the father. 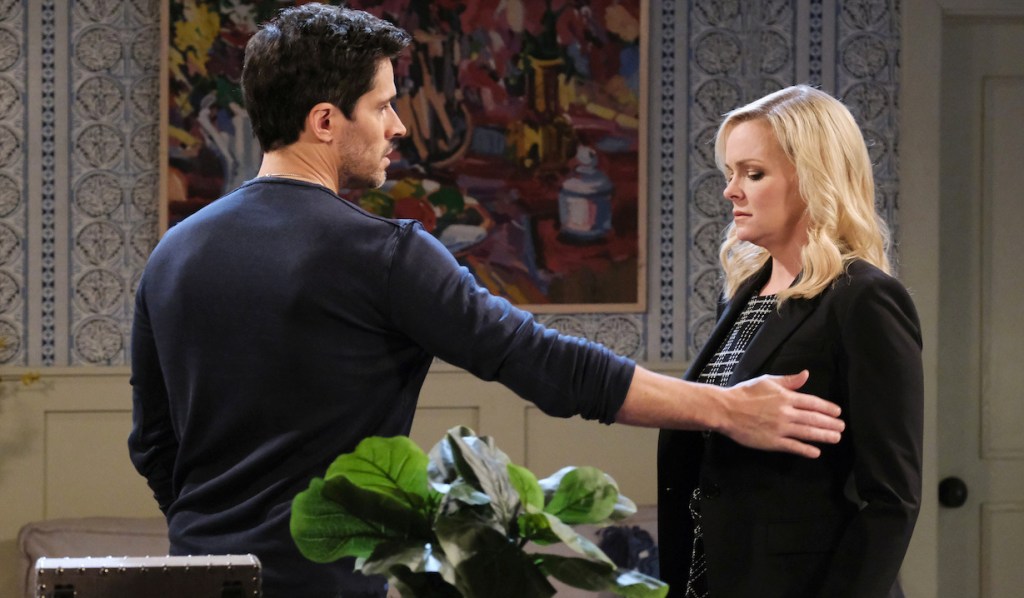 Tony comes to the station to talk with Anna in the interrogation room. He hired an attorney for her, but she thinks she won’t need one because Sarah will be grateful once she gets her memory back. Tony says she better pray that’s true for Sarah’s sake and her own.

Maggie joins Sarah in the exam room. Sarah talks as Renee, but then suddenly stops. Maggie calls her name, to which Sarah responds. Teary-eyed, Maggie, says, “You know who you are?” Sarah looks at her wide-eyed. She grins and says with a baby voice, “I’m Sarah Horton and you’re my mommy.” Maggie cries.

As Xander updates Gwen at home, Gwen flashes back to sneaking into the lab and switching the antidote with Rolf’s mind-altering drug that she held on to. 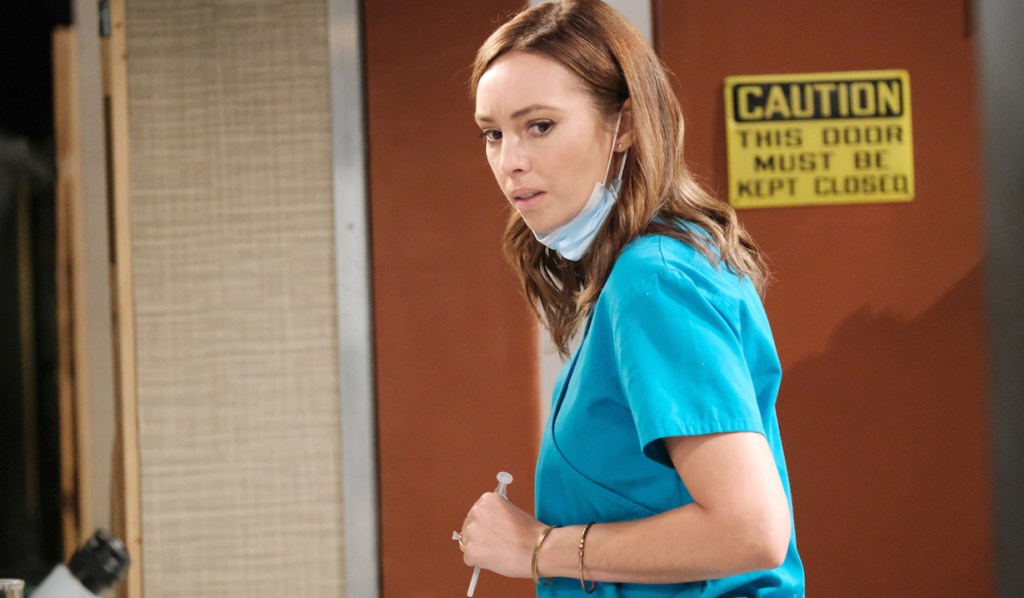 Next on Days of Our Lives: Gabi gets an unpleasant surprise, and Kate makes a demand of Roman.

Check out the photo gallery of the stars who have played two roles on one soap. 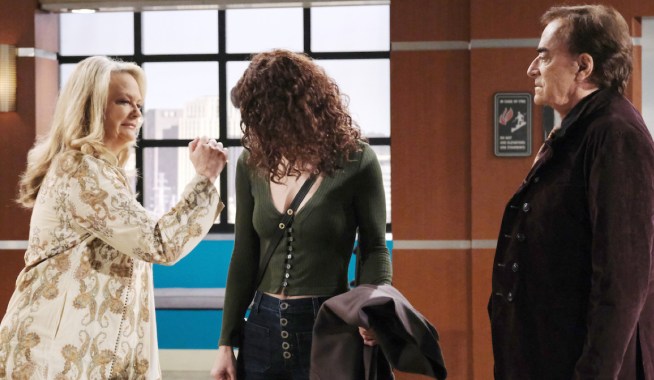 A Frustrated Anna Takes Matters Into Her Own Hands, While Xander's Silence Speaks Volumes to an Insecure Gwen — Plus, the Devil Body Hops

Belle Walks Out After Confronting Shawn About Jan, While Gabi Pleads With Jake For Another Chance 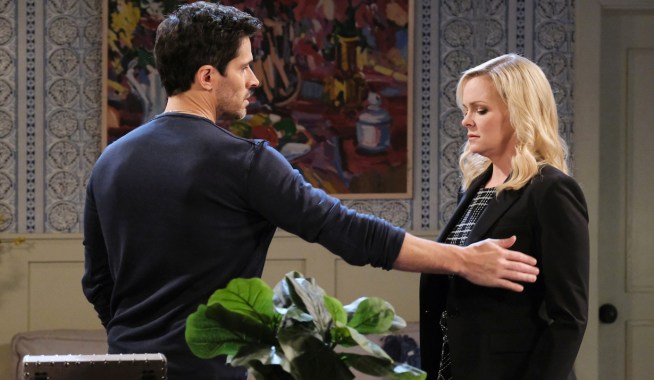 ‘Naomi Judd: A River of Time Celebration’: CMT Memorial’s Producers Tell How the Show Came Together in Seven Days