Tuesday, March 29, 2022: Today on Days of Our Lives, Brady and Chloe consummate their reunion, Craig has a solution for Leo, and Gwen and Xander get honest about Sarah. 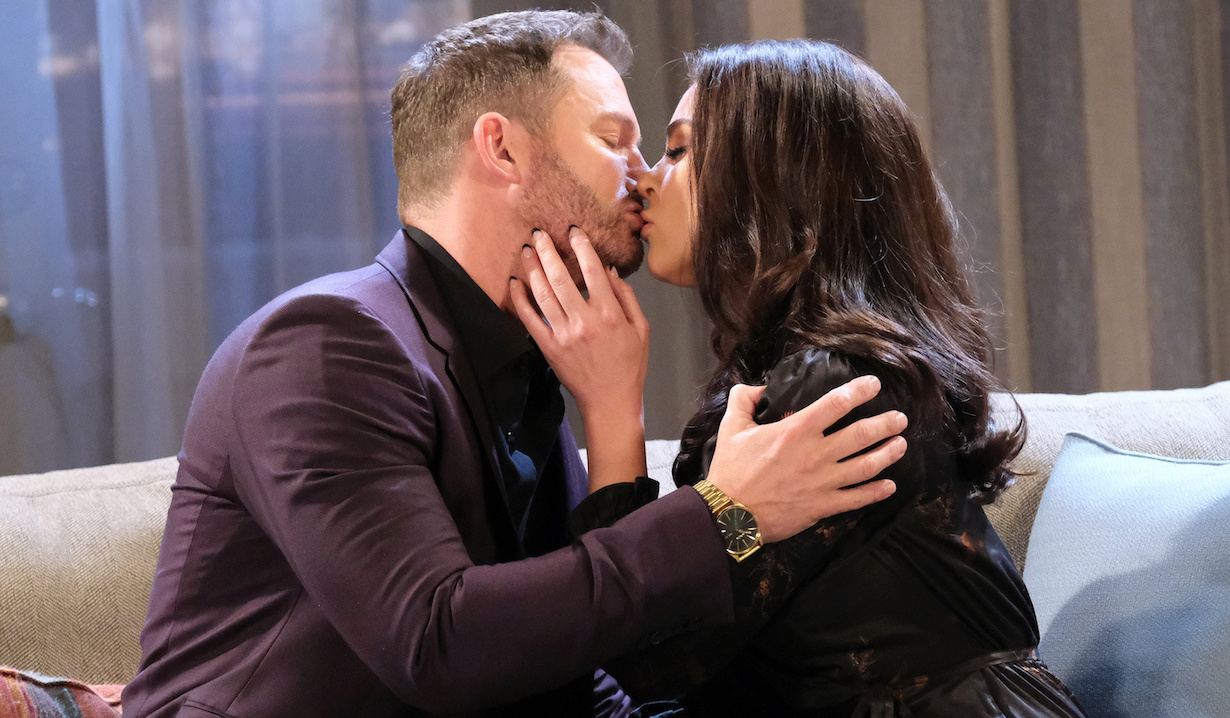 As Xander and Gwen dine in the Square, he asks if she’s decided to go see Rolf with him. She declines. Xander assumes she doesn’t want Sarah to get better. She wonders why she would be in such a rush for that to happen, assuming it’d lead to them reuniting. Xander knows this is difficult for her, but points out their kind of connection doesn’t come along often. She doesn’t think it compares to his and Sarah’s “epic love story.” He declares he loves her. She reminds him she’s his fiancée now, but what happens when Sarah gets better. Will he still want to marry her, or Sarah? Xander wishes he had an answer. He doesn’t blame her for being upset, but he has to see this through for Sarah. 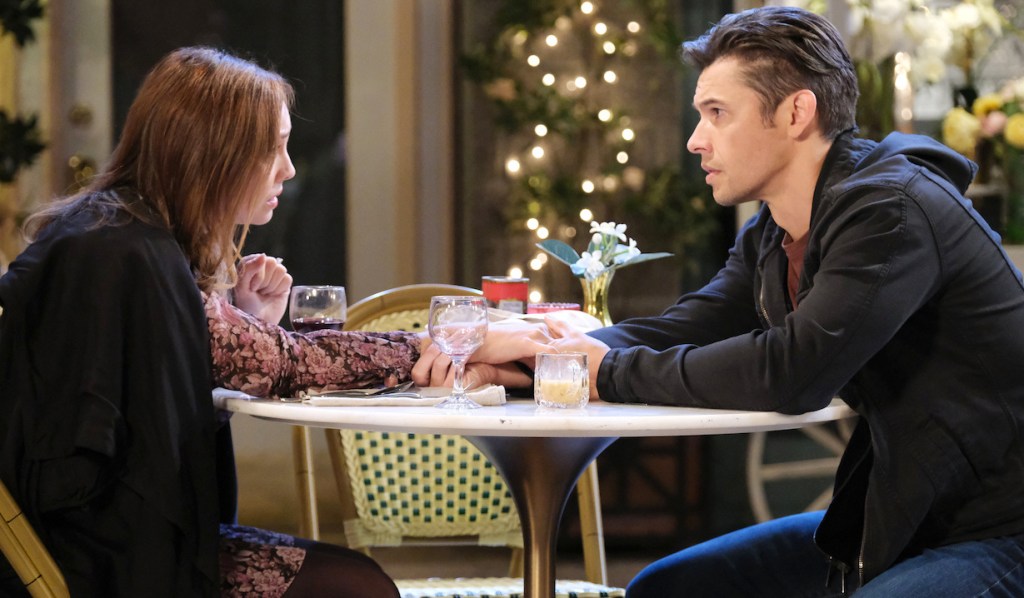 Craig walks into his Salem Inn room to find Leo in bed with Chad. He fumes and orders Chad to get dressed. Chad “insists” he didn’t intend for Craig to find them, but Leo says he did. He explains he texted Craig to come home, that way they could have a threesome. Craig is speechless, but Leo thinks this will bring them closer. When Craig starts coming around to the idea, Chad jumps out of bed. This is not what he signed up for. Leo knows. He spotted his and Abigail’s bad acting from a mile away. Chad counters Abigail is a great actress. He hastily dresses, but before he can leave, Craig asks what his stake is in trying to break them up. Chad was just helping his friends who wanted to open Craig’s eyes to this “dirtbag.” Once Chad’s gone, Craig assumes Chloe’s involved. Leo wishes there was a way to convince her he’s truly in love with him. Craig says there is something he can do… “Marry me.” 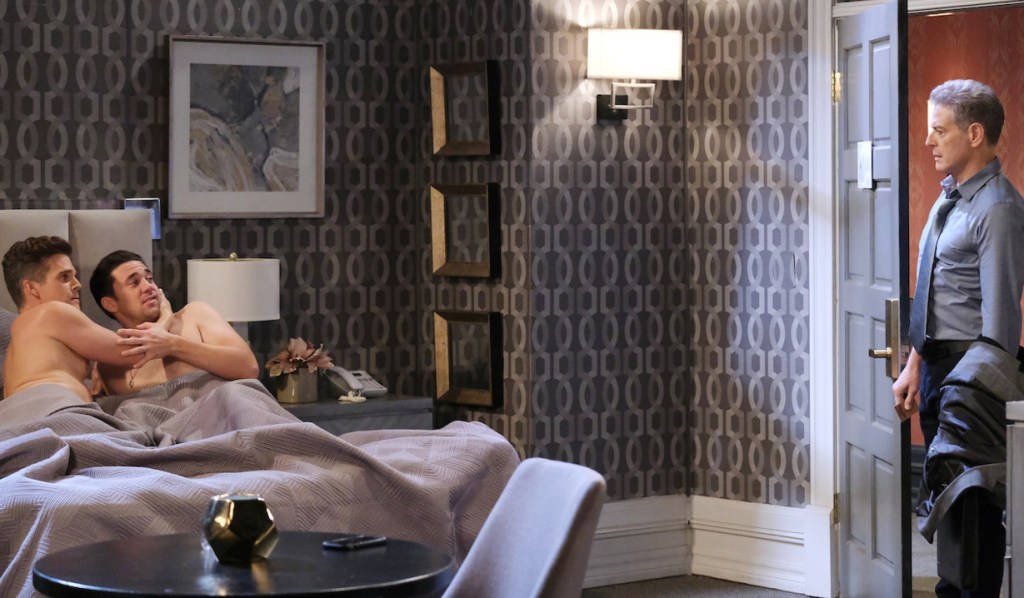 Chad rushes out of the Salem Inn and runs into Xander and Gwen in the Square. He confirms to Xander he’s planning to talk to Rolf about the antidote and beelines it out of there, looking at his phone. Xander thinks Stefano’s baby boy is just the person to convince Rolf to help. Gwen genuinely hopes Chad is successful, but if he’s not, then she’ll give it a go… for him. 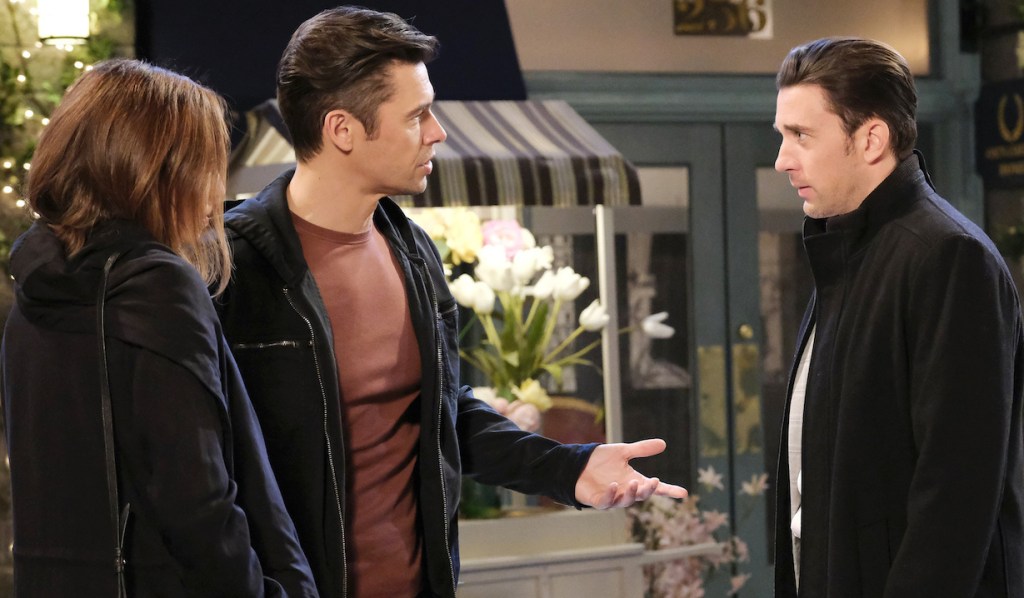 Maggie finds Tony drinking scotch in the Kiriakis living room. She thanks him for moving in there for Sarah. She also credits Anna for going along with it. Tony happily relays that his wife is on board with it, but she appears to say, “Onboard, my eye.” Sarah joins them and tells Anna she and Tony are back together in every way imaginable. Anna goes off on Sarah, prompting Tony to intervene. He asks to talk to Anna alone, so Maggie takes Sarah to the garden. 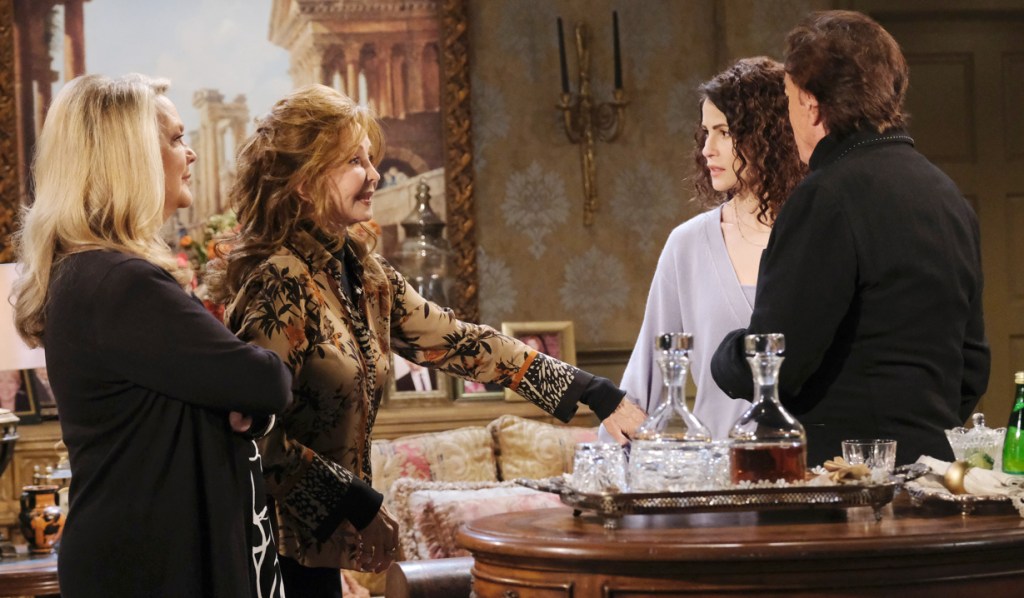 Alone, Anna tells Tony he belongs home with her. Tony reminds her this is temporary until they can find a cure for Sarah. She wonders what happens if they never find one. She won’t stand there and watch another woman try and steal her husband. Tony shouts that he has no intention of going to bed with Sarah. He urges her to go home.

Sarah returns after Anna leaves. She grabs his and hand to lead him to her bedroom, but he says they have separate rooms. When she asks why, he responds, because he’s still married and Anna could use his infidelity to take him to the cleaners and drag their divorce out in court. He urges her to be patient just a little longer. Sarah will try if it means getting rid of Anna. She saunters out of the room.

More: Ava and Nicole get slap happy in Days promo 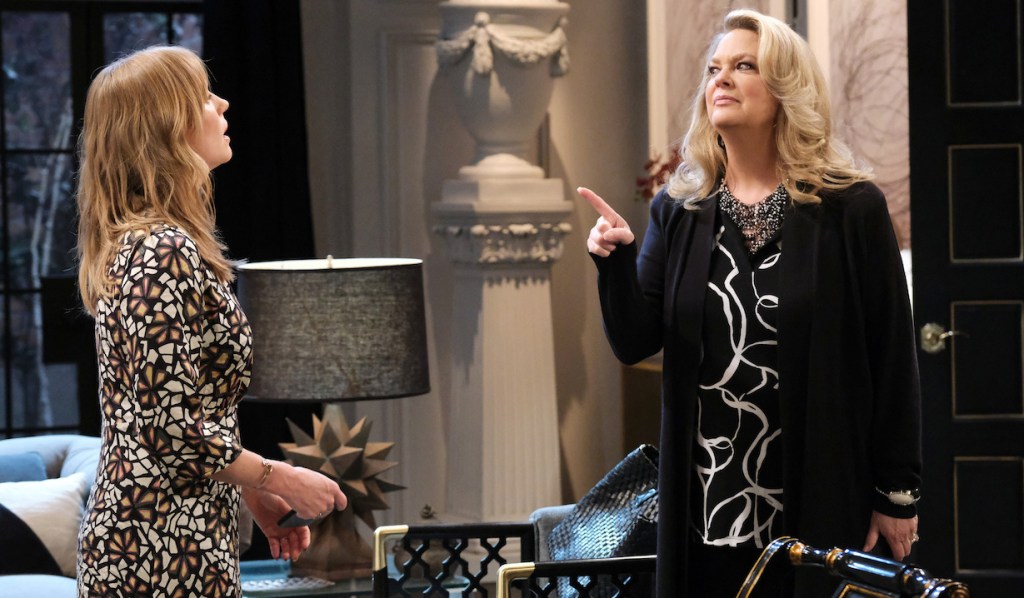 At the DiMera mansion, Chloe and Brady thank Abby for helping with the Leo ruse. As they talk, Abigail learns Craig took Kayla’s job — probably at Leo’s insistence. After more discussion, Brady has to get home to Rachel and invites Chloe to go with him. Abigail promises to update them when she hears from Chad.

After they’ve left, Anna returns home. She confides in Abigail about Sarah/Renee trying to take her husband. Abigail in turn says her husband is pretending to want to have sex with someone he despises to help his friends. Anna chokes on her drink. “If Stefano could see his sons now… selflessly helping others instead of plotting world domination.” Anna gets a message from Tony who says he’s counting the seconds until he can return to her. 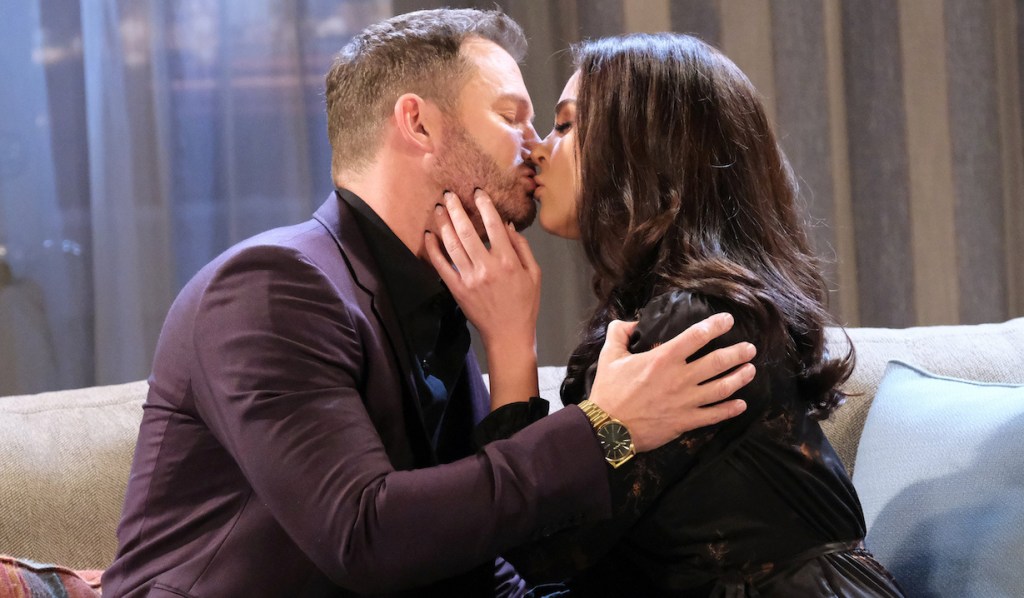 More: Why isn’t EJ out for blood?

At John and Marlena’s, Chloe worries about her father being upset with her. Brady thinks he’ll be grateful in the long run. Brady himself is grateful for her. She’s his constant. He can’t imagine his life without her. He leans in for a kiss. Chloe backs away, worried John or Marlena will find them. Brady doesn’t think it’d be the worst thing for his parents to find them making out like teenagers, but suggests going to his room. He wants to be with her, but will back off if he’s moving too fast. She says he’s not and they get more passionate. They move to his room.

Later in bed, Chloe gets a message from Chad about his failed efforts. She worries her father will be furious with her and it was all for nothing.

Next on Days of Our Lives: TR comforts Lani, and Marlena gets a shocking assist.

Check out the photo gallery below of Xander’s life, loves and many misdeeds in Salem. 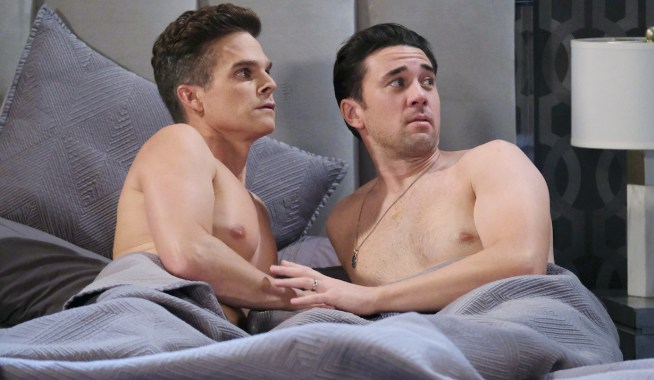 Chad Panics When Leo Takes the Bait, While Clyde Gives His Blessing to Eliminate [Spoiler]

Chad Visits EJ to Atone For His Sins, But Belle Interrupts With Her Own News — Plus, TR Comforts Lani Over Eli 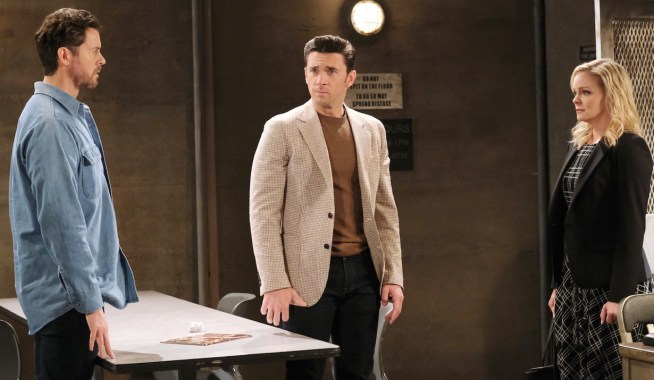