Monday, March 21, 2022: Today on Days of Our Lives, Chad and Abigail set a trap for Leo, Craig sets his own wheels in motion, and BelleDevil reveals a secret. 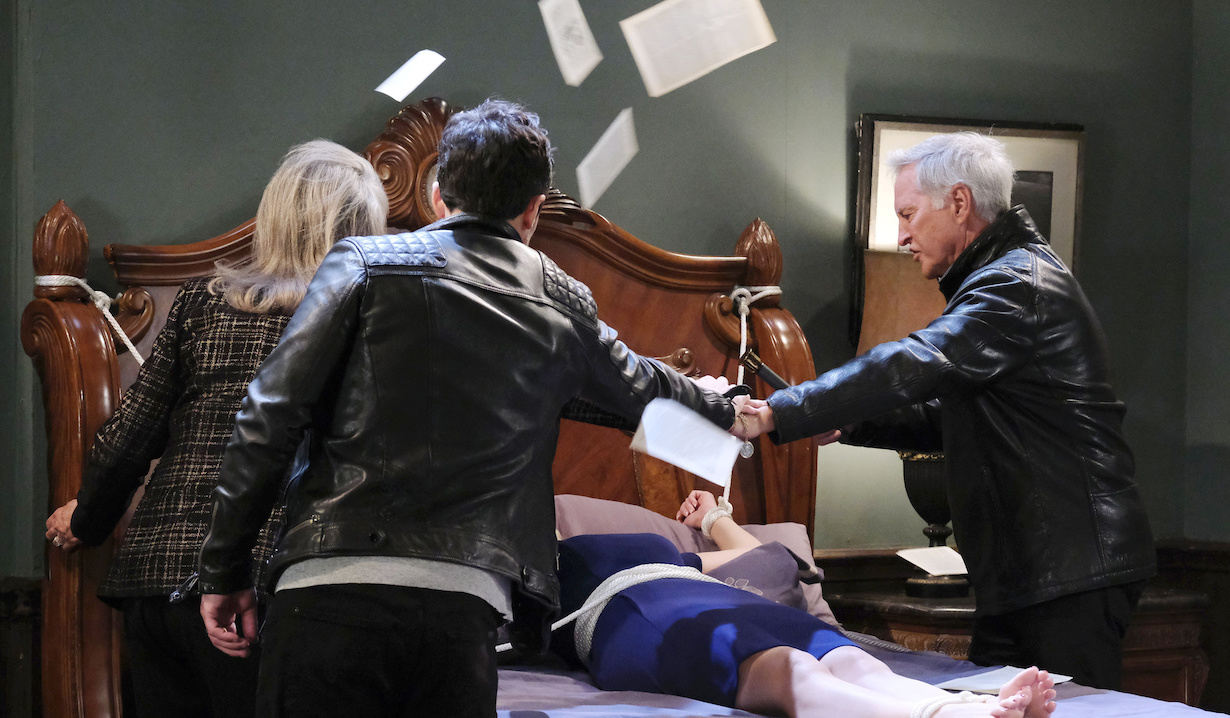 At the Kiriakis mansion, Chad’s face contorts as he mulls over Will and Sonny’s suggestion he take Leo to bed. After a few beats, he jumps up and shouts at his friends who are, “out of their ever-loving minds.” They explain all he has to do is get Leo in bed long enough for Craig to come in and catch them. Chad says there’s not one reason why he should help Craig see that he has a bad boyfriend.

Will asks him to do it for Sonny. It took a long time for Sonny to get over what Leo did to him, but he did. Now, he can’t sleep thinking he’s doing it to someone else. Tears run down Sonny’s face as he says it turns Leo on to watch him do the same thing to another man. He has to stop him. Chad thinks this is about revenge, not helping Craig, which makes Sonny chuckle. Why didn’t he just say that? Chad will do it because DiMeras invented revenge, but they owe him. Will adds that Abigail has a part in this as well.

More: The story that won Days the WGA Award 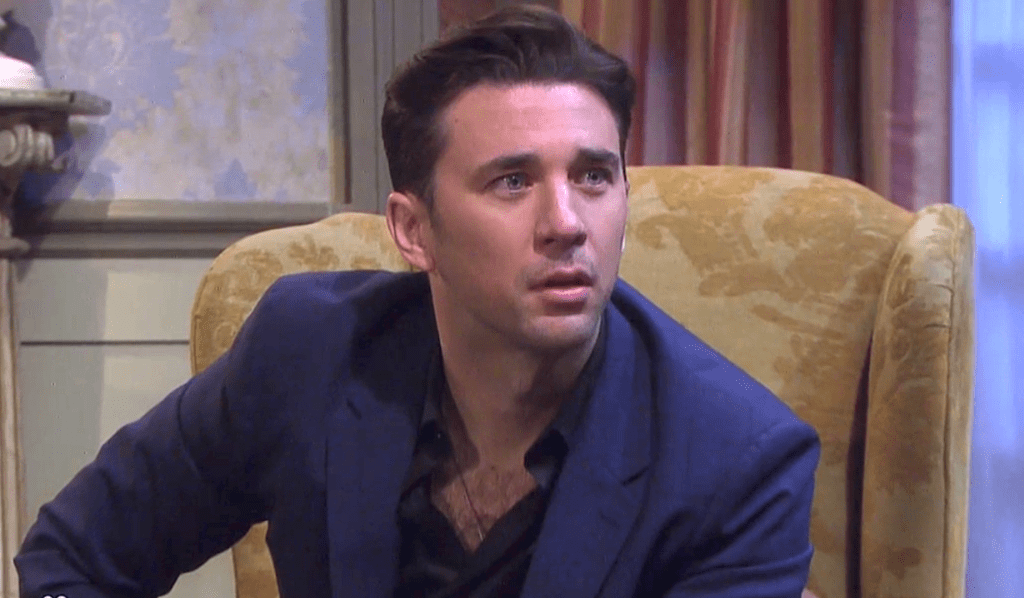 At the Pub, Leo badmouths Nancy as he tries to get Craig to go after Kayla’s job. Craig makes it clear to his boyfriend that there will be no disparaging of his wife. Leo apologizes, but calls it a sign that Nancy is making him look bad in New York, just as they’re presented with a new opportunity in Salem. It could be a whole new life for them. Craig expresses disinterest in it. Plus, he doesn’t want to go back to the money-grubbing social climber he used to be. Craig wonders why Leo wants him to be Chief of Staff so badly, anyway. Leo rattles off the baby switches and other unethical things that have happened under Kayla’s watch. The hospital needs Craig. He ponders throwing his hat in the ring. Leo suggests he get a board member to do it for him. Craig says, “I wonder where Seth Burns is.”

More: Catch up on all soaps with our weekly mini recaps 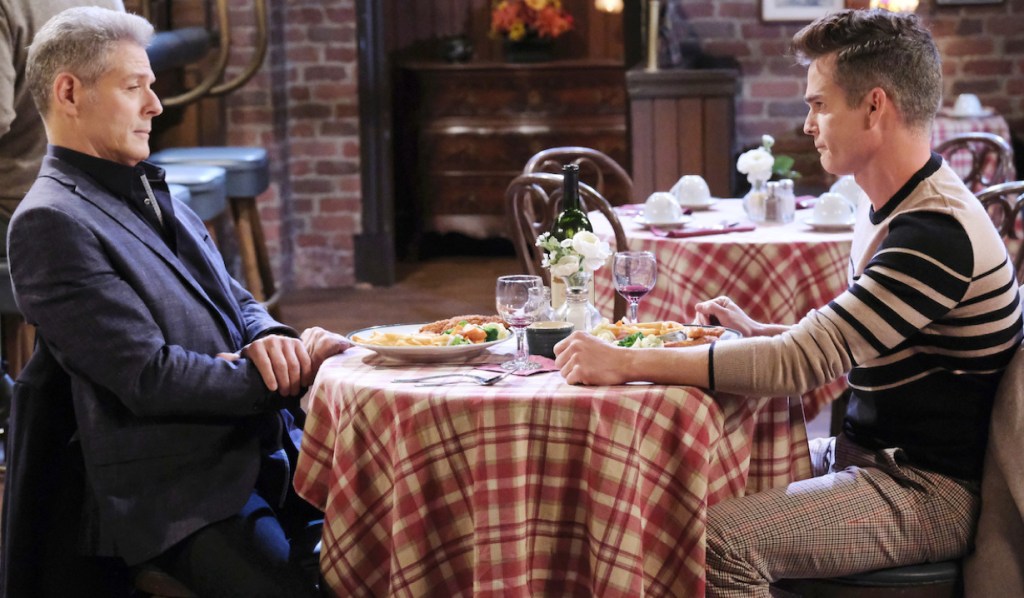 Kayla defends Marlena to someone on the phone at the hospital. She hangs up in a huff as Abigail shows up. She tells her niece the board is trying to get Marlena fired. Abigail says she’s there about Sarah. She feels guilty for leaving the syringe out for Kristen to use on her. Kayla emphatically states it’s Kristen’s fault, not hers. After she bemoans the state of her job — if someone wants it, they can take it — Abby gets a call from Chad.

Abigail arrives at the Kiriakis mansion and gets filled in on the plan for Leo. Though hesitant, she agrees to go along with it. They call the hotel and learn Leo and Craig are out of their room. After the DiMeras leave, Will and Sonny work out and then make out.

More: Remembering Days icon on anniversary of his death

Abigail and Chad stage a fight in front of the Salem Inn for an eavesdropping Leo’s benefit. Abigail pretends to be angry that Chad only lights up in regards to Will, Sonny, and that guy, Leo Stark. Leo’s mouth drops. When he reveals himself, Chad acts flustered upon introducing Leo to Abigail. Chad locks eyes with him and lets his gaze linger as Leo walks away. Leo turns back with a smirk, as Chad looks him up and down. Once he’s gone, Chad and Abigail shake hands. Chad says, “Hooked.”

Craig heads to the hospital and asks Kayla if there are any openings on staff. He’s even willing to start at the bottom. Kayla looks skeptical.

More: The struggle is real for Robert Scott Wilson 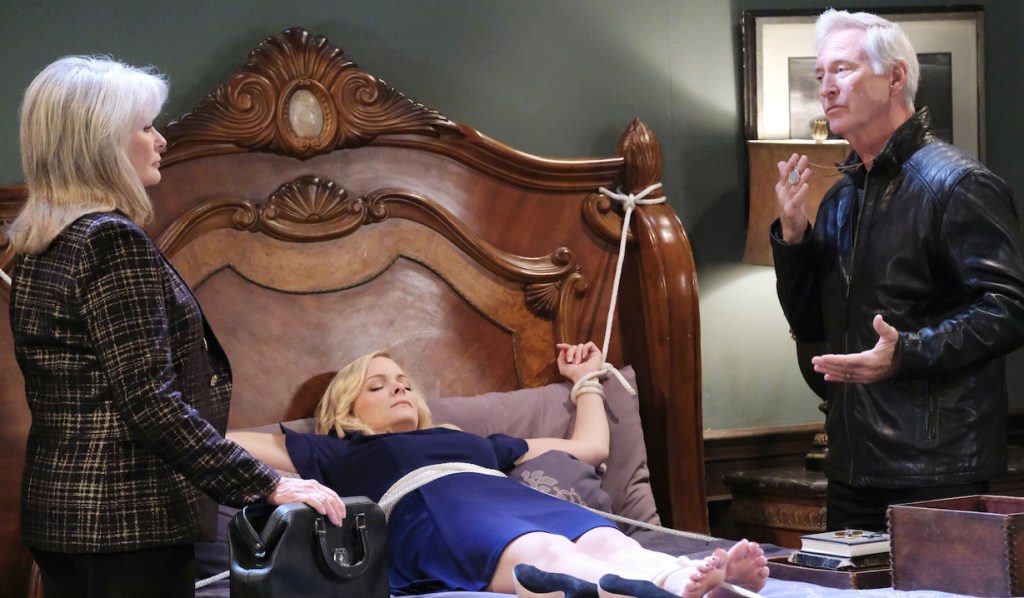 In Johnny’s bedroom, John asks Marlena to leave so he can exorcise their daughter. He wants to make sure the devil can’t jump into anyone else. So, he’ll do it alone. Marlena points out the devil could make John his next host. John shows her the St. Benedict medal around his neck, assuring her he’s safe. Marlena counters that together they’re stronger. She’s not leaving. Belle stirs and mumbles Johnny’s name.

More: Maggie’s request gets a big no from Anna 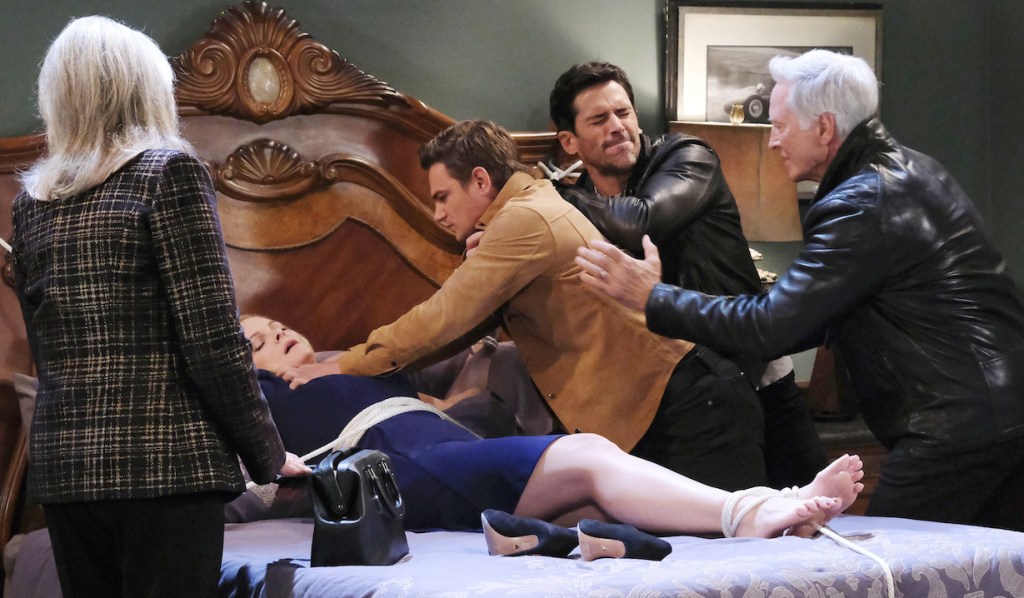 After “Johnny” calls Shawn, they burst into the room. Shawn leans down to Belle, as JoDevil discreetly touches her leg. Her yellow eyes fly open. Shawn recoils. BelleDevil forcefully sits up, still restrained by the ropes. After a few taunts, the devil says they turned into EJ and forced the kiss on Abigail. “Johnny” lunges at BelleDevil for turning his family against each other. Shawn and John pull him off. When John points out this is why he didn’t want anyone else in the room, “Johnny” gets an idea. He thinks if Shawn and Marlena hold on to John’s St. Benedict medal while he performs the exorcism, they’ll be protected too. Marlena calls it good thinking and “Johnny” leaves them to it. 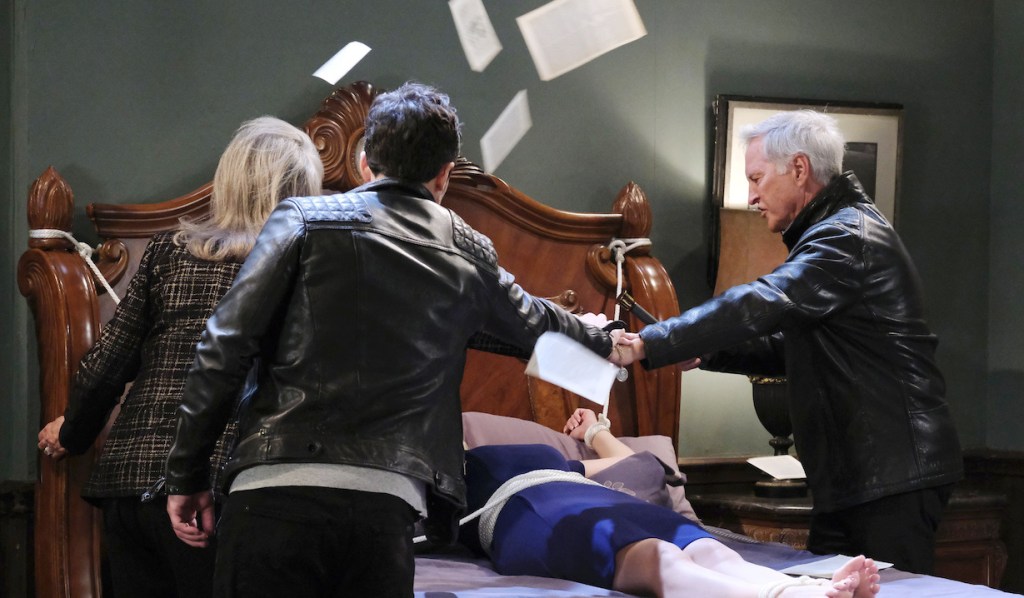 John holds the medal out over Belle’s body. Shawn and Marlena put their hands on top of it. In the hallway, JoDevil touches the door. Papers whip around Belle, as the bed rocks. When JoDevil removes his hand from the door, Belle’s bed stops rocking. Belle opens her eyes and calls for Shawn, wondering what happened. Marlena assures her she was sick but now she’s healed. The devil is gone forever. Shawn holds and kisses his wife, as JoDevil grins in the hallway. 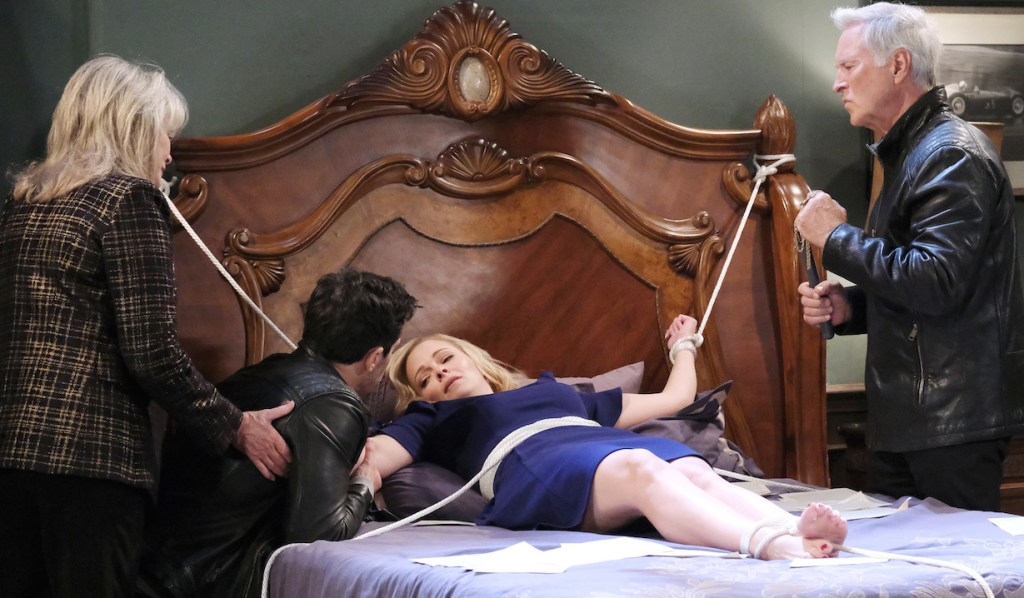 Next on Days of Our Lives: Chad gets clued in, and Shawn drops a bombshell on his wife.

Just about everyone is keeping a secret in Salem, but how do their efforts to keep them concealed compare to all of soaps’ most massive lies? 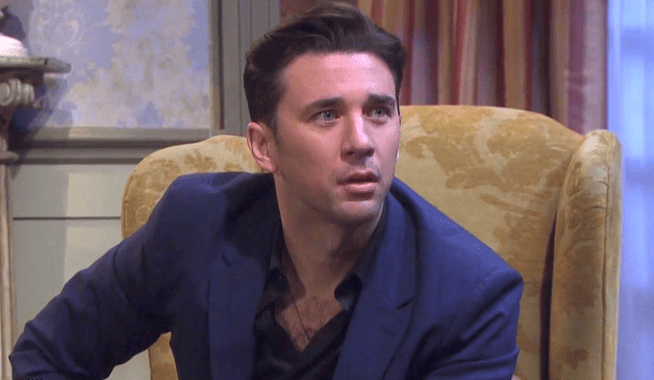 Chad Wants to Confess to Clear EJ’s Name, But Kate Suggests They Pin the Frame Up On [Spoiler] — Plus, EJ Remembers 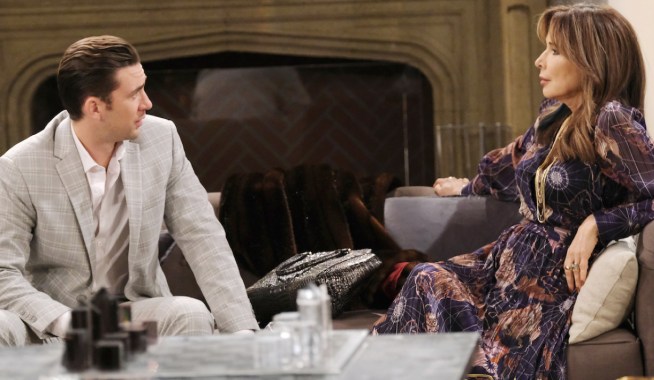