After Subduing Kristen, Steve and Kayla Rush To Warn the Others Their Food Has Been Drugged — But They’re Too Late!

Thursday, March 3, 2022: Today on Days of Our Lives, Steve and Kayla jump into action, Gwen panics upon hearing Xander's good news, and Anna issues a warning. 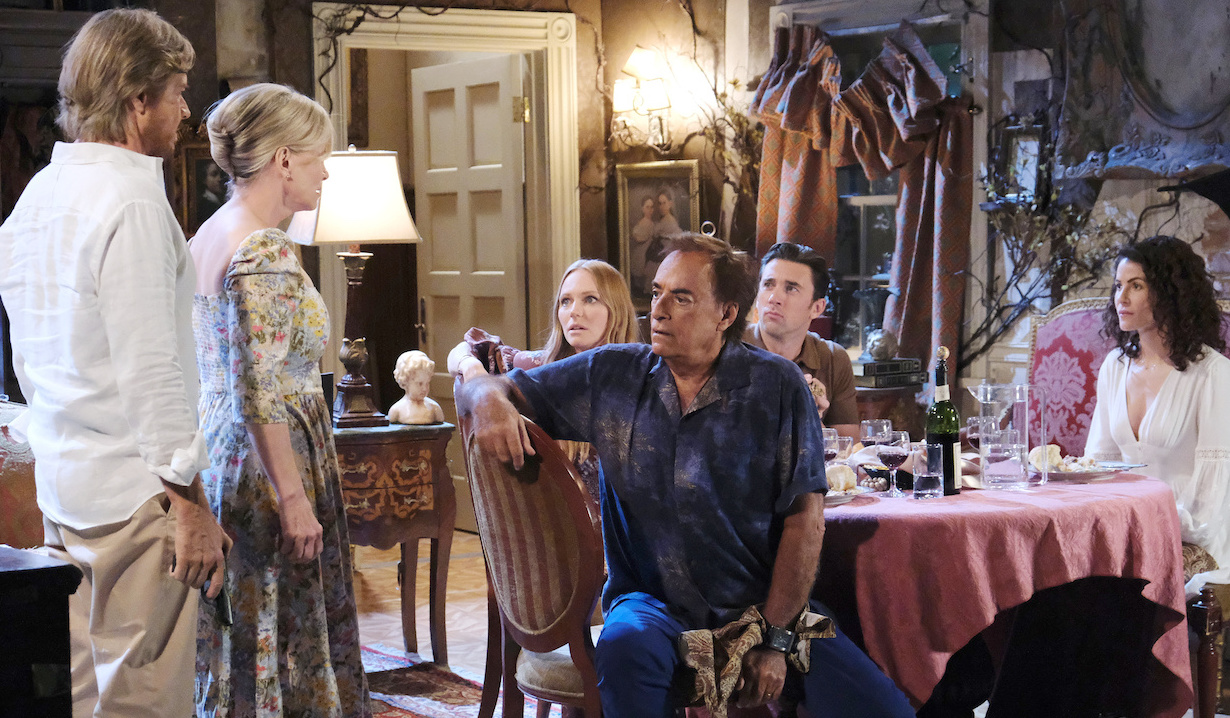 As Xander and Gwen canoodle in bed at the Salem Inn, she brings up their wedding. When they can’t decide on a venue, Xander says he’s asking Jack to be his best man. He suggests she ask Ava to be her maid of honor. Gwen shifts uncomfortably as she says they aren’t that close. She also nixes the idea of asking Jennifer. He plans to go ask Jack right now and asks her to come along. She thinks he should do it alone. 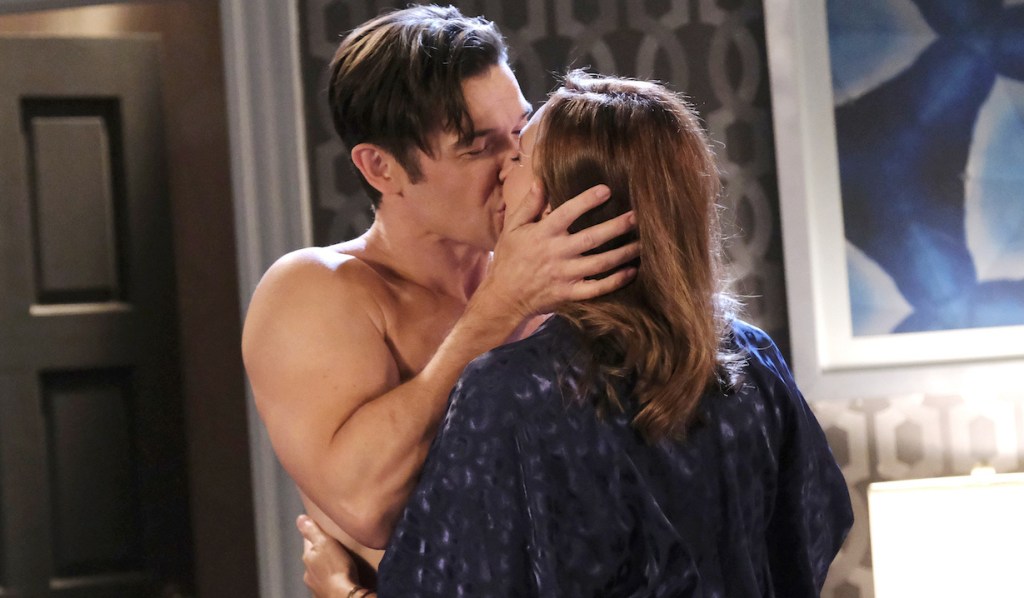 After Xander’s gone, Ava shows up. She needs to talk to Gwen about the possibility of Abigail coming home, considering she saw Ava in the Sarah mask. Gwen thinks Kristen will take care of everything, but Ava points out she has no loyalty to them. As they discuss it, Gwen shares that she Xander are engaged. Ava is happy for her, but bemoans all she has is revenge to keep her warm at night. She congratulates Gwen and leaves.

More: What will TR’s ex reveal when she hits Salem? 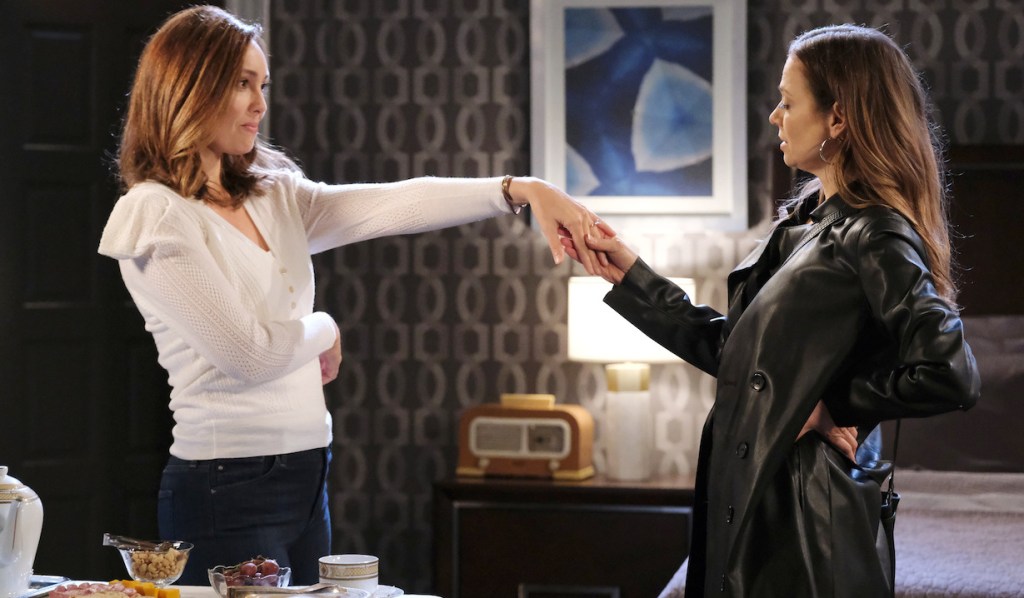 At home alone on Valentine’s Day, Anna opens a box of chocolates to stress eat, but finds all the chocolate-covered cherries gone. Distraught over Tony, she decides to go find some answers and leaves. 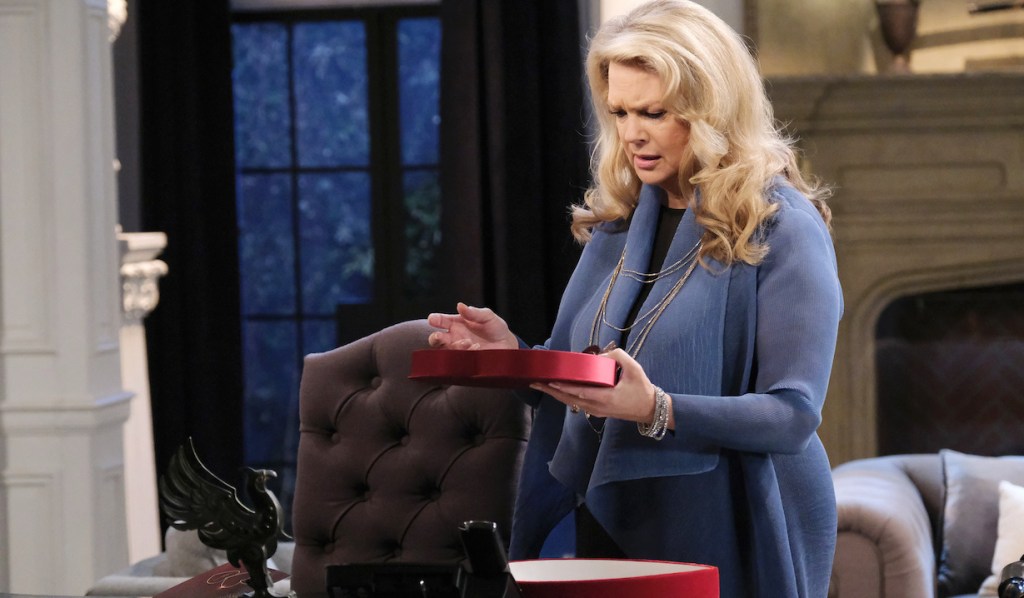 Jennifer bursts into the Horton House yelling for Jack. He calms her down, assuring her Chad and Tony found Abigail. As they discuss it, Anna bursts in, out of her mind with worry. They tell her Tony and Chad are on their way to get Abigail right now. When they mention the island they’re headed for, Anna recalls that Tony spent time there with his unstable ex-lover, Renee. 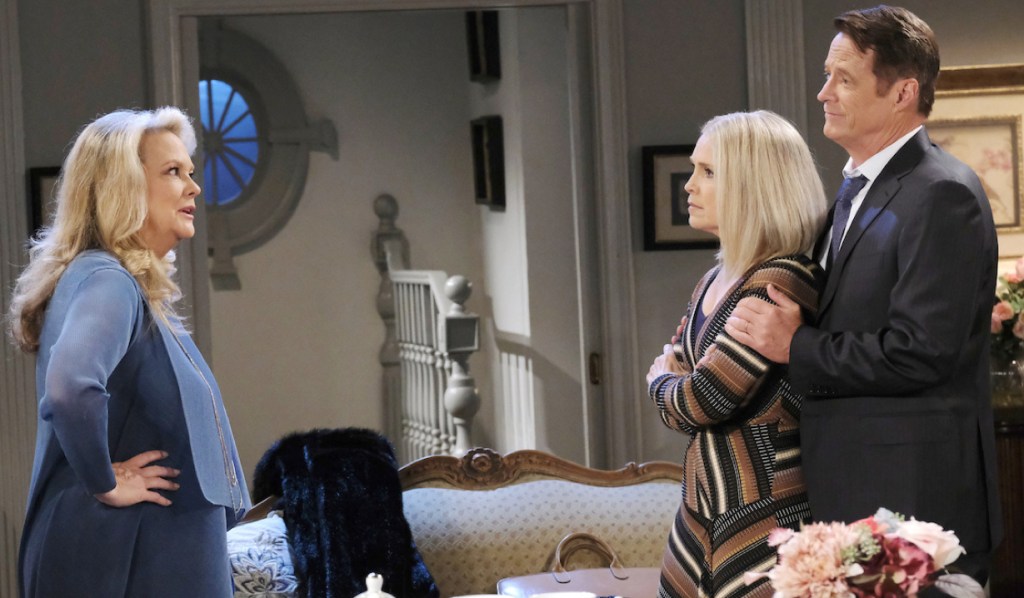 When Jack mentions he should tell Gwen the good news, Anna learns she’s engaged. Anna wonders what man would have the patience and fortitude to withstand her lying and deceit. Xander enters and says, “That man would be me.” He defends his fiancée when Anna freely expresses her disdain. Anna knows people can change, but suggests Xander be careful because you never know what a woman like that could still be hiding. Jack changes the subject by telling Xander that Abigail has been found. Xander is thrilled and knows Gwen will be as well. Anna narrows her eyes.

More: Is *this* Peacock’s next Days spinoff? 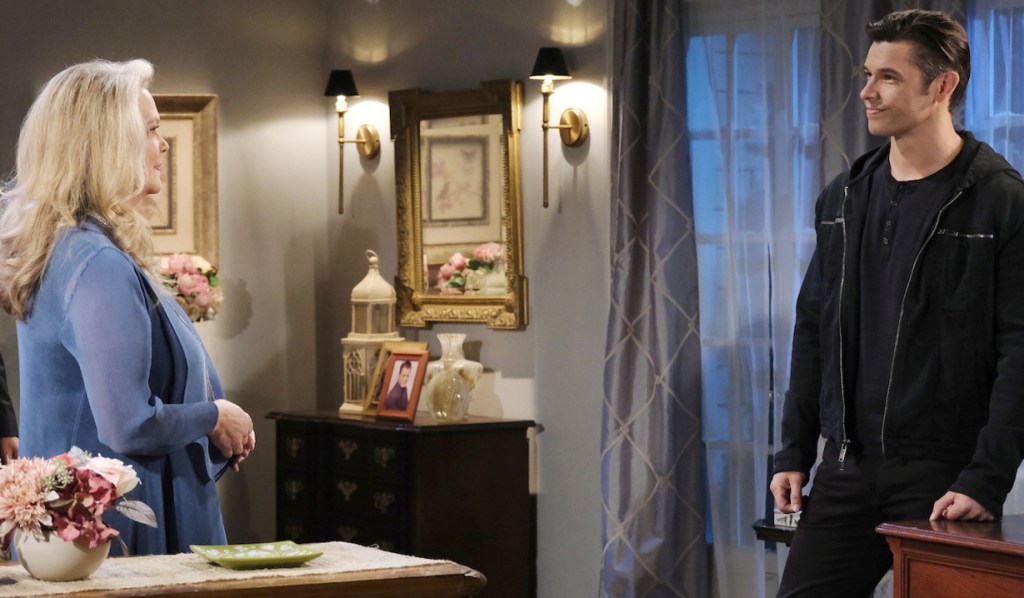 After Anna has left, Xander asks Jack to be his best mate at the wedding. Jack would be glad and happy to. They hug. After Xander leaves, Jack surprises Jennifer with roses and chocolates. They express their love. 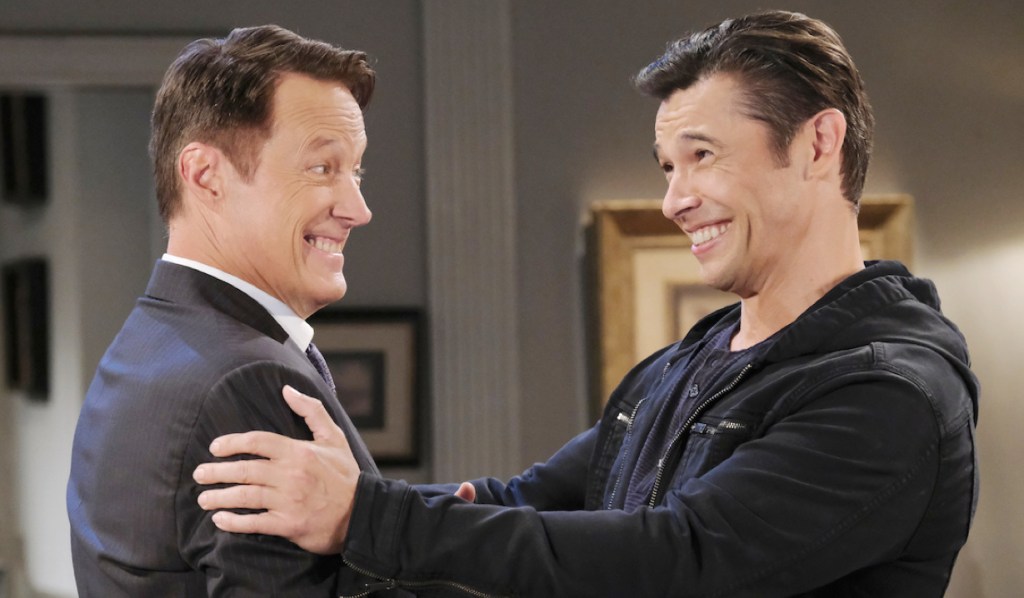 At the island mansion, Chad and Tony express confusion over Sarah calling Tony her love. Tony pushes her off, declaring he’s a happily married man. Chad’s eyes bulge as Sarah rants about Tony never getting over her. Tony realizes what’s happening and says, “Dear God,” as Abigail confirms Sarah thinks she’s Renee. Irritated that Tony doesn’t believe it, Sarah says they can talk about it on the way back to Salem. Chad smirks and says they’ll be right down. He and Tony exchange wild looks as Tony leaves the room with Sarah.

More: Sonny and Will team up with Chad 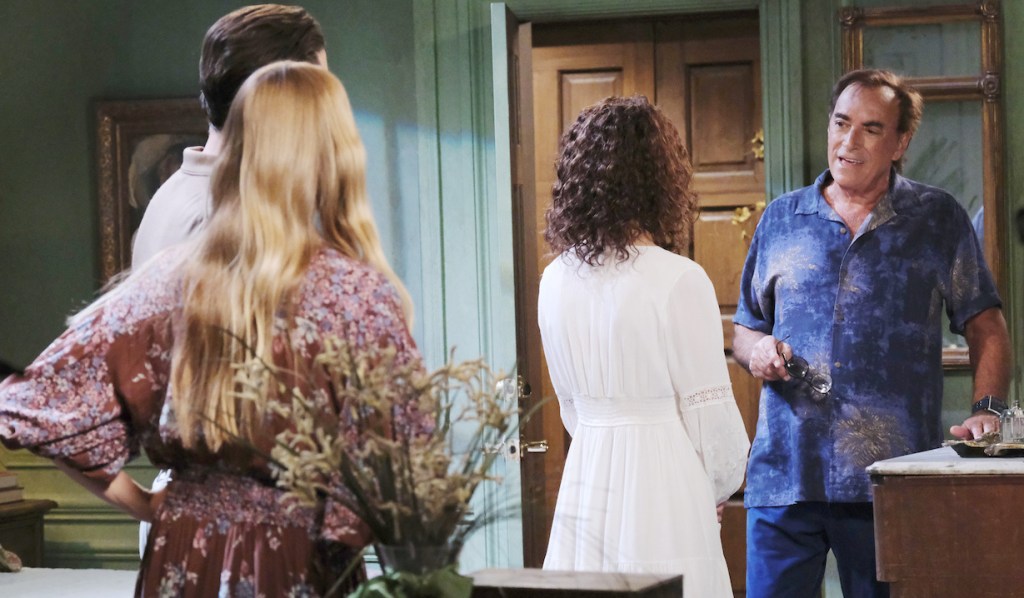 Alone, Abigail fills in the blanks for Chad about Sarah, and he explains how he found her. Abigail also tells him that Ava was wearing the Sarah mask. She’s the last face she saw before she got knocked out. She thinks they should find Steve and Kayla to see if they have any insights. They rush out.

Downstairs, Sarah tells Tony they have to stay for the dinner Kristen cooked for them. It’s her famous island chicken. She won’t take no for an answer. 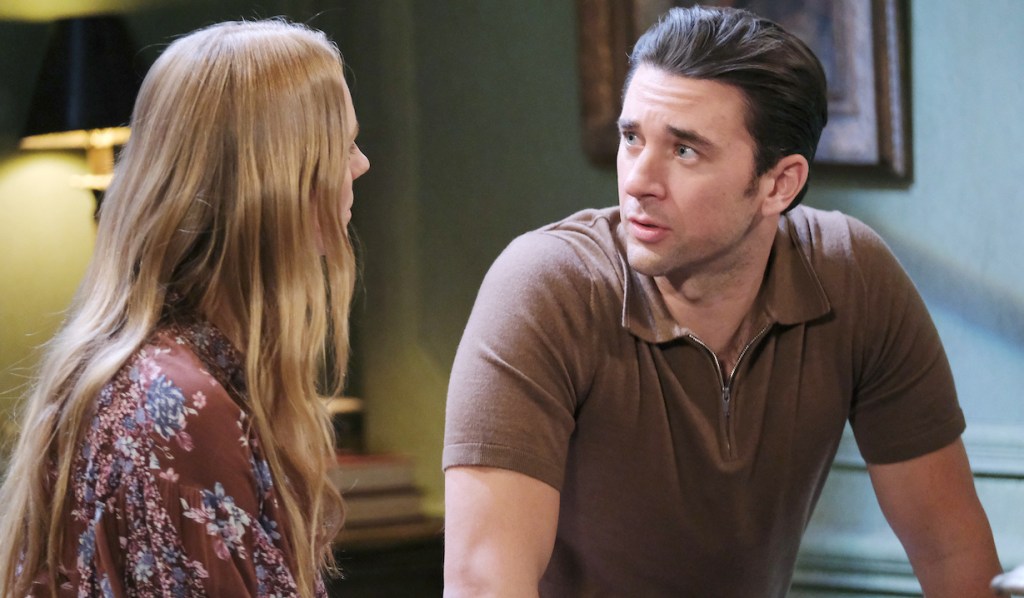 In the storage room, Kristen tells Kayla and Steve she didn’t give them a sedative, but something a little stronger. She hopes they enjoyed their anniversary because it could be their last. She tells them not to worry though. The drug won’t kill them. It will just give them amnesia. Steve rushes her and gets the upper hand. He ties Kristen to the chair as she suggests they remember their life together before it fades to black. Oh, and Sarah and Abigail will be dining on her island chicken tonight as well. By morning, no one will remember how to tie their own shoes. 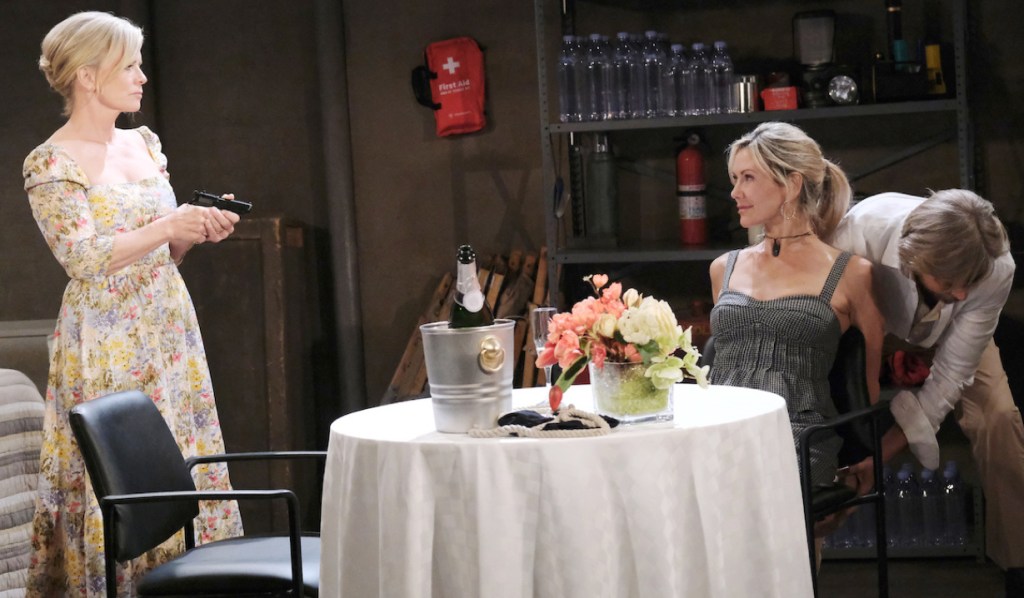 Abigail and Chad find Tony and Sarah at the table downstairs. They ask about Steve and Kayla. Sarah says if they want to see them, they need to eat dinner first. They reluctantly sit. Chad asks Abigail if there’s been any problems with the food. She tells him not so far, as Sarah yells at them to eat.

Later, Steve and Kayla rush in yelling for them not to eat the chicken. The Johnsons see the half-finished plates and exclaim, “It’s too late!” With a mouth full of chicken, Chad says, “What do you mean it’s too late?” Confusion erupts. Sarah shushes everyone by explaining she switched out the liquid in the dropper bottle she found in the kitchen. So, no one has been drugged.

As Chad vows to take Ava and her accomplice down, and Sarah tells Tony they’re getting him a divorce from Anna, Steve and Kayla discover Kristen has escaped the storage room. 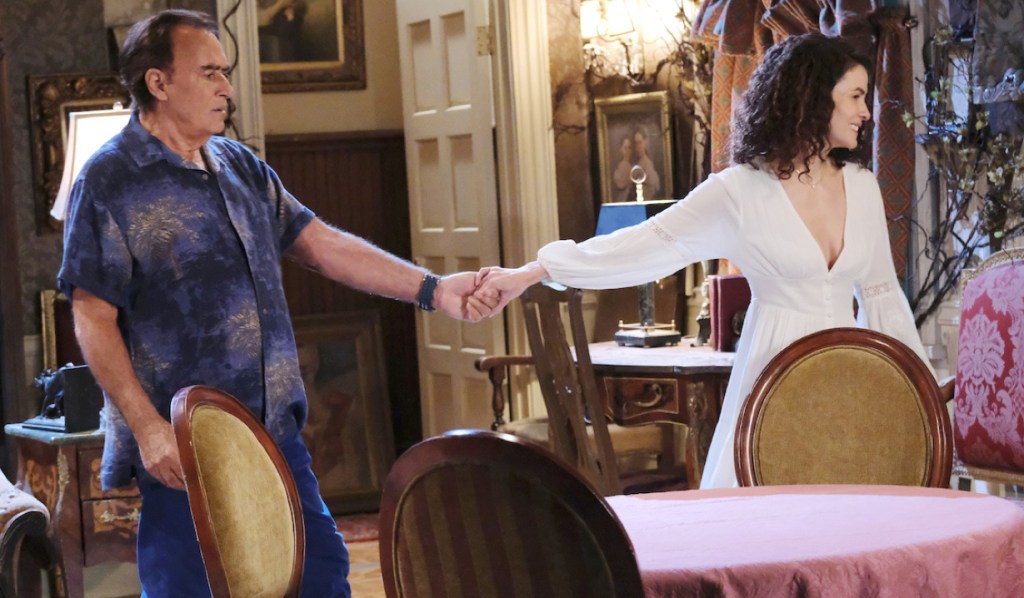 Next on Days of Our Lives: Chad wants answers from Ava, and Xander gets shocking news from Jack.

This latest ordeal is nothing for Chad and Abby. Relive “Chabby”‘s eventful relationship in our photo gallery below. 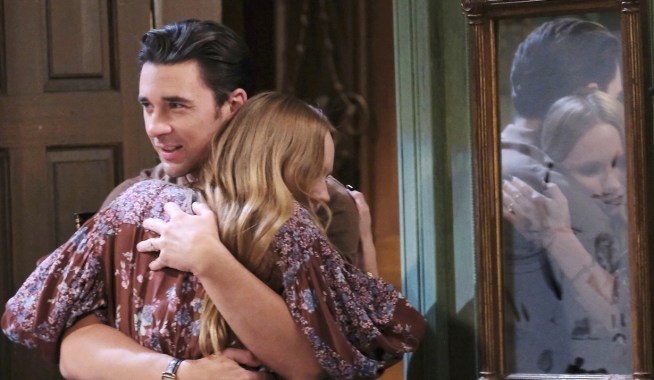 Kristen Gives Steve and Kayla More Than One Surprise On Their Anniversary, as Chad and Abigail Are Finally Reunited

After Learning the Truth (Well, Most of It) From Jack, Xander Races Out of the Salem Inn and Right Into Sarah 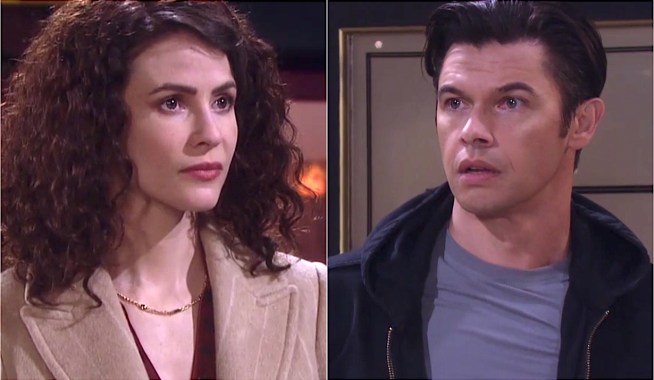