Monday, February 28, 2022: Today on Days of Our Lives, JoDevil throws a wrench in Tripp and Allie's happiness, Brady and Chloe are shocked upon meeting Craig's boyfriend, and Ciara and Ben turn to Susan for help. 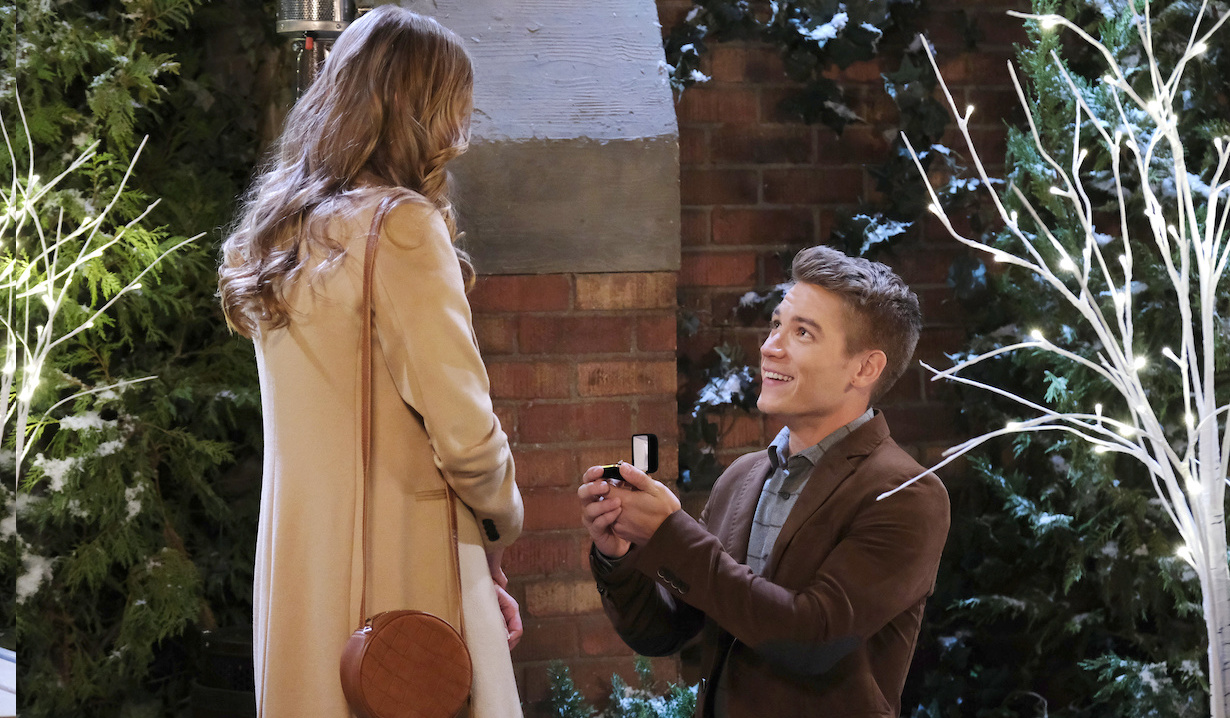 At their apartment, Ben and Ciara wonder if Johnny could really be possessed. Ben suggests they talk to Susan. Ciara agrees, but thinks she won’t be too happy when they accuse her grandson of being the devil. Ben says they don’t have a better idea. He calls and leaves a message. Ben promises Ciara if the devil is still in Salem, and after their baby, they will get through it together.

More: A race for Elizabeth’s affections in WCTH preview 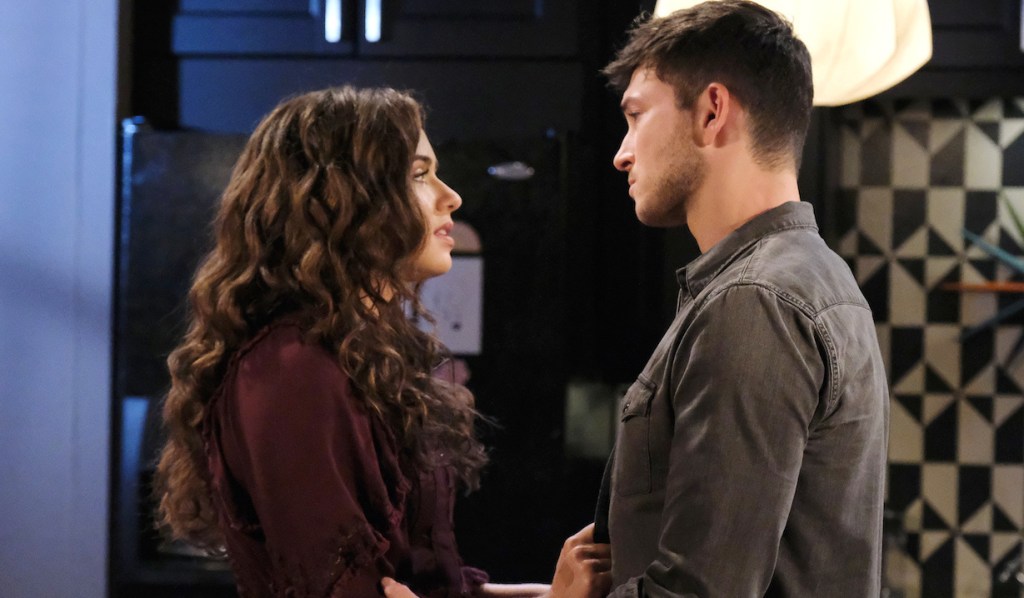 In Horton Square, Chanel asks Allie what she plans to say to Tripp when he proposes. Allie doesn’t know. She’s caught off guard. She asks Chanel if she thinks she’s ready for it. Chanel isn’t sure she’s the best person to be giving advice on marriage. Allie asks if she had doubts when Johnny proposed. Chanel didn’t. It felt right. Tripp texts Allie to meet. Chanel says no matter what Allie decides, she loves her. They hug. Both women look distressed as Chanel walks away.

More: Kevin and Sophie endgame on This Is Us? 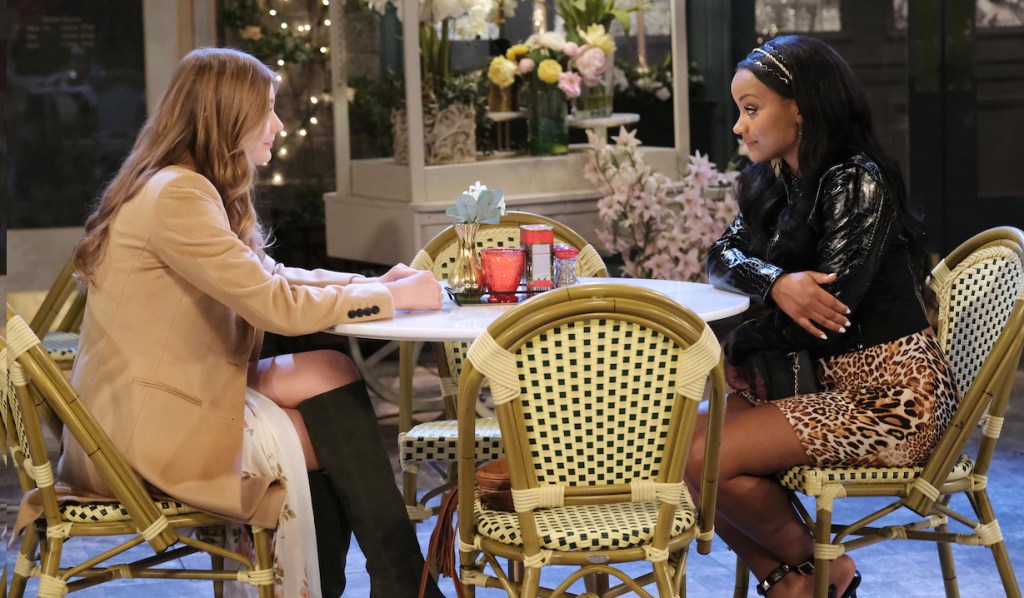 Craig comes upon Tripp setting up a romantic setting outdoors. Tripp explains he’s planning to propose to his girlfriend. Craig recalls when he asked Nancy to marry him, but they’re splitting up. Now, his daughter is supposed to meet his boyfriend, but he’s a nervous wreck about it. Craig apologizes for dumping all that on him. Tripp totally understands. Craig tells Tripp if he’s feeling nervous, it’s worth doing. He wishes him luck and leaves.

More: New realities could rise from tragedy on 9-1-1: Lone Star 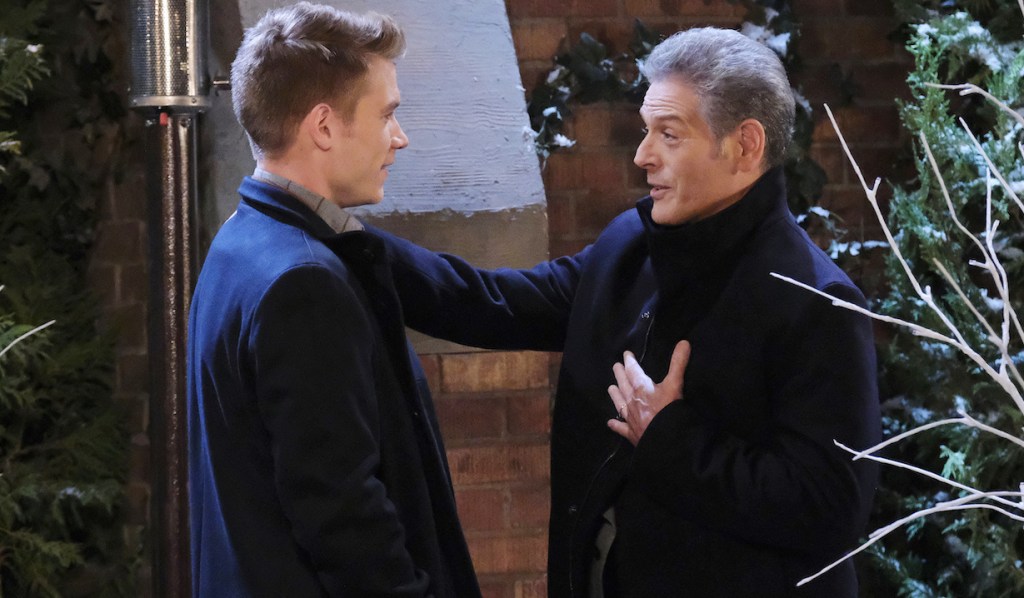 Brady arrives at The Bistro with a rose for a guarded Chloe. He assures her he just bought it off a kid selling them outside for a fundraiser. He knows it’s not a real Valentine’s Day date. Brady sits as she worries about meeting Craig’s new boyfriend. They move on to discussing Valentine’s Days past and recall the year they spent it in Vienna.

Craig shows up and sings his boyfriend’s praises to Chloe and Brady. He’s sure they’ll love him. He’s not sure what’s keeping him though. Chloe points out she doesn’t even know his name. Brady’s mouth drops as he says, “Leo Stark.” Craig wonders how Brady knows that, as Leo walks in and hugs Craig. 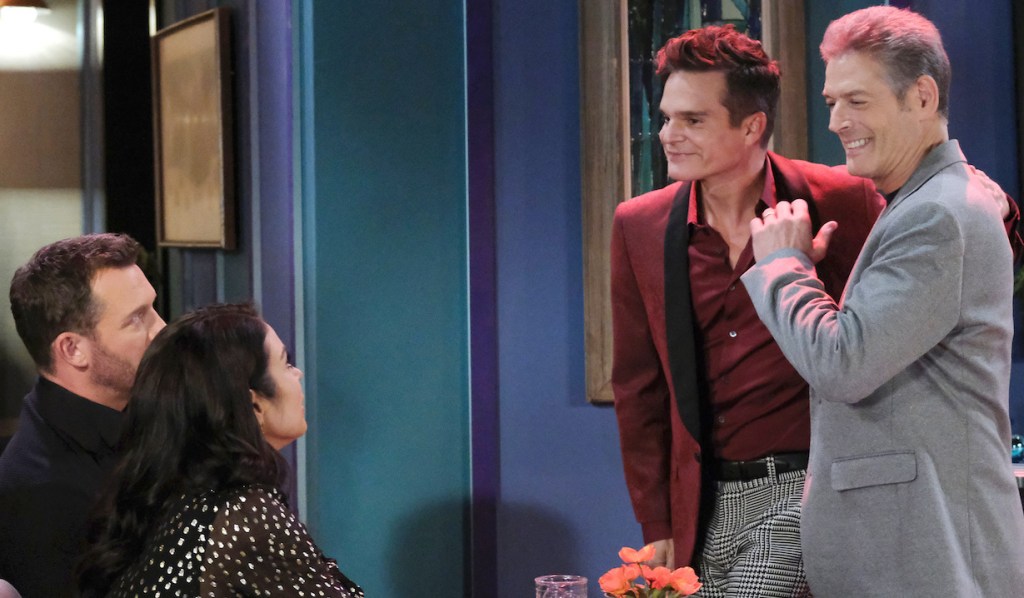 An impressed Allie arrives at Tripp’s outdoor picnic. They kiss. Tripp says he can’t wait any longer and pulls out a ring box. He gushes over how happy he’s been since meeting her. He wants to spend the rest of their days trying to make her as happy as she makes him. He wants to be a family with her and Henry. He gets on one knee and asks her to marry him. She immediately says, “Yes, Tripp. I’ll marry you.” 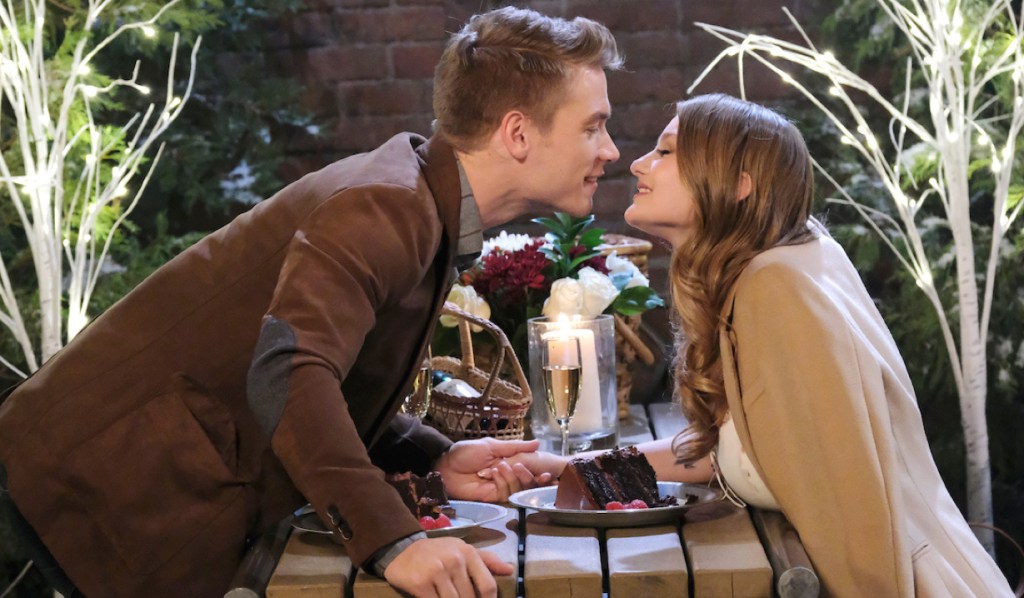 After plotting to screw Jake over, “Johnny” asks Gabi if she has Valentine’s Day plans. Gabi thinks they should just keep their minds on business right now. Undeterred, “Johnny” suggests they both deserve to have a little fun. He nuzzles her neck, but she’s not ready to go that far yet. She needs to get home and prepare for their meeting. After she leaves, JoDevil says he doesn’t like being rejected or left alone.

Jake pays Maggie a visit at the Kiriakis mansion, but she says she never texted him. She hasn’t seen her phone since yesterday. Jake rushes out. 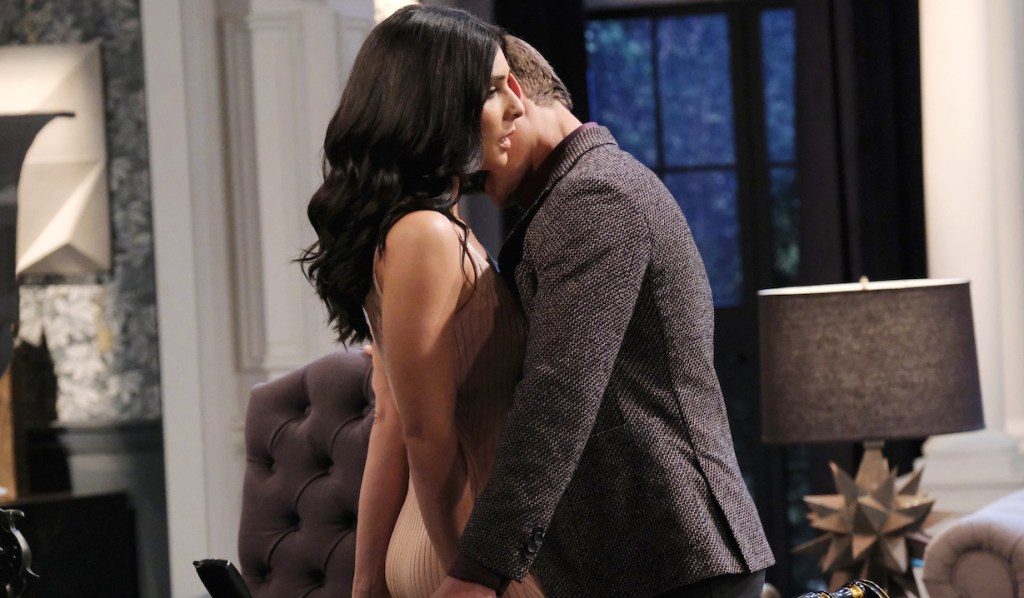 Jake and Gabi meet back at home. He tells her he thinks “Johnny” sent him the message from Maggie. She knows he doesn’t trust Johnny, but they just have to play along a little longer until they are CEOs. Jake wants to stop talking business and leans in for a kiss. She pulls away, blaming her worry over Rafe. She looks on her tablet and reads a report that Trask found Nicole trying to tamper with a witness. She pulls away again when Jake tries to comfort her. He wonders why she’s been acting so weird with him all day. She reminds him her brother is fighting for his life. He thinks it’s more personal than that. She insists they’re fine and stalks out.

Gabi enters the police station and flashes back to Jake waking her with a rose. She can’t believe he’s treating her like this. 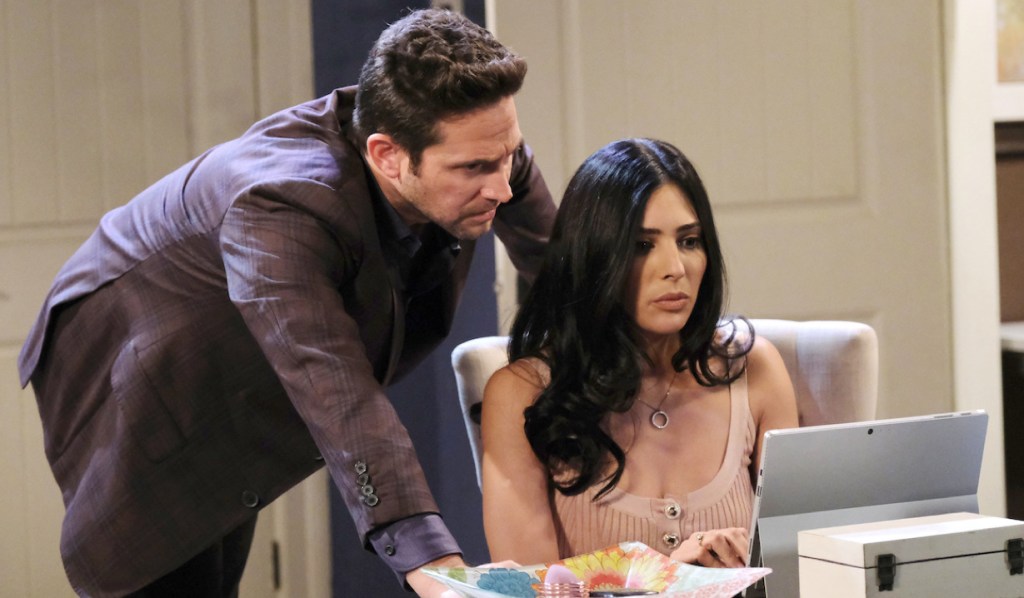 “Johnny” finds Chanel in the Square. He asks her out for her a drink. She’s aghast. He says just because they’re getting divorced it doesn’t mean the fun has to stop. Chanel explodes at him, but “Johnny” wonders if there’s some way they can figure things out without the lawyers — just the two of them. She tells him to follow her.

Chanel and “Johnny” come upon Tripp and Allie celebrating with chocolate cake. “Johnny” notes how romantic the scene is and asks what’s going on. They beam as they share their news. Chanel declares how happy she is for them, as her face falls. “Johnny,” in turn, wonders if Allie told Tripp that she “slept with my wife.” 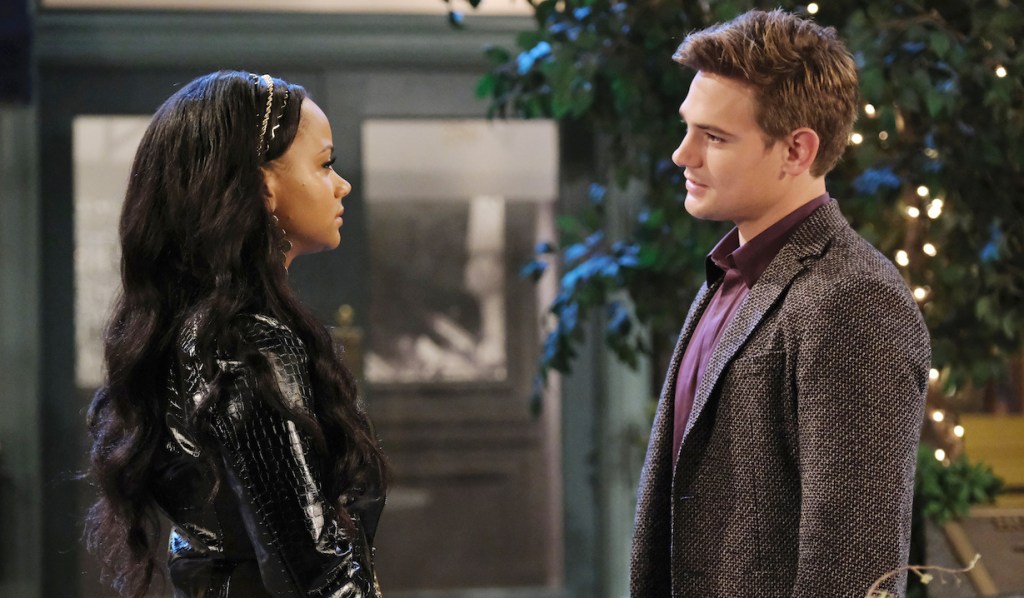 Next on Days of Our Lives: JoDevil causes trouble for Tripp, and Eli and Lani enjoy some romance.

After today’s bombshell, Tripp could find himself in good, yet, surprising company. Look through our photo gallery of other single soap opera characters looking for love. JoDevil Makes a Gruesome Threat When Attacked, While Craig Learns All About Leo's Past 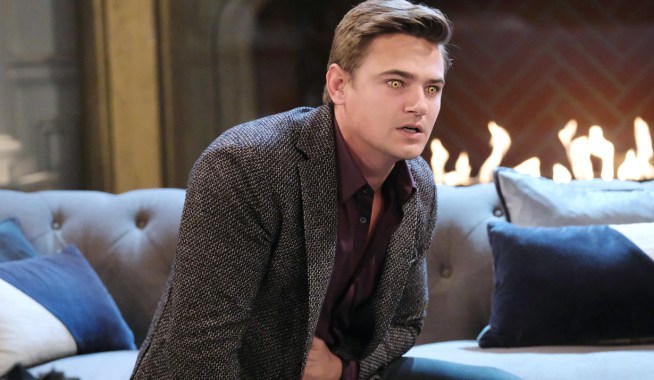