Eli Comes Home and Issues TR a Warning, as Paulina Calls Abe After a Chilling Encounter With Her Ex

Wednesday, February 23, 2022: Today on Days of Our Lives, Eli comes home, Lani does some digging, Abigail gets filled in on Renee DuMonde, and Steve and Kayla face Kristen. 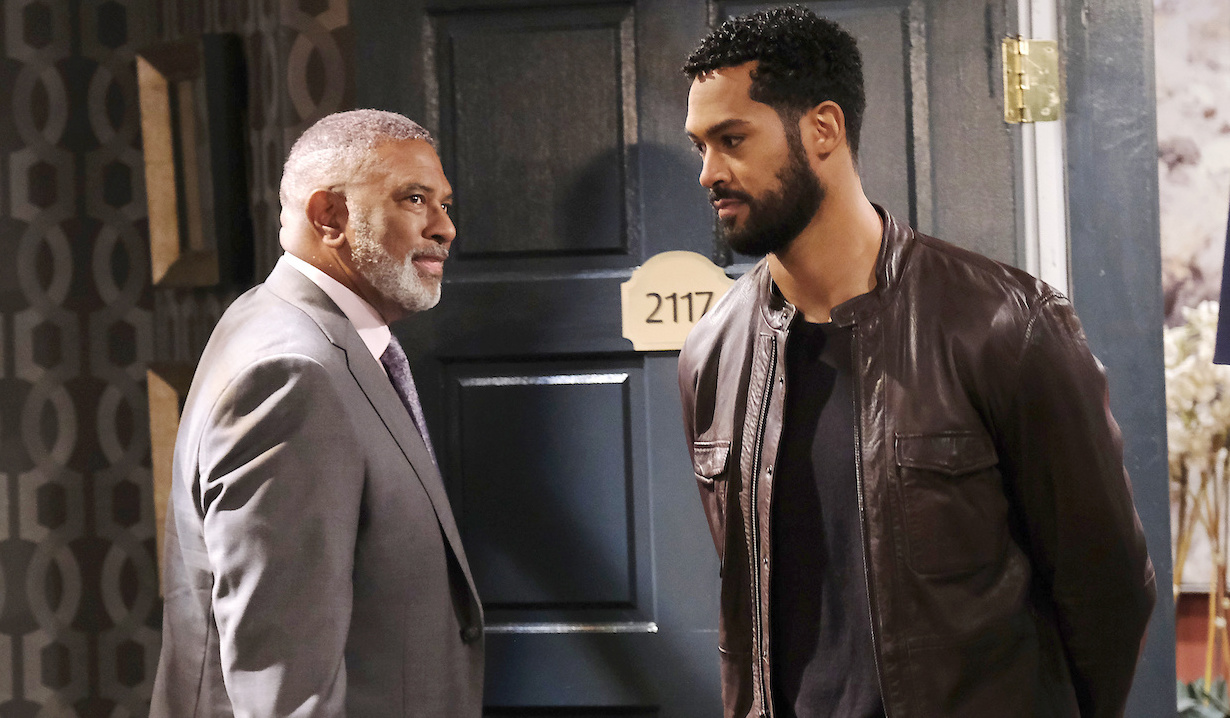 At the island mansion, Abigail questions Kristen about who Sarah is pining over, if not Xander. Kristen grins as she says, Tony DiMera. She explains she gave a very confused Sarah a bunch of books to read when she first got to the island. One of those books was Kristen’s late sister, Renee’s diary. When she finished, Sarah was convinced she was Renee. Kristen needs to find her now though to make sure she doesn’t hurt herself. Kristen hands Abigail Renee’s diary to keep herself occupied while she goes to search.

Alone, Abigail reads Renee’s words aloud about not wanting to be married to David (Eli’s father) anymore and wanting to get Anna out of Tony’s life — permanently. 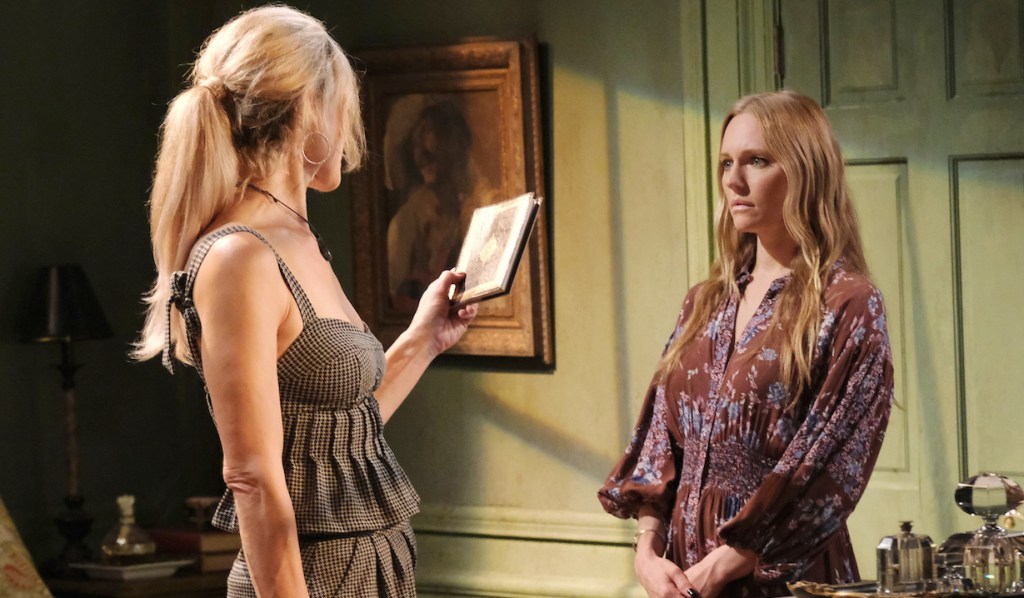 In the storage room, Kayla tells Sarah she can’t be Renee because Renee is dead. Sarah scoffs, insisting she is the very much alive Renee DuMonde. Kayla explains to a confused Steve that Renee was killed by the Salem Slasher, a.k.a, Andre DiMera. They can’t understand why Sarah thinks she’s Renee, but agree to humor her for the moment.

As Sarah rattles on about Tony, Anna, and Chris Kositchek being the Salem Slasher, Steve raises an eyebrow at Kayla. She whispers, “Later,” to him and gently tells Sarah that Tony is married to Anna. Sarah says he’ll have to annul his marriage so they can have a lavish wedding. However, Kristen won’t let her leave the island. Steve promises he won’t let Kristen stop them from leaving. 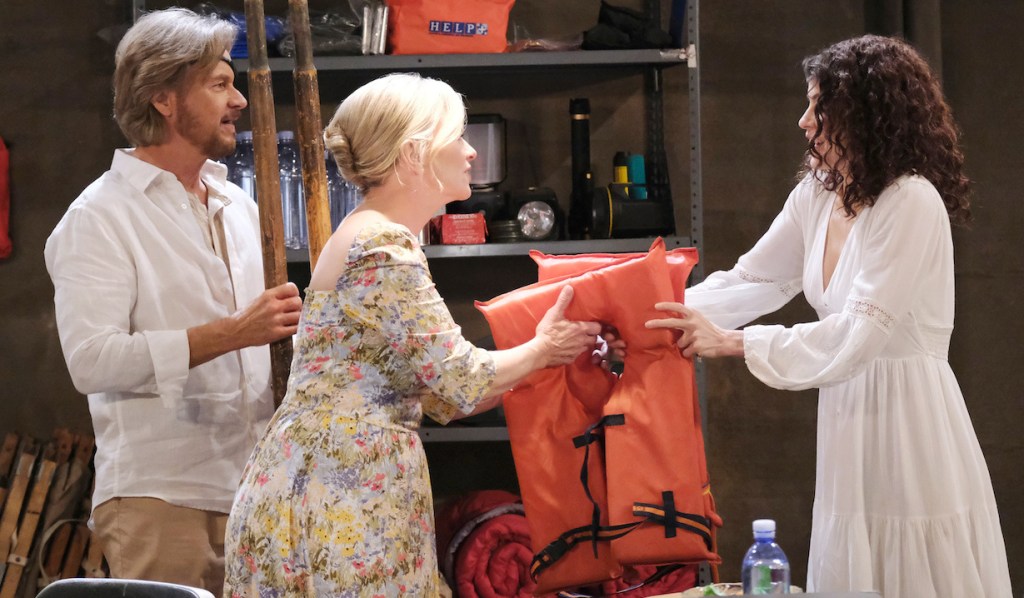 Steve and Kayla hold flare guns as they enter the mansion with Sarah. Kristen joins them. Steve and Kayla aim the guns at her, demanding answers. Kristen taunts them about holding Abigail there.

At home, Lani searches TR’s name online. She learns he’s a “Hollywood heavyweight,” as Eli comes home. She greets her husband with a kiss and then updates him on TR. Eli says he would have come home immediately, but Lani wanted to tell him in person. Besides, nothing happened and she’s fine. Eli notes she seems shaky. She lies in his arms on the couch, as she admits she’s curious about her father. Eli knows all too well why she’d want to know about her dad. Lani points out his father, David, didn’t abuse his mother. TR beat hers on a regular basis and now he wants to be a part of her life. What is she supposed to do?

Paulina calls Eli and Lani’s building from home to try and ensure TR is banned from entering. They hang up on her. TR comes to her door. She tries to shut it on him, but he blocks it with his foot. He vows he’s changed and just wants to talk. She reluctantly lets him in. He wants to talk about Lani, but Paulina tells him he has no rights to her. She orders him out. His face hardens as he says, “We will be seeing each other again.” Paulina calls someone after he leaves. She says, “I need to see you right away. It’s an emergency.”

Abe comes over and learns that TR is in town and already introduced himself to Lani. Abe wants to go check on her and asks if Paulina will be okay alone. Paulina picks up a bat and says she’s a survivor.

When Abe arrives, Eli leaves to see Doug and Julie. Once he’s gone, Abe asks Lani how she’s doing. She admits TR’s presence threw her for a loop. He understands why she’d want to know more about him, but urges her to be careful. Lani insists Abe is her father and always will be. As they hug, Lani eyes the article about TR on her tablet. 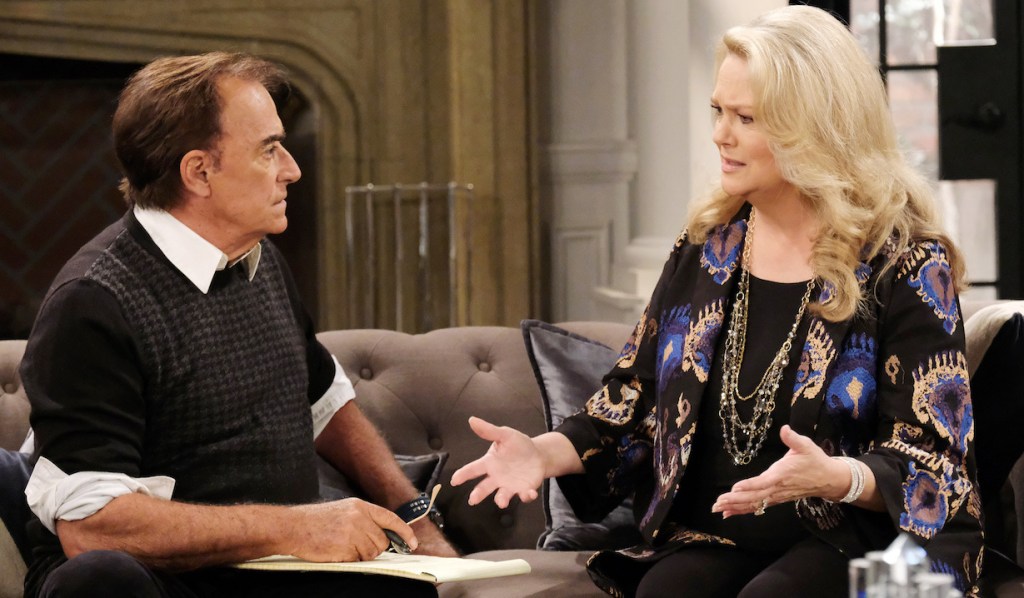 More: Could the EJ/Sami/Lucas triangle end for good?

In the DiMera mansion, Tony fills Anna in on his and Chad’s search for Abigail. After he leaves, TR rings the doorbell. He introduces himself as Johnny’s movie producer. She eagerly invites him in. As they sit and talk, Anna tells him she’s perfect to play Kristen in the film. He reminds her the movie is set twenty years ago. Anna thinks they can just use a filter or petroleum jelly. TR has another actress in mind for the part, but he will keep her in mind for his other projects. Anna suggests a sequel to Possessed. A film about her and Tony and how Renee DuMonde tried to ruin her life. TR looks at his watch as Anna details their story. He tells her to write him a treatment and then they’ll talk. When Anna mentions she has a daughter, he shares that he does too, but her mother is keeping them apart. Anna tells him to fight like a tiger to be in her life. 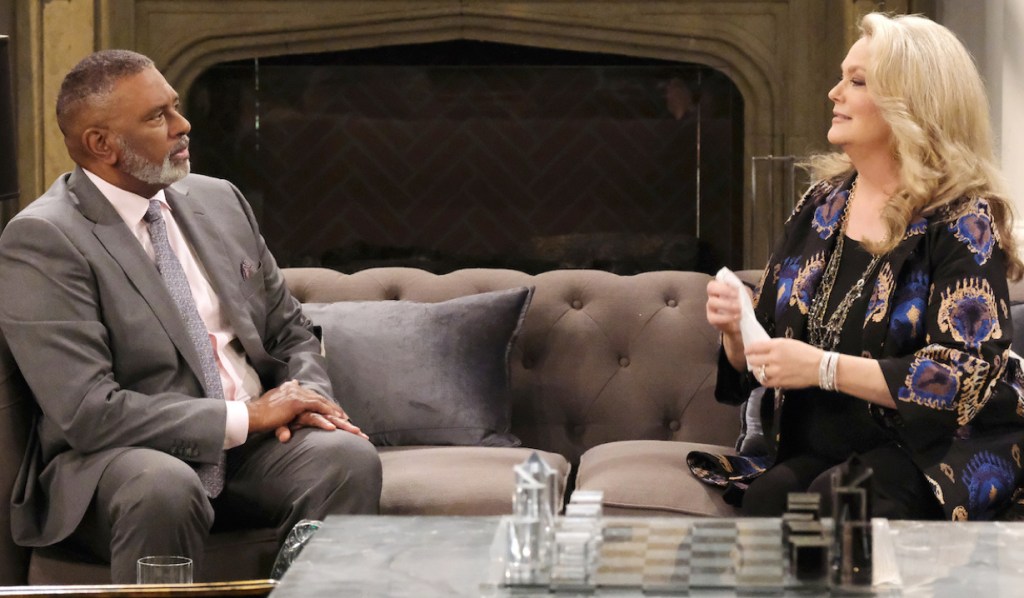 After TR has left, Anna sits in front of a blank page on a tablet. She doesn’t even know what a treatment is. She tries to channel Nora Ephron and starts typing. She starts writing about a fight she and Tony had her about her sleeping with Andre when she thought he was Tony. She becomes emotional and wonders what she should wear to the Oscars.

More: Why William Christian almost turned down the role of TR

TR returns to his Salem Inn room. He thinks Anna is right and he shouldn’t stop trying to get through to Lani. Eli knocks on the door and flashes his badge when TR opens it. TR invites him in when he realizes he’s Lani’s husband. Eli lets him know that while Lani can handle herself, if he messes with any of the Price women, TR will have to answer to him.

Next on Days of Our Lives: Nancy seeks out Marlena, and Chloe makes a request of Brady.

Continue today’s history lesson on Tony DiMera with our photo gallery below. 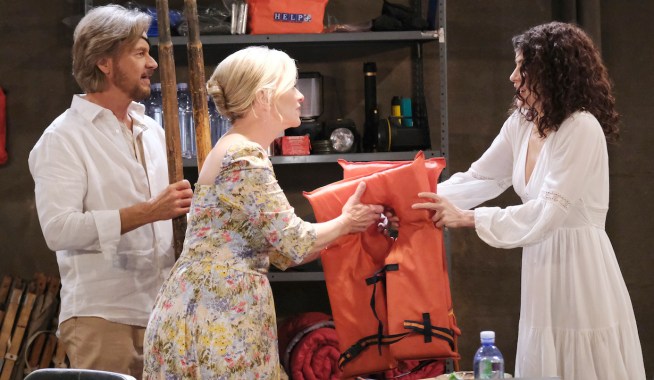 Sarah Declares She's In Love With Tony DiMera, as EJ Reveals His Hazy Memory To Clyde

Valentine's Day Takes a Bittersweet Turn as Nicole, Rafe and Ava Face Off and Gabi Trades Jake's Chocolates for Johnny's 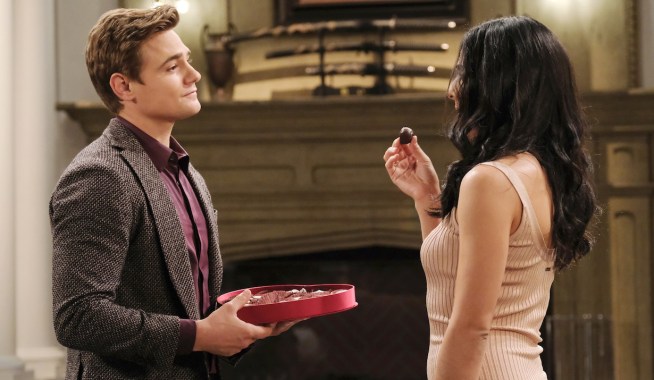