Ava Battles a Life-Sized Duke, While Gwen’s Literal Nightmare Turns Into a Reality

Tuesday, January 18, 2022: Today on Days of Our Lives, Nightmares and fantasies plague Salemites, Kayla gets flustered around Father Nichols, and Abigail gets a lead on Sarah. 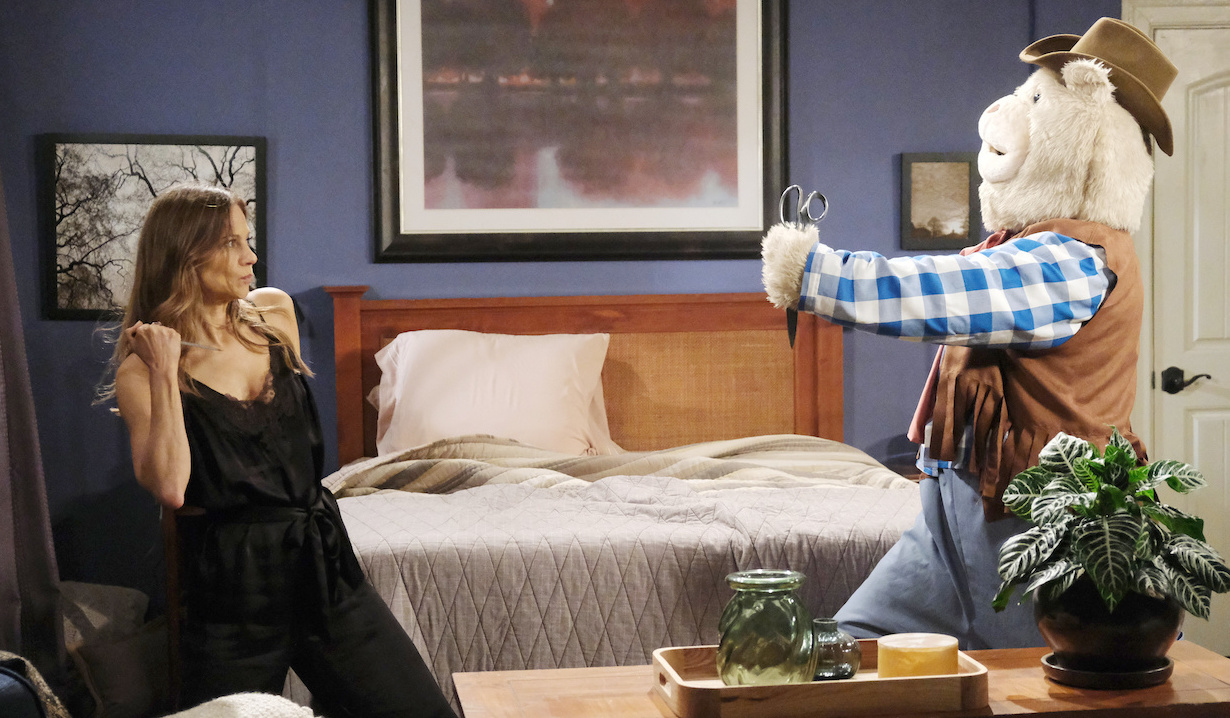 After breathtaking sex, Xander jumps in the shower, while Gwen answers the door… to Sarah. Xander exits the bathroom and Sarah runs into his arms. They eagerly make out. Gwen opens her eyes, panting on the bed to see Xander standing over her. He asks what’s wrong. She says she had a nightmare, but she doesn’t remember what it was about. They start to kiss, as someone knocks on the door. Gwen reluctantly opens it to Abigail. Gwen says they’re busy, but Xander runs over. Abigail tells him she found the pilot, Ned. They’re meeting at the pub in a half hour. Gwen thinks it’s a waste of time, but Xander dashes off to get dressed. 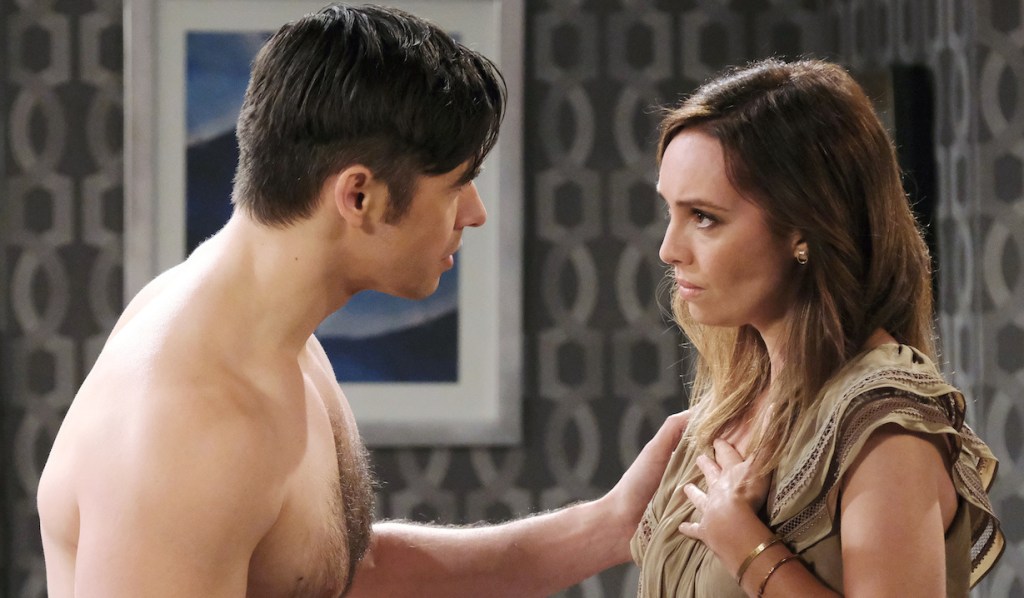 Alone with Abigail, Gwen accuses her of trying to get Xander to leave her. Abigail wonders why Gwen would even care if Sarah’s found, considering she believes Sarah left Xander of her own free will. They bicker until Xander returns dressed. He leaves with Abby.

At John and Marlena’s, Brady opens the door to Kristen. She says he cut out her heart, and now, she’ll cut out his. She lowers a knife toward him. Brady wakes up, holding his chest.

Meanwhile, Nicole thinks about having sex with Rafe at Basic Black. He comes to the office and they make out on the table. She wakes up on her couch at home.

More: Will a Chicago Med crisis bring [Spoiler] together? 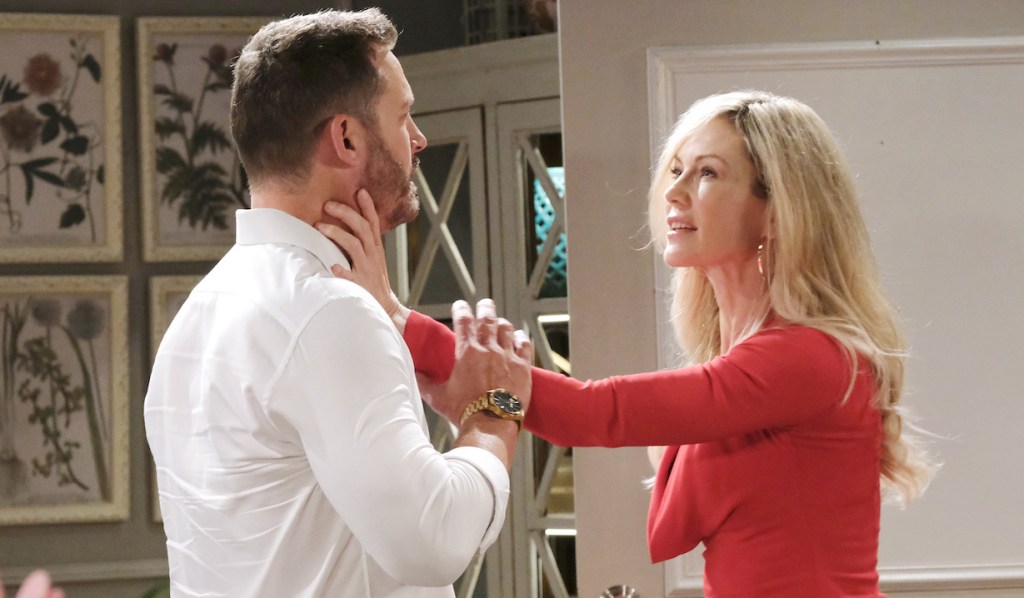 Later at work, Brady walks in to find a daydreaming Nicole. Brady assumes she was thinking about having sex with Rafe on the table. Nicole can’t believe Chloe told him, but mostly blames Marlena for bringing Deimos back from the dead. That is not where Brady thought the story was going, but Nicole explains it’s what led to sex with Rafe. He asks if she wants to be with him. She doesn’t know, but she can’t stop thinking about him. In fact, she had a dream about him. Brady understands because he dreamt about Kristen. He tells her Steve has a lead in Italy, but he hasn’t found her yet. When they talk about Rafe again, Nicole says she needs to get him out of her head. 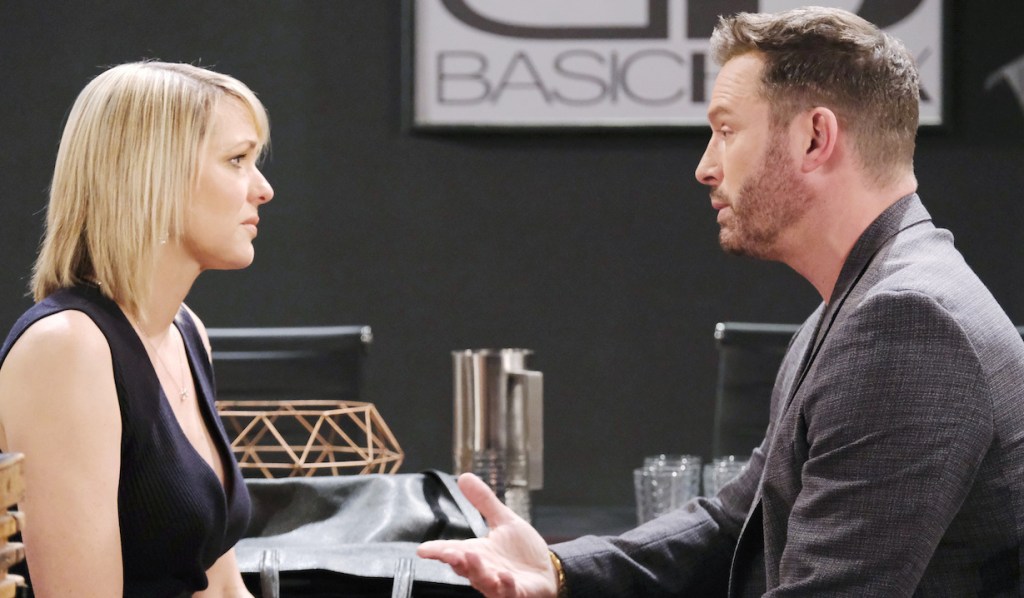 In bed, Ava discovers Rafe is gone. A life-sized Duke stands in the doorway. He holds a pair of scissors and says he’s there for payback. Ava screams. She grabs a sharp nail file and tries to run, but he grabs her. She bites him. He says she’ll pay for that. She jolts up in bed gripping the nail file. Rafe appears with coffee and a bear claw. Ava sticks with just the coffee.

Rafe tells Ava about the bogus accusations against him at work. She wonders who would do that to him. He has some ideas. Ava asks if he thinks it was her, considering he accused her of ripping up Duke. He believes she didn’t do that. Ava wonders why she would even be upset with him and Nicole. They are the people she trusts most in the world. No matter what happens, she will always believe in him.

More: Is Tai more unhinged than Misty on Yellowjackets? 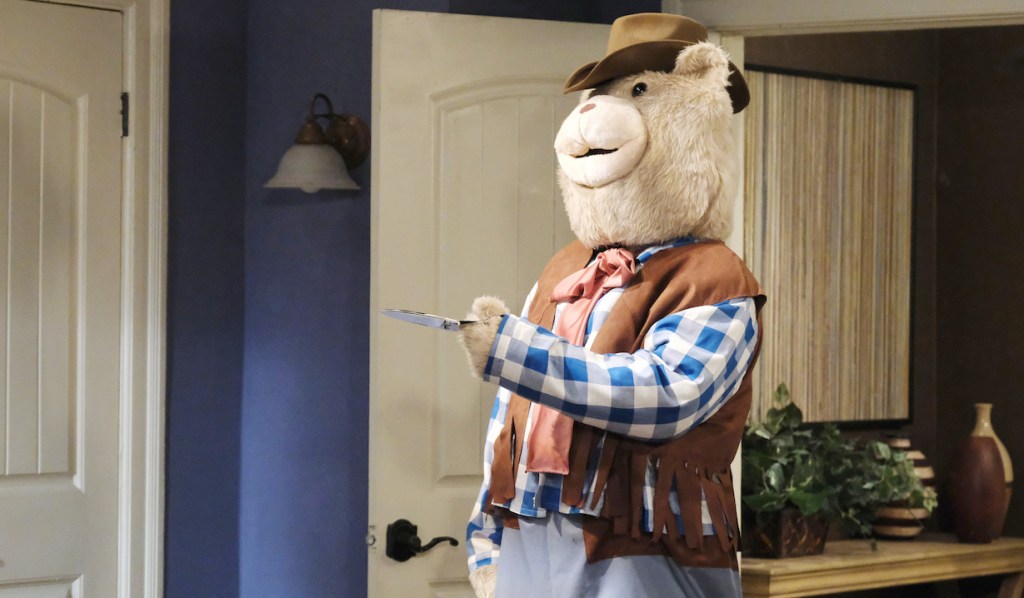 Ava and Rafe have sex, which he calls inspired. He dresses, but she tries to entice him to stay. He can’t, but tells her there’s a package downstairs for her. She hopes he finds who is trying to hurt him. She adds that the truth always comes out.

Alone at Basic Black, Nicole continues thinking of Rafe. Frustrated, she tries unsuccessfully to drag the conference table out of the room. Rafe appears and says, “Need a hand?”

In their hotel room, Kayla walks out of the bathroom in her nun’s habit. She tells “Father Nichols” she’s been having impure thoughts and pulls him into a passionate kiss. Kayla startles awake from a nap. She tells Steve her cacio e pepe gave her spicy dreams. Steve tells her the Mother called and said there’s room for her at the convent. He suggests she get back into her habit, but Kayla gets flustered.

Alone in the room, Kayla tells herself to stop having impure thoughts. Steve walks out in his collar. Kayla catches her breath and says, “Oh dear, God.” He expresses his worry about Kristen hurting her and quotes a Bible verse, which impresses “Sister Mary Elizabeth”. Kayla assures him she’s not afraid of Kristen after locking horns and lips with the devil. 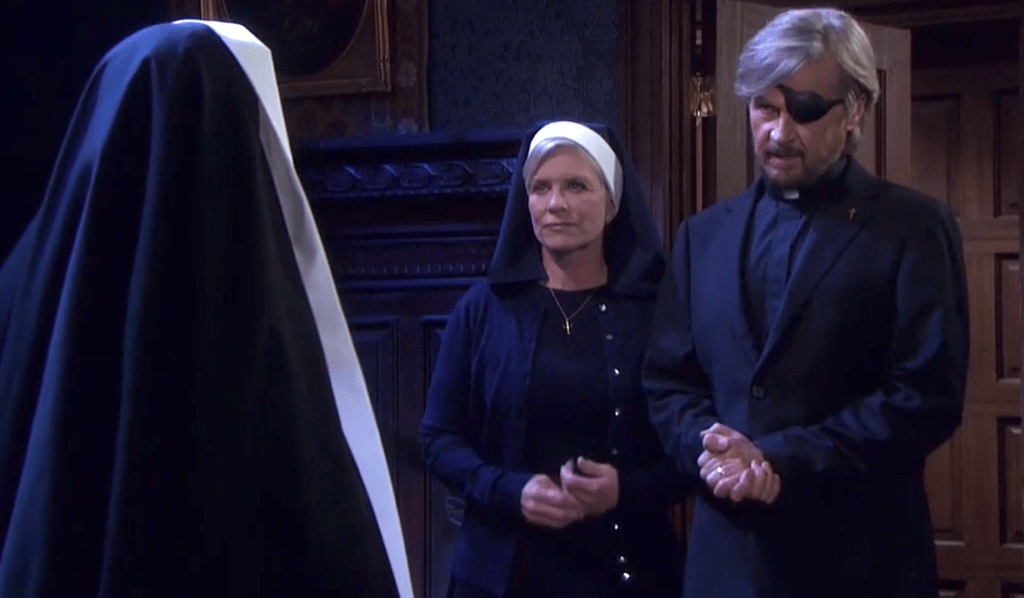 At the convent, the Mother tells Kristen that Sister Mary Elizabeth will be staying with them. Kristen secretly reveals a gun hidden inside a bible.

When Steve and Kayla arrive at the convent, the Reverend Mother tells Steve he can’t stay. He tells Kayla to stay safe and signs, “I love you” as the Mother leads him out.

As someone in a nun’s habit catches Kayla snooping in the convent, Kristen shows up in the hotel room and holds a gun on Steve. 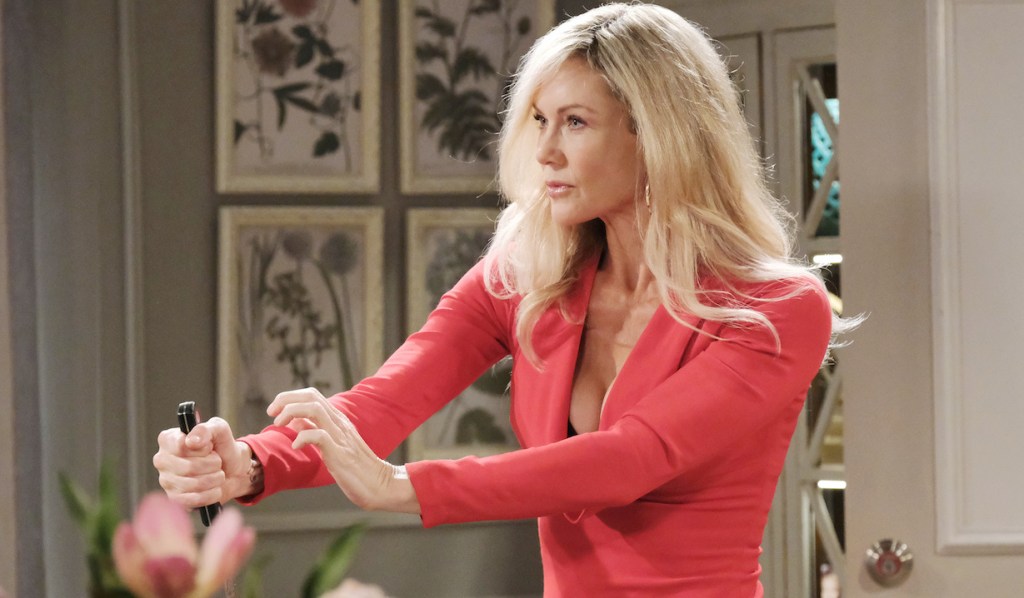 At the Pub, the pilot, Ned joins Abigail and Xander. Abby shows him Sarah’s photo and asks if he flew her out of Salem.

From the Salem Inn, Gwen urgently leaves Ava a message for help. There’s a knock at the door. She opens it to… Sarah.

Next on Days of Our Lives: Gwen’s nightmare continues.

On the 40th anniversary of his first appearance on Days of Our Lives, we relive the villainous reign of the Phoenix himself, Stefano DiMera in the photo gallery below. 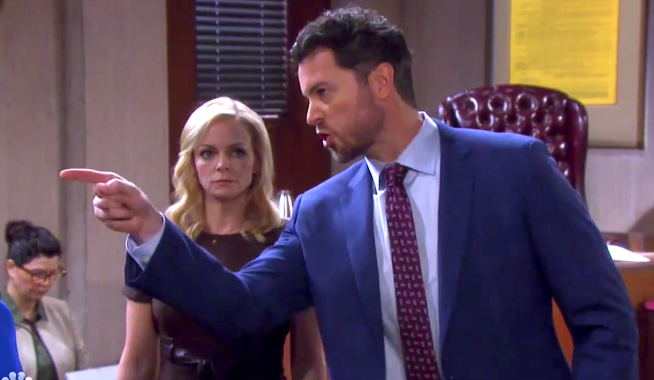 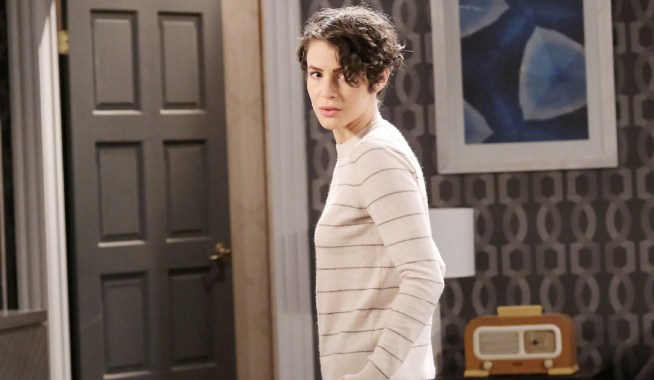