Paulina Witnesses Chanel Moving On, While Susan Leaves EJ in a State of Confusion

Tuesday, January 11, 2022: Today on Days of Our Lives, Chanel doesn't want to be alone, JoDevil sends Susan away, and Ben and Ciara debate getting answers. At home, Ben and Ciara stare at an envelope, debating whether or not to open it. Shawn stops by. They explain they had a sonogram appointment today, but they can’t decide if they want to know the sex of their baby or not. Shawn takes the envelope and suggests they open it to find out. They pass. In fact, Ciara asks Shawn to take the envelope so they aren’t tempted to open it. 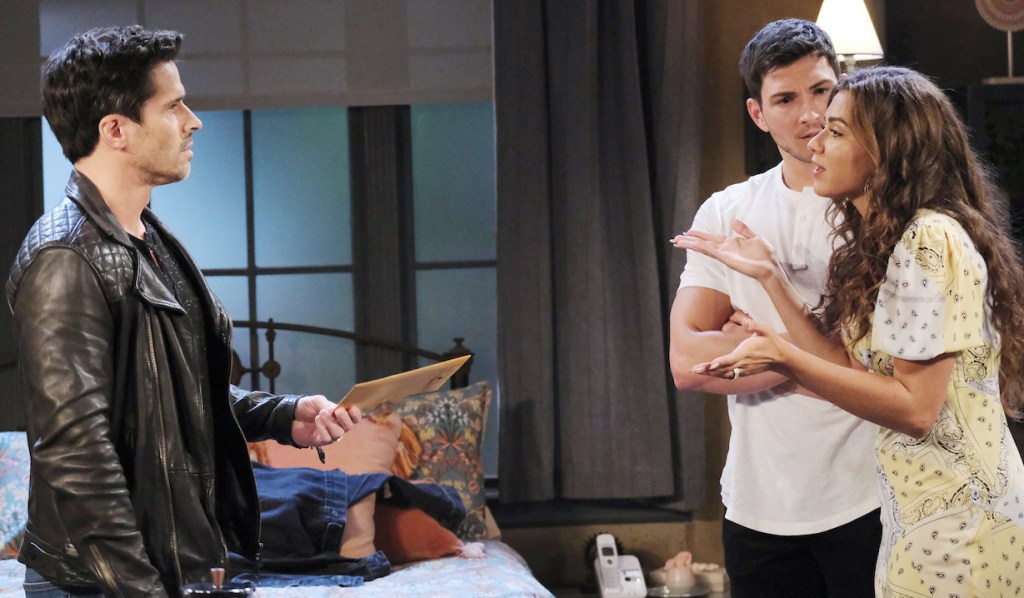 At the hospital, Paulina points out Lani called her “Mom,” when the chandelier fell. She asks why, but Tripp’s presence interrupts them. They tell him what happened at the wedding reception. Tripp leaves to order an x-ray for Paulina’s ankle and to call Allie about Chanel. 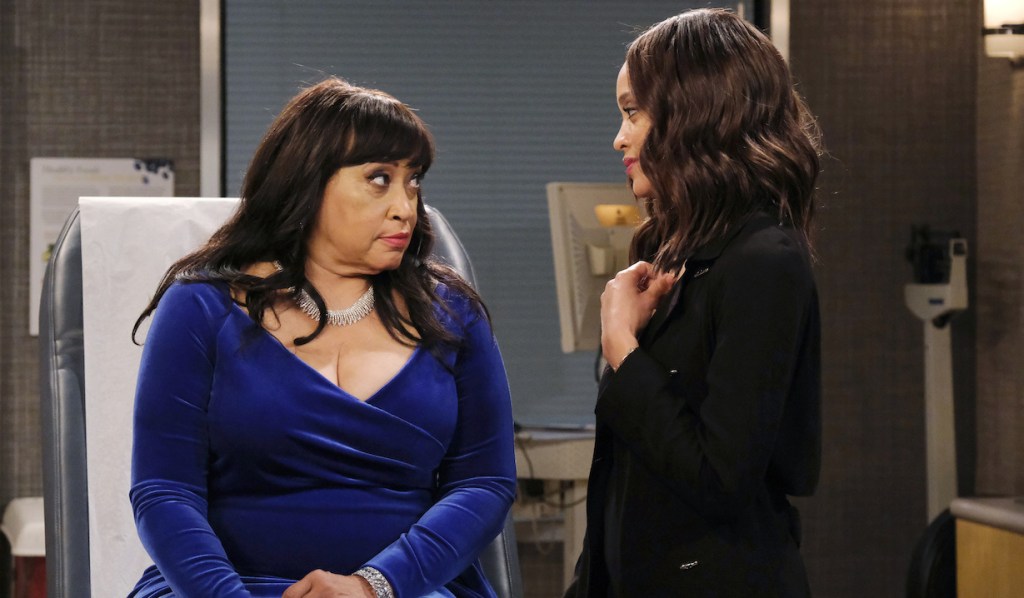 In her bedroom, Chanel leans in to kiss Allie, but she jumps back. She can’t do this. Chanel apologizes, but Allie runs out. In the living room, Allie answers Tripp’s call. She says Chanel will be okay, and that she’ll see him tomorrow. After she hangs up, Chanel walks into the living room. She knows she just took it too far in the bedroom, but she doesn’t want to be alone tonight. She just feels sad and humiliated and lost. Allie agrees to stay.

Back in the bedroom, Chanel promises to stay on her side of the bed, as they crawl under the covers. When they can’t fall asleep, Allie tells Chanel she can’t believe what her brother is giving up. Anyone would be lucky to be with her. Allie leans over and kisses her.

Tripp returns to Paulina and Lani at the hospital. He relays that Chanel is okay. He also tells the patient that she has a sprain and should stay off her ankle. When he leaves, Paulina again asks Lani about blurting out ‘Mom.’ Lani thinks she just said in the heightened moment. She will always see Tamara as her mother. However, deep down, she sees Paulina that way too. Paulina smiles. After receiving a prescription and a cane, Paulina assures Lani she can get home okay. It means a lot that she was there for her though.

When Paulina gets home, she opens Chanel’s door and sees her and Allie passionately making out in bed. Her mouth drops as she closes the door.

Downstairs at the mansion, EJ fills Belle in on Johnny’s busted-up marriage. They move on to discussing his kidnapping trial tomorrow. When EJ declares he’s representing himself, she cites the saying about having a fool for a client. He says, “All right then, counselor. Why don’t you represent me?” She thinks Chad and Shin would fire her, but EJ will take care of them. Even if that’s true, Belle wonders why she’d want to defend him in court. EJ insists he was framed for Sami’s kidnapping. Belle retorts Sami believes it, so, it’s still a betrayal to her sister. After his continued pleas fail to convince her, EJ orders her to leave.

More: Why Ben could be the first sacrifice on Yellowjackets 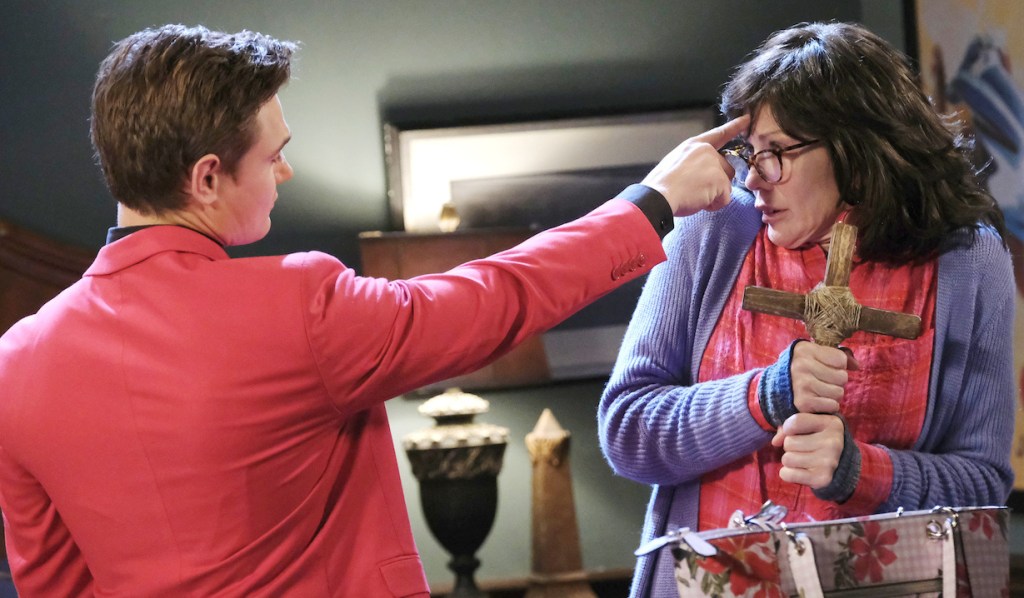 Upstairs, Susan accuses Johnny of being that mean, mean, mean devil himself. Now, she will put an end to his terror once and for all. “Johnny” smirks, assuring her she doesn’t have to fear him. She pulls out the wooden cross. She feels it in her bones that the devil has possessed her sweet grandson. JoDevil flashes his yellow eyes and says, “Congratulations Suzie Q. You figured it out. Now, what are you going to do about it?”

When Susan insists she’s not afraid of JoDevil, he threatens to turn her into a bug so he can squash her. With the cross still thrust at him, Susan declares he will never squash her spirit. She and John Black will save Johnny’s soul. She turns to leave, but JoDevil slams the door. He threatens to go downstairs right now and rip the beating heart out of EJ’s chest. Susan doesn’t think he’d really do that because then everyone will know the devil’s still in Salem. Then, John and his hunky stepson, Eric will return to vanquish him. JoDevil calls that a good point. Keeping the secret is essential to his plan, so he’ll have to find another way to subdue her. When Susan continues her rants, he calls her infantile. This leads Susan to realize he’s still after Ben and Ciara’s baby. JoDevil calls her too smart for her own good. Susan won’t let him do anything to that little baby. She’ll tell EJ right now what’s going on. JoDevil opens the door for her. 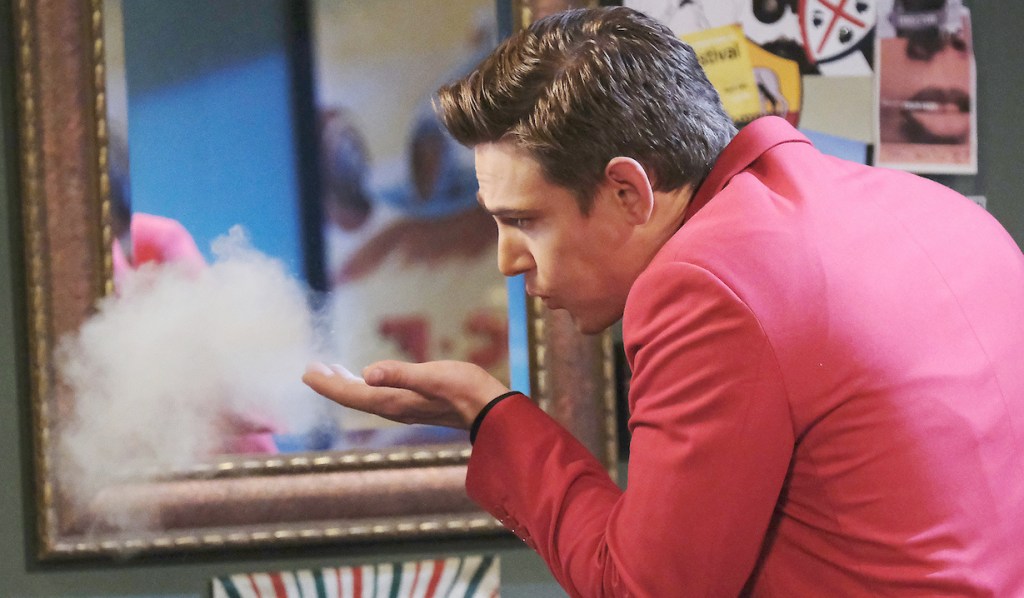 More: Will Johnny be Days’ next great villain?

Susan races downstairs to find EJ. She tells him she’s leaving Salem because Roger needs her. Johnny joins them, as EJ wonders what the emergency is. JoDevil flashes back to pressing his finger to her forehead, altering Susan’s whole demeanor. Back in the present, “Johnny” tells EJ he encouraged Susan to go home. In a daze, Susan says her goodbyes and leaves. Confused, EJ turns to “Johnny” and says, “What just happened?”

Next on Days of Our Lives: Rafe gets shocking news, and Chad wants to take the stand.

Stacy Haiduk’s Susan might be leaving Salem, but her other alter ego is out there just waiting to return. She’s not the only actress who has played two roles on the same show though. Check out our photo gallery below!

EJ Unwittingly Makes a Deal With the...