Chad Is Forced to Admit the Truth When Kate Dares Him To Swear on His Father’s Grave — Plus, Nicole Explodes Over EJ’s ‘Epiphany’

Wednesday, January 5, 2022: Today on Days of Our Lives, Chad urges Kate to keep his secret, Rex fills Xander in, and EJ makes a bold apology. Xander literally bumps into Rex outside the Pub. He asks if he can buy him a beer. Rex reluctantly agrees. Inside, Rex recounts how Sarah dumped him, which Xander calls bizarre — especially when you factor in Kristen posing as Susan. Rex tells Xander about the DiMera island Kristen was going to ship Kate off to. He adds that Kristen broke up with Jake while impersonating Kate. Rex remarks Xander is lucky that didn’t happen to him. Rex gets up to pack for his trip back to Chicago. They agree to update each other if they hear from Sarah. Rex hopes Xander gets some answers.

More: Looking back, and forward, on AMC’s 52nd anniversary At the Horton house, Gwen accuses Abigail of looking for Sarah to get back at her. Abby scoffs and Jack and Jennifer defend their daughter’s interest in the story. When Gwen continues to accuse her sister of trying to come between her and Xander, Abigail wishes her parents well in Boston and leaves. Jenn walks her out.

Jack asks Gwen why she’s so afraid she’s going to lose Xander. Gwen explains no one has ever had her back like Xander has. She’s really afraid of losing him to Sarah, if she comes back. Jack reminds her Sarah dumped Xander on the morning of their wedding because she can’t forgive him for the baby switch. Plus, Xander found Sarah in bed with Rex. Jack thinks she has nothing to worry about. He knows how deeply Xander loves her. Not even Sarah can change that.

More: Why this might not be the last of Jack 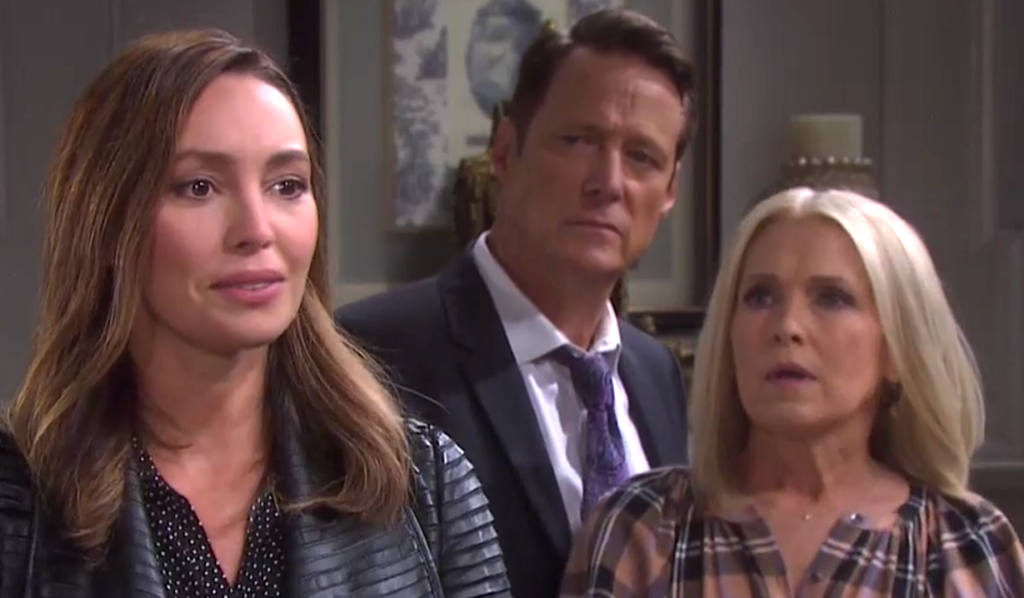 Jennifer returns, as Gwen promises to stay out of Abigail’s way. Jack assures her she can call or visit if she ever needs anything. Oh, and she can call him Dad. They hug.

Xander heads to the DiMera mansion and tells Abigail he wants to help find Sarah. She orders him to tell her everything he knows about the day Sarah left Salam.

More: A surprise visit could change everything for Chloe 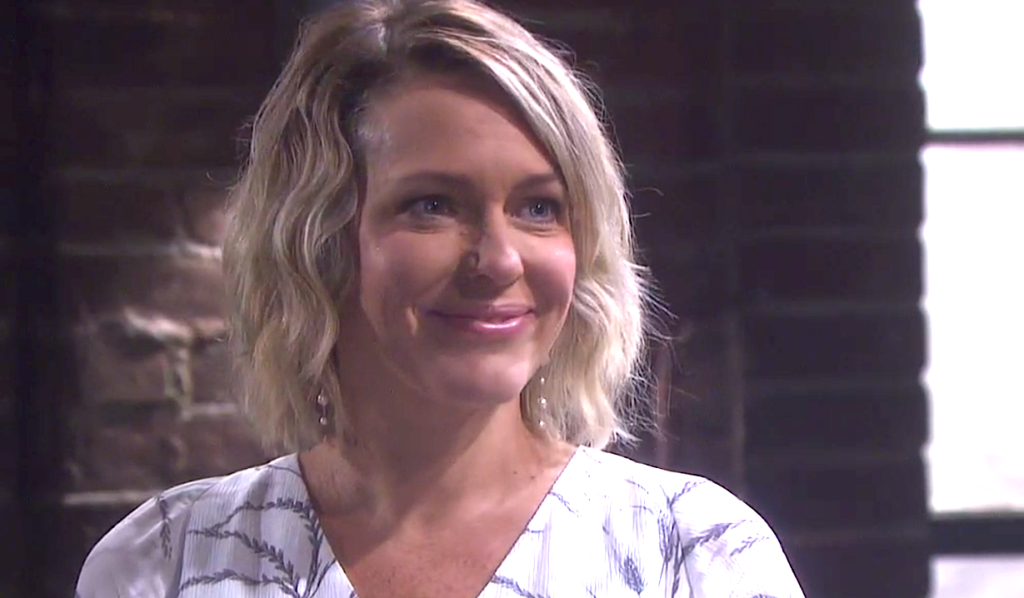 EJ comes to see an unreceptive Nicole at Basic Black. They bicker, leading Nicole to accuse Sami of beheading Duke. EJ defends his estranged wife, but says he’ll ask her about it as soon as they’re on speaking terms. Nicole grins as she informs him Sami left town with Lucas. EJ can’t believe Sami ran back to Lucas after he had her kidnapped. Nicole laughs, wondering if he has any proof. EJ doesn’t, but insists the evidence against him was manufactured by his own brother. Nicole doesn’t care one way or the other and orders him out. EJ needs to apologize first. He prays she finds it in her heart to forgive him. Nicole thanks him for the apology, but passes on accepting it. She accuses him of not telling her about reuniting with Sami in case she dumped him. Nicole spits she will not be his consolation prize. EJ knows it was disrespectful, but he now realizes Nicole is who he wants. Nicole explodes, ranting about all the men who have chosen someone else over her. When is someone going to put her first? She storms out.

More: The story Days is primed to tell

In Chad’s office, Kate suspiciously grills the DiMera about the so-called evidence he found on EJ. After he bumbles about with his story, Kate accuses him of fabricating the paper trail. Chad insists he didn’t. Kate asks him to swear on his father’s grave that he’s telling the truth. Chad hesitates and then admits it. However, the evidence was planted by none other than her son, Lucas. She wonders why Lucas would go through all that trouble, considering EJ was already charged with kidnapping Sami. Chad believes Lucas is the real kidnapper. Kate refuses to believe it. She can’t have failed two sons. Chad declares the truth never has to come out. Kate thinks maybe it should. She doesn’t think EJ should go to prison for something he didn’t do. Plus, Lucas might need serious help. Chad smirks as he continues to make his case. He urges Kate to keep it a secret. Kate doesn’t think she can do that. EJ appears, very interested in what secret they’re talking about.

More: Did GH really kill off an iconic character offscreen? 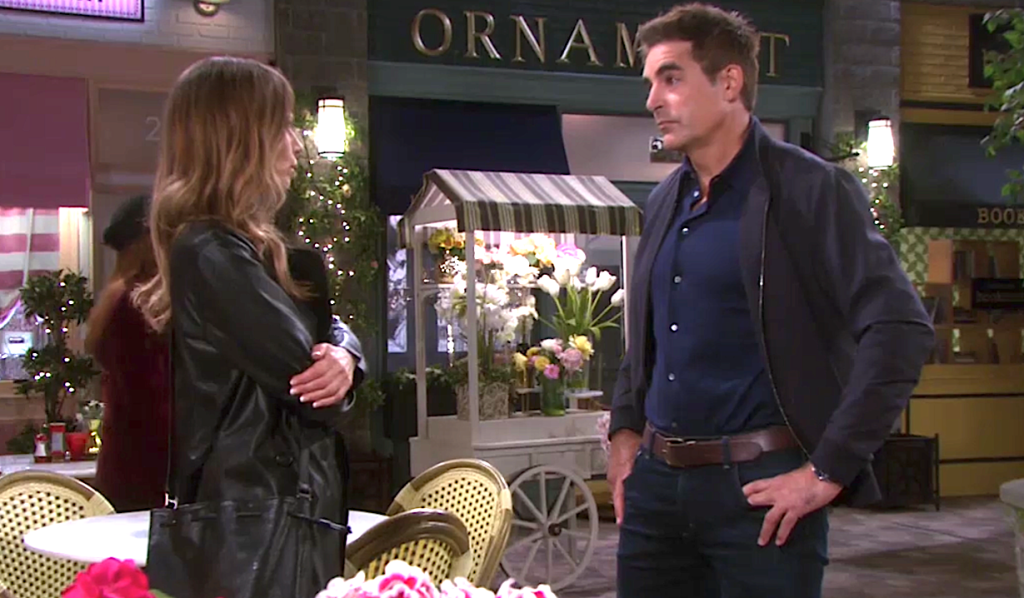 More: Paying tribute to the one and only Ruth Warrick

In the Square, Ava insists to Rafe she didn’t attack Duke, but wonders if she has a reason to be jealous. Rafe assures her she doesn’t. After she prompts him, Rafe apologizes for accusing her. In fact, he says, Nicole thinks it was Sami who beheaded the stuffed animal. Ava says she did see a blonde at the elevators, but she didn’t see a face. Rafe thinks they can check the security cameras. Ava can’t believe he’s going to so much trouble for a stuffed bear. Rafe points out someone could be sending a threatening message to Nicole. Ava continues to mock him, leading Rafe to agree this is all juvenile and petty. Ava scoffs. Nicole is lucky Sami didn’t do worse than cut up a stuffed animal.

Later, Rafe brings Ava an apology cake. He asks if she can forgive him for being a jerk. She fantasizes about smashing the cake in his face and storming off. However, she says yes and hugs him. Nicole happens upon them. Ava glares at her.

Next on Days of Our Lives: Xander and Abigail team up, and Paulina has plans for Chanel and Johnny.

We watch them with their onscreen love interests every day, but do you know what your favorite actors’ offscreen partners look like? Scroll through our photo gallery below!

Gwen Panics as Abigail Agrees To...

The Devil Tempts Johnny With What He...