Lucas Makes a Huge Confession About Sami, While Johnny and Chanel Return From Italy With Their Own Bombshell

Tuesday, December 21, 2021: Today on Days of Our Lives, Lucas and Philip share their deep dark secrets, Chanel and Johnny can't get enough of each other, and Kate and Victor have a change of heart. 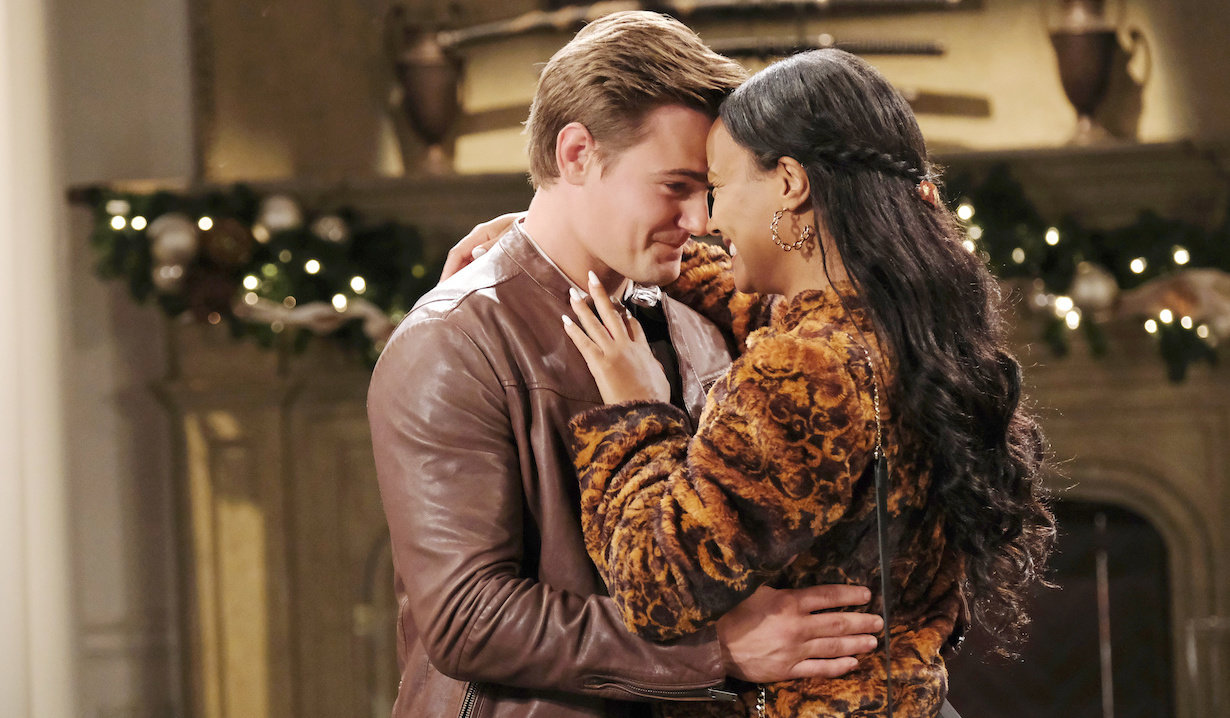 In the morning, Kate promises to help Philip get his life back together. First, she has to tell Victor what’s going on though. She gathers her coat and leaves her room.

Downstairs at the Pub, Kate sneaks by Lucas, who’s sitting at the bar. As she leaves, Sami approaches and asks Lucas about Philip. He tells her there’s still no leads. Sami shares she doesn’t know anything about Marlena either. Lucas points out it’s the season of miracles, and toasts with coffee to getting what they want. Although, Lucas says he already got what he wanted when she came home, reminding her he rescued her. She laughs, reminding him, she already thanked him. They playfully bicker when he brings up EJ, and then he heads upstairs to check on Kate.

More: Should Philip look to the past to save his present? 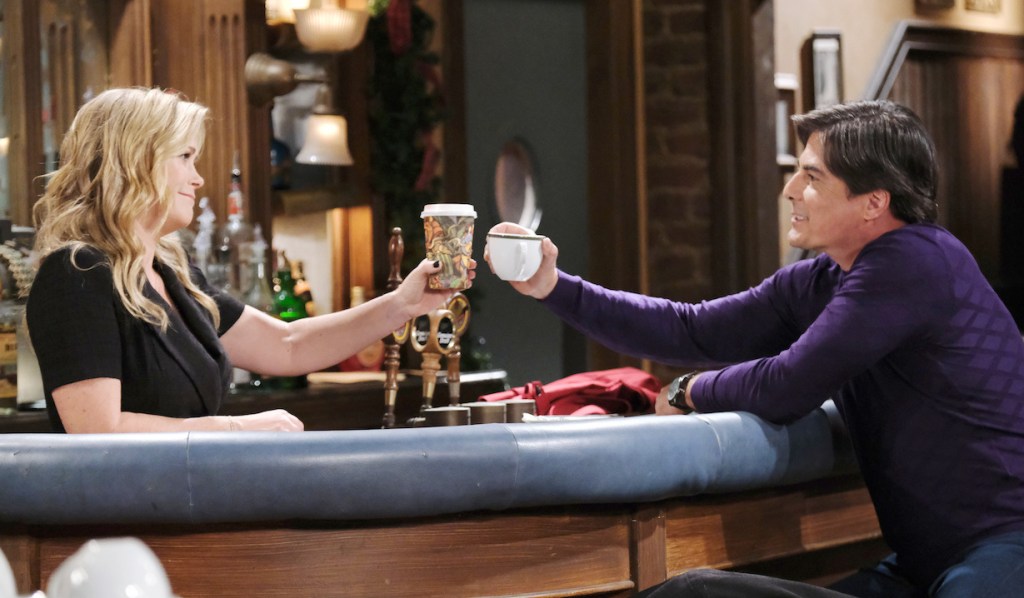 Lucas knocks on Kate’s door. When she doesn’t answer, he says she’s not the only one heartbroken over Philip. He loves and misses him too. He begs her to open the door. Lucas jumps back when it’s Philip who lets him in. Philip says how much it means to hear his words, but Lucas can’t tell anyone he’s alive. Lucas agrees, but wonders what he’s going to do. Philip relays Kate has a plan, but he’s not sure he’s fixable. He fills his brother in on all the damage he’s caused, wondering how he undoes it. Philip knows Chloe will want nothing to do with him, but he’s not sure he can walk away from her. Lucas points out he has bigger things to deal with. However, he commiserates over going to extremes for the woman he loves. Philip asks what he’s talking about. Lucas bemoans Sami always choosing EJ over him. He then confesses he’s the one who kidnapped Sami. 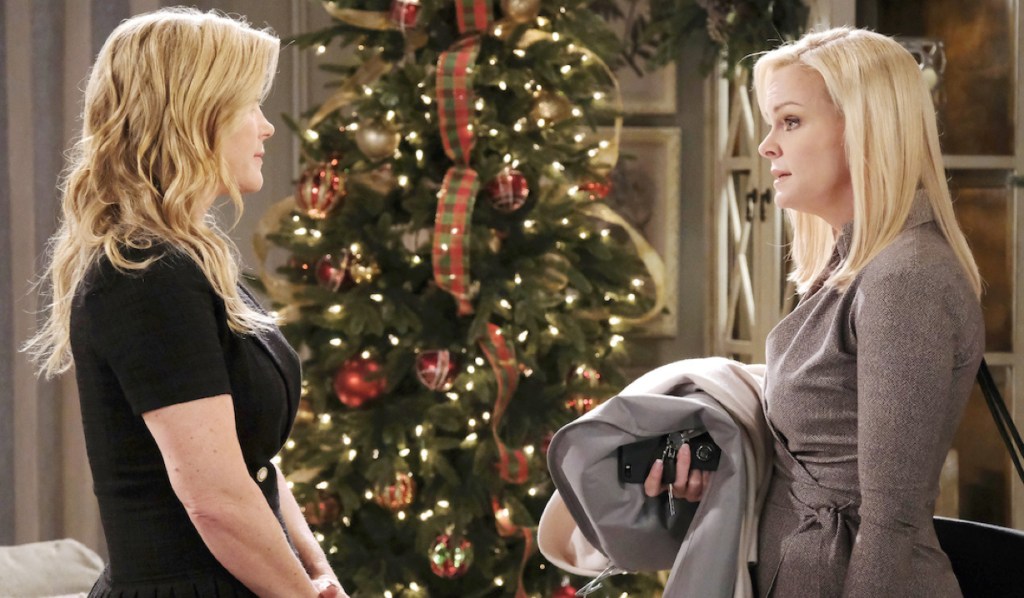 Sami finds Belle at John and Marlena’s place. After Belle relays there’s not much of an update on Marlena or Philip, Sami asks to hire Belle as her lawyer to fight her divorce. Belle can’t believe Sami is thinking about herself at a time like this. Besides, it’s unethical to represent her considering she works for DiMera. And also, she doesn’t take cases she knows she can’t win.

Paulina calls from home to confirm her flower bouquet was delivered to Lani. She hangs up with a sigh, but perks up when Chanel comes home from Italy. After catching up, Chanel blames herself for blurting out her secret about Lani at the wedding. Paulina tells her the devil made her do it. A shocked Chanel can’t believe Johnny’s grandmother was actually possessed.

More: Elani’s portrayers get their Santas on behind the scenes 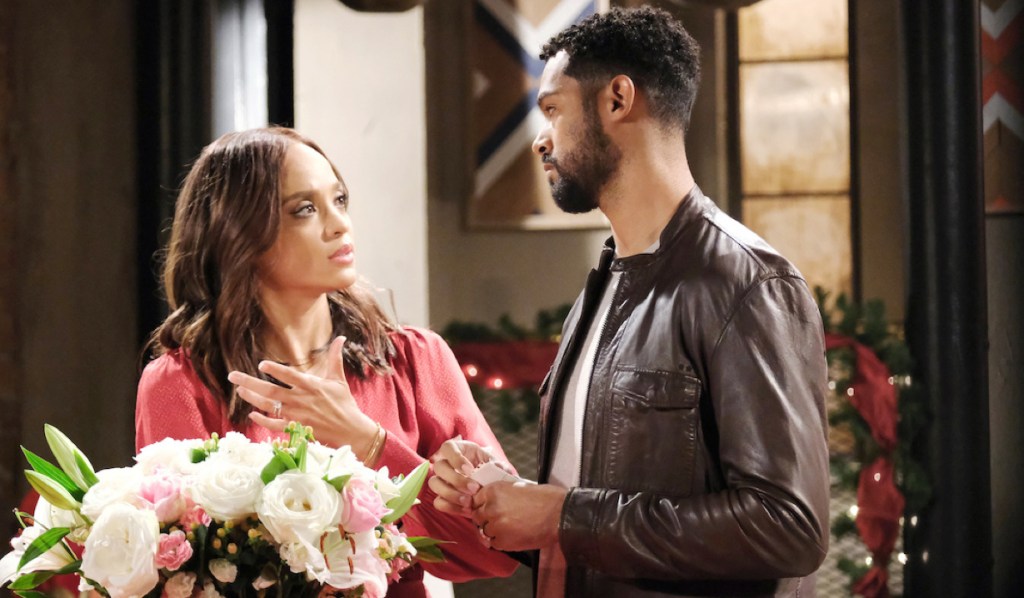 At home, Eli reads Paulina’s card to Lani that accompanied the flowers. Lani doesn’t want any part of her, but Eli urges her to talk to her and deal with it for her own sake.

Back at Paulina’s, Chanel is about to share her own news when Lani stops by. Chanel apologizes for what happened at the wedding, but Lani knows it wasn’t her fault. Chanel is grateful to have a sister now. Lani is too. Paulina grins, watching her daughters share a moment. Lani hardens though, turning to Paulina. She says the flowers were beautiful, but she’ll be taking them to the hospital to give them to someone who actually wants them. She then rips up the card and orders Paulina to stop reaching out to her. She storms out. Chanel invites a dejected Paulina to her lunch with the DiMeras.

More: Lani’s next story is just waiting to be told 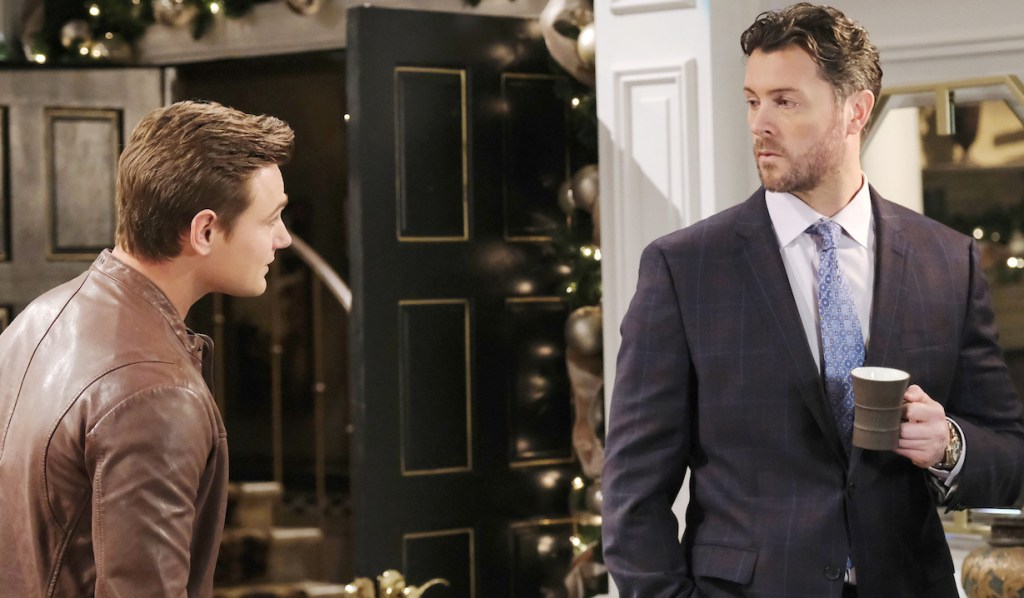 Johnny meets with EJ at the DiMera mansion and asks what he missed while he was gone. EJ clears his throat and takes a sip of coffee before filling him in about Marlena and Sami. Johnny urgently pulls out his phone to call his mother. Sami answers and agrees to come over now to see him. After Johnny hangs up, EJ remarks it will be the perfect time to serve Sami with new divorce papers.

More: MarDevil brings the heat this Christmas in Days promo 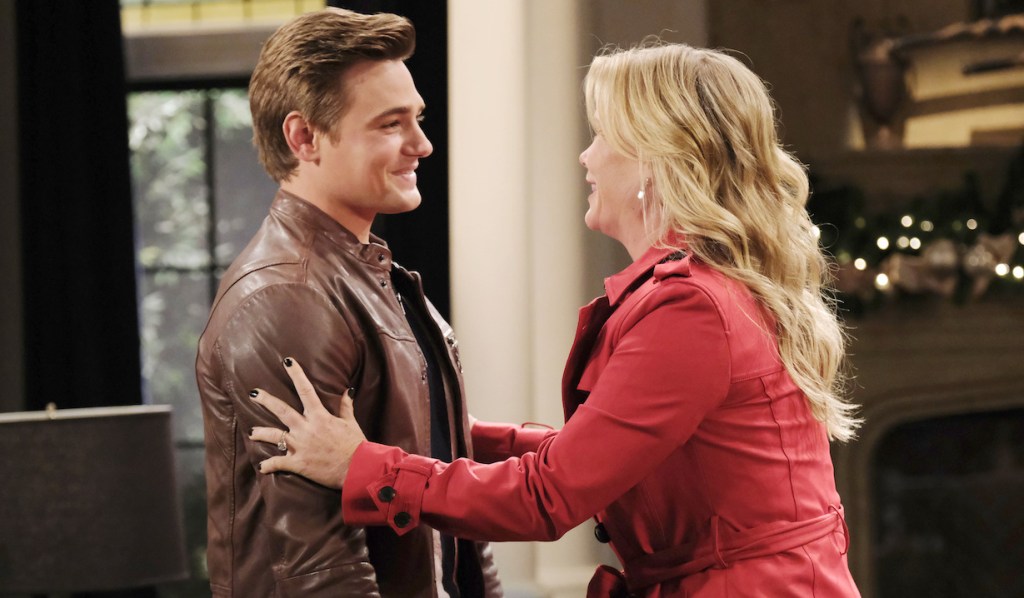 Later, Sami runs into the mansion and embraces her son. Johnny asks his mother to forgive him for not realizing something was wrong. Sami assures him it’s not his fault. EJ watches them with a set jaw. Johnny gets a text from Chanel about Paulina joining them for lunch. He can’t wait for Sami to meet Chanel and goes to tell Harold to set two more places. Once he’s left the room, Sami steps to EJ, reminding him what it feels like to be in love, like their son.

As Sami tries to make EJ admit he still loves her, Johnny returns with Chanel and Paulina. After making introductions, Johnny and Chanel fawn all over each other while talking about their trip to Rome — where they got married! Johnny and Chanel kiss, as their parents stare wide-eyed. 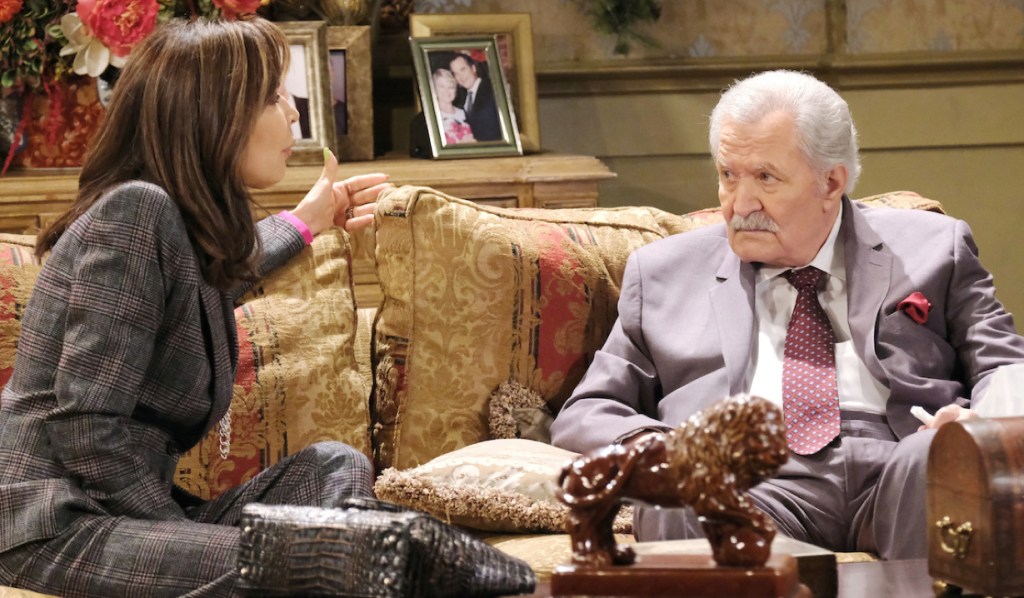 Kate sits with Victor on his couch at the Kiriakis mansion. She tells him Philip is alive. Victor blames Chloe for driving him to it. Kate is afraid Philip thinks life is not worth living. He’s fragile, so they need to make him disappear and get him the help he needs. Victor isn’t on board with that plan. He won’t let Brady go to prison for a murder he didn’t commit. Kate calls Belle for help.

When Belle shows up at the mansion, Kate and Victor tell her they are going to revoke the document declaring Philip legally dead. That way, Trask will be forced to release Brady. Belle is happy to hear it. She assures them she and Brady are trying hard to piece together what happened that night. Victor and Kate exchange tense glances, as she further tells them about the erased video footage and her belief that Kristen is framing Brady. After Belle leaves, Kate tells Victor they now need to make sure Philip gets the help he needs.

Next on Days of Our Lives: Kate keeps the truth from Roman, and EJ has a change of heart.

There’s still a couple of shopping days left. If you’re in need, get some gift ideas for the Days fans in your life through our photo gallery below. 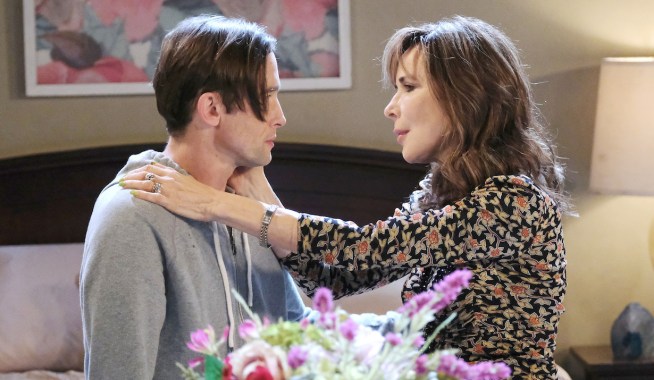 Chloe Opens Kate's Eyes Who Tries to Get Through to Philip — Plus, Tripp Plays Right Into MarDevil's Hands

EJ Has Other Ideas When Sami Tries to Rip Up the Divorce Papers — Plus, Jan and MarDevil Lure Shawn Into Their Trap 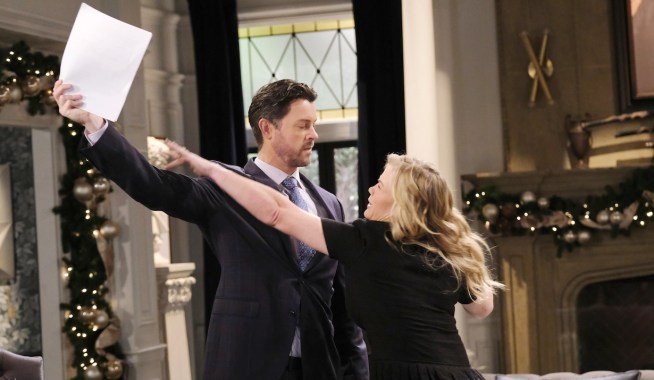