Maggie Finds Brady With a Drink, While a Ranting John Pays Ben and Ciara a Visit

Monday, November 29, 2021: Today on Days of Our Lives, Brady confides in Maggie, Shawn puts out an APB on Marlena, and Ben embraces his opportunity to help Dr. Evans. After getting his call, Maggie meets Brady at the Bistro. She sees a drink on his table and asks how many he’s had. He says he hasn’t had a sip, but he can’t find the strength to send it back. She knows how hard it must have been to find Kristen trying to run off with Rachel. She knows people can have just a strong a hold over addicts as alcohol. Brady admits the drink isn’t just about Kristen, but about Chloe as well. He has real feelings for her, but he can’t do anything about them because of Philip. He admits it hurts like hell knowing he and Chloe could have had a chance if not for Philip. Maggie wants both men to be happy, but they both can’t have Chloe. At the mansion, Chloe and Philip finish up their Thanksgiving dessert. She suggests they walk off all those calories by visiting their tree. Philip flashes back to ripping it out of the ground in a fit of rage, and says he’s too stuffed to move. Besides, it’s cold outside and he’d rather stay curled up on the couch with her.

Philip asks about work, wondering if there’s anything Chloe wants to tell him. She says there is. She knows he saw her and Brady go into the Salem Inn together. She wonders why he hasn’t said anything. Philip says he assumed nothing happened, right? She says of course not, but confesses she thought he would have flown into a rage over it. Chloe thanks him for finally trusting her and kisses him. He suggests they crawl into bed and watch Christmas movies, but she has to work early so she leaves. Alone, Philip’s expression hardens. He says there’s no chance Brady and Chloe will make a fool of him. 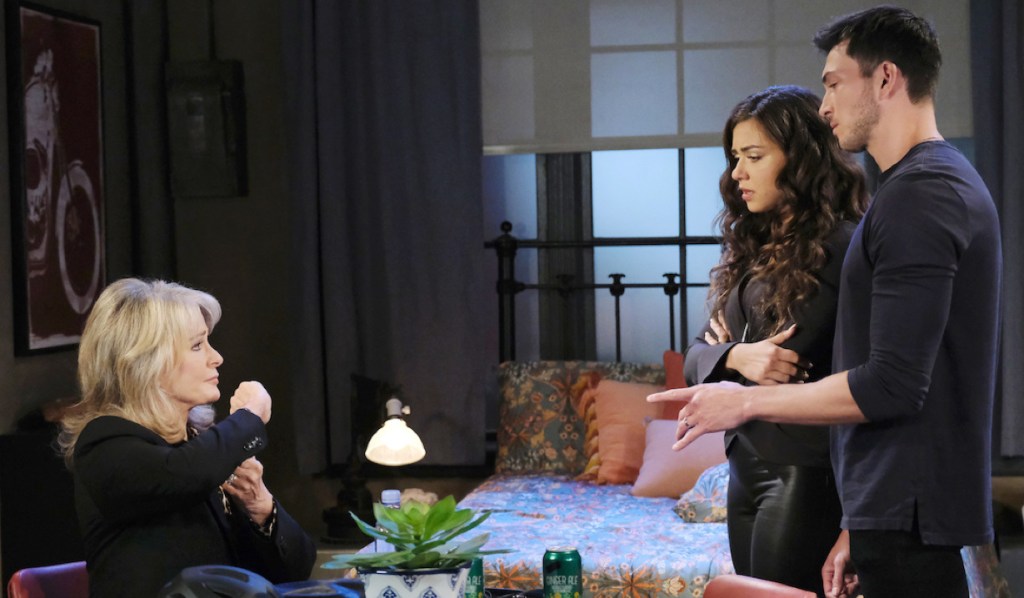 As a disheveled John catches Shawn up at Julie’s about his captivity, a worried Belle calls her husband. Shawn tells her MarDevil got away from him, but everyone’s fine. Plus, her dad is safe and there with them.

At Ben and Ciara’s, a frantic “Marlena” tells them they have to hide her because John’s been abusing her. She shows them a bruise on her wrist. Now, she’s afraid to go home. Ben is horrified. Ciara calls it horrible, but doesn’t think it sounds like John. “Marlena” blames it on the fits of rage he’s experienced since his aneurysm last year. When she pretends to be scared, Ben assures her they will help her, whatever she needs. She goes to the bathroom to clean up. 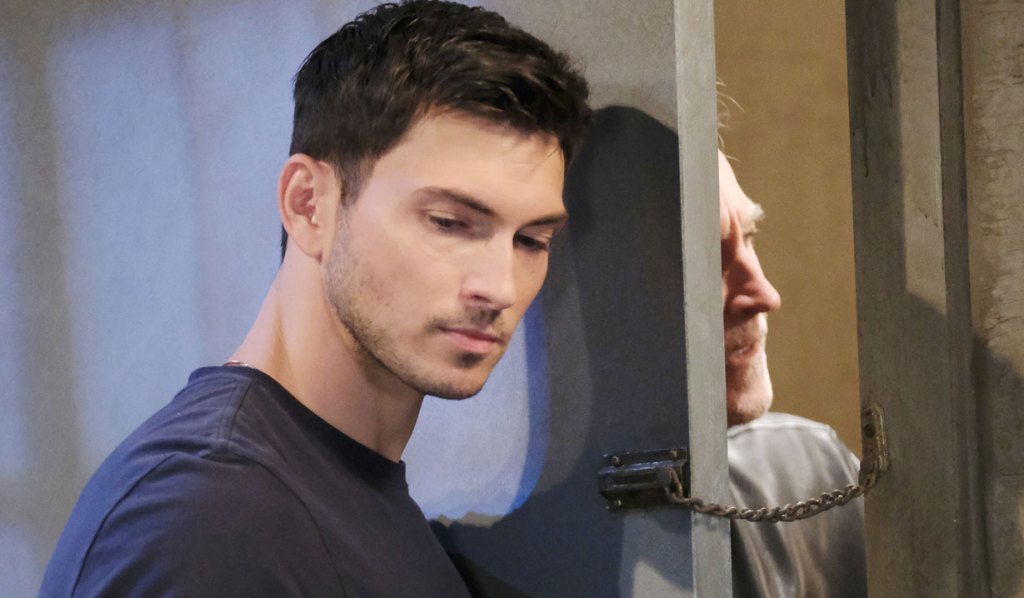 Alone in their studio, Ciara expresses her doubts over “Marlena’s” claims. She can’t imagine John abusing Marlena for a year or her putting up with it. They turn, as they hear John angrily bang on the door. Ben tenses as he puts the chain on the door and cracks it open. John rants and pounds from the hallway. He calls Doc a bitch, swearing to god he’ll kill her.

As Shawn talks to Belle on the phone at Julie’s, he turns to find John passed out on the floor. Back at Ben and Ciara’s, Ben closes the door on a ranting “John,” who morphs into a smirking MarDevil.

After John is brought to the hospital, Belle apologizes for not trying to look harder for him. John knows it’s not her fault. They just need to find Marlena, now. Kayla relays that she has ordered a scan to check for a head injury. Plus, she’s going to give John fluids to hydrate him.

Still at the Bistro, Brady gets a call from Belle who tells him Marlena’s been possessed by the devil. Meanwhile, Steve joins Kayla in John’s room. John tells his friends how thankful he is for them. Steve assures them they’ll find Marlena. 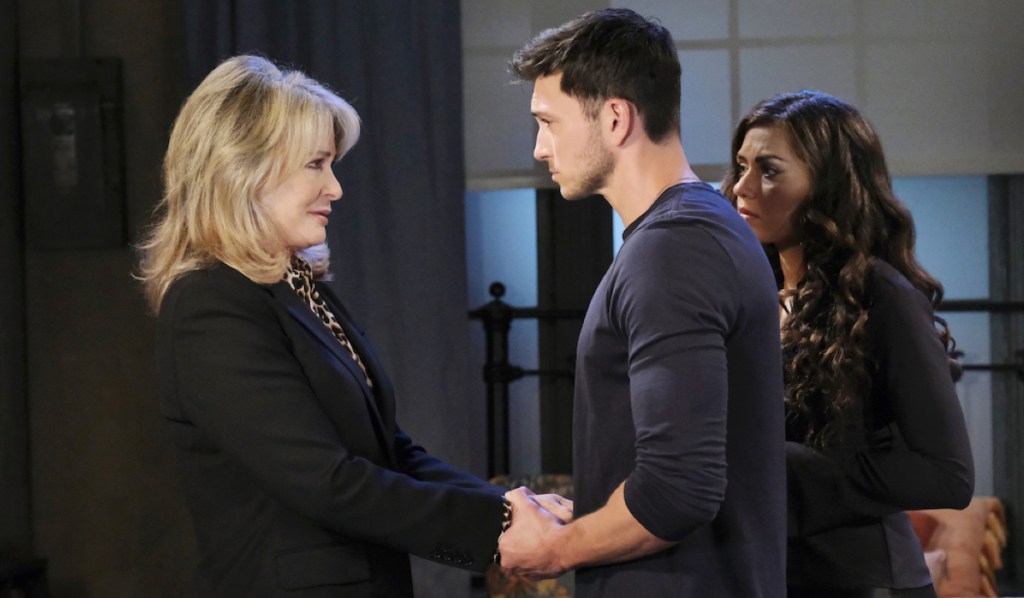 More: Who’s next to be kidnapped on Days?

Back at Ben and Ciara’s, “Marlena” emerges from the bathroom. She doesn’t want them to call the cops because John has friends at the department. And she can’t call family because Sami and Eric are both out of town, and she doesn’t want Brady and Belle to turn against their father. Ben says there must be something they can do. “Marlena” responds, “There is. We have to leave town.” She fears going alone because John could find her. She knows it’s a big decision and leaves them to talk about it.

Ciara tells Ben they can’t just leave town. He points out Dr. Evans has never asked anything of him. Now, she’s scared and needs their help. Ciara calls it weird, suggesting they call Belle or Brady. Ben thinks this is his opportunity to pay her back for all she’s done for him. Heck, they’re even having a baby right now because Dr. Evans convinced him he could be a good father. “Marlena” returns, asking if they’ve decided.

In the hospital lobby, Shawn tells Belle he has to call it in. She knows. As he puts out an APB on Marlena, MarDevil heads out with Ben and Ciara.

Next on Days of Our Lives: Sami tries to identify her kidnapper, and Susan gets an unexpected visitor.

Philip may be spiraling out of control over Chloe and Brady, but Chloe has had other loves. Relive her life and romances in the photos below.

After Revealing Her True Self at...

Xander Thanks a Very Confused Susan...