All Hell Breaks Loose as Paulina’s Secret Is Exposed, Much to MarDevil’s Delight

Thursday, November 18, 2021: Today on Days of Our Lives, Theo blasts Chanel, Eli comforts Lani, and Abe needs a friend after the truth comes out at the wedding. 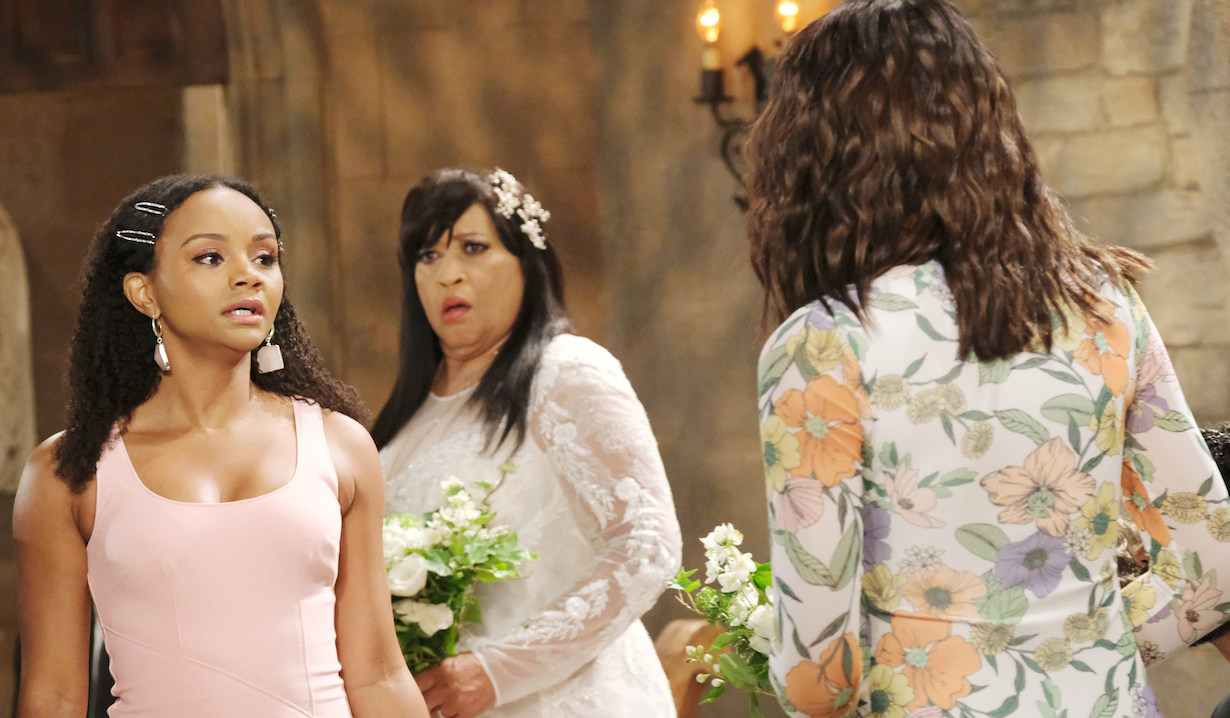 Belle finds Shawn at the SPD. She tells him Julie wants her help her sue her own mother. After talking it over with him, Belle agrees to take Julie’s case.

Susan bangs on the crypt door yelling for help. John, still chained, growls, “Shut. The. Hell. Up!” Her pounding and screaming is making his head explode. As she tries to commune with the spirits in the crypt, she reveals she doesn’t remember what happened after she turned into a cat. John shouts that she tried to seduce him. Susan recoils. She’d never betray Dr. Marlena Evans like that. John interrupts her rant to tell Susan it wasn’t her. The devil transformed her into Kristen. Susan is beside herself thinking she made John cheat. He explains she was transformed into Kristen, and warns the devil is coming back. Susan panics and pounds on the door. John rolls his eyes. As Susan slumps to the floor, she starts pinning her hair back. His eyes light up. She can pick a lock with her hairpin.

Susan gets excited and tries to follow John’s lock picking instructions, but fails. John thinks she might have better luck with the door. She runs to the door and tries to unlock it.

More: Will’s next masterpiece, in time for Christmas 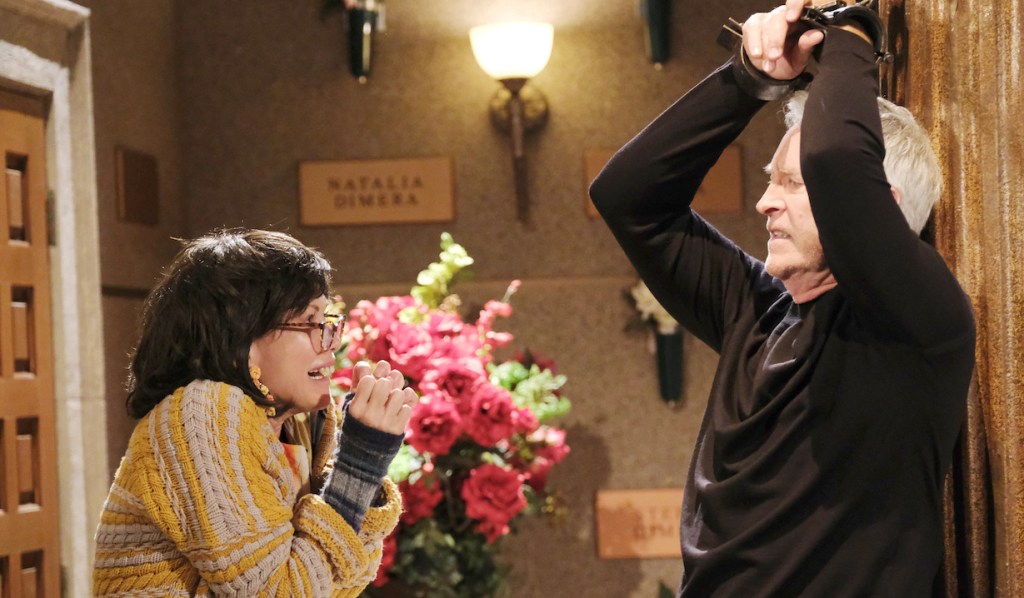 As Abe and Paulina stand in front of “Marlena” at the altar, Chanel stands up. She has something to says. Thinking this is about her not being maid of honor, Paulina says she already explained why she asked Lani to stand up for her. Chanel blurts, “You asked Lani because she isn’t really your niece, she’s your daughter.” Paulina orders her to sit down, as the guests gasp, but Chanel steps to Lani. “We’re not cousins,” she says, “We’re sisters.” Abe asks who told her that. Chanel looks to “Marlena.” Chanel says it doesn’t matter and asks her mother to confirm it. Paulina hates to says this, but, “My only daughter is lying.” 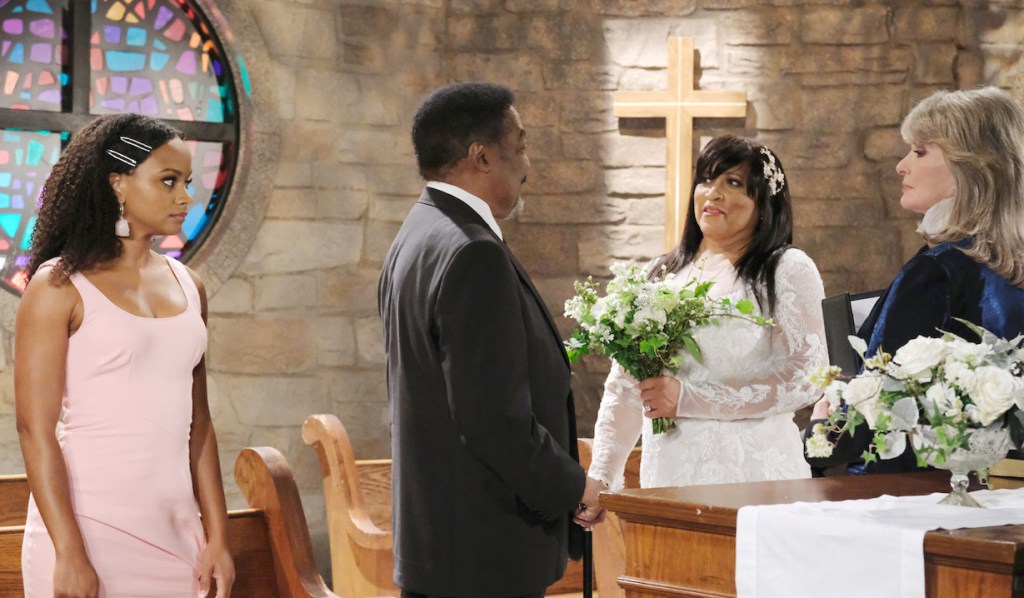 Lani asks Chanel to tell her the truth. Chanel says she’ll put her hand on a stack of bibles if she has to. When Paulina repeats that Chanel is lying, Olivia stands up and says she can’t bear this any longer. She tells Lani that Paulina is her mother. Eli holds Lani as she tries to process the news. Olivia tries to explain they thought they were doing the right thing. Lani sobs as she realizes Abe isn’t her father. Abe calmly asks Paulina if it’s true. He tells her not to lie because he can see it written all over her face. Paulina wants to get married first and then they can talk. Abe can’t believe she thinks there’s going to be a wedding. He walks out. Eli holds Lani, as Paulina runs out in tears. MarDevil beams. 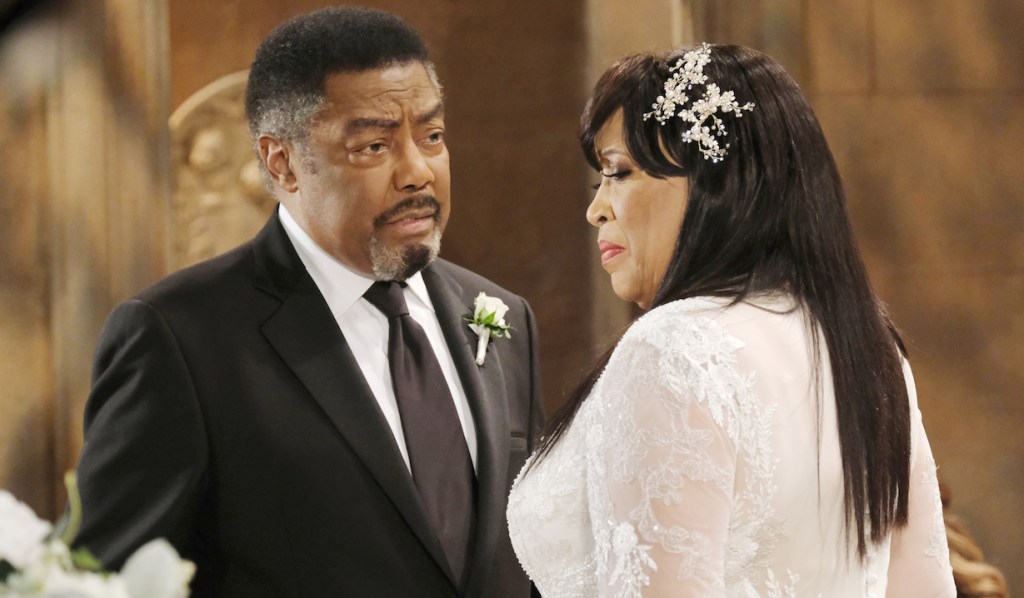 As Chanel cries on Olivia’s shoulder, Eli leads Lani out so they can talk in private. Kate asks Roman if he wants to find Abe, but he knows Abe will find him when he’s ready. They leave, as Theo yells at Chanel for making his dad’s wedding day all about her. She could have handled it differently, instead she made a spectacle of things. MarDevil revels in the chaos she created, and then steps in to defend Chanel. She suggests Chanel take Olivia home. Olivia follows Chanel out, but gives “Marlena” the evil eye on the way out.

More: Remembering the beloved scene-stealer who recently passed away 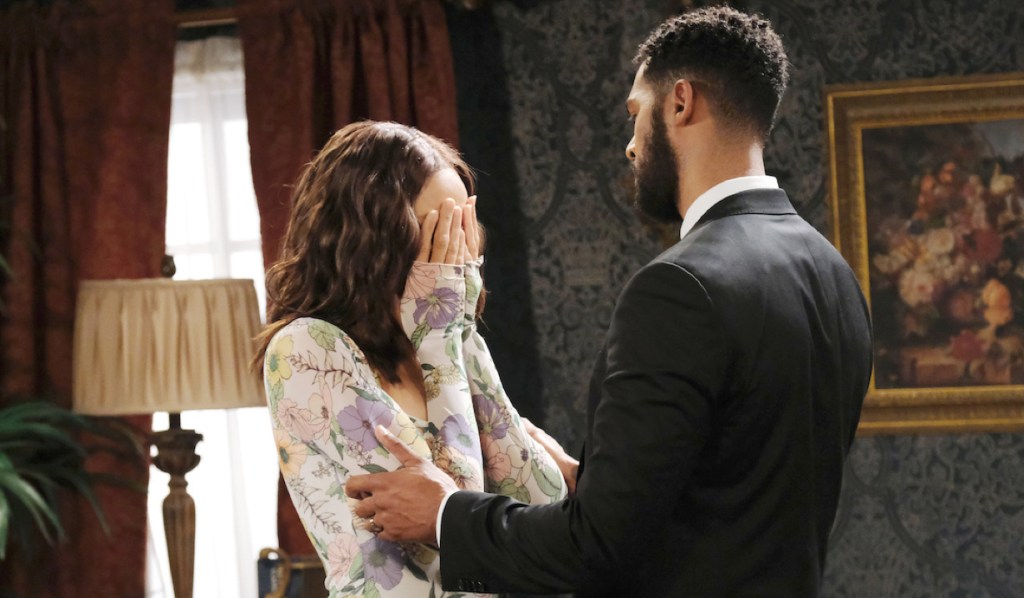 In the private room at the chapel, Eli asks Lani if she ever got a DNA test. She cries as she recounts she just believed her mom. Eli says this doesn’t change anything, but Lani disagrees. She recounts how hard it was to not grow up with a dad. She missed out on all the father/daughter moments Eli will have with Jules. Then, when she came to Salem, she thought she found her family. But Abe isn’t her father and Theo isn’t her brother. “It’s just me.” She sobs on his shoulder. Eli assures her she’s not alone. She has him, Jules and Carver. He knows she won’t lose Abe and Theo either. Lani doesn’t think it will be the same, but Eli says Abe loves her in every way that counts. Lani wonders how he always knows the right thing to say. Eli says, “It’s my job.” Lani knows she couldn’t cut Abe out of her heart if she wanted to, but things will change whether they want them to or not. Eli urges her to get the whole truth from Paulina.

Theo comes to Eli and Lani’s. He needs to tell Lani she’s still his sister. Eli says Lani went to get the truth.

At Paulina’s, Olivia asks Chanel if “that headshrinker” made her blow up the wedding. She knows when the devil has someone’s tongue. 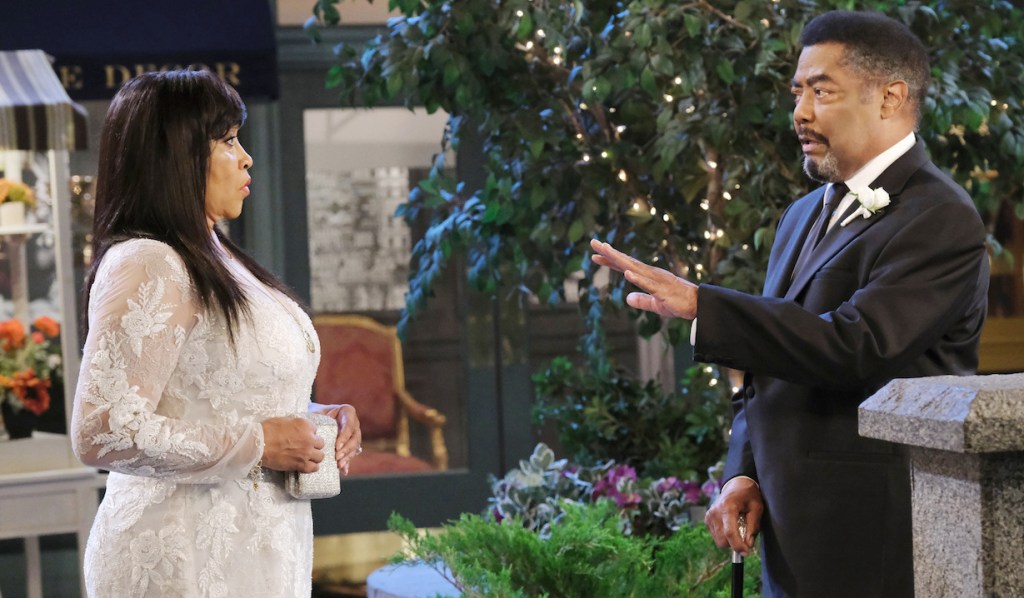 Paulina follows Abe to the Square. She wants to explain, but Abe doesn’t want to hear it. It meant so much to have Lani as a daughter. It was a big part of who he was. He can’t believe Paulina let him give her his heart knowing how much he loved Lani. Paulina says she never meant to hurt him. She truly loves him. He spits her love is like everything else — one big lie. He lost his daughter because she kept the secret to cover her guilt. She swears she kept the secret for him and Lani. Paulina tells him the truth about why she gave Lani to Tamara. She knew she made the right choice when she saw how much Lani and Abe loved each other. She will not apologize for that. Abe wonders if she’s only coming clean now for herself. He won’t listen to anymore lies and walks away. 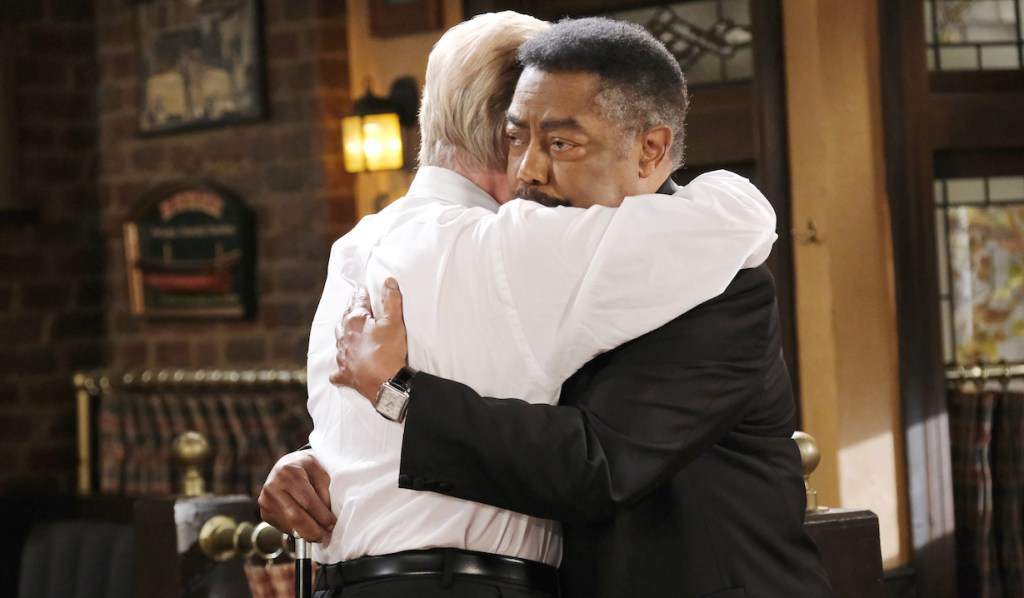 At the Pub, Kate goes on and on to Roman about how she never trusted Paulina. Roman gets her a martini and chowder, declaring their date is not over. After finishing her soup, Kate confirms there will be many dates after this. She heads upstairs to change. Abe walks in. Roman asks if he can get him something. Abe says, “Just a friend.” Roman hugs him.

As Susan unlocks the door in the crypt, John yells for her to go get help. However, MarDevil shows up and says to Susan, “Going somewhere?” 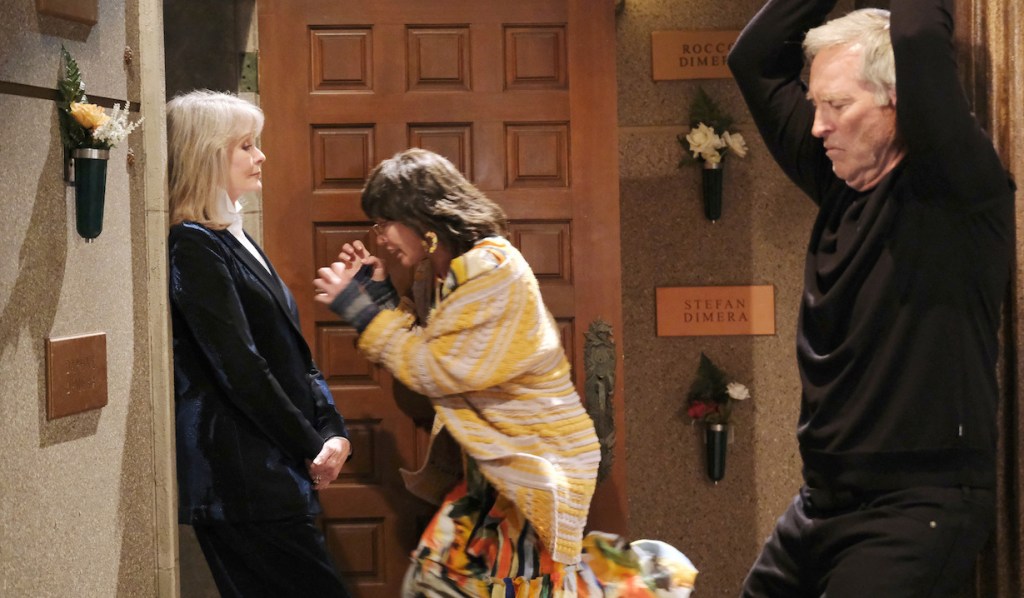 Next on Days of Our Lives: Lani confronts Paulina, and Chanel turns to Johnny for comfort.

The reveal of Paulina’s secret has been long time coming. Look through our photo gallery of other highly anticipated scandalous soap opera reveals below. 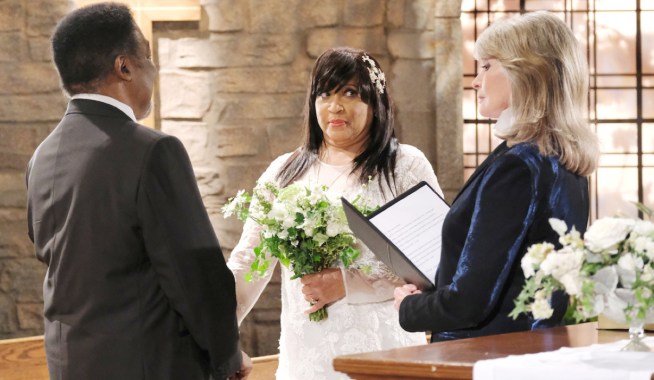 As Lani Lashes Out at Paulina, Sami Manages to Call [Spoiler] 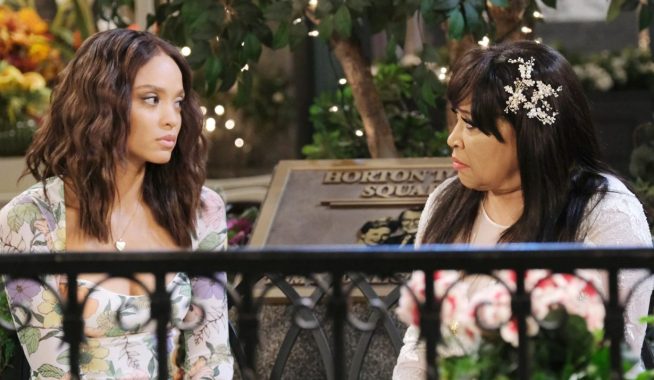