Kristen Runs Into [Spoiler] as She Tries to Flee With Rachel — Plus, EJ Has a Surprise Reaction to Nicole’s Betrayal

Wednesday, October 27, 2021: Today on Days of Our Lives, Kristen's attempts to escape are thwarted, Nicole defends herself to EJ, and Jack tries to reason with Victor. 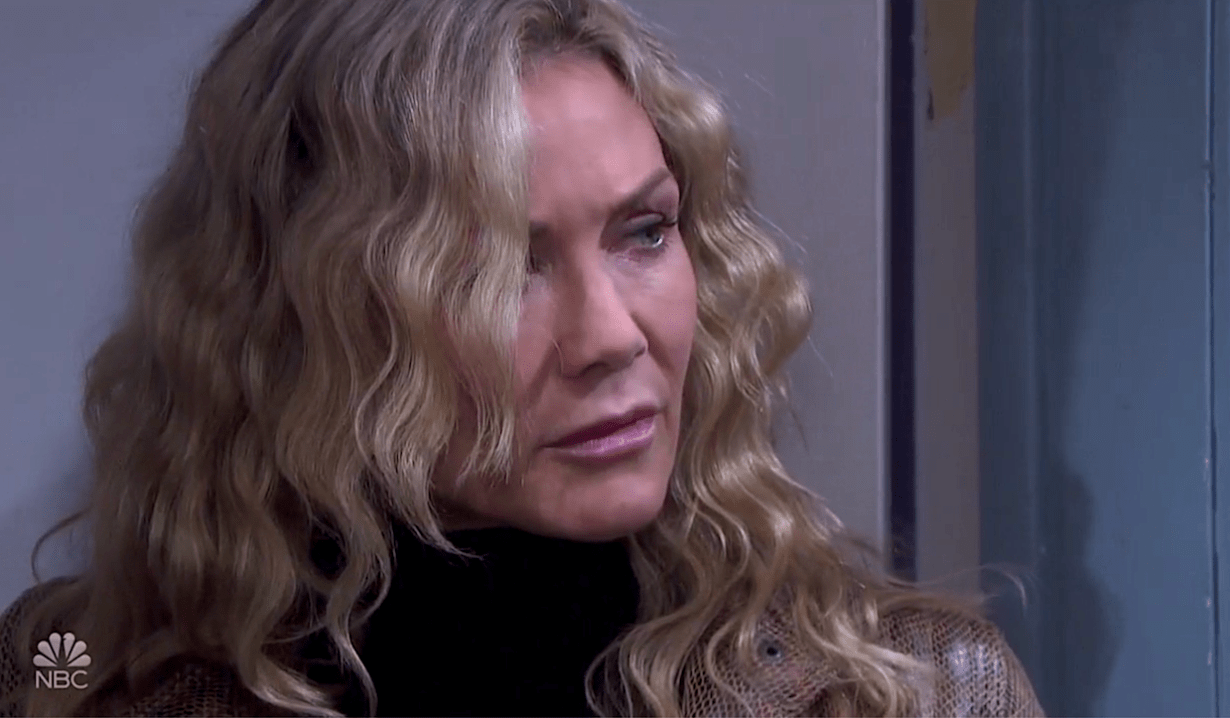 Trask calls Victor, who is dining at Julie’s Place. She assumes their deal is off since he hasn’t found Kristen. He reminds her it’s only been 24 hours and assures her Steve is on the case. He will find her.

After Victor hangs up, Jack sits down to ask about the deal he just made with the D.A. Victor wonders why he cares. Jack points out Xander’s his friend and Justin will always be family. Besides, Gwen is his daughter. Victor stops him. Who said anything about Gwen? Victor is only dealing with his family. Everyone else is of no concern. Jack points out his nephews care about the women he’s leaving behind. He opines they will stay in prison unless Victor gets them all out. Victor won’t budge on his deal. He does, however, fill Jack in on hiring Steve to find Kristen for Trask. Trask brings Gwen to the interrogation room to see Xander. She gives them 30 minutes alone. Gwen again urges Xander to save himself, but Xander vows not to abandon her. Besides, Victor has a deal in the works for their freedom. He lets her know he told Justin she’s not a sex worker, but he didn’t tell him the truth about her miscarriage. They’re the only ones who know. Trask sticks her head in. Time’s up. She steps away to take call. Xander assures a nervous Gwen everything will be okay.

Kristen sneaks in to see Rachel in her room, while Brady makes a call in another area of the penthouse. She embraces her daughter. After Rachel tells her mommy she went to pumpkin picking with Brady and Chloe, Kristen suggests they go on their own trip. 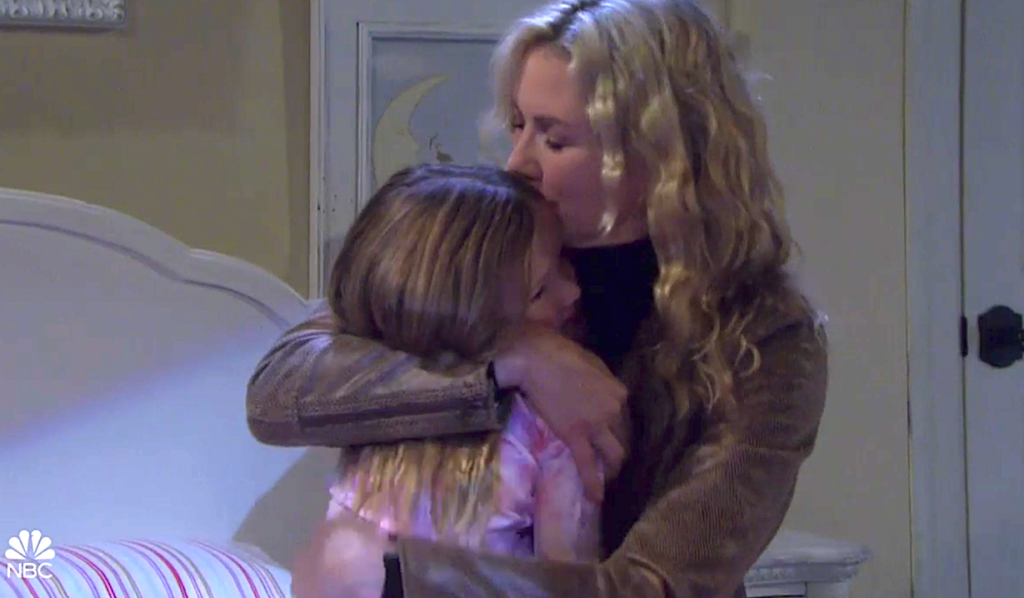 Philip visits Chloe in her Salem Inn room. She ignores a call from Brady, who leaves a message to warn her Philip saw them at the Salem Inn. After establishing they’re still a couple, Philip suggests they order the fried chicken from room service. As they eat, Philip wipes Chloe’s face and they kiss. Philip wants to get horizontal, but Chloe says she’s tired. She didn’t get a lot of sleep last night. Philip frowns and glances at her phone on the desk. He leaves, but looks back at the door pensively. Alone, Chloe listens to Brady’s message.

Kristen quietly leads Rachel through the living room. As she opens the front door, she sees Steve waiting in the hall. As Kristen tries to bypass Steve, Brady enters the room. He wonders what’s going on. Steve suggests he get his daughter back in bed. Brady leads the girl away, as Steve tells Kristen Victor hired him to find her. They can do this the hard way or the easy way. Kristen spits that the hard way is her stock in trade. 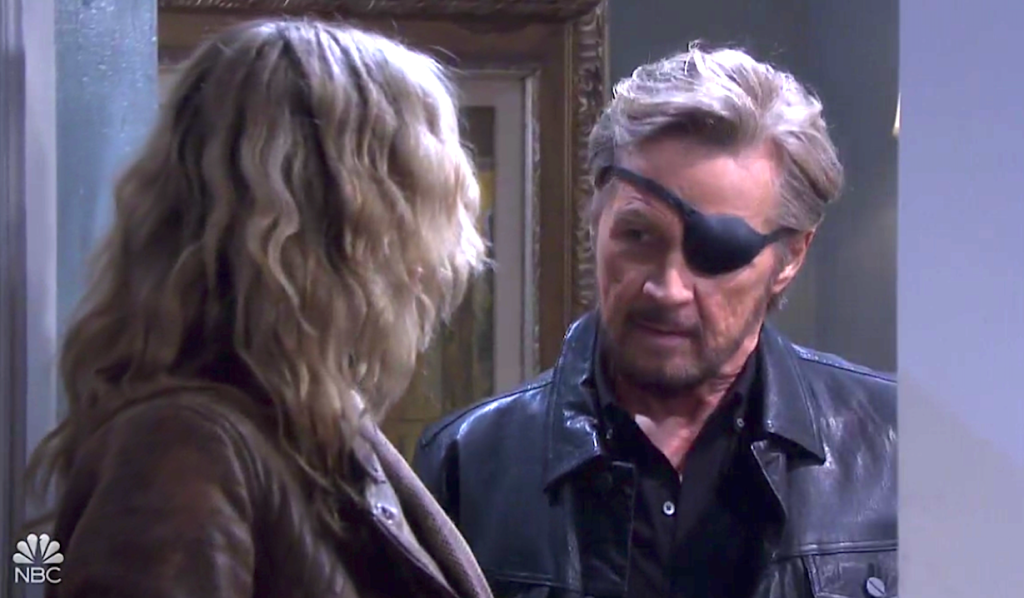 Brady returns as Steve handcuffs Kristen. Brady can’t believe Kristen is back to her “psycho” behavior. Kristen calls him cruel. Rachel is all she has and she misses her. She begs Brady to not let Steve take her away, informing him Victor is behind all this. She begs Brady not to let Victor separate her and Rachel again. Brady can’t believe she has the audacity to ask for his help. She wonders if this is about Chloe. She won’t let him replace her as Rachel’s mother. Steve drags her out.

Brady watches over Rachel as she sleeps. He vows to always be there for her.

Trask meets with Steve in the squad room. He says if she wants Kristen, she’ll have to drop the charges against Gwen and Bonnie too. EJ opens his door to Nicole. She’s there to take him up on his dinner invitation. He flashes to Kristen telling him his phone had been hacked. He welcomes Nicole in with a smirk. They eat pizza in the living room. She’s surprised dinner wasn’t more formal. EJ notes he likes being unpredictable. It keeps his enemies on their toes. He inches closer as he recounts their run-in with Steve and Kayla. Nicole looks him in the eye. “I admit it,” she says. “I let Steve hack into your phone.”

More: Soap stars and their changing looks in photos 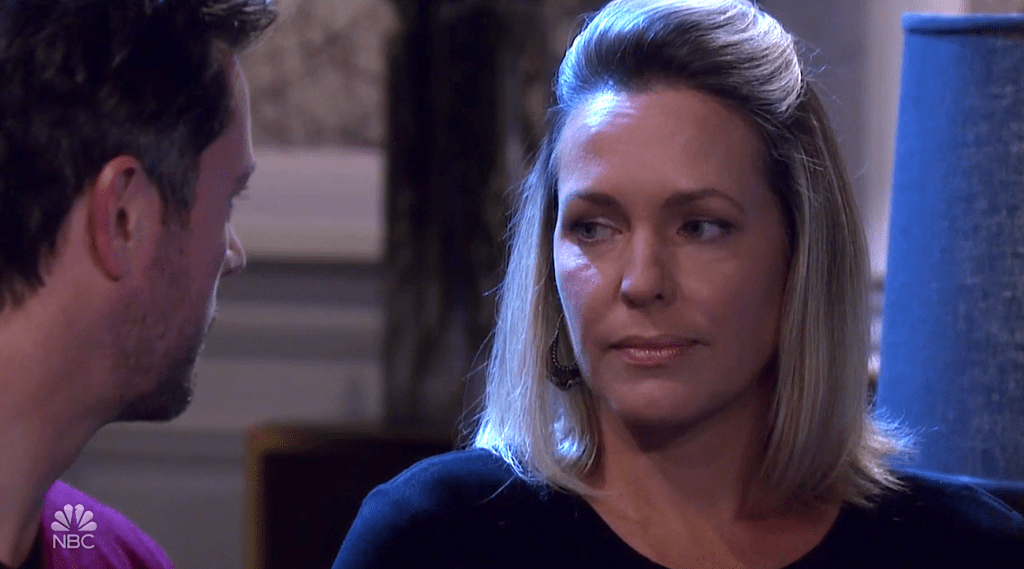 Nicole apologizes to an irate EJ, but reminds him of the terrible things his sister has done. EJ knows Kristen’s done horrific things, but she’s always looked out for him. Most recently by alerting him to Sami’s affair. Nicole points out he’s still wearing his wedding ring. EJ insists he can take it off whenever he wants. He pulls on it but it’s stuck. She takes his hand to help.

After Nicole gets EJ’s ring off, she gets up to leave. She thanks him for understanding about the phone. He knows it would be hypocritical of him to hold it against her. He asks if they can kiss and make up. He pulls her in for an intense lip-lock. She pulls away and leaves. EJ looks at his wedding ring.

Next on Days of Our Lives: Theo comes home, and Johnny, Allie and Chanel break out the Ouija board.

Will EJ and Nicole find love again? Revisit some of their rockier times by looking through our photo gallery of EJ’s questionable past in Salem below. 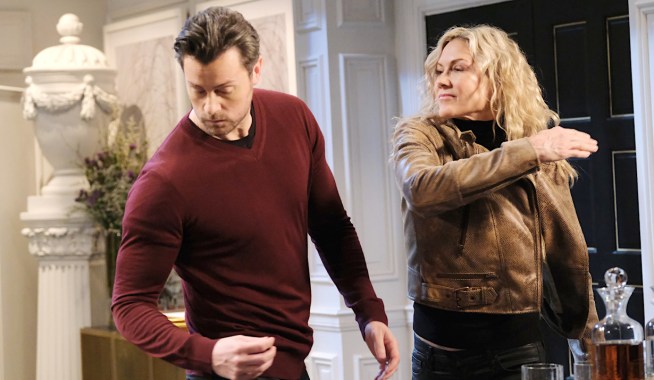 Johnny and Allie Receive Shocking Answers From a Ouija Board — Plus, Chad Explodes at EJ Over Abigail 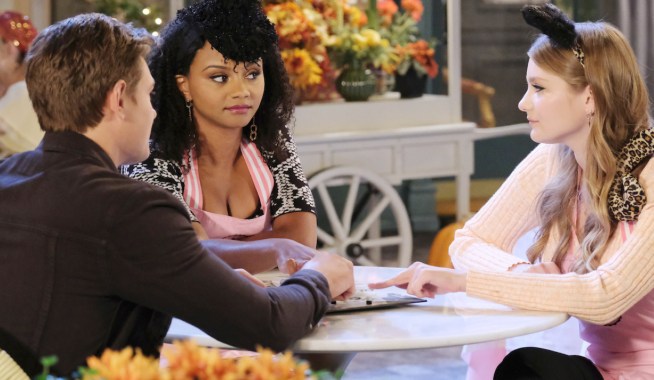