Gabi Confronts Jake About Being a Hitman After Philip Blackmails Her — Plus, Justin’s Attempt to Shake Down the Judge Fails Spectacularly

Thursday, October 7, 2021: Today on Days of Our Lives, Gwen and Xander's dreams are dashed, Philip threatens to turn Jake in for murder, and Chloe sets Brady straight. 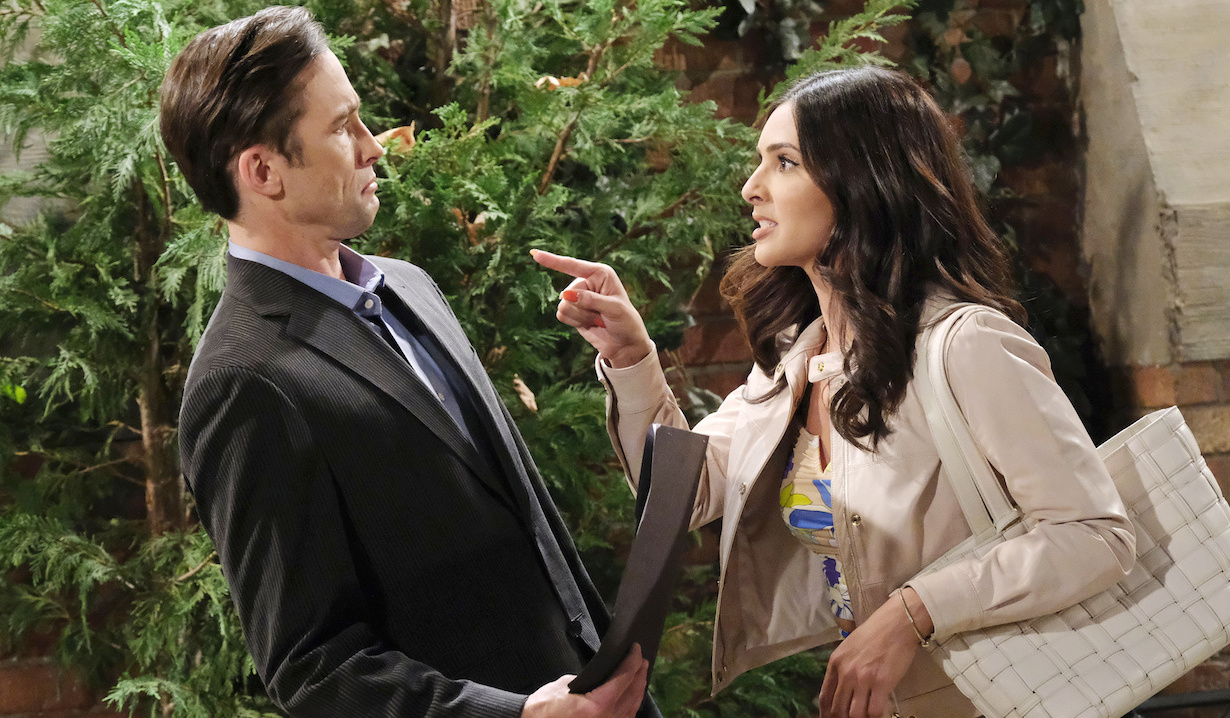 Xander and Gwen anticipate his freedom in the interrogation room. Xander assumes his cousin must really love Bonnie if he’s willing to fight this dirty. He tells Gwen that when he finally gets his million dollars back, he’ll take her on a tropical vacation. A place so exclusive, they won’t even see another person. He wants to go far away so they can get to know each other properly. She wants that too. Xander suggests they indulge in sex on the beach… and he’s not talking about the drink.

In Smails’ office, Justin tells the judge to make Bonnie’s and Xander’s charges go away. Or else, he’ll give Gwen’s recording to Jack who will share it with the world through The Spectator. Smails warns Justin he doesn’t want to do this. 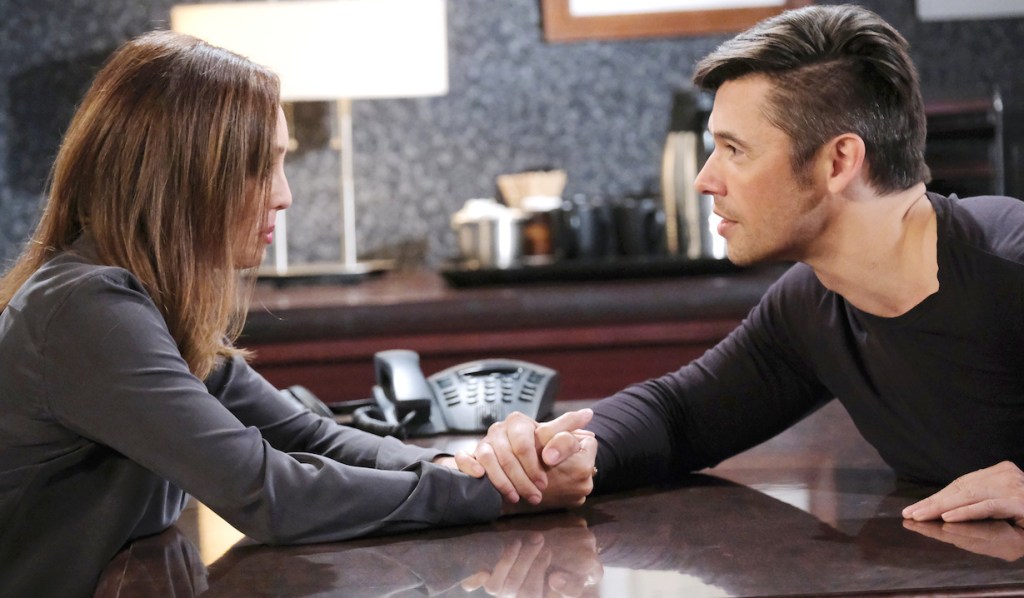 As Gwen and Xander look for island getaways on her phone, Justin enters the interrogation room. Trask follows. She announces Justin was arrested for blackmailing a judge. The D.A. explains Smails recorded Justin after consulting with her about Gwen’s visit. Not only will Justin be charged with blackmail, but Gwen with solicitation. Trask is disappointed in Justin. She thought he was one of the good guys.

After she leaves, Xander says, “I’m so sorry, mate.” Justin knew how risky the plan was, but he was operating out of fear. Fear of not getting Bonnie off on her charges. Trask returns for Justin. She’ll be back for the other two. Alone again, Gwen says for the first time in her life she was feeling positive for her future, but now, they’re going to lose everything. Xander reminds her they’ve been down before and they always find a way to get back up. Trask returns for Gwen. 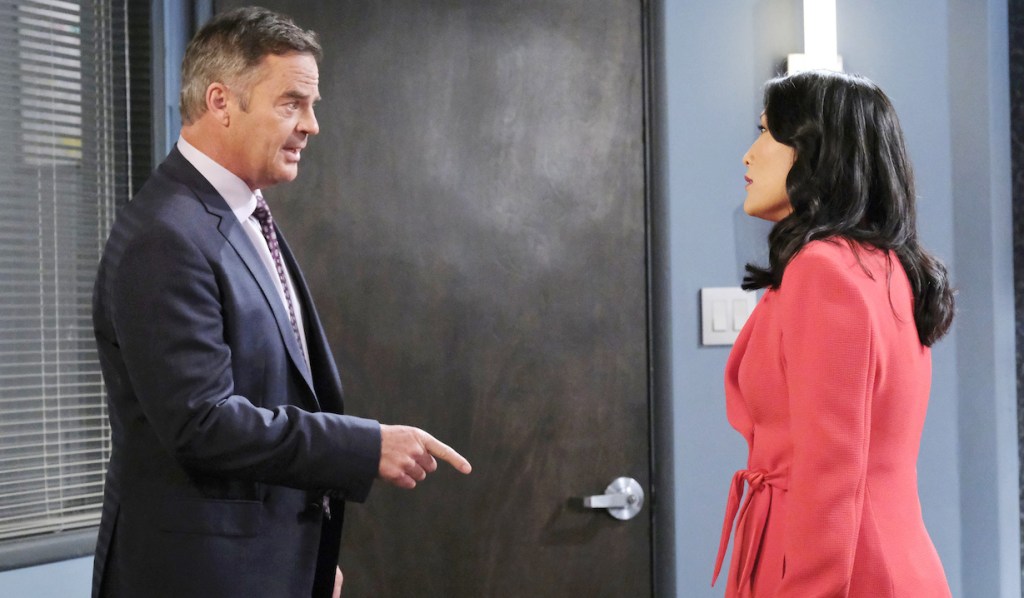 At the Kiriakis mansion, Brady gets a call from John who can no longer take Rachel to the pumpkin patch. After hanging up, Brady asks Chloe if she’d like to go with him and his daughter. She says she has work to do, but Brady wonders if she’s really just worried about what Philip will think. Chloe rolls her eyes, assuring him Philip is over his jealousy. Why won’t he let it go? Brady starts over. He extends a genuine offer for Chloe to join him and Rachel, who could probably use some female energy around her. Chloe doesn’t think Philip would have a problem if it involves Rachel, and besides, she can water her and Philip’s tree.

In the Square, Jake wonders to Ava why she’s acting so sweet to Gabi all of a sudden. Ava says she’s just trying to change the dynamic between them. Her muffins were a peace offering. Jake is skeptical, but says they all have to find a way to peacefully co-exist. He compares their situation to a mob conflict. He suggests a good old-fashioned sit down between warring parties to figure out how to make peace. Ava thinks that’s a fabulous idea. She smirks as she walks away. 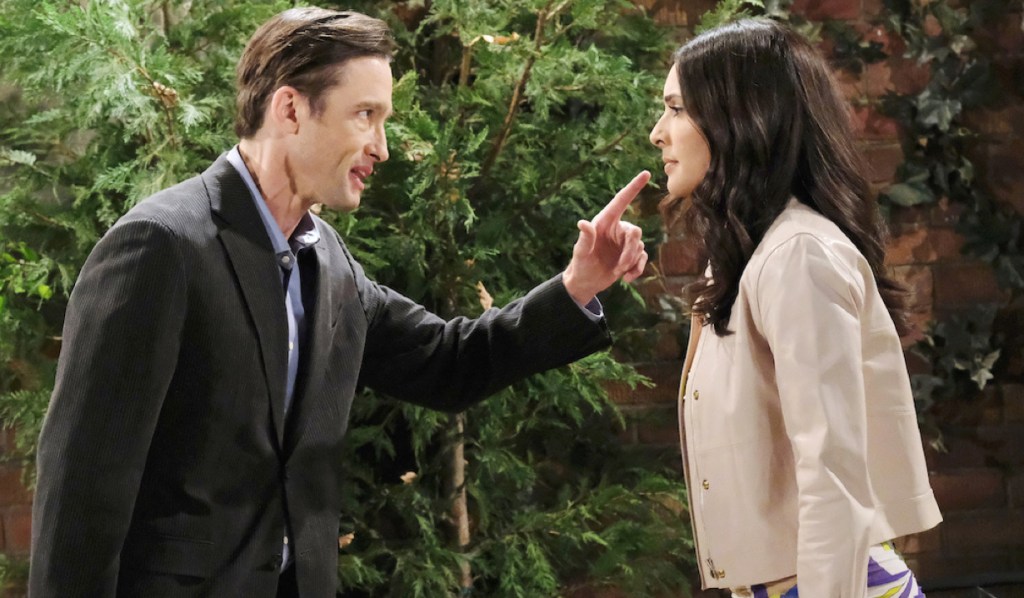 In the park, Gabi insists to Philip that Jake never killed anyone. “The proof is all right there,” he says pointing to the folder Ava gave him, “that your decent boyfriend was a hitman.” Philip tells her about a man Jake roughed up so badly, he killed him and dumped his body off the Jersey Shore. There’s even an eye-witness. Gabi grabs the folder out of Philip’s hands. Gabi still doesn’t believe it and then realizes Ava must have given him the info. Philip denies it. He lies that he got it from a Titan background check. Philip says he’ll keep quiet if she signs Gabi Chic over to him. If she doesn’t, he’ll send the evidence to the Philly police. As she rails at him, she detects his aftershave. She recalls smelling it at her house which proves he is plotting with Ava. He again denies it. He suggests Gabi show Jake the evidence and then decide what she wants to do.

After the pumpkin patch, Brady begrudgingly goes along with Chloe’s plan to water her and Philip’s tree. He further upsets Chloe by badmouthing Philip in front of Rachel. Chloe asks him to try harder with his uncle or their friendship will suffer. Brady relents. He thinks maybe Philip has changed his ways and accepts that she has chosen Philip. He hopes they are happy together. She thanks him with a hug. Philip peers through the trees and scowls.

Gabi marches up to Jake in the Square. She demands to know, “Did you kill Jed Zanetti?”

Next on Days of Our Lives: Philip accuses Chloe of betrayal, and Maggie and Ciara try to comfort Julie.

Relive Camila Banus’ most memorable moments as Gabi in the photo gallery below.

Xander Urges Justin to Tap Into His...