Ava Makes a Deal With Philip That Is Sure to Make Gabi’s Head Explode — Plus, Xander and Gwen Make Things Official While Plotting His Freedom

Wednesday, September 29, 2021: Today on Days of Our Lives, Ava makes a demand of Philip, Brady warns Nicole about EJ, Abigail is skeptical, and Xander and Gwen find time for romance. 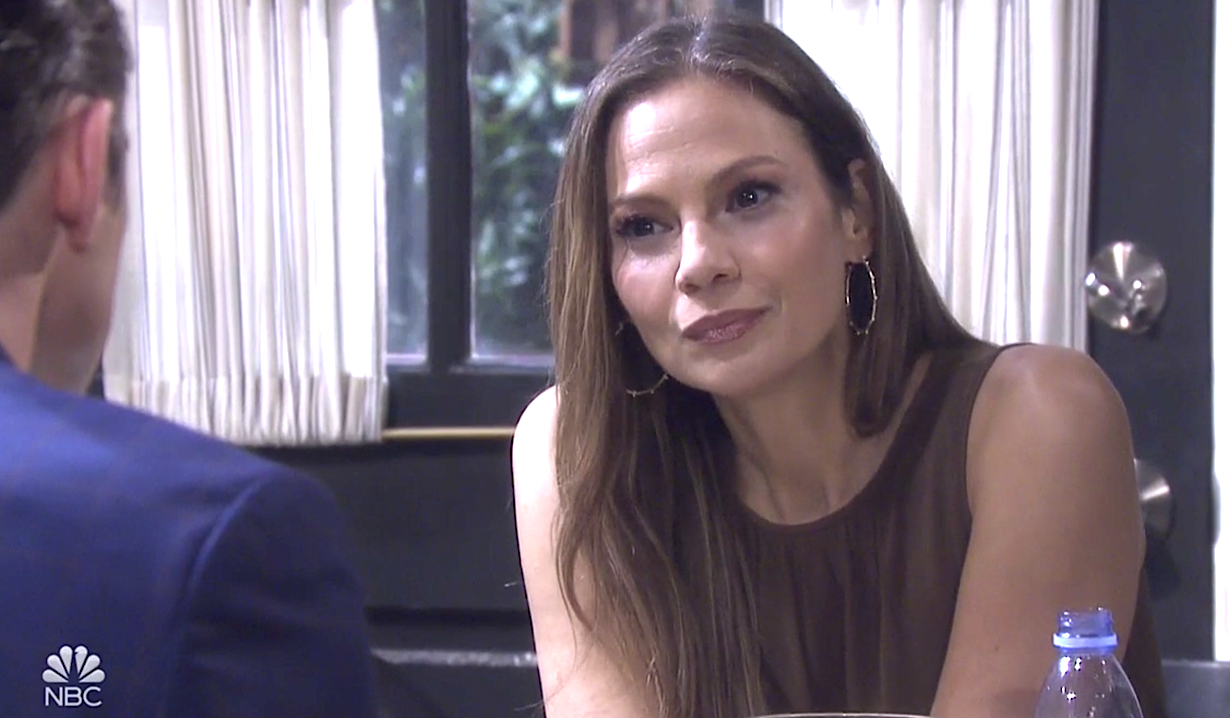 Jack brings kites to the DiMera mansion for Thomas and Charlotte. After an awkward hello, Abigail thanks him and asks him to stay. She brings up his article on Xander. Jack feels bad about it especially since his buddy’s innocent. When Abigail expresses skepticism, Jack explains Xander was just covering for Gwen. Abigail calls that a match made somewhere other than heaven. Jack recounts Gwen’s story that Snyder was blackmailing her over being a sex worker. After processing the coincidence of Gwen’s client turning out to be her doctor, Abigail tells her father that she apologized to Gwen about the miscarriage. Jack comforts her when she blames herself for what happened. He urges her to forgive herself. After a moment, Abigail questions Gwen choosing to commit more crimes rather than admit she was a sex worker.

More: How will Johnny’s movie affect Chad and Abby? 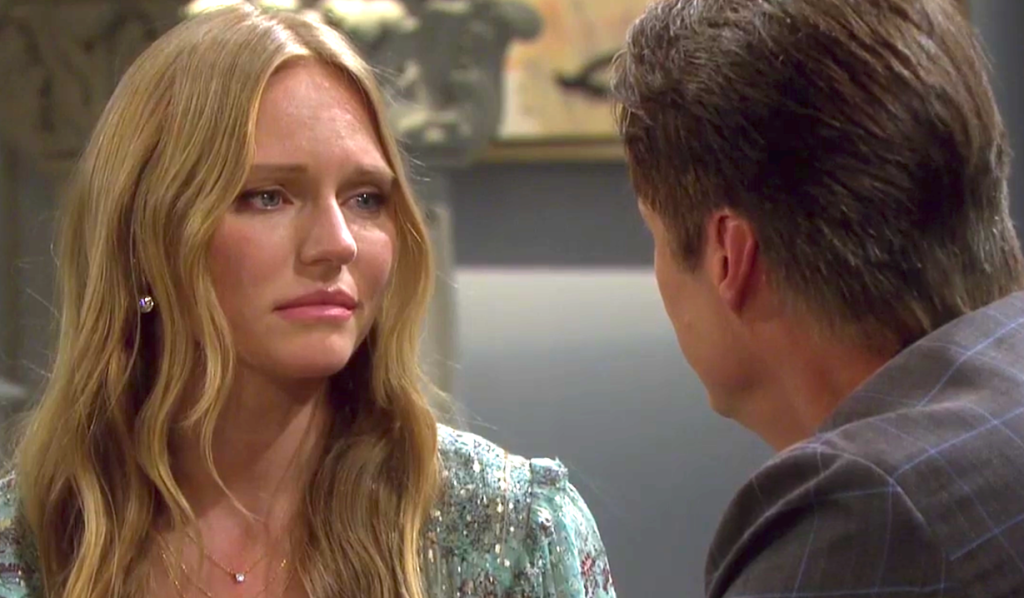 In the interrogation room, Gwen offers to ask Jake to lean on the judge until he lets Xander go free. After some consideration, Xander suggests they dispense with the violence angle. Gwen’s next idea is to blackmail him by pretending to be a sex worker. Xander is incensed at the thought, but also wonders how she’d go about it. She says she’d offer him sex in exchange for letting her boyfriend go. He asks if he is her boyfriend. She says, “I don’t know, are you?” He smirks, “Yeah. I guess I am.” They kiss.

With that’s settled, Xander puts the kibosh on Gwen seducing another man. Gwen scoffs. She’s not going to have sex with him. She’s just going to record him agreeing to the trade and then blackmail him. Xander thinks that makes more sense, but calls it dangerous. So, still no. Gwen begs him to let her help him. Xander is touched that she’s willing to do this for him. Gwen says he’s the first man who actually means something to her. She’ll be damned if she lets him go to prison. Xander never thought anyone else would have him after Sarah. Gwen calls them the town’s pariahs, so it makes sense they’re together. Xander agrees that they make a lot of sense. Gwen says it’s settled then. She’ll blackmail the judge and Xander can tell EJ to go to hell.

More: Big returns could be on their way to Salem 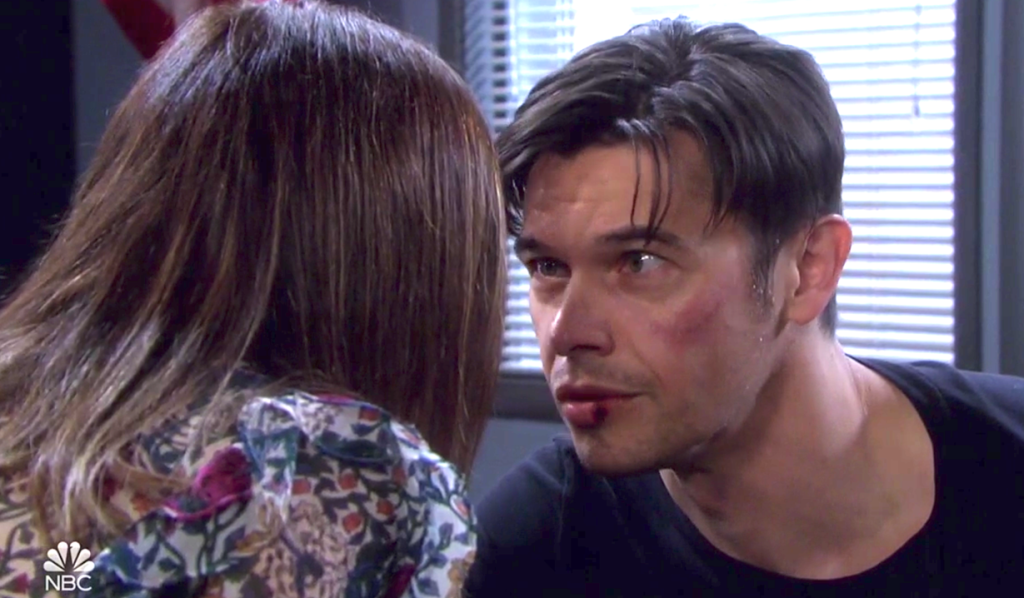 More: Why you should watch The Big Leap

In the Square, Gabi rants to Jake about Ava. She’s not convinced Ava is completely out of her former business. Gabi wonders if he knows someone who could rub her out. Jake stiffens. He can’t believe she’d even suggest such a thing. He doesn’t want to think about his past and the crap the Vitali’s had him do. Gabi asks for details, like did he kill anyone? He explains he was just an enforcer, but he worries they’d be tempting fate if they dip a toe back into that world.

At Rafe’s, Philip asks Ava to gather more intel on Gabi and Jake since she lives with them. She tells him to go fly a kite, but then reconsiders, wondering what’s in it for her. She informs Philip that Jake used to work for her cousin Angelo, who might have evidence that could send Jake away for a long time. Philip’s eyes light up. He thinks Gabi might trade Gabi Chic for Jake’s freedom. Ava won’t get the goods until Philip puts her in charge of Gabi Chic. She also wants to change the name to Ava Chic. Philip doesn’t think he can make that pitch to the board members or his father. Ava says no deal then. Philip relents and says, “Ava Chic it is.” After they shake on it, Ava calls and leaves a message for Angelo.

More: Photos of Santa Barbara stars, then and now More: Soap characters who should have sizzled, but fizzled

Nicole is shocked when EJ asks her out. He chuckles as they discuss their rocky past. Brady and Chloe enter Basic Black as EJ re-extends his dinner date offer. Brady says, “Please tell me you’re too smart to say yes to that question.” After Brady and EJ trade barbs, Nicole asks Brady not to make a big deal out of this. He reminds her of what EJ is capable of, but Nicole hasn’t forgotten. EJ gets in digs about Brady moving on from Kristen to Chloe. After more bickering, Brady and Chloe leave.

EJ returns to the matter at hand which is dinner with Nicole. She’s not sure she’s ready for that. Also, she wonders if he’s just trying to stick it to Sami. EJ denies it, but assumes Nicole would enjoy sticking it to Samantha as much as he would. Nicole agrees to a date as Brady and Chloe return. EJ leaves. Brady says, “Don’t say I didn’t warn you when it blows up in your face.”

Next on Days of Our Lives: EJ and Lucas have a run-in, and Allie talks to Chanel about Tripp.

Who do you think Nicole should be with? Let our photo gallery below of five potential love interests for Nicole help you decide.

Gabi Zeroes in On Philip's Achilles'...