Wednesday, August 25, 2021: Today on Days of Our Lives, Brady suggests a trip with Chloe, Roman leaves Nicole devastated, and Ava confronts Rafe about his feelings. 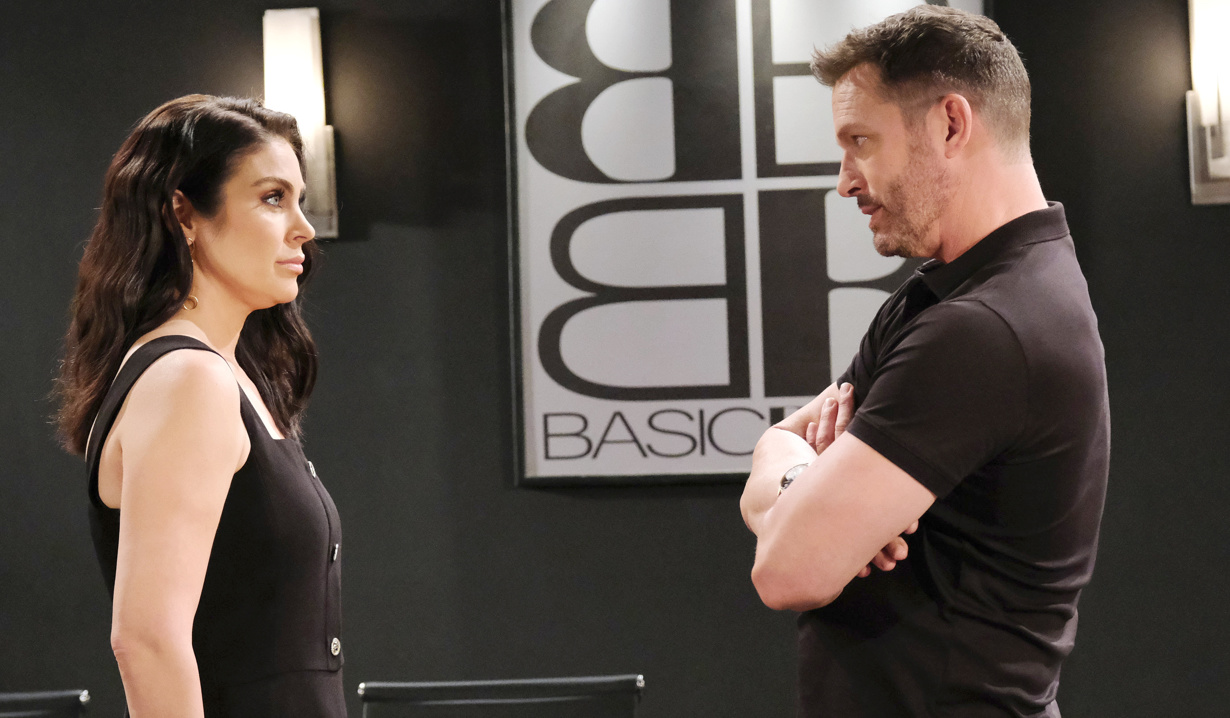 Jake wakes up to Gabi in bed tracking Philip’s emails on her computer. She reads one he writes in real-time about a serious issue. She freaks out when he suddenly stops typing.

Kate enters Philip’s office causing him to shut his laptop. She warns her son that Jake and Gabi will stab him in the back if he hires the former. Philip calls her paranoid but reminds her he’s using them, not the other way around. She suggests he pump Chloe for information on DiMera. Philip would never do that. However, he did offer her a job but she turned him down. Kate assumes he was just trying to get her away from Brady. Philip isn’t worried about his nephew. It’s only a matter of time before Chloe is really, truly his. Kate warns him about Jake again before leaving.

More: Returns and intrigue in Beyond Salem promo 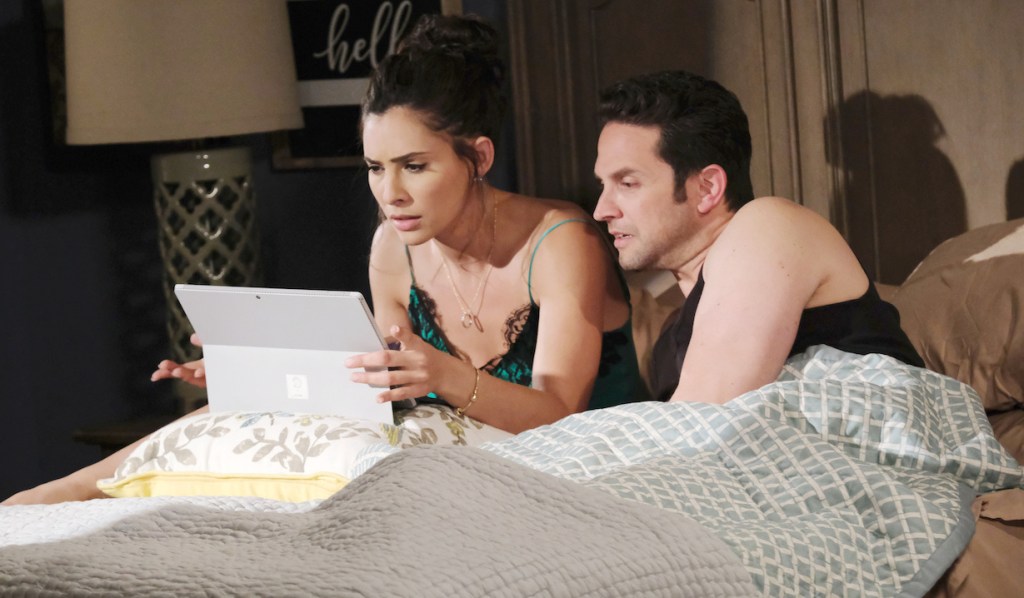 Back in their bedroom, Gabi muses Philip could be gambling again or something even worse, which could be the key to kicking him out of Titan. Jake tries to distract her with sex but she doesn’t want to miss anything important. After he kisses her neck, she agrees to put the laptop aside while they wait for more intel. She kisses him and they fall back on the bed.

After sex, Gabi immediately gets back to operation oust Philip. She reminds Jake of his interview with Philip and offers to give him some tips to help him land the job.

When Rafe comes to the kitchen looking for breakfast, Ava throws a breakfast bar at him. She decided not to cook in case he had plans with Nicole. Rafe defends his running to Nicole’s side in her time of need but Ava points out Nicole ruined her marriage all by herself. They heatedly debate the issue until Ava yells for him to admit he wants to sleep with Nicole, as Jake and Gabi enter the room. Gabi taunts Ava that she tried to warn her before Jake ushers her out. Rafe asks Ava what his sister warned her about. Ava says, “Your feelings for Nicole.” Rafe can’t believe she fell for Gabi’s mind games. Ava knows what she’s seen and thinks he should stop denying he wants to be with Nicole. She storms out.

Jake meets with Philip at Titan. Philip tells him Kate suggested he and Gabi are trying to take him down. “Is she right about that?” he asks. Jake says Kate is just lashing out. Plus, Kate is probably worried he’ll take down DiMera with all that she taught him while he was CEO. Philip can’t shake his mother’s concerns so Jake thanks him for his time and walks out.

More: Linsey Godfrey opens up about her nervous breakdown 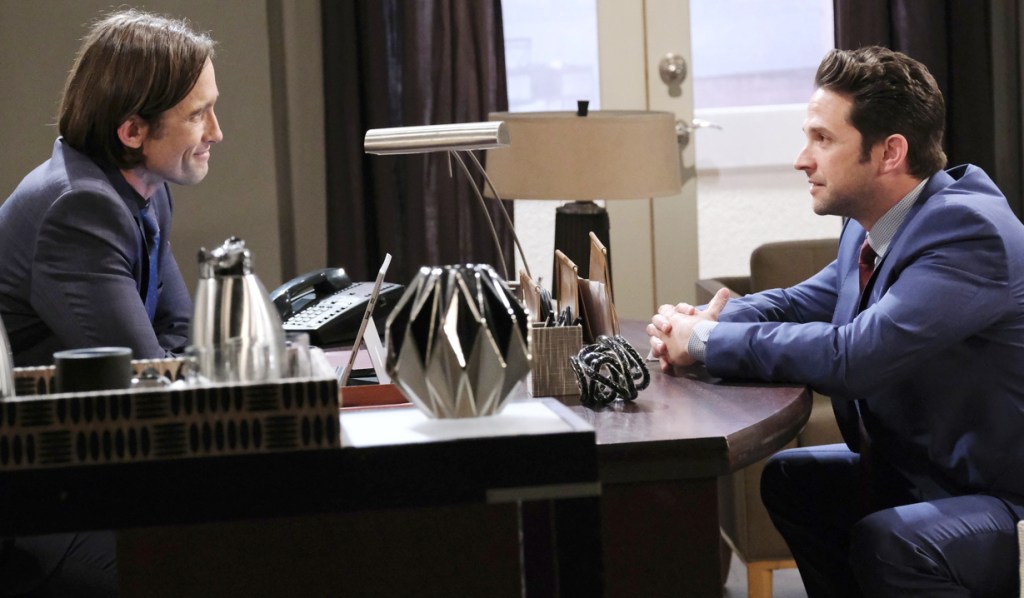 Nicole stops by Brady’s Pub to see Roman. She tells him how sorry she is about what happened at her and Eric’s party. He says, “You should be.” She defends herself but he thinks if she’d been honest from the very beginning she could have spared all of them a lot of pain. Nicole doesn’t blame Eric for her infidelity but notes he took responsibility for leaving her. She tells them they mutually decided they are better off apart. Roman doesn’t care how amicably they parted. Eric never loved anyone the way he loved her and will never be the same. The pain will haunt him. In tears, Nicole agrees she’s a terrible person and deserves to live in misery for the rest of her life. She runs out.

When Chloe comes to work, Brady tells her he’s whisking her away to New York. A new distributor wants a face-to-face meeting today. Plus, she’ll get to see her family. Chloe doesn’t think Philip will like the idea. Brady calls that Philip’s problem. Chloe says she still has to take Philip’s feelings into account. Besides, Nicole can go to the meeting. She does wonder if the real reason he wants her to go on the trip is to spend time alone with her. They’re interrupted by a call from Nicole who says she’s not coming to the office. In fact, she’s taking the rest of the week off. After hanging up, Brady tells Chloe with Nicole out, she has no choice but to go to the meeting with him.

More: Heartbreak in store for Abe and Lani?

Gabi finds Nicole outside the Pub. Nicole confides that the town thinks she’s a monster. Gabi corrects her — not Rafe. In fact, he’d be grateful if she went over to his place and leaned on him right now.

Later, Gabi finds Ava sitting outside in the Square. She taunts her about Nicole being available as Nicole visits Rafe at home. 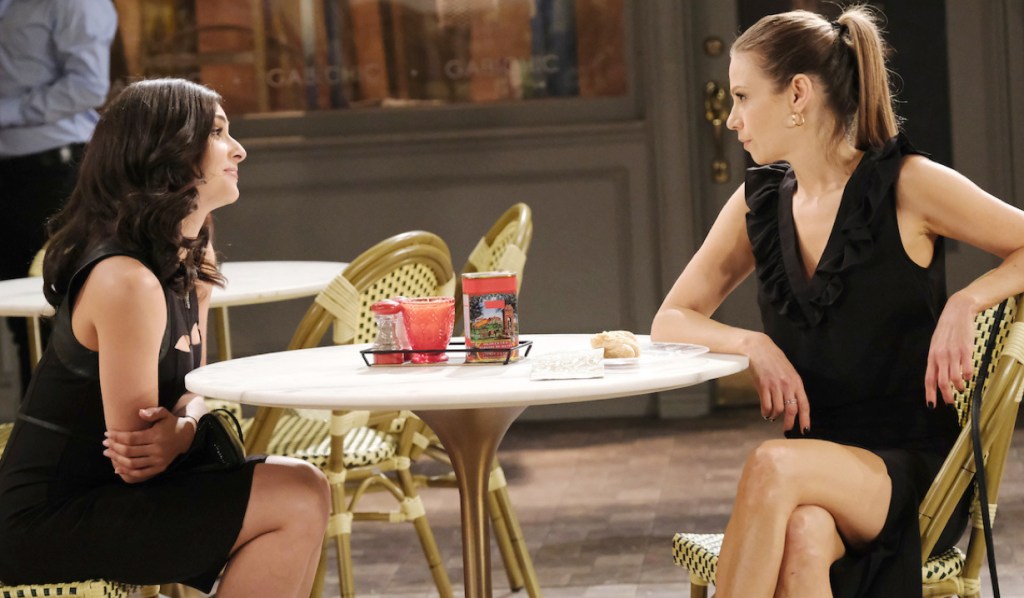 Next on Days of Our Lives: Philip’s none too pleased with Chloe’s plans, and Nicole realizes she’s the problem.

Take a look through our photo gallery of Brady’s life and loves and then get your free daily soap-opera fix for Days of Our Lives — and all of the other daytime dramas — delivered straight to your email inbox by signing up for Soaps.com’s newsletter.

<p>Fearing that Brady, catnip that he is, might get back together with Chloe, Kristen swapped places with lookalike Susan Banks and began taking one desperate measure (bye, Sarah Horton) after another (“Now I’m Kate Roberts!”) in order to micromanage her boo’s love life. And by “micromanage,” we of course mean “ensure that she’s the only woman in.”</p>

Nicole Makes a Sacrifice for Ava Who...