Tuesday, June 22, 2021: Today on Days of Our Lives, Xander takes care of Gwen's problem, Nicole confesses everything to Brady, and Philip offers Chloe a job and a relationship. 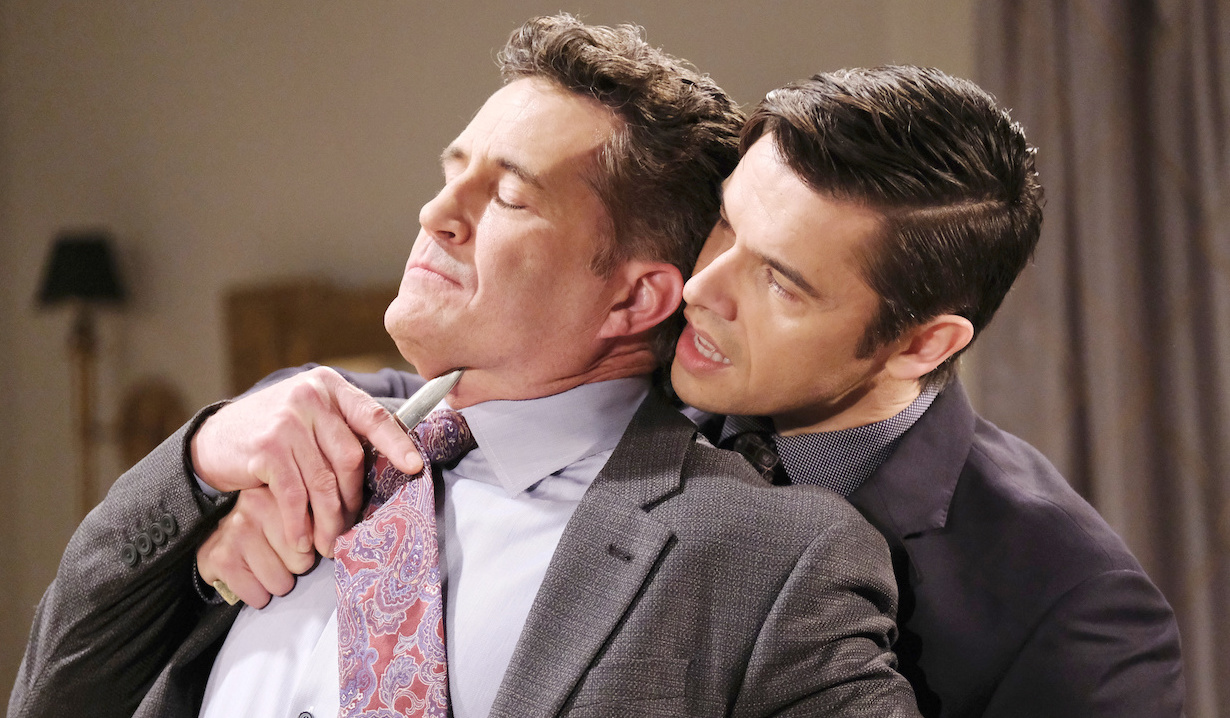 Gwen calls Dr. Snyder from home to assure him she delivered his package. He says he’ll be by later with another one. She hangs up, exasperated, as Jack enters. He assumes she’s upset because of Xander. Gwen admits Xander’s caveman-like behavior drives her crazy and wonders why Jack puts up with him. Jack recounts Xander’s heartbreak over Sarah and how his very large family doesn’t embrace him. Jack thinks his bravado just hides how much he’s hurting. All he wants is to be accepted and loved. Jack suggests that she might be able to relate to that and give him a chance.

After hanging up with Gwen, Dr. Snyder turns to find Tripp who asks him about missing pills. Snyder gives a “simple” explanation for it, but says he’s impressed with the catch. 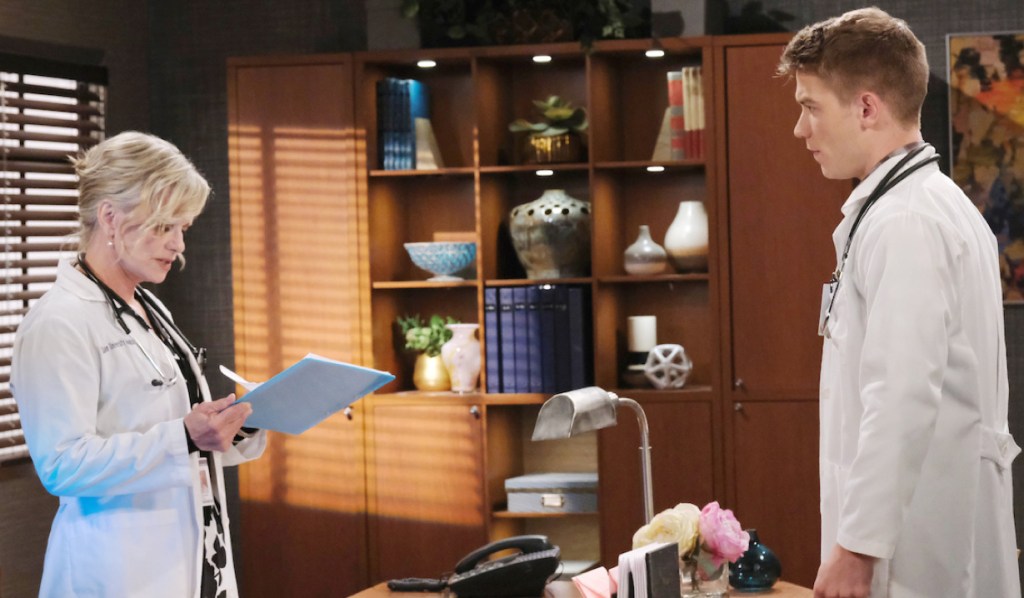 Steve arrives at the hospital for his lunch date with Kayla while she reviews Gwen’s medical chart. Steve wonders what she’s looking for. Kayla catches him up on Dr. Snyder, leading Steve to agree it sounds like he and Gwen are hiding something. When Tripp shows up, Steve leaves to get a table at Julie’s Place. Tripp asks Kayla for a second opinion about the missing drugs. Kayla agrees with Tripp that there’s an issue and says she’ll handle it.

Kayla meets with Steve at Julie’s Place and tells him her belief Snyder is stealing drugs from the hospital. Steve wonders if it has anything to do with Gwen. Jack walks up and says, “What about Gwen?” 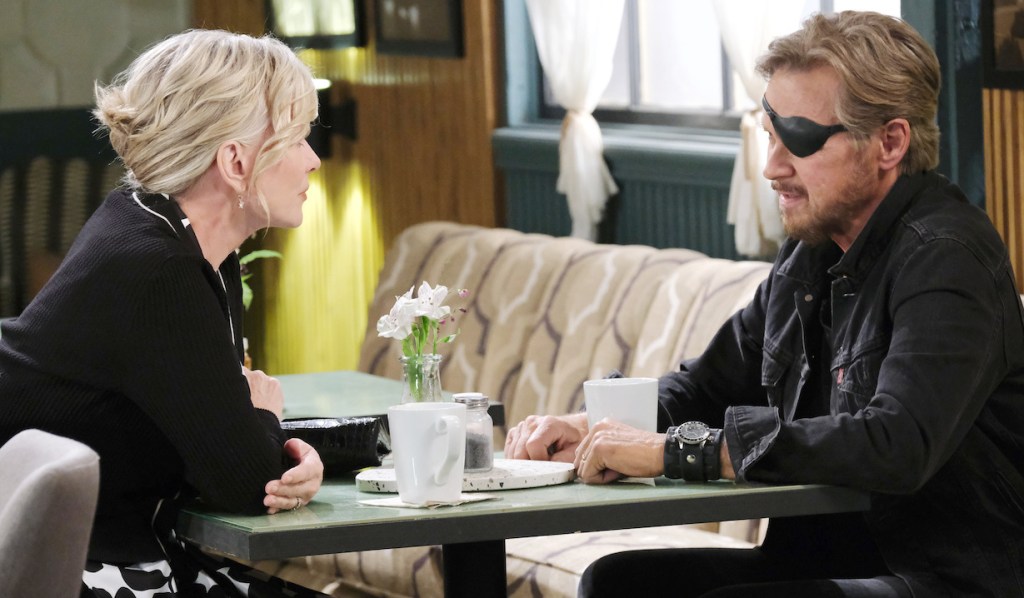 Brady enters Basic Black as Xander talks to Nicole about their night of scorching hot sex. When they notice him, Brady just updates them on Chloe staying with Philip. Xander can’t believe he’d let her figuratively sleep with the enemy and suggests they fire her. Neither Brady nor Nicole will hear of it, reminding him it’s not his place to make such decisions. Tired of Xander already, Brady suggests he take the rest of the day off.

After Xander leaves, Brady asks Nicole if she slept with Xander. He overheard what Xander said. Nicole confesses she cheated on Eric and that she hired Xander so he wouldn’t tell Sami. Brady offers to help her. She cries as she talks about Eric being away and how she can’t understand why she cheated with Xander. He suggests she was just being self-destructive. Nicole knows she’s not just hurting herself though. She’s hurting Eric too and she doesn’t think he’ll get past it. Nicole asks if Brady will tell his brother. Brady assures her he won’t say anything and suggests they neutralize Xander.

More: Eric Martsolf mourns the death of his father 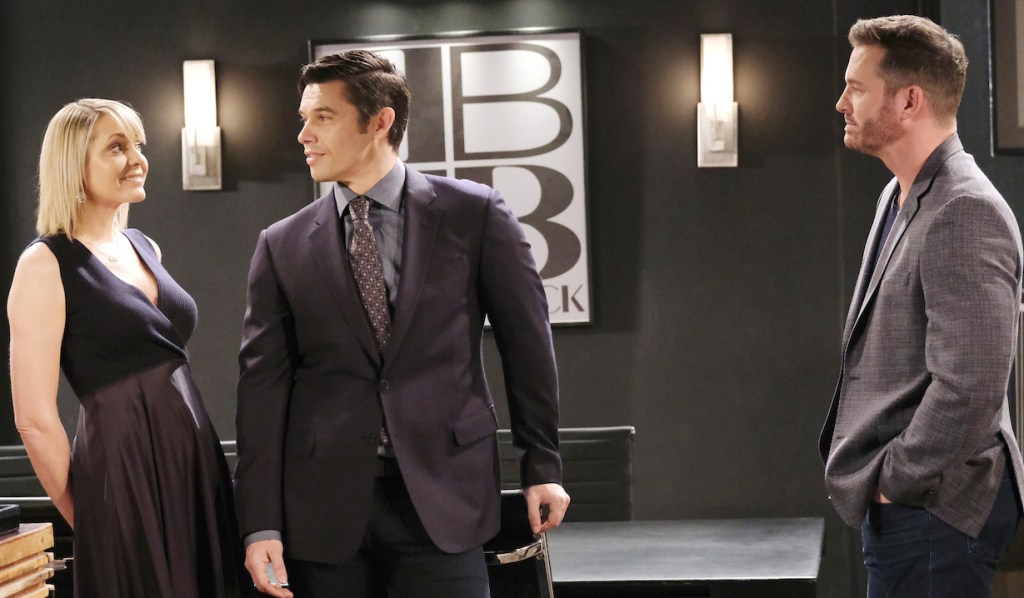 Jack runs into Xander in the Square. Xander tells Jack how grateful he is to him and assures him he has his back as well. Xander flashes back to his conversation with Gwen about the pills and says they need to talk about his daughter. Jack knows Gwen is a difficult person, but she felt abandoned her whole life. He asks Xander to give her a chance for his sake and then rushes off to work.

When Dr. Snyder arrives at the Horton House, he warns Gwen that Kayla is snooping around her chart, but he covered her lie about her miscarriage. Gwen thinks that means the leverage he has over her is gone. If she’s exposed, he’ll be exposed, so they should call it even. Dr. Snyder resists and grabs Gwen, as Xander enters. Gwen and Snyder both tell him to leave, but Xander grabs Snyder and holds a letter opener to his throat. Snyder asks him to stop, but Xander warns he lost the only person that could stop him from crossing a line like this. He has no reason to be good anymore. Therefore, he’ll see him in hell. Gwen yells for him to stop. She doesn’t want Xander to murder anyone. Besides, Xander has Jack to be better for. Xander lets Snyder go, but Snyder grabs his chest and falls to the couch. Gwen feels for a pulse. “Oh my god,” she says. “He’s dead.”

More: The Last Blast Crew story we’d like to see 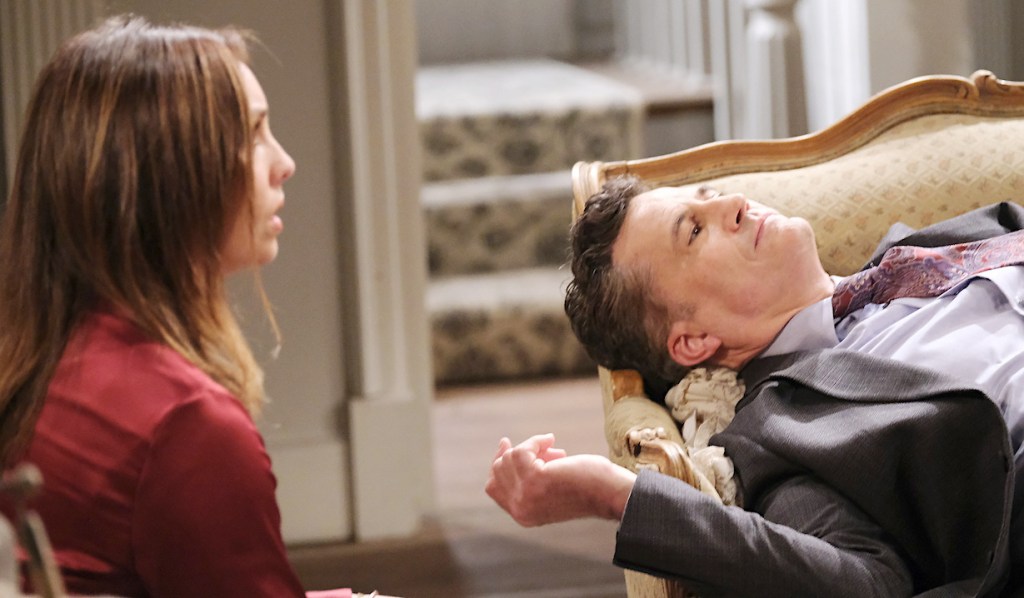 After Philip gives Chloe a back rub at the Kiriakis mansion, he invites her to leave Basic Black and work for him at Titan. She wonders what she’d even do for him. Philip offers her the position of Senior V.P. of Gabi Chic. Chloe thinks Gabi comes with too much baggage, including their own shared history with Stefan. Philip reminds her she’s got drama over at Basic Black with Brady too. He doesn’t think either man was good enough for her though, but he is. She asks if he is offering her a job or a relationship. He says, “Both.” Chloe tells him she’s happy at Basic Black and Parker is the only one who has her heart. Philip says he can change that when she leaves to talk to her son.

Next on Days of Our Lives: Paulina shocks Lani, and Chanel and Allie seeks Julie’s approval.

Relive Philip and Chloe love story in our photo gallery below. Then get your free daily soap-opera fix for Days of Our Lives — and all of the other daytime dramas — delivered straight to your email inbox by signing up for Soaps.com’s newsletter.

An Already Suspicious Brady Walks in...

An Irate Julie and a Surprised Jack...