Monday, June 21, 2021: Today on Days of Our Lives, Xander suggests he and Nicole get the goods on Sami, Kate lays the guilt on thick, and Sami confides in Gabi. 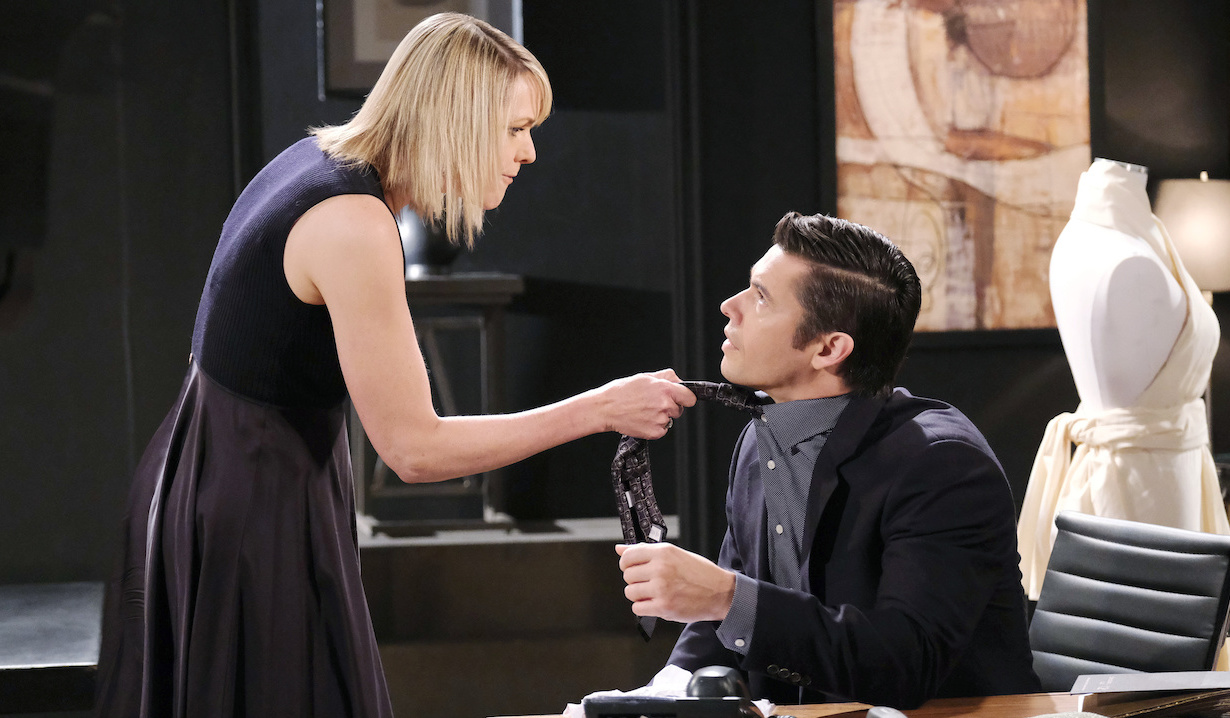 Philip brings Chloe breakfast as she recuperates at the Kiriakis mansion. She says she could get used to this, which is what Philip is hoping for. Brady enters to talk business with Chloe. When Philip leaves them to it, Brady tells a shocked Chloe that Nicole hired Xander. Philip eavesdrops as Brady shares his theory that Xander is strongarming Nicole. He asks her to come back to the office to try and figure it out. Philip returns to give Chloe her medication. He suggests Brady see himself out. After some back and forth between the men, Brady leaves. Philip tells Chloe it feels like Brady is trying to drag her into something and he won’t let that happen. Chloe accuses him of eavesdropping. Philip grins and admits it. He tells Chloe she can work for him instead of working with Xander. 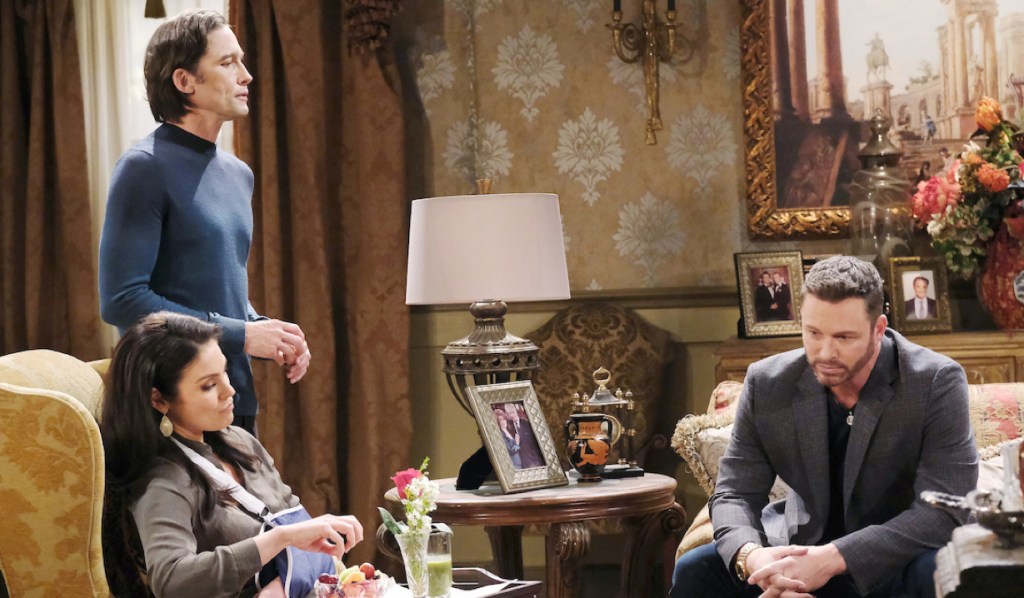 Nicole enters the Basic Back office to find Xander reading a Playpen magazine. He says it’s research. As they bicker, Nicole warns Xander Sami is on to her, which should worry him considering he’ll be out of a job if the truth comes out. Xander suggests they find out if Sami is cheating on her own husband. He points out he felt tension between Sami and Lucas when he found them in the DiMera basement. Perhaps of the sexual variety? Nicole admits it’s possible, but she doesn’t believe they slept together. Xander says they start with the hypothesis and then gather evidence to support it. When Nicole continues to worry about Sami, he reminds her that Sami doesn’t have any proof that they had a night of scorching hot sex behind her husband’s back. Brady walks in. 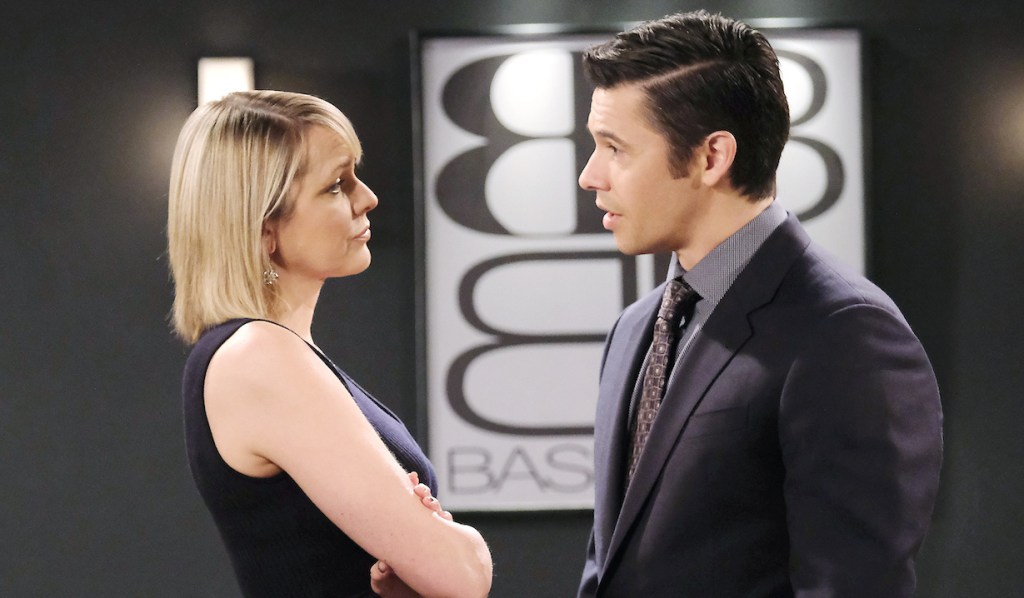 In their bedroom, Jake backs away from Kate who wants to have sex. She wonders if it’s about Gabi. Jake lies that what he and Gabi had is in the past. Jake looks guilty as Kate tells him she loves him. She asks, “Isn’t that how you feel?” He fidgets as he says it is. However, he thinks she should get some rest and he’ll bring her breakfast. She asks him to hold her first. Jake looks uncomfortable as Kate brings him down on the bed with her.

In the DiMera foyer, Sami covers with EJ who overhears her and Lucas talking about their secret. She says Lucas wants to stay in the mansion for Kate, but she worries EJ’d be uncomfortable with that. EJ assures her he’s not threatened by her ex. As far as he’s concerned, Lucas can stay. Panicked, Sami insists the house is too full. EJ believes they can make room, but Lucas assures them he’ll be fine at the Pub. EJ kisses Sami before leaving to talk with Chad. 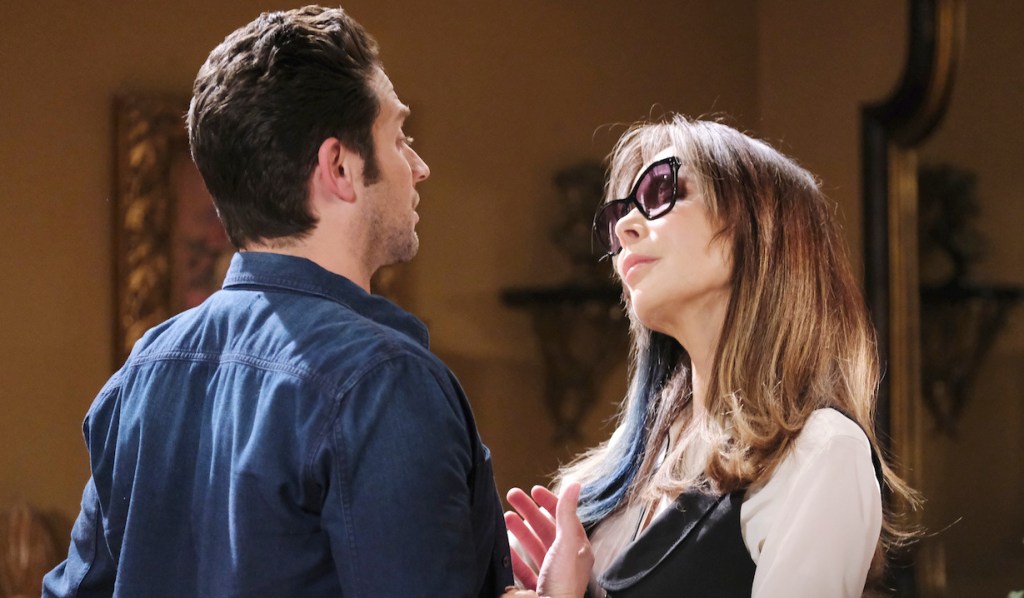 Gabi stomps into the DiMera living room venting about Kate moving into Jake’s bedroom. Chad flashes back to Kate lying about her blindness and grins as he warns Jake and Kate could be getting close behind closed doors. Gabi’s not worried about Jake cheating on her, but thinks Kate needs to get her own room. Chad muses that could be tough considering Sami and EJ just moved back in.

EJ enters the living room as Gabi wonders how EJ could move in without asking for her permission. EJ declares because it was his home long before it was hers. However, he apologizes and asks if she’d see fit to allow him and Sami to stay. Gabi relents and then gushes about how impressed he’ll be with Jake. EJ just needs to talk to Chad right now, so Gabi leaves. Alone, EJ asks Chad what he’s decided about his plan against Jake.

Back in the foyer, Sami insists to Lucas that she loves EJ and is going to make it work with him. Lucas declares they both know he is better for her than EJ is and heads upstairs to check on his mother.

Alone on the stairs, Sami thinks about her tryst with Lucas. Gabi finds her and offers to listen if Sami ever needs to talk. Sami opens up about how hard EJ’s recovery was. Now, being back in Salem is making it hard to work on their marriage. Gabi says at least she is with the man she loves, which leads them to discuss the situation with Kate and Jake. After getting worked up, Gabi runs upstairs to check on them. 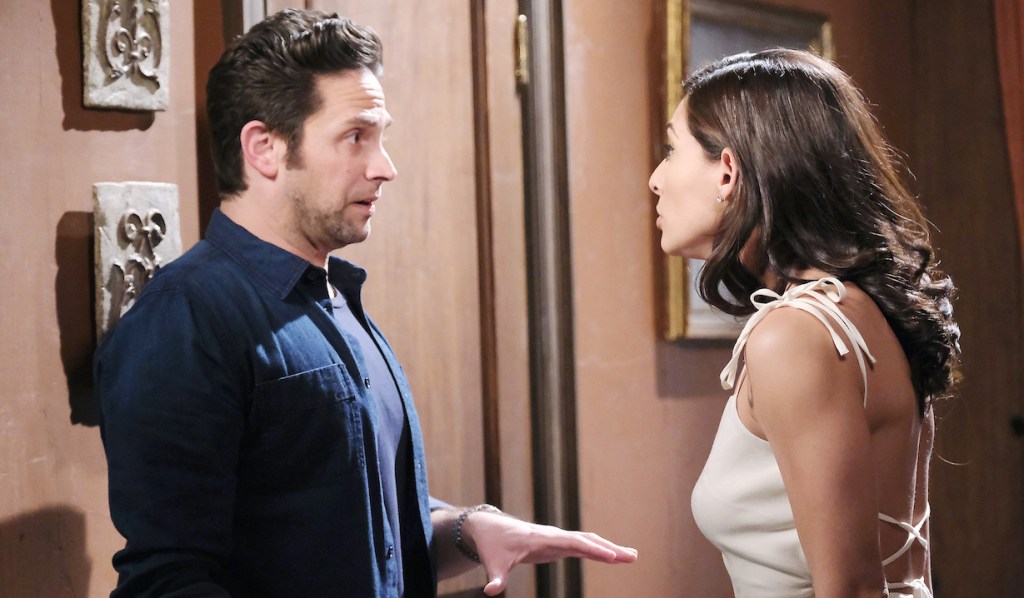 When Lucas comes to Jake and Kate’s room, he tells them EJ and Sami are moving in. Startled by the news, Jake leaves the room and runs into Gabi in the hallway. He wonders why EJ is home. Could he want DiMera back?

Chad tells EJ in the living room he won’t make a decision until he talks with his wife. Sami enters, prompting Chad to leave. EJ says being back at the family home is better than he ever imagined, especially with Sami by his side. It’s a new beginning for them.

Next on Days of Our Lives: Xander’s tactics with Dr. Snyder go awry and Brady confronts Nicole about her secret.

Relive 45 years of Marlena Evans in our photo gallery below. Then get your free daily soap-opera fix for Days of Our Lives — and all of the other daytime dramas — delivered straight to your email inbox by signing up for Soaps.com’s newsletter.

Furious With Chad For Allowing a...