Kate Wakes Up as Jake Kisses Gabi at Her Bedside — Plus, [Spoiler] Helps Kristen Escape Custody

Thursday, May 27, 2021: Today on Days of Our Lives, Kate panics when she wakes up, Kristen says goodbye to Salem, and Rafe questions Xander. 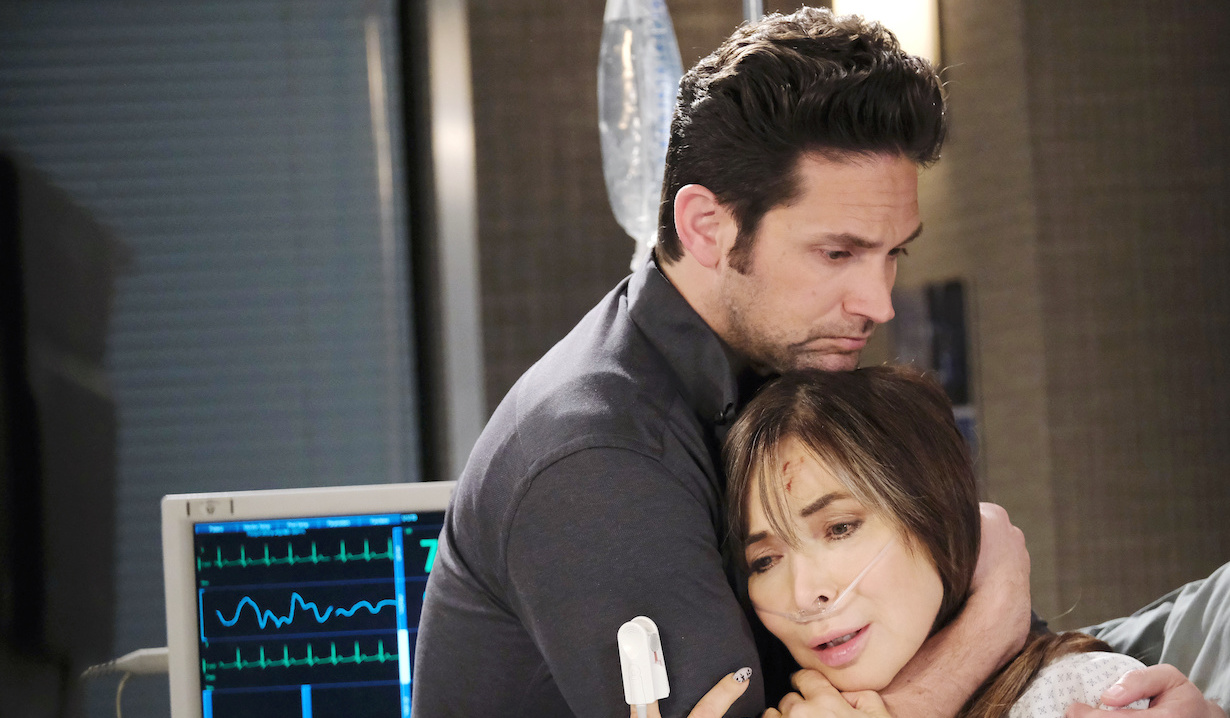 Kayla enters Kate’s hospital room as Jake sits by her side. She tells him the swelling on Kate’s brain has receded so they’ll start taking her out of the coma. However, they won’t know if she’ll have brain damage until she wakes up. She allows Jake to stay with Kate despite the fact they aren’t a couple any longer.

Alone, Jake grabs Kate’s hand and tells her she will always be important to him. He’s sorry he let her down. After bickering with Ava at Rafe’s place, Gabi walks in. Jake updates her on Kate coming out of her coma, assuring her nothing will change between them. He tells Gabi he loves her and moves in for a kiss. Kate wakes up. She can’t see. Kate doesn’t want Jake to leave her side so Gabi pipes up that she’ll get the doctor. Upset, Kate wonders why Gabi is there. Jake tries to calm her down and explains how she ended up in the hospital. The last thing she remembers is finding “Susan” at the mansion after she went shopping for their vacation. She says this kind of changes everything, doesn’t it? Jake holds her as he says, “Yeah, it does.”

More: Excited for God, frustrated over Deckerstar in Lucifer return 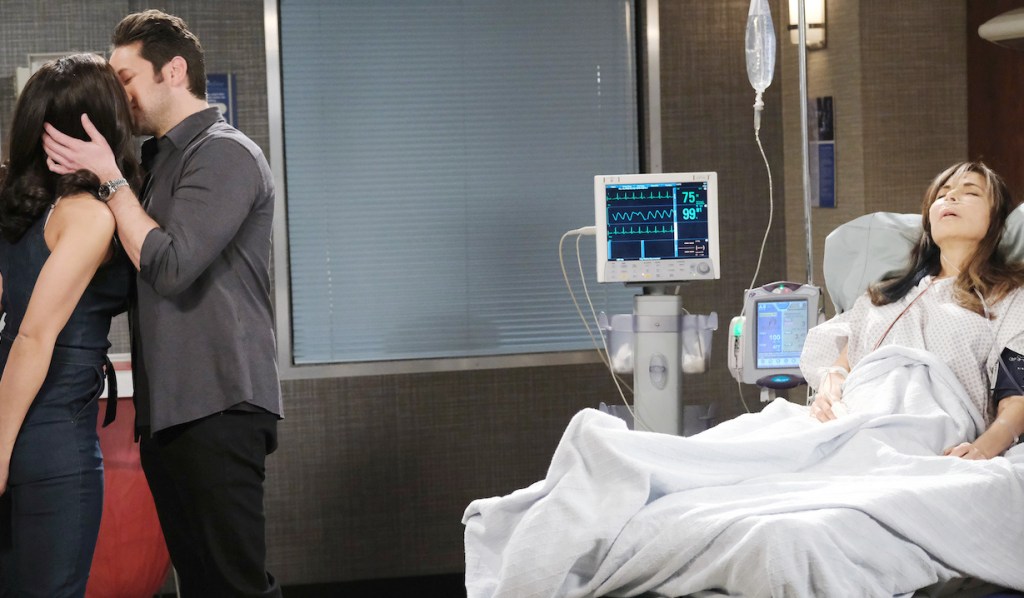 After her contacts and dentures have been confiscated, Susan paces the prison visitors’ room. Marlena enters to tell her she helped to secure her release. Dr. Evans gives Susan clothes to change into before they go home.

Brady returns to John’s place and tells him he just visited Kristen. John makes them coffee as Marlena and Susan enter. Susan jumps on Brady to apologize for going along with Kristen. Brady understands her heart was in the right place. He forgives her but can’t forgive himself just yet for what happened to Kate and Chloe. Susan goes to wash the Kristen out of her hair but Marlena can’t find her when she checks on her. 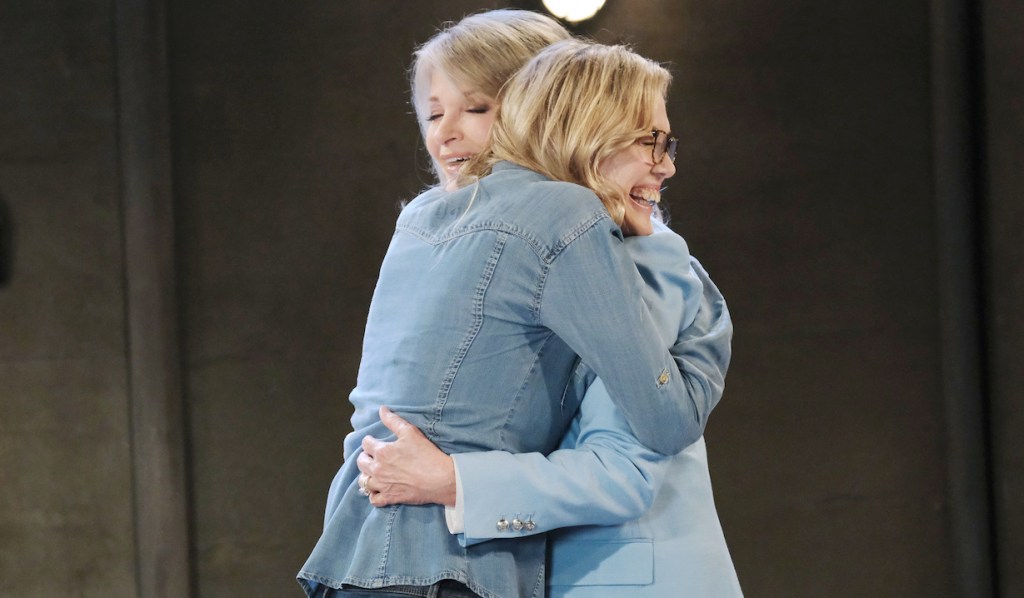 Chad bursts into the interrogation room wondering what the hell is wrong with Kristen for putting Kate in a coma and kidnapping Chloe. Kristen breaks down explaining she did it all for Brady. Chad isn’t impressed and rants about all her misdeeds. Kristen shouts that she doesn’t need a lecture. She needs his help to get out of there. When Chad wonders if she’s lost her mind, she plays the family card. Chad says they may be DiMeras, and he loves her as a sister, but he doesn’t condone what she did. Chad urges Kristen to find a purpose other than Brady Black while she’s in prison. She knows she has to find the good inside herself for Rachel. Chad knows it’s there and promises to be there for his niece. She asks for a pen and paper to write her daughter a note. 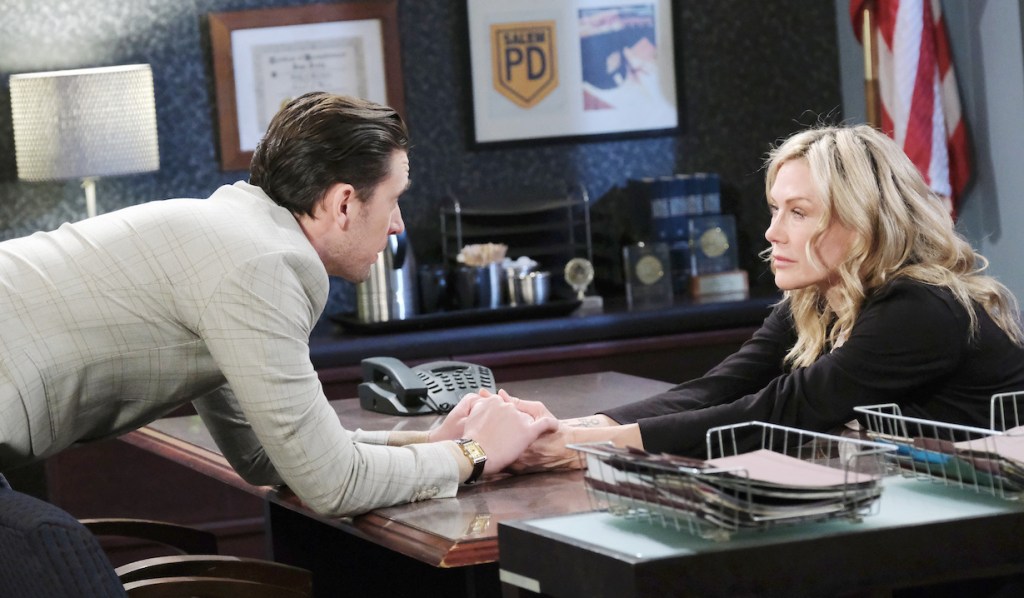 After Chad has left, Susan enters to confront her lookalike. Kristen knows she ruined everything and apologizes for what she put her through. Susan forgives her. Kristen hugs Susan and cracks her neck, causing her to pass out. After Kristen changes into Susan’s clothes, Ava walks in. Ava won’t let her escape. Kristen reminds her she had Rolf bring her back to life, so Ava owes her. When Ava still refuses, Kristen orders her to step aside.

Chad stops by the penthouse to give Brady the letter Kristen wrote for Rachel. Before he leaves, Chad warns them Kristen asked him to help her escape.

More: The Waltons are getting a holiday redo 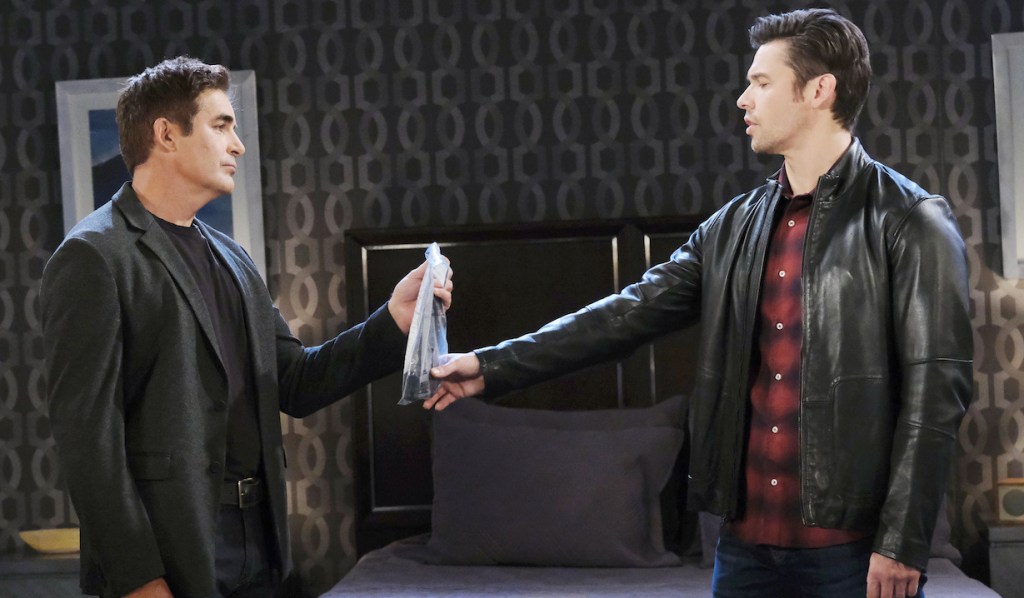 Rafe wonders what’s going on when he finds Nicole in Xander’s hotel room. They explain Xander asked her for a job. Rafe doesn’t think there’s any way Nicole would hire him considering their history. Nicole says she’s considering it, causing Rafe’s eyebrows to raise. He wonders what’s really going on. Nicole sticks to the story and then asks about Chloe. Rafe says they are looking for her and returns to lecturing her about Xander. He points out Xander tried to kill Sami and Lucas. Xander plays it off as Sami being a drama queen but Rafe wants to question him. Nicole leaves them to it but not before Xander reminds her to convince Brady to hire him.

Rafe shows Xander his gun in an evidence bag. Rafe warns he’s being investigated for attempted murder. Xander is confident he won’t find any proof of that. Rafe warns Xander to stay away from Nicole and leaves. 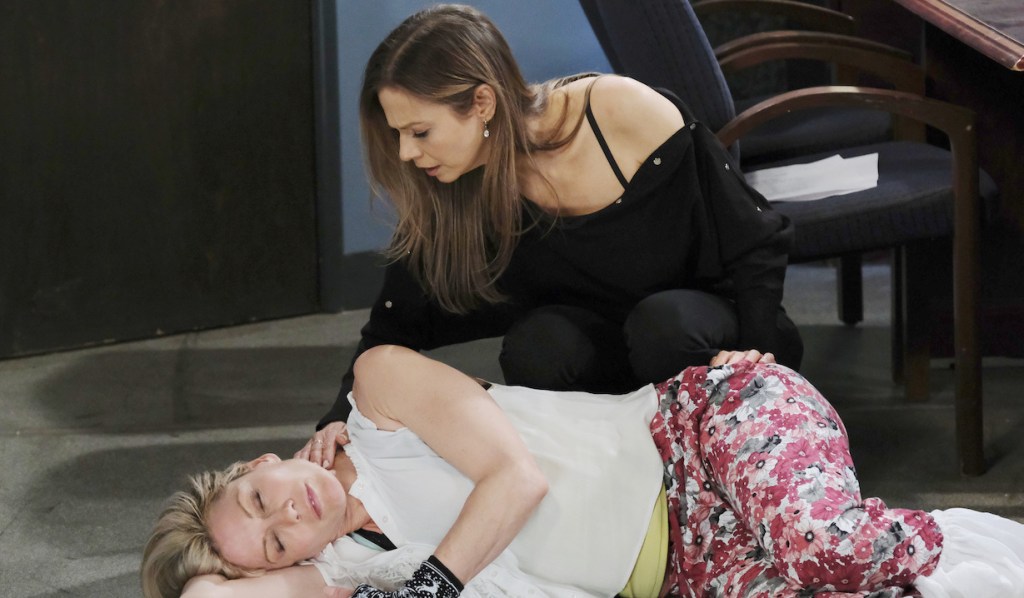 Rafe enters the interrogation room to find Ava hovering over Susan’s body. After Susan wakes up, Ava insists to Rafe she didn’t see Kristen. She claims she walked in and just found Susan on the floor.

In the park, Kristen revels in being free. She knows Brady will forgive her one day. He always does. She says, “You haven’t seen the last of me Salem.”

As Nicole visits Brady at the penthouse, she gets a threatening message from Xander. Nicole tells Brady she wants to hire Xander. Brady laughs and then says, “You’re out of your damn mind.” 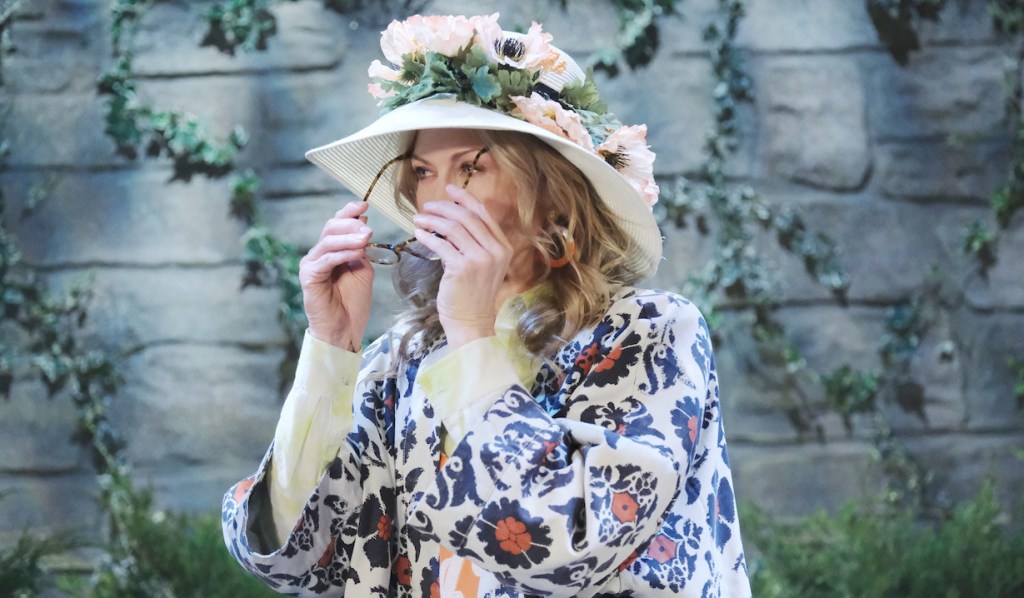 Next on Days of Our Lives: Sami grills Allie about Nicole and Gwen and Xander get acquainted.

Gabi’s got Rafe, Kristen has Chad, and soap actors have their own offscreen siblings. Look through our photo gallery of soap stars and their real-life brothers below and then get your free daily soap-opera fix for Days of Our Lives — and all of the other daytime dramas — delivered straight to your email inbox by signing up for Soaps.com’s newsletter. 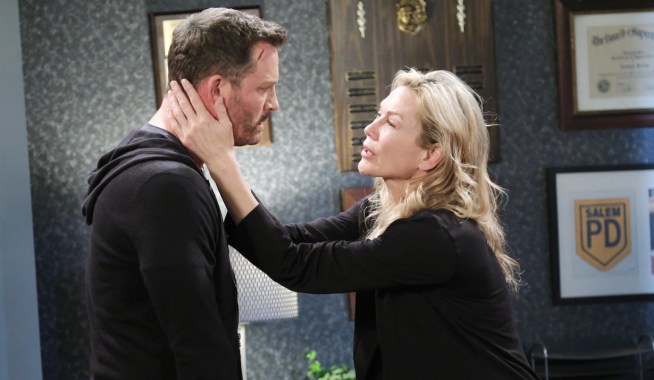 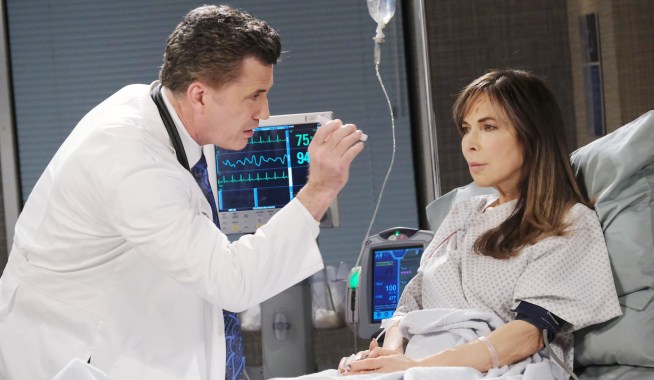 ‘Monarch’ Canceled At Fox After One Season