Wednesday, May 26, 2021: Today on Days of Our Lives, Kristen pleads for forgiveness with Brady, Jan finds Chloe, and Xander gives Nicole a deadline. 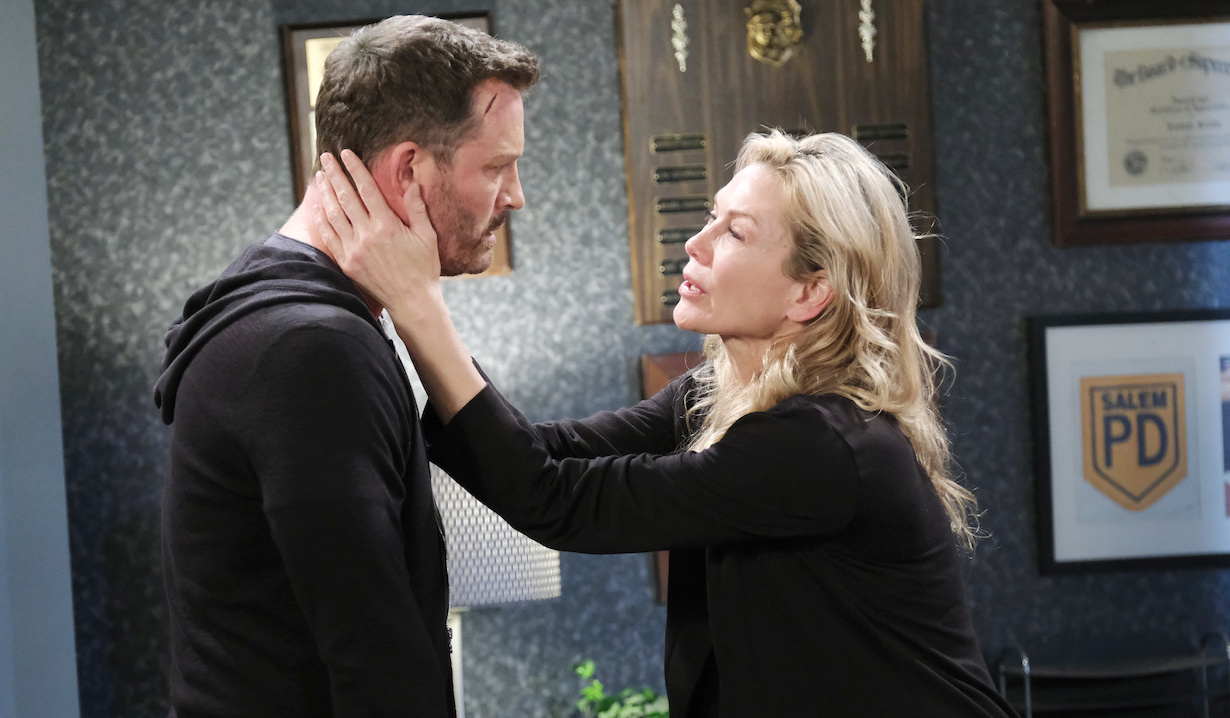 After Xander summons Nicole to his Salem Inn room, he vents about Sami double-crossing him. Now, he’s broke again. So… if Nicole doesn’t give him ten million dollars, he will tell Sami her suspicions about them sleeping together are correct. Nicole scoffs. She’ll just deny everything because there’s no proof. Xander smirks as he tells her someone was in the bathroom listening to them talk about their night together. Nicole doesn’t have that kind of money. Xander suggests she give him a job instead. 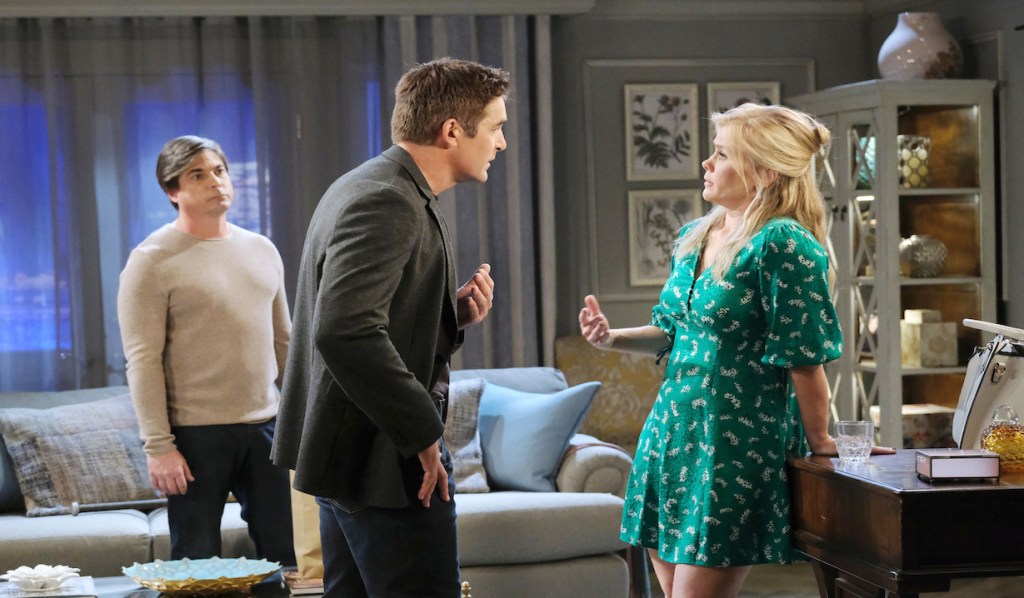 Fearing EJ is knocking on John and Marlena’s door, Sami tells Lucas to hide. Lucas declares he’s not scared of EJ DiMera and opens the door. Sami breathes a sigh of relief when they see Rafe standing in the hallway. He’s there to ask them about being held in the DiMera basement. Sami stammers around making it clear she and Lucas weren’t together, together. Rafe understands but he wants to know how they got mixed up with Kristen. After they bumble about with their stories, Rafe assumes there’s something they’re not telling him… like the fact that Kristen has something on them. Sami stonewalls, insisting she doesn’t know anything to help him bust Kristen or find Chloe. She then asks if he’s talked to Xander.

After Rafe leaves, Sami tells Lucas that while she doesn’t think Rafe knows they slept together, he’s definitely suspicious that they’re hiding something. “We’ve got to be smoother if we’re going to keep this secret,” she insists. They realize that the biggest threat to their secret coming out is Kristen. 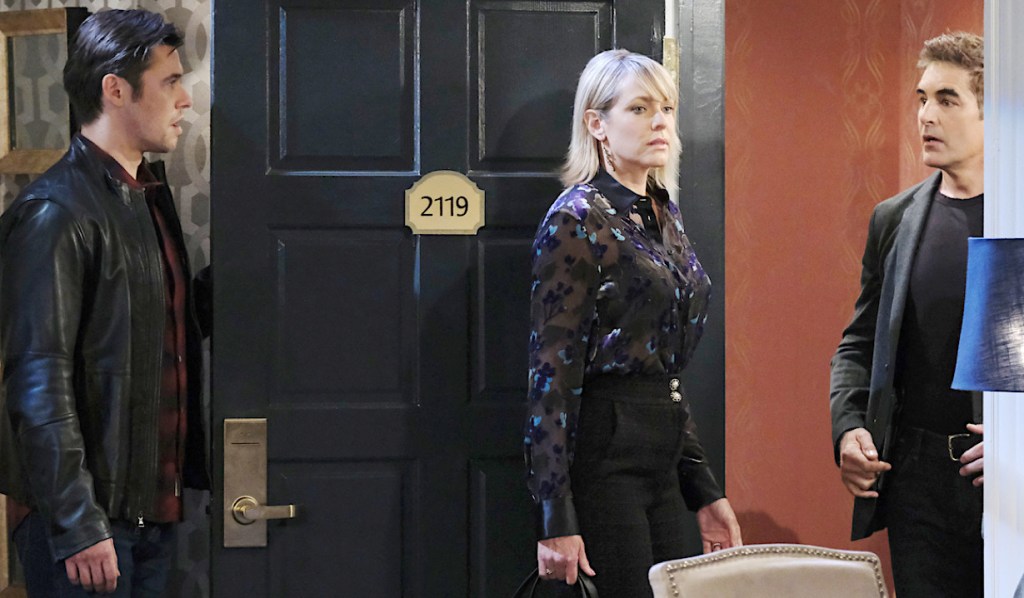 Back in Xander’s room, he gives Nicole 24 hours to convince Brady to hire him. Otherwise, he’ll call Sami and “spill the proverbial beans.” Nicole expresses how much she hates him. Xander points out she brought it upon herself by succumbing to his charms and hitting the sheets with him. As Nicole turns to leave, she opens the door to find Rafe.

After hearing a thump in the trunk while driving, Claire suggests they pull over to investigate. Jan blathers on about Belle and Shawn before agreeing to let her to pull over. She orders Claire to stay in the car while she opens the trunk to a bound and gagged Chloe. Chloe cries for Jan to help her. Jan says that’s not going to happen and slams the trunk shut. She returns to Claire who is shocked to learn Chloe is in the trunk. Claire begs Jan to call 9-1-1 anonymously, saying they can then leave the car and someone will help Chloe. Jan says they can’t do that because Chloe can identify her. Besides, she reminds Claire, “Two hostages are better than one!” 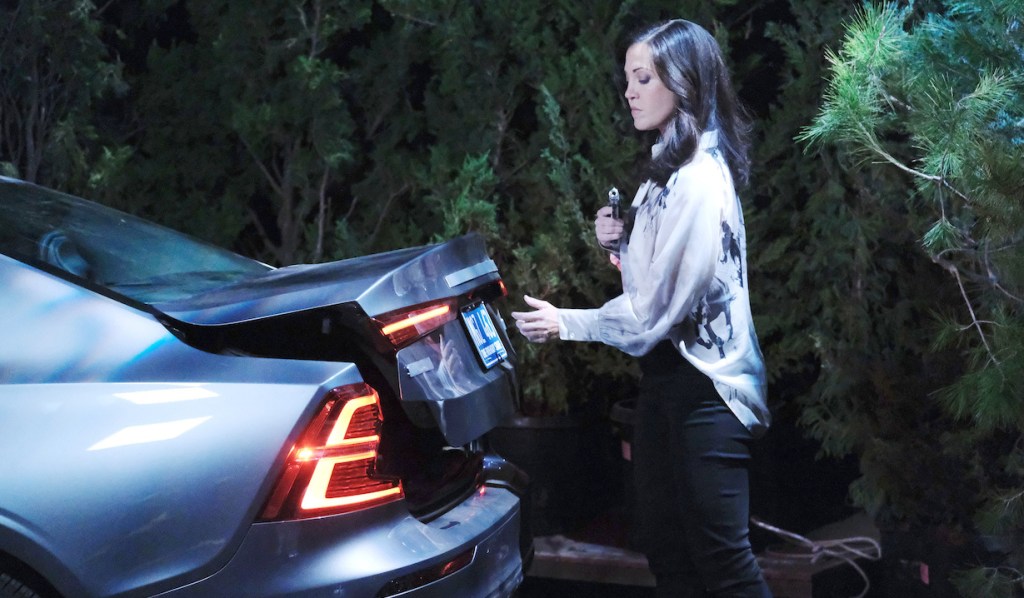 Philip returns to the interrogation room declaring the car Chloe is supposedly in isn’t where Kristen said it was. Kristen doesn’t understand, promising she told them the truth. Brady believes her. Philip calls him an idiot and leaves the room. After Brady rails at Kristen for going after Chloe, Kristen needs to know if he still loves her. Brady says, “Yes, I still love you. I will always love you.” Kristen cries. As long as he loves her everything will be okay. Brady clarifies that, yes, he still loves her, but he can’t be with her anymore. He was willing to wait for her while she was in prison but her obsession is too much. He thought it was in the past but it’s in their present and it will never change. He can’t do it anymore. Kristen begs him not to give up on her while pointing out Chloe tried to actively come between them. Brady says Chloe isn’t the reason he doesn’t want to be with her — Kristen is.

More: Victoria Konefal — before and after a ‘fat-ass meal’ 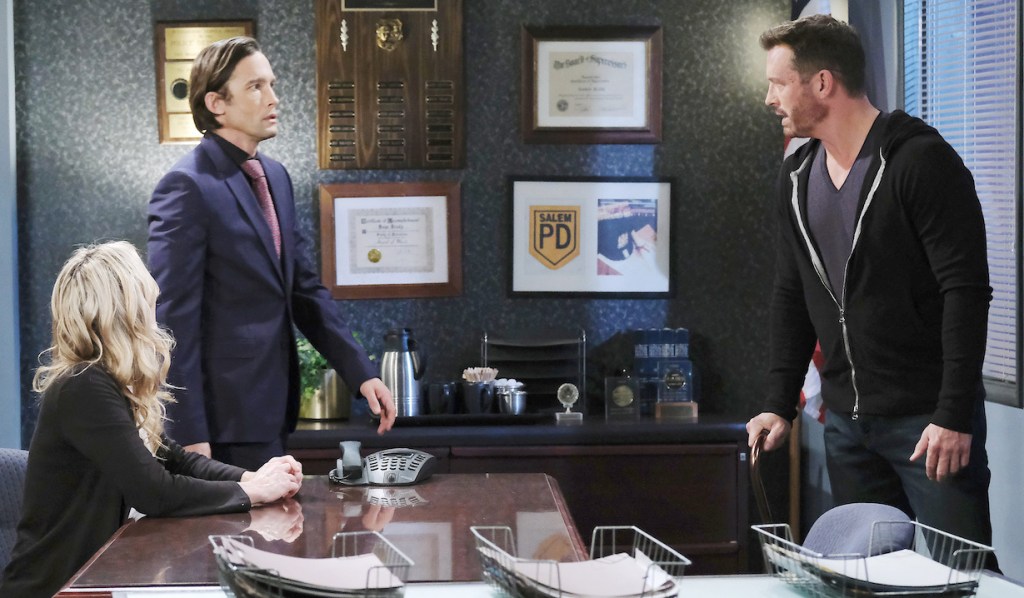 Kristen offers to go back to prison and pay for her crimes if Brady’ll give her another chance, but he’s not having it. She plays the Rachel card but Brady now sees her as a threat to his loved ones. “It breaks my heart, but for the sake of my family, my friends, and especially that beautiful little girl of ours, I have to end this.” Brady tells her it’s over for good this time. He walks away as she breaks down in tears.

In the squad room, Philip tells Shawn that Chloe is in a trunk of a missing car. Shawn is too preoccupied trying to find Claire. After he fills his uncle in on everything Jan’s done, Shawn explains Belle is confessing to murdering Charlie right now. It’s their only play with Jan. Philip knows he needs to focus on Claire but asks for access to security footage to find Chloe. As they look at the footage, Philip and Shawn see Jan holding Claire at gunpoint, forcing her to drive Kate’s car with Chloe in the trunk.

Next on Days of Our Lives: Kristen asks Chad for a favor and Gabi and Ava clash.

Are you a diehard Phloe fan? Look through our photo gallery below for reasons why Philip and Chloe should be together and then get your free daily soap-opera fix for Days of Our Lives — and all of the other daytime dramas — delivered straight to your email inbox by signing up for Soaps.com’s newsletter. 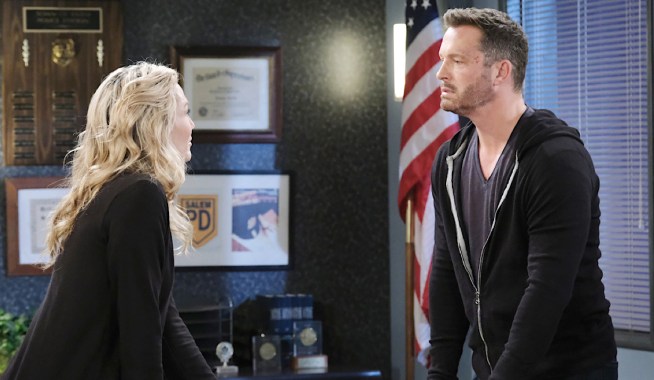 Kate Wakes Up as Jake Kisses Gabi at Her Bedside — Plus, [Spoiler] Helps Kristen Escape Custody 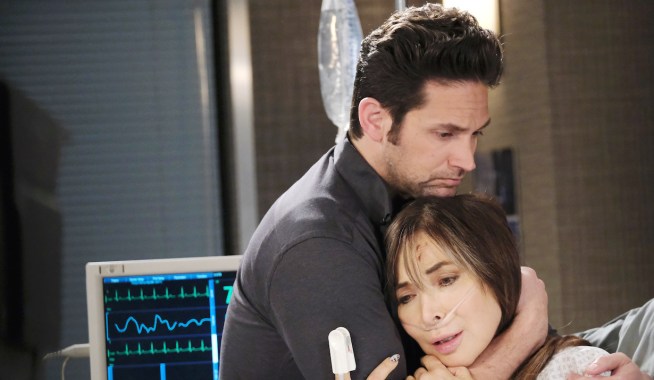